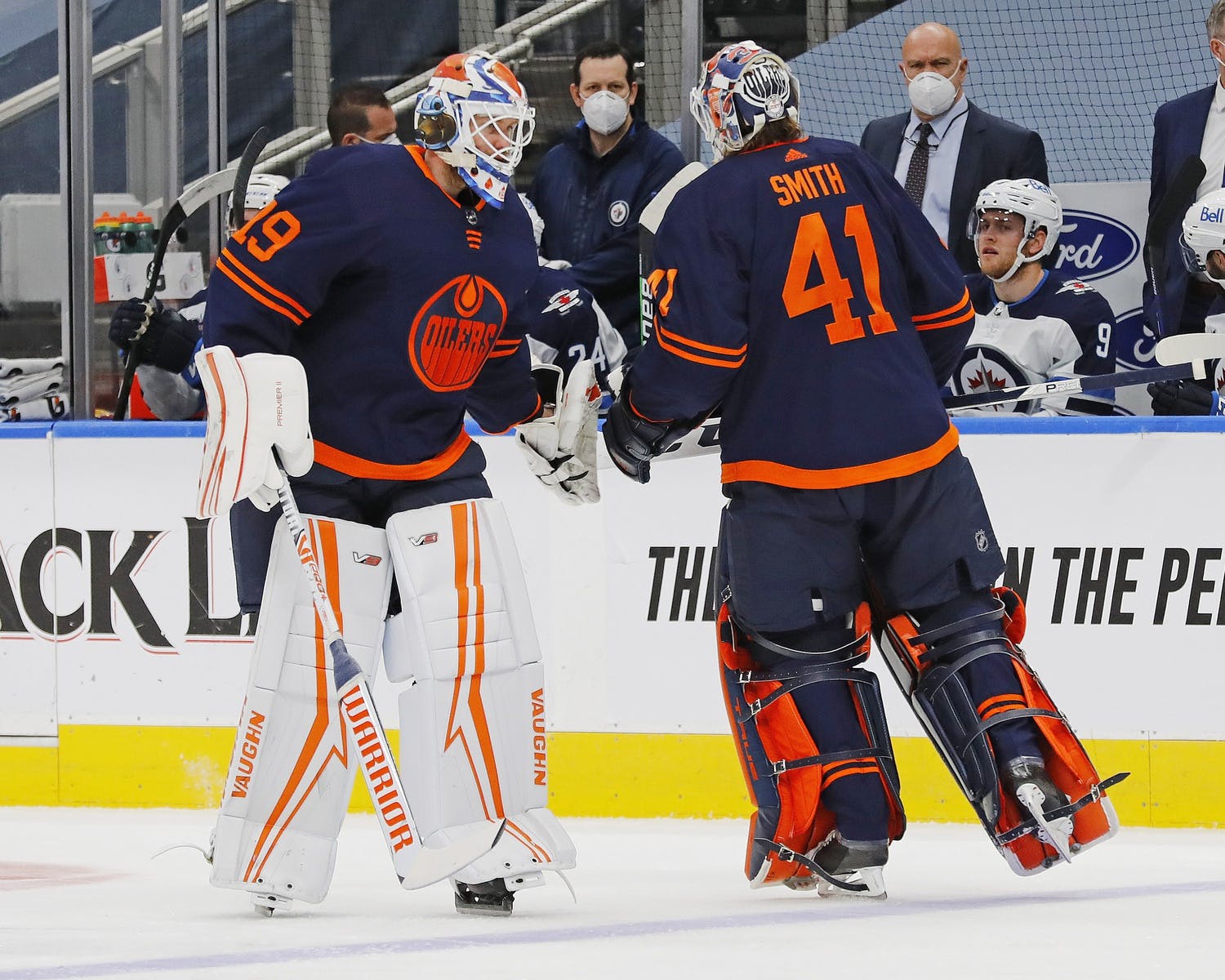 By Jason Gregor
1 year ago
I’m sure you’ve heard the following statement at least a thousand times this summer: “Mike Smith won’t be as good this season. He will regress.”
Quick question. Can you name the goalies who posted a .920sv% or better in 2020 and again in 2021?
I’ll give you a few moments to guess. Hit the play button below to heighten your experience.
Who did you guess?
Andrei Vasilevskiy? Nope.
Connor Hellebuyck? Nope.
Marc-Andre Fleury? Try again.
The correct answer is no one. Here are the top-20 goalies in Sv% in 2021 (min 900 minutes) and 2020 (min 1500 minutes).
And here is the top-20 from 2020.
In the past five seasons only six goalies have posted consecutive seasons with a .920sv% or higher.
Sergei Bobrovsky and John Gibson in 2017 and 2018.
Andrei Vasilevskiy in 2018 and 2019.
Robin Lehner, Ben Bishop and Anton Khudobin in 2019 and 2020. Khudobin and Bishop split time with Dallas both years, while Lehner played 2,600 minutes (44 games) with NYI in 2019 and 2056 minutes split between Chicago and Vegas in 2021.
It is rare for goalies to post consecutive .920+Sv% in consecutive seasons, so claiming Smith won’t have similar numbers isn’t that enlightening. It is expected.
I think a more accurate question would be: Can the Oilers goaltending be as good?
Last year they finished tied for seventh in the NHL with a .910sv%.
The Islanders were first at .921 followed by Vegas (.920), Carolina (.915), Nashville (.912), Boston and Winnipeg (.911), Edmonton and Florida (.910), Tampa Bay (.908) and Pittsburgh (.907) rounded out the top-10.
Edmonton was 14th in 2020 with a .905sv%.
Similar to individual goalies, the Islanders were the only team to have consecutive .910sv% seasons with .921 in 2021 and .910 in 2020. From year-to-year goaltenders, and the team defence will shift somewhat. Another reason I think it will be difficult to match last season’s Sv% for individual goalies and teams, is that offence could increase with the potential of more power plays.
According to Hockey-Reference.com, last season the overall league Sv% was below .910 for the first time since 2008/2009. And with a potential crackdown on crosschecks this season (I will believe it when I see it), then more power plays should result in more goals scored across the league. 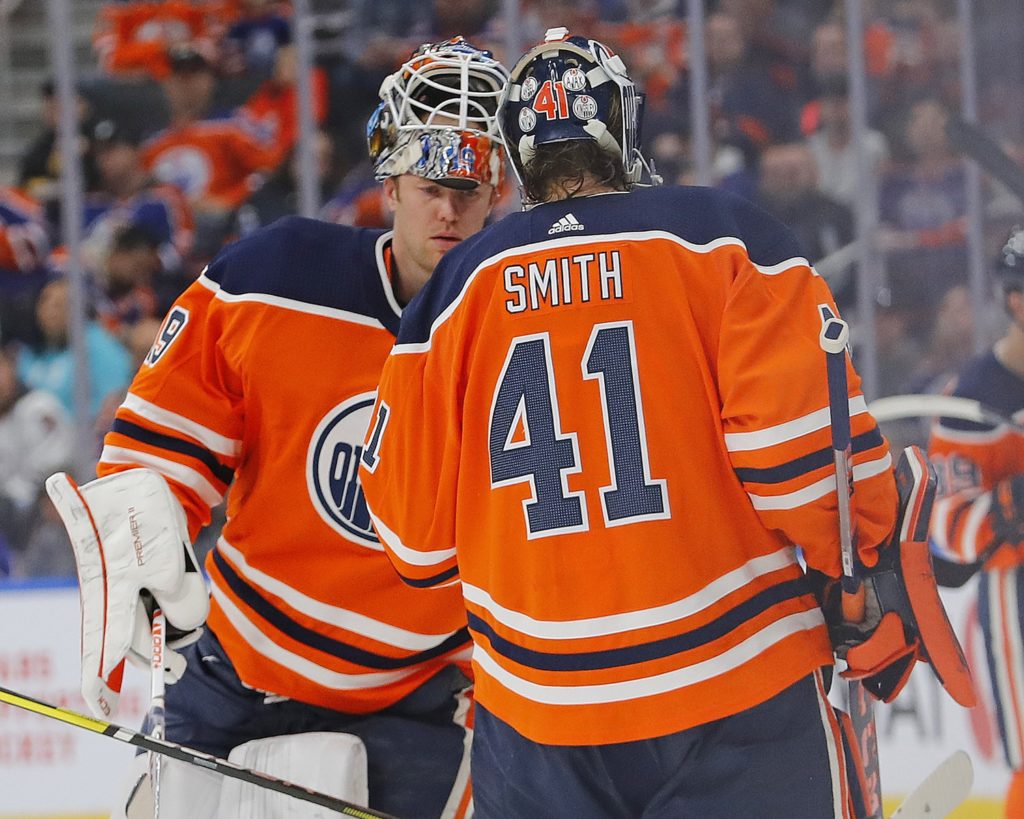 Oct 27, 2019; Edmonton, Alberta, CAN; Edmonton Oilers goaltender Mikko Koskinen (19) replaces goaltender Mike Smith (41) after Smith let in 3 second period goals by the Florida Panthers at Rogers Place.
Smith was seventh in Sv% last year and in 2020 Mikko Koskinen finished tied for 13th at .917sv%. If both are playing well, then the games started will likely be close to a split. If we expect Smith’s Sv% to dip a bit, should we also expect Koskinen’s .899sv% to increase? I think it is very plausible considering over the past two seasons the Oilers finished 11th in Sv% at .907.
Is it possible that some overreacted when discussing the Oilers goaltending the past few seasons? Yes. Koskinen struggled with first-shot jitters at times, and Smith in 2020 was on his stomach too much, but when you look at their overall numbers the past two seasons, they have given Edmonton solid goaltending. It might not look pretty at times, but if the goal is to stop pucks, then finishing seventh in 2021, and 14th in 2020, for an average of 11th over two seasons, then maybe the concerns about goaltending should be reduced a bit.
Yes, Smith is a year older, but he’s always been in great shape, and Kevin Woodley from In Goal Magazine reported two weeks ago that he was amazed at how good Smith looked when he watched him on the ice in late August. Woodley remarked how Smith has had more time to work on the changes he made in his game last year, and he looked even better.
The benefit the Oilers, and Smith, had last season was Smith got a lot of valuable off days due to the Taxi Squad and having a third goalie. How will they manage that this season? Will they use their practice goalie more? Would they carry three goalies at certain times?
They have a light October schedule with only seven games between October 13th to 31st and one set of back-to-back games in Arizona and Vegas. Smith will have ample rest time even if he starts five of seven, but if Koskinen, or Alex Stalock (if he plays great in preseason) play well in their starts, then Smith might only play four games.
Edmonton has 13 games in November, with two sets of BTB on 11th/12th and 23rd/24th. Smith starting eight or nine games is very doable.
December is a bit busier with 15 games, but only one set of BTB games. Starting nine games would allow for many maintenance days for Smith.
Edmonton opens the New Year on the second half of a BTB, but don’t have any other BTB games that month. They play basically every second day with two days off on 6th/7th and 23rd/24th. Another month with nine starts is reasonable and wouldn’t be that demanding.
They only play four games in February on the 2nd, 23rd, 26th and 28th. Two games in February would be wise.
So that’s 33-34 starts for Smith to this point.
March has 14 games, but only one set of BTB and they have no games on 6th-8th and 13th/14th. Seven or eight starts in March would allow for rest, and after over two weeks off in March, Smith should have time to re-energize.
Edmonton finishes the season with 14 games in the first 28 days of April. They have BTB on the 11th/12th and 15th/16th and three days off from the 17th-19th, meaning Smith will only play two games in 10 days between the 10th-19th. He could play three of five games between the 1st-9th and another three between 20th-28th.
That would put Smith at 48-50 starts.
Last year, Smith started 30 of 43 games between February 8th and May 12th, a span of 94 days.
My above split would be an even lighter work load with him starting 49 games in 200 days.
The Olympics break, combined with the season going to the end of April actually leads to more rest days than in a normal 82-game season, for those players not participating in the Olympics.
I don’t see the reason for major concerns regarding the Oilers goaltending. I could see Smith drop down to around .916 or so, but I could also see Koskinen improve from .899 to .910.
Edmonton doesn’t have a superstar goalie like Andrei Vasilevskiy, but that is more of a topic for the playoffs than the regular season for me.
Barring injury, I think the Oilers goaltending is capable of posting a combined Sv% around .907-.910, and if they do that the Oilers should easily have home ice advantage for the first round of the playoffs.