First impressions from around Oilersnation By Woz
3 months ago
With three Oilers games now in the books, let’s look at some first impressions from across the fantastic community we have on social media. Comments will be from TikTok, Twitter, and Instagram!

Tanja sums it up short and sweet. The fact is this is a shared sentiment among Oilers fans. The team has a bad habit of slow starts and the defense needs to be better. Simple but true. I’m interested to see how the coaching staff will fix the problem of slow starts.
Niemelainen. He’s been brought up as the man that many want to see more of in the Oilers’ lineup. And honestly, Nemo does provide a breath of fresh air with his height and physicality. Something the blue line does need more of.
Ted points out the Murray – Bouchard pairing. I 100 percent agree here. This pairing has struggled big time in these first two games at least. Interested to see how this will change. Team defense as a whole needs to improve, of course. What would you change with  Bouchard and Murray?

David Judd points out how we’re only four periods into Campbell’s five-year contract. Patience is needed and he’s still settling in, and freaking out about two games isn’t going to help anything. Besides, we still have 79 games left and I’m sure there have been plenty of teams in NHL history who didn’t have a perfect start and yet ended up succeeding in the end.

Janice here not putting the blame on Campbell. I will disagree that Campbell shouldn’t have played the full sixty minutes. After four goals against in such a short stretch, a goaltender’s confidence can diminish easily. Skinner came in and played extremely well. But yes the defense was BRUTAL versus Calgary. And yes, let’s not panic too early! 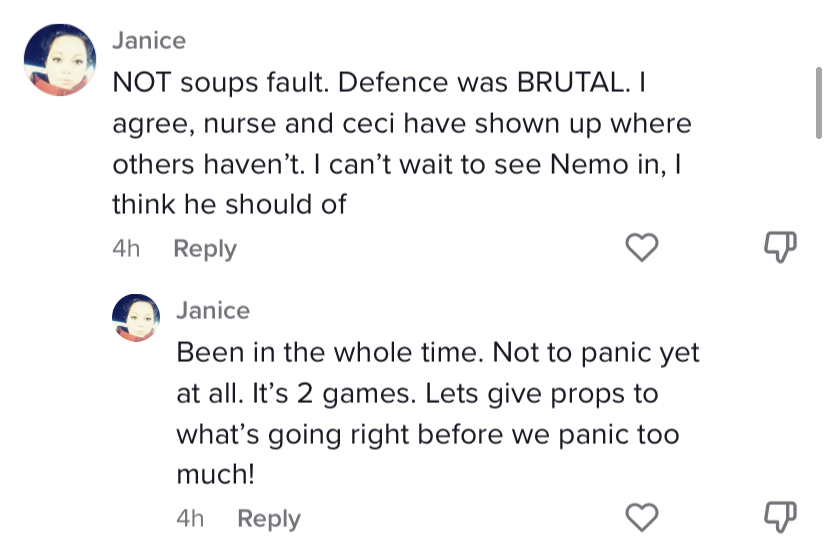 “I’m not mad about the loss I’m mad about the process” THIS! We are very fortunate to have an Oilers team that has the firepower that it does to be able to come back and keep itself in the fight regardless of the score. On the same note, starting late can become infuriating. For many it’s becoming a consistent trend that needs to stop.

Do we miss Duncan Keith? He definitely did add a different element on the ice and in the dressing room. No, he wasn’t the award-winning defenseman he once was but maybe the Oilers will miss his presence a little more than we think.

When does a trade happen on the blue line? or will it ever? we’ve heard rumours about Jakob Chychrun but does Holland have it in him to pull off a deal for a player like that? That’s what I question. Good to see more faith in the goaltending.

Thought this was a funny comment from Sarkmych on Instagram! Because like many of the comments on this article, we just want to see the team start on time! An issue we hope to see resolved sooner than later!

It’s still VERY early yet much of the frustrations lie with the defense and not as much with the goaltending. Sure, Jack Campbell could’ve done better on the Kadri goal against Calgary for example however the defense has made many mistakes in front of him. And let’s hope going forward the team can start the game much better for a change. Thank you to everyone who left comments!
Oilers Talk
Recent articles from Woz