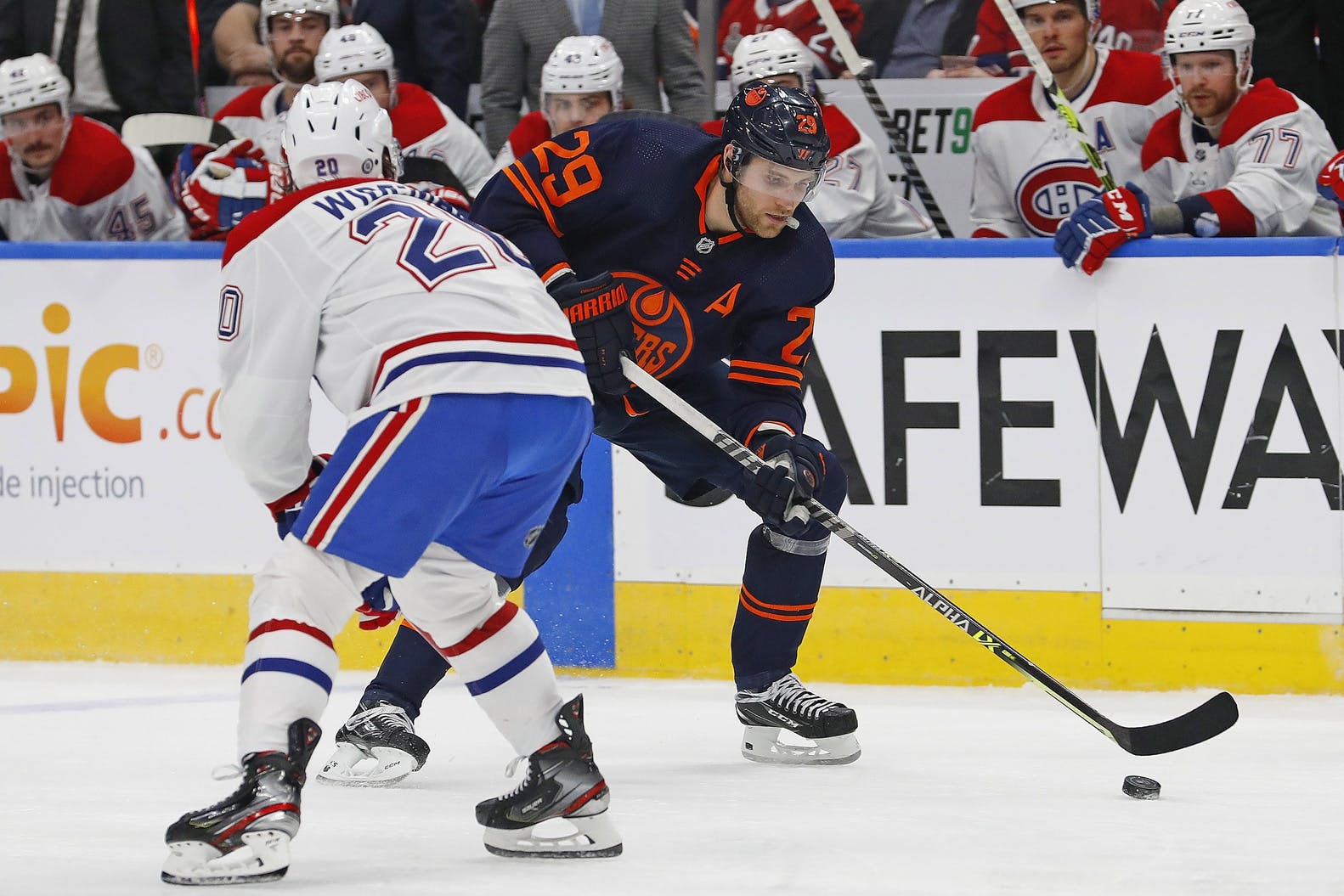 By baggedmilk
1 month ago
Be sure to check out the latest Oilers game day odds from NHL betting site Betway
When I think about the Montreal Canadiens coming to town, the immediate thought that pops into mind is how Rogers Place is going to be half-full of Habs fans and how annoying that can be for anyone in attendance. As much as I respect the hustle of flipping your tickets to a Canadiens fan for profit, the fact that we’ll have a bunch of ‘ole oles’ going all night in our home barn is a tough pill to swallow, and it will be up the Oilers to make sure that everyone in a Montreal sweater has a bad time. Despite similar records on the season, I truly believe that the Oilers should beat the Canadiens, and making that belief a reality will require a bunch of the boys to step their games up. With injuries littered throughout the lineup, the Oilers need to win without the help of some key pieces and that presents an interesting challenge for a team that has struggled to find its way. But at 6-4-0 in their last 10 games, the Montreal Canadiens aren’t about to roll over and show the boys their bellies, and rather than being a freebee on the schedule, they’re turning themselves into a bit of a problem.
If the Oilers are planning to win the first of two meetings with the Canadiens, the most obvious first step will be playing with a whole lot more energy and urgency than we got in Minnesota. I know the boys were on their third game in four nights, but they really struggled to keep their legs moving and it allowed the Wild to take over as the night wore on. I’m hopeful that a couple of nights in their own bed and an extra large pre-game coffee will be just what the doctor ordered. And as we all know, Rogers Place is going to be a potentially hostile environment with all of that red in the stands, and if the Oilers can’t get fired up for a night like then we have bigger problems to worry about. Not only do we need these points as the boys continue to chase down the top-three teams in the division, but the last thing I’m interested in is having all of our Saturday nights kicking off with a bunch of ‘ole ole’ chants echoing through our barn. It can’t happen. Get a good start, commit to defence, and send Habs fans home unhappy and with fewer dollars in their jeans. One shift at a time.
Let’s see what the numbers say.

Draisaitl – McDavid – Hyman
Janmark – RNH – Puljujarvi
Kostin – Shore – Ryan
Holloway – Malone – Benson
Nurse – Ceci
Kulak – Barrie
Broberg – Bouchard
Skinner
No doubt about it, the Oilers are banged up right now so I’m curious to see if Jay Woodcroft makes any changes in response to a disappointing result against the Wild on Thursday. With four players in the top nine already out (Kane, Yamamoto, McLeod, Foegele) and the rest of the team battling with inconsistency, we’re getting another very real test of what we’re made of at a critical point in the season, and we’ll need some unlikely heroes to step up and fight beyond their weight class.

Caufield – Suzuki – Dach
Dadonov – Dvorak – Armia
Stafkovsky – Monahan – Anderson
Pezzetta – Evans – Pitlick
Matheson – Savard
Edmundson – Guhle
Harris – Xhekaj
Allen
Even though the Montreal Canadiens have scored 15 fewer goals than the Oilers have so far this year, they’ve also given up less than we have too. The Canadiens may not score as much as Edmonton but they do a better job of keeping the puck out of their net, and that’s not exactly a compliment for the team that ranks 22nd overall in goals against. I’d much rather be in 22nd than in 27th place in goals against like the Oilers are right now, ya know? The point here is that the Oilers can win this hockey game but they can’t play as loose in their own end as they did against Minnesota or we’re in for a long night.
BTW these line combos aren’t accurate so don’t put too much weight into them yet. I’ll update as news comes out.

From Habs Eyes on the Prize:

When the Montreal Canadiens lost to the San Jose Sharks on Tuesday, it was after 60 minutes of hockey where they probably did enough to win. The complete opposite was true on Thursday, as the Calgary Flames dominated the Habs from pillar to post, but the hockey gods karmically willed the Tricolore to a win.
And the hockey gods used Jake Allen as their instrument of karma.
Allen was nothing short of magnificent against the Flames. Facing 46 shots, he stopped all but one, which was a scramble play at the side of the net following a missed interference call. It was reminiscent of Carey Price’s best works in the way that he took over the game, and presented a puzzle far too complicated for Calgary to solve.
It is fair to wonder if this is something the Canadiens should want at this stage of the rebuild. Winning games they deserve to lose won’t help their eventual draft lottery odds, nor help them avoid being dominated as they were. It makes for great television from a fan perspective, but Allen’s brilliance almost seems wasted on a rebuilding team.
He deserves a shot with a contender, and the Habs should be looking to give him that shot. Performances like that should attract some attention from teams that need help at the goaltender position, which he clearly provides. If he can commit highway robbery like that, it should be in service of a team that is going to the playoffs.
If they don’t find a trade partner, we all may have to accept that he’s going to pull off some robberies like this. While they may not be good for the draft position, at least they make for a very fun watch for his teammates and all of us at home. 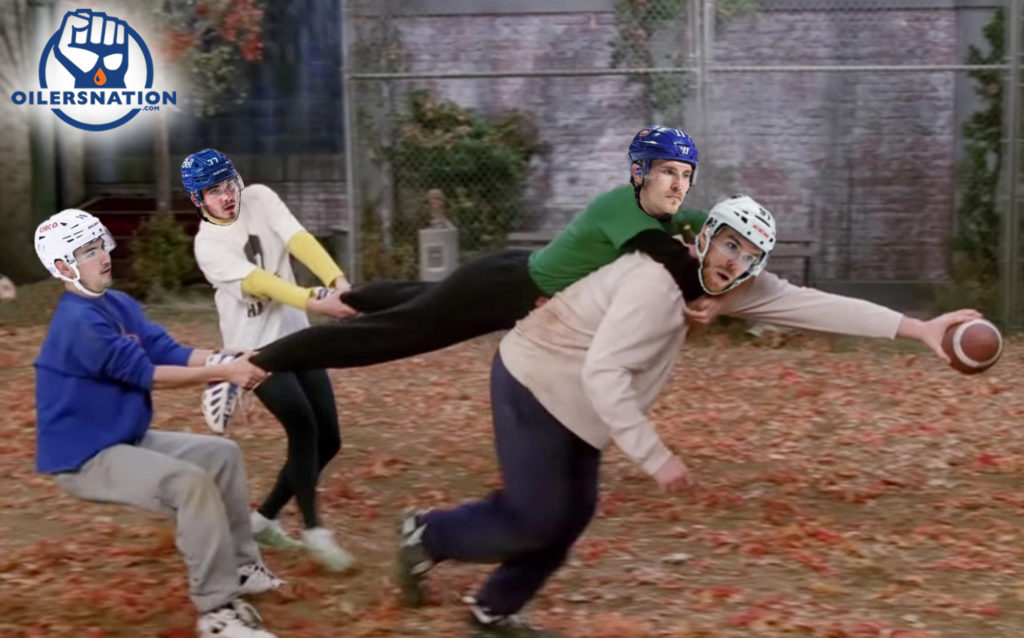 Featured
GDB 50.0 Wrap Up: Matt Berlin is an NHL goaltender as the Oilers roll the Blackhawks 7-3
Do Not Sell My Info
Privacy Settings