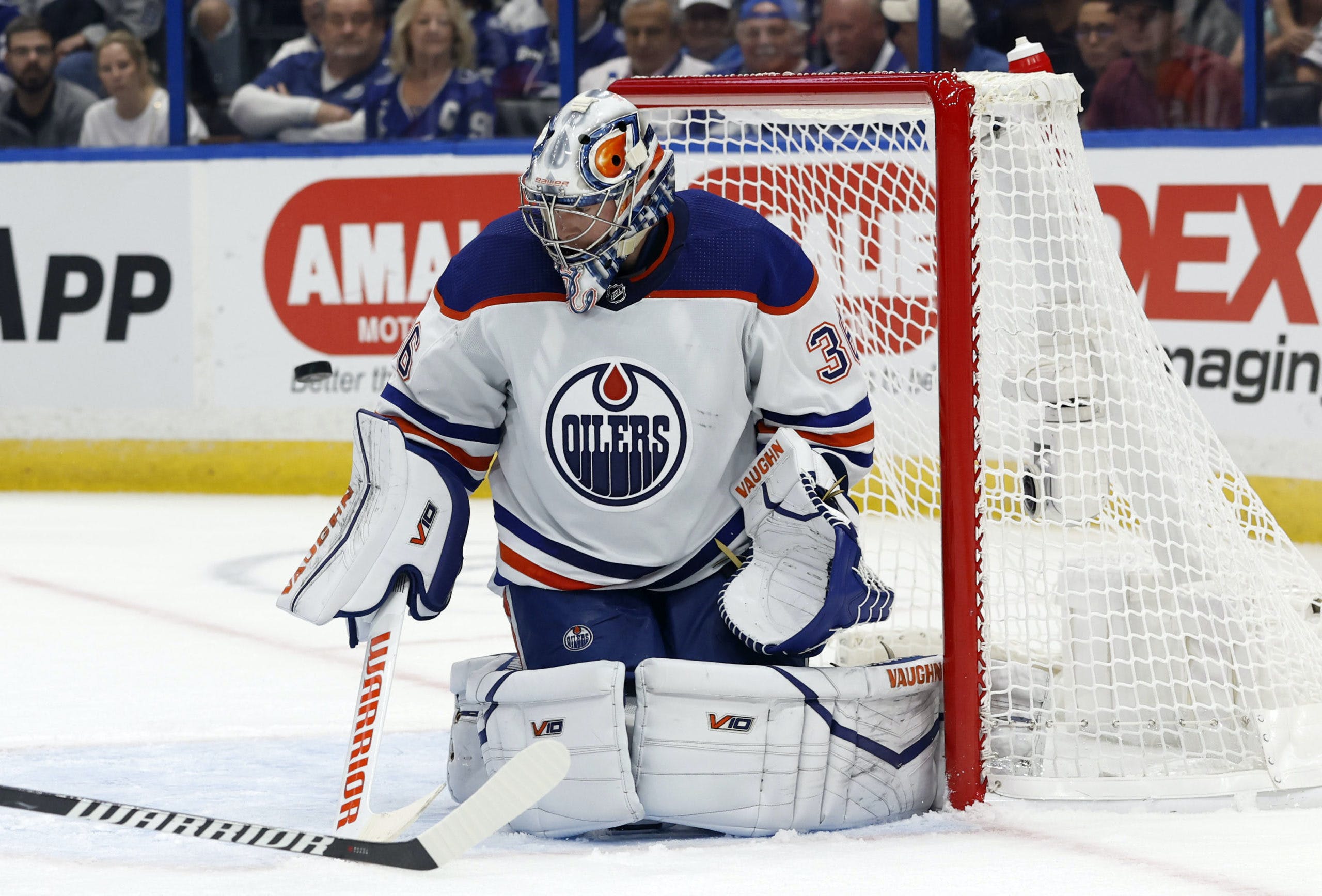 By Jason Gregor
1 month ago
Be sure to check out the latest Oilers game day odds from NHL lines site Betway
Jack Campbell’s first two months with the Edmonton Oilers has not gone according to plan. Campbell signed a five-year, $5m AAV contract to be the Oilers starting goalie. He started 10 of the first 15 games, but he struggled with a .873Sv% and 4.27 GAA. He was 62nd among all NHL goalies with a -1.16 in saves above expected. The Oilers did manage to go 6-4 in his 10 starts, but Campbell’s early-season struggles saw him losing his starting job as Stuart Skinner has started 11 of the past 14 games.
Campbell gets another chance to regain his form and confidence tonight in Nashville. His previous three starts since Skinner became the starter weren’t much different than his first 10. Campbell posted a .869Sv% and 3.67 GAA and -1.19 saves above expected. He last start was December 1st, and since allowing five goals to the Wild he has worked hard in practice to refine his game.
Tonight, he gets to test himself in game action and see if the extra work has paid off. He, the Oilers, and their fans are hopeful it will.
The first 13 games of Campbell’s tenure in Edmonton have been, to put it mildly, disappointing. He can’t change that, so now it is all about moving forward and improving. Campbell plays differently than most goalies. There is a lot more flow and feel to his game. At his best, he has more movement in his game than most modern goalies.
Opposing teams have targeted his post play and post integration by firing pucks from sharp angles and in his feet.
So much of Campbell’s game stems from his confidence. When a goalie’s feel is off you start giving up depth in traffic. Off the rush a goalie who is lacking confidence won’t hold their ice, and drift and flow back too quickly which make a goalie vulnerable to getting beat. We saw this in his last game v. Minnesota on the Freddie Gaudreau goal where Campbell backed in too far and gave up the entire top of the net.
Much of Campbell’s issues have come from allowing goals in bunches. He will play well to start the game, but then one goal is scored and suddenly it is two or three in a period. I view that as confidence more than technique, and as the confidence wanes, then backing in too quickly or making himself small follows.
In his last start v. Minnesota, he started well, but then the Wild scored four goals in 20 minutes from the middle of the second to middle of the third period.
He had a solid first period vs. the Rangers, even with an unlucky early goal, but then he allowed two goals in 34 seconds.
Against the Islanders, he had a great first period stopping all 12 shots, but then the Islanders put three by him in the second.
Had a very good start in Carolina, but they scored with 20 seconds remaining and then score three in the second period. On the Jordan Staal goal Campbell was deep and flat.
Campbell’s struggles are a mix of lacking confidence and some technical details, but so much of his game is based on how he feels. When he lacks confidence, it shows in his play. When he allows a goal, he can’t let it turn into two or three. Have a short memory. Be confident, even cocky, and believe you aren’t letting in the next one. Of course, every goalie allows “the next one” sometimes, but Campbell needs to limit goals in bunches.
I’m curious to see how he fares tonight. It would be a huge boost for the Oilers if they could get two goalies playing well.

Draisaitl – McDavid – Hyman
Janmark – RNH – Yamamoto
Kostin – Shore – Ryan
Holloway – Hamblin – Puljujarvi
Nurse – Ceci
Kulak – Barrie
Broberg – Bouchard
Campbell
After getting great production from lines 2-4 in the first five games in December, last night all three were quiet mustering a meagre two shots combined at 5×5. The top line was also quiet at 5×5, and all four will need to create more tonight. We could see Brad Malone draw in tonight up front. Ryan Murray hasn’t played since November 21st, but Philip Broberg has been solid, but not spectacular, so does it help them to slot Murray in? If he plays it is simply to keep him involved. I don’t see him as an upgrade on Broberg right now.

Forsberg – Granlund – Duchene
Niederreiter – Johansen – Scissons
Trenin – Parssinen – Jeannot
Smith – Glass – Jankowski
Josi – Gross
Ekholm – Fabbro
Gravel – McKeown
Lankinen
The Predators’ blue line has been decimated by injuries. Ryan McDonagh and Mark Borowiecki are on injured reserve. Alex Carrier and Jeremy Lauzon left Saturday’s game vs. Ottawa with injuries and didn’t play last night. The Predators recalled Kevin Gravel (former Oiler) and Roland McKeown. Gravel played three games with Toronto in 2019-20, before returning to the Show last night. McKeown played 10 games for Carolina in 2017-18 but hadn’t returned until yesterday. Jordan Gross is playing on the top pair with Roman Josi. Gross has 16 games of NHL experience split between Arizona (9 in 2020 and 2021), Colorado (one last year), and six with the Predators this season.
Edmonton has no excuse not to generate some quality chances tonight. 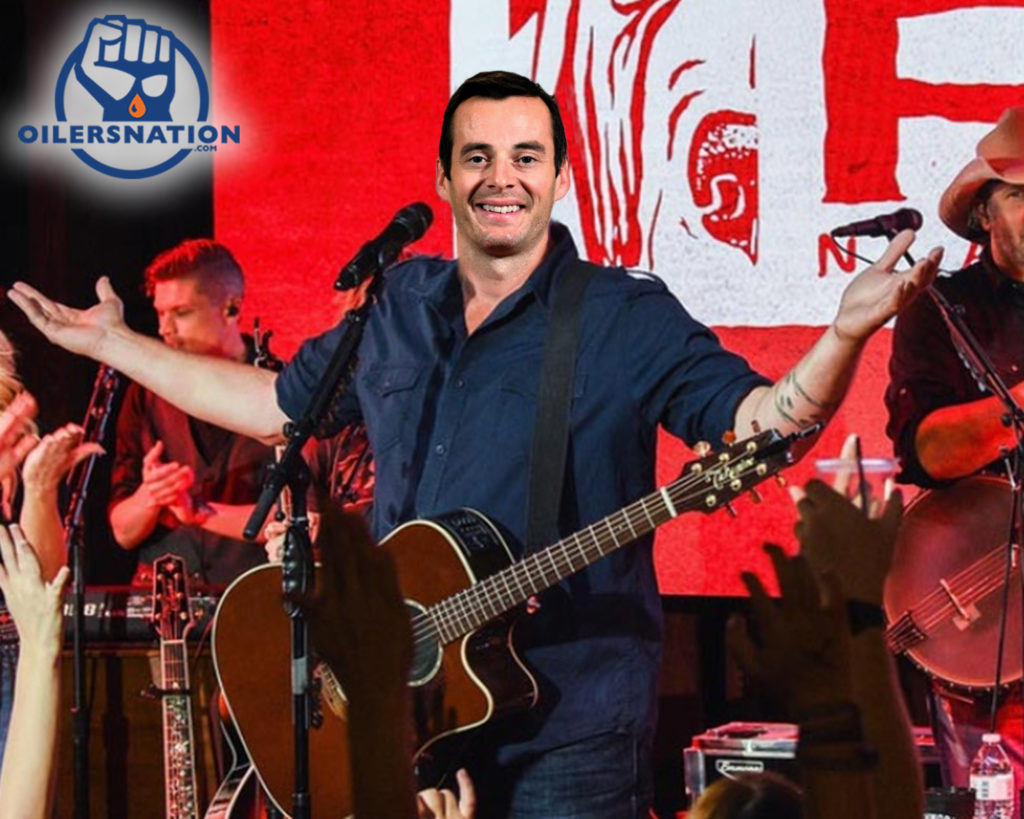 Thanks to Tim for his awesome bid on the Oilers/Kraken suite yesterday.

Ultimate Streaming! Smart! Gaming Optimized! Ultra Large 4K LED Display! Voice Control! 75 Inches! Separate accounts and personalized recommendations for everyone, plus built-in Netflix, Prime Video, Apple TV, Disney+ and HBO Max. A slim design, minimal bezel and small footprint allow it to fit almost anywhere. Mount it on your walls or set it on a TV stand. Control the TV with your voice via Amazon Alexa and Google Assistant, already built in. Browse the web and enjoy Sports Alert to keep tabs on hockey or football. Feel the bass, enjoy epic gaming and cinema-like experiences all on a bigger, brighter and crystal-clear screen.
You can bid by calling 780.444.1260 or text 101260 between 2-6 p.m. today as we support The Christmas Bureau.
Editorials
Featured
Oilers Talk
Recent articles from Jason Gregor