By Jason Gregor
1 month ago
Be sure to check out the latest Oilers game day odds from NHL lines site Betway
The Edmonton Oilers started the season 7-3, but then slumped to 3-7 in their next 10, before rebounding with a 7-3 record over the past 10 games. Their recent run has them going in the right direction, but they need to avoid another 180 degree turn.
Here is a look at the three 10-game segments thus far. It is pretty clear where they struggled in the middle set.
They got crushed 5×5 in the middle 10 games getting outscored 27-12. Their 5×5 play in the other 10 game sets has been pretty solid with them allowing 1.7 and 1.9 goals against/game. If you do that, you win games. It is that simple. A good goals against 5×5 is the one constant that winning teams possess. Some might not be great on special teams, or don’t have elite 5×5 scoring, but outside of the rare outlier, 5×5 goals against is the one stat that winning teams have in common.
The Oilers’ penalty kill hasn’t found success at any point this season. It needs to improve, but even at 73% in the first and third sets, the Oilers still won because they have a great power play and they outscored teams 5×5.
Their next 10 games are against St. Louis, Anaheim, in Nashville and Dallas, home to Vancouver, then the Christmas break. They return with games in Calgary and Seattle and home to Winnipeg, Seattle and the New York Islanders. The Oilers have only played five divisional games thus far, and have five in their next 10, before playing 18 of their final 42 against divisional foes. Those games will go a long way in determining where they finish in the Pacific.
The Blues aren’t a divisional foe, but they are in their conference and while the Blues are struggling now, it is too early to write them off. I’m sure everyone remembers 2019. But a regulation win tonight would give Edmonton a nine-point cushion over the Blues. It is never too early for teams to create some breathing room in the standings.
The middle 10-game sequence for the Oilers was quite an outlier to the other 58 games since Jay Woodcroft arrived. In those 58 games the Oilers outscored teams 140-109 at 5×5 and 229-167 overall. For 58 of 68 games with Woodcroft the Oilers have been a dominant team going 40-15-3.
They haven’t been as solid defensively this season, specifically against the rush, but the 11-20 games this season were so bad it has made their overall 5×5 play look worse than it is.
They seem to have regained their confidence the past 10 games, and with Skinner giving them solid goaltending the Oilers should be able to keep winning at a good clip, as long as they remain committed to eliminating the glaringly bad giveaways or defensive reads.

Draisaitl – McDavid – Hyman
Janmark – RNH – Yamamoto
Kostin – Shore – Ryan
Holloway – Hamblin – Puljujarvi
Nurse – Ceci
Kulak – Barrie
Broberg – Bouchard
Skinner
Stuart Skinner will make his 17th start of the season which would tie him for 22nd. Edmonton, Florida, Ottawa and Vancouver are the only teams with two goalies who have made 14+ starts. Meanwhile Buffalo, Carolina, Chicago, Columbus and Toronto don’t have a goalie who has made 14 starts yet. Injuries to their goalies have forced them to use three, or more, goalies.
Of the 31 goalies with 14+ starts Skinner ranks sixth in Sv%, 15th in GAA and is still first in saves above expected from Clear Sight Analytics. He has given Edmonton very consistent goaltending.

Saad – O’Reilly – Leivo
Buchnevich – Schenn – Tarasenko
Barbashev – Thomas – Kyrou
Toropchenko – Acciari – Pitlick
Leddy – Parayko
Krug – Faulk
Mikkola – Bortozzo
Binnington
It is hard to comprehend why the Blues are 23rd in GF/GP (2.90) and 29th in GA/GP at 3.72. They have essentially the same forwards as last season when they were the third-highest scoring team in the league. I didn’t expect them to be top three again, as many players had career years, but to struggle this much in both ends of the ice has been a surprise. Not only is their offence down 0.87 goals/game from last year, they are allowing 0.81 more goals against/game. Ville Husso leaving to Detroit is a factor, but he had little impact on the offence.
They had nine forwards and three D-men with 35+ points last year. Their forwards all had 49+ and only David Perron is elsewhere. Only Pavel Buchnevich is producing at a similar clip to last year. He’s at 1.00 pts/game this year after scoring 1.04 last season.
You’d think their offence will improve at some point, but the Oilers need to ensure they don’t give them too many chances to gain offensive confidence tonight. 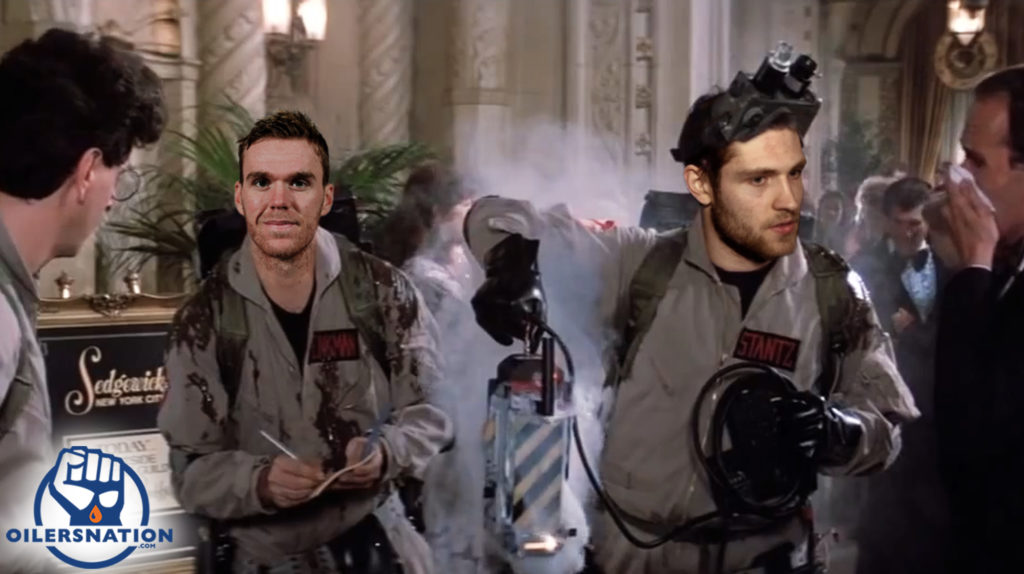 Thanks to Jesse and Steve for their great bids on the Michelle Derk Realtor package and the golf package from Eagle Rock.
DAY 11: Five Course Meal at Chop Steakhouse

You can bid by listening to TSN 1260 and calling 780.444.1260 or text 101260 between 2-6 p.m. today. All proceeds will help out The Christmas Bureau.
Editorials
Featured
Oilers Talk
Recent articles from Jason Gregor