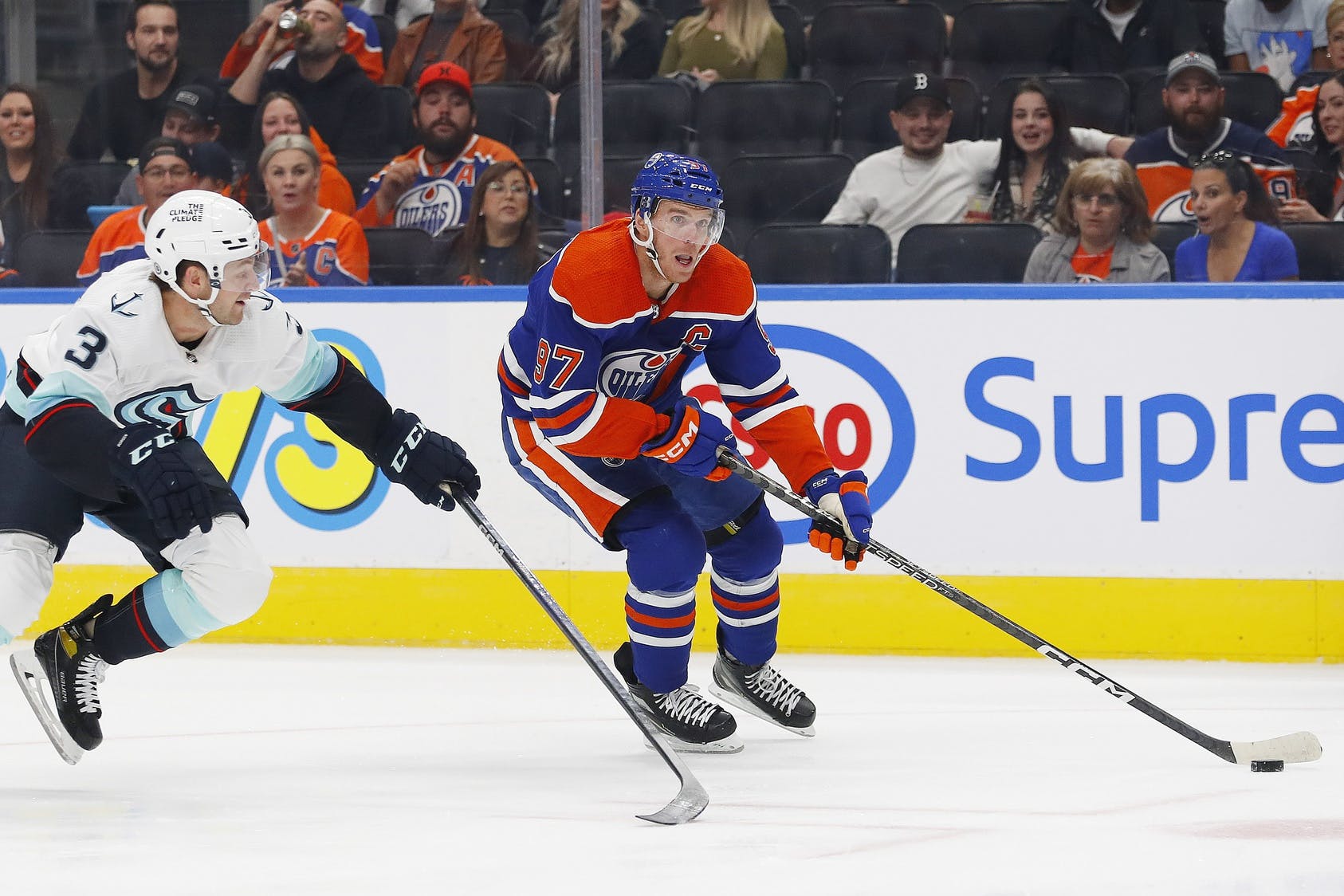 By Jason Gregor
28 days ago
We aren’t officially in the second half of the season, but with the calendar turning to 2023 it feels that way, and a quick glance at the playoff picture shows the race for playoff spots and home ice advantage is upon us.
Welcome to our Oilers game day content presented by NHL lines site Betway! 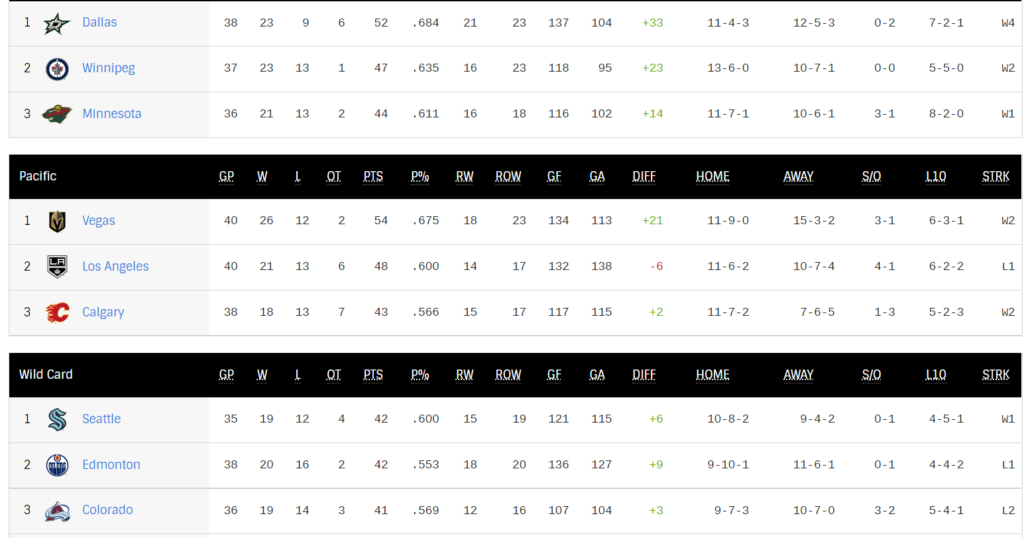 We could have an entertaining race in the Pacific Division and for the wildcard. St. Louis (37 points), Nashville (36), and Vancouver (35) will need to get hot, but they aren’t completely out of it yet, although the Blues losing Ryan O’Reilly and Vladimir Tarasenko for the rest of this month is a big blow.
The Los Angeles Kings are 9-4-2 since December 1st and have given themselves some space as the #2 seed in the Pacific. But Calgary and Edmonton have two games in hand on them and Seattle has five. The race for the second seed, and home ice in the first round, should be intense over the next four months.
And head-to-head games among those teams could be a big factor in who finishes second. Vegas would have to hit a few icy patches to not finish first based on today’s standings.
Edmonton is 5-4 v. Pacific teams (Seattle is 7-4-1) and has 17 division games remaining, including two against the Kraken. Tonight is the start of a tough schedule for the Kraken. Their next nine games are in nine different cities. They play in Edmonton, Toronto, Ottawa, Montreal, Buffalo, Boston, Chicago, Seattle and Edmonton. It is essentially a nine-game road trip, with one quick stop home before they finish their trip back in Edmonton two weeks from tonight on January 17th.
The Oilers would love nothing more than to give Seattle a loss to start their road trip. In their brief existence the Kraken have struggled against the Oilers. Edmonton is 3-1 and has outscored the Kraken 20-11, including a 7-2 drubbing last Friday in Seattle.
The major advantage Edmonton has tonight is on the power play. The Oilers are a league-best 32.1%, while the Kraken penalty kill is 31st at 68.5%. The Kraken have allowed a PP goal in 21 of their 35 games, which isn’t crazy high. The Oilers have allowed a PP goal in 27 of their 38 games. Seattle’s PK has struggled in allowing multiple PP goals in a game. They’ve allowed 2+ goals 12 times this season which is 34.8% of their games. Edmonton is at 21%, and the Oilers don’t have an elite PK. They are 26th at 73%.
The Oilers’ PP went 2-for-2 in Seattle on Friday, and that was without Leon Draisaitl. He’s back tonight which should only help the Oilers’ red-hot PP. Edmonton has scored 21 PP goals over the past 15 games and is producing at 39.6% clip. In the same span Seattle’s PP is 32nd at 9.4% (three goals on 32 chances).
The Kraken PP is struggling as bad as the PK is, and the team is 5-7-1 since the start of December. Seattle is 12-3-2 when they score a PP goal and 7-9-2 when they don’t. The Oilers are 18-8-2 when they score a power play goal.
If the Oilers want home ice in the first round, they need to win these games. The Oilers have dominated their divisional rivals the previous few seasons, and if they can repeat that in the second half it will go a long way to starting the 2023 playoffs on home ice.

Hyman – McDavid – Puljujarvi
Foegele – Draisaitl – Yamamoto
Janmark – RNH – Kostin
Holloway – McLeod – Ryan
Nurse – Ceci
Kulak – Barrie
Broberg – Bouchard
Skinner
Leon Draisaitl returns to the lineup after missing two games with an oblique strain. Both Markus Niemelainen and Philip Broberg were on the ice for the optional skate, so I’m not 100% certain Broberg is playing, but that is my sense. Stuart Skinner will make his 23rd start of the season.

Schwartz – Wennberg – Burakovsky
McCann – Beniers – Eberle
Donato – Gourde – Bjorkstrand
Tanev – Geekie – Sprong
Larsson – Dunn
Oleksiak – Schultz
Soucy – Borgen
Jones
Martin Jones also makes his 23rd start of the campaign. He is 8-1-1 in his last 10 starts, which is amazing considering he’s posted an .870Sv% and 3.60 GAA. He has allowed 4+ goals in five of those starts. On the season he has an .888Sv%, which is actually lower than the .898Sv% he averaged the three previous seasons.
Jones did stop 18 of 19 (.947Sv%) v. the Islanders on Sunday, but if the Oilers can generate multiple good looks tonight the stats suggest they will be rewarded with goals. 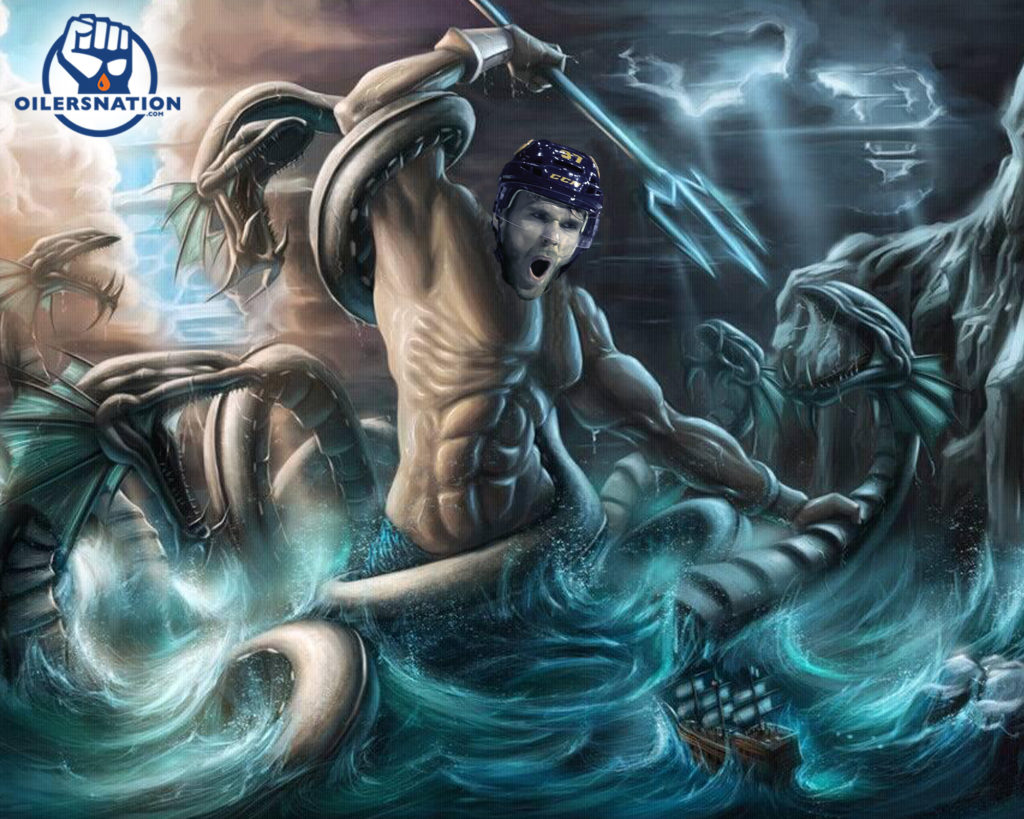