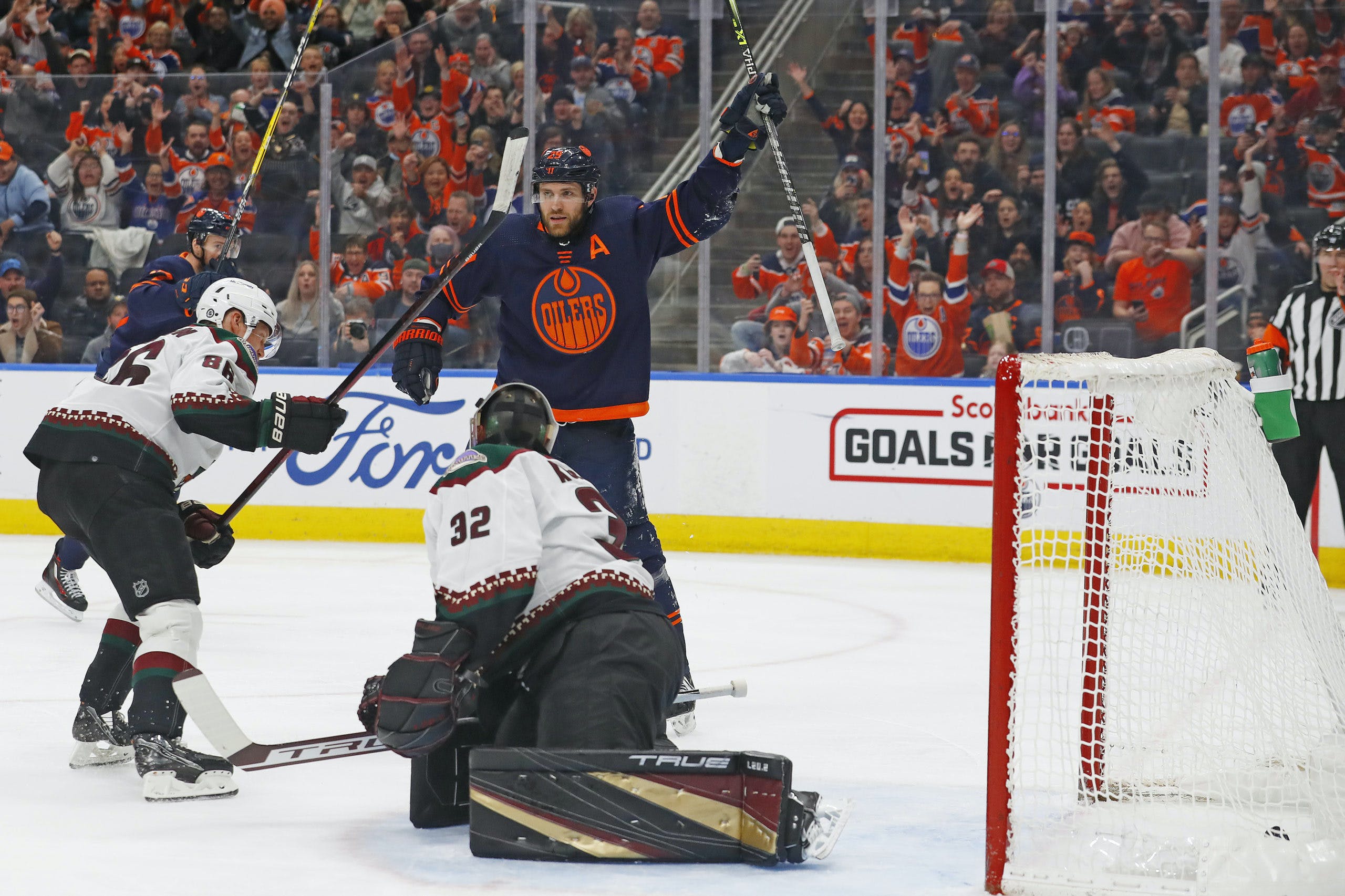 By Jason Gregor
1 month ago
The Arizona Coyotes’ 14-game road trip (yes, you read that correctly) concludes tonight in Edmonton. They won the first three games of the trip but are 1-6-3 since. This is as close to a free space on the bingo card as you can get in the NHL. A fatigued team, without much high-end talent yearning to get home to their families and their own beds.
— The Oilers dominated the Coyotes last season going 3-0 and outscoring them 16-5. They do defeat teams they should. Not all the time, no team does, but they are 5-1 in their last six v. the Coyotes. They didn’t play very well v. Washington two nights ago, but a repeat performance seems unlikely. Even with their injuries up front, the Oilers have more talent than the Coyotes. Edmonton just needs to outwork them.
— The Coyotes are offensively challenged. Clayton Keller is having a solid season with 22 points in 23 games, but he is 74th in league scoring. Matias Maccelli is second on the team with 17 points (144th overall), while Lawson Crouse has the third most points among their forwards with 12 (212th). Crouse leads them with 10 goals, which is tied for 51st.
— The Coyotes are 28th in GF/game at 2.65 and 22nd in GA/game at 3.43. They have allowed three or more goals in 17 of their 23 games and are 1-12-4 when allowing three goals. Edmonton needs to shock Oilersnation and set the tone in the first period.  Edmonton is 8-3 when scoring first while Arizona is 5-1-2. Neither team has been great at scoring first. However, the Oilers are tied for the fourth most wins when not scoring first. They are 6-9, while Arizona is 2-11-2 when giving up the first goal. The Oilers’ ability to come from behind has helped them stay above .500.
— Jay Woodcroft mentioned the Oilers were one of the leaders in scoring goals in the first five minutes of the period. Edmonton has scored a first period goal in 12 of 26 games, and five of them came in the first five minutes. However, in three of those games, the Oilers tied the game when they scored in the first five minutes. They have been better at scoring early in the second and third period, and it was the first goal of the period. But quick starts have not been the Oilers forte regardless of how you look at it.
— Edmonton is 29th in first period goals with 15. Arizona is last with 11. The Coyotes have the worst first period goal deficit at -14 (25-11). Chicago is next at -12 (24-12) followed by the Oilers at -9 (24-15). The players have talked about it often. They are aware of it, but thus far they haven’t found a way to improve their play in the first period.
— The Oilers are fourth in second period goals (36), but they are 29th in goals allowed in the middle period with 38. Their -2 GF-GA ratio is 21st. Their best period is the third as they outscore teams 36-31. They have the fourth most goals scored and are tied for 19th in goals allowed. Their goals against continue to be a much larger issue than scoring goals.
— The Coyotes are the most penalized team in the NHL averaging 4.7 times shorthanded/game. Edmonton has to attack them and force them to take penalties. 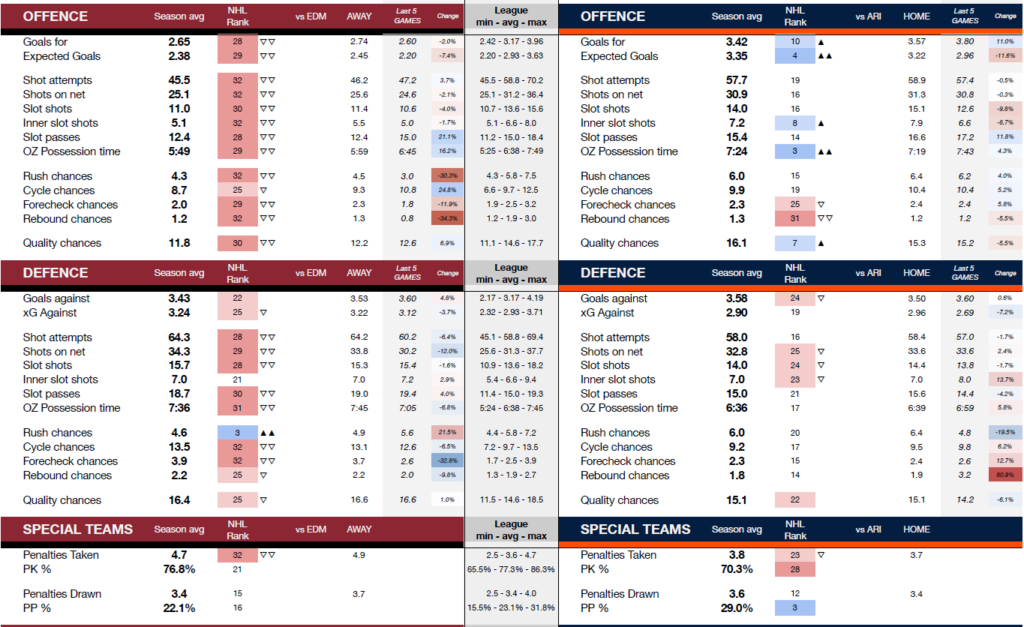 The Coyotes rank in the bottom 10  of every offensive and defensive category except rush chances allowed (third) and inner slot shots allowed (21st). Karel Vejmelka is 10th best in the NHL in saves above expected. He’s kept the score much closer than it should be on many nights.
— There are 172 forwards in the NHL who have played at least 300 minutes at 5×5. Jesse Puljujarvi ranks 172nd in GF with seven, 172nd in GF% at 26.9%, he is 151st in SF%, 138th in goals against, 132nd in FF% and 117th in xGF%. As for his production, he is tied for 161st in goals with one, tied for 134th in assists with four and tied for 163rd in points with five. I’m sorry, but there are no metrics to suggest he is playing well. You can’t just say it is bad luck (PDO). He needs to play better.
— Evan Bouchard didn’t see the ice after making an error on the Capitals’ third goal on Monday. But I t wasn’t for one mistake — usually, a benching occurs after the coaches have had multiple discussions with the player. I thought Bouchard handled it very well when he spoke yesterday. He said he needs to be better, understood why the coaches did it, and tonight he will get a chance to show them he’s learned from it. I expect he will be more assertive tonight. He’s still a young D-man learning the NHL game. Very few coaches will staple a player to the bench. When they do, it sends a message, not just to that player, but to the entire team.
— Stuart Skinner has started eight of the last 11 games. That ratio would put him on pace to start 60 games. It is too much, but Jay Woodcroft has a tough decision tonight. Does he play Skinner again, or does he give Jack Campbell a start against a weak Arizona team? Campbell has to play at some point so would you play him tonight or go with Skinner and play Campbell v. Minnesota on Friday? Or do you run Skinner both games? Campbell’s subpar play isn’t just impacting him now. It is impacting the amount of rest for Skinner.
Which goalies would you start for the next four games, covering tonight, Friday v. Minnesota, Monday in Minny and Tuesday in Nashville? I’m curious to see the replies. I think you can make a case for either. But right now, no doubt, they will be leery to start Campbell. I don’t love my choice, but I’d go with Campbell tonight and Skinner on Friday and Monday. I think Campbell has a better chance to gain confidence tonight than on Friday. Skinner gives you the better chance to win tonight though. You?

You can bid by listening to TSN 1260 between 2-6 p.m. today and calling 780.444.1260 or text 101260. All money raised will help out The Christmas Bureau. Thanks in advance.
Editorials
Featured
Oilers Talk
Recent articles from Jason Gregor