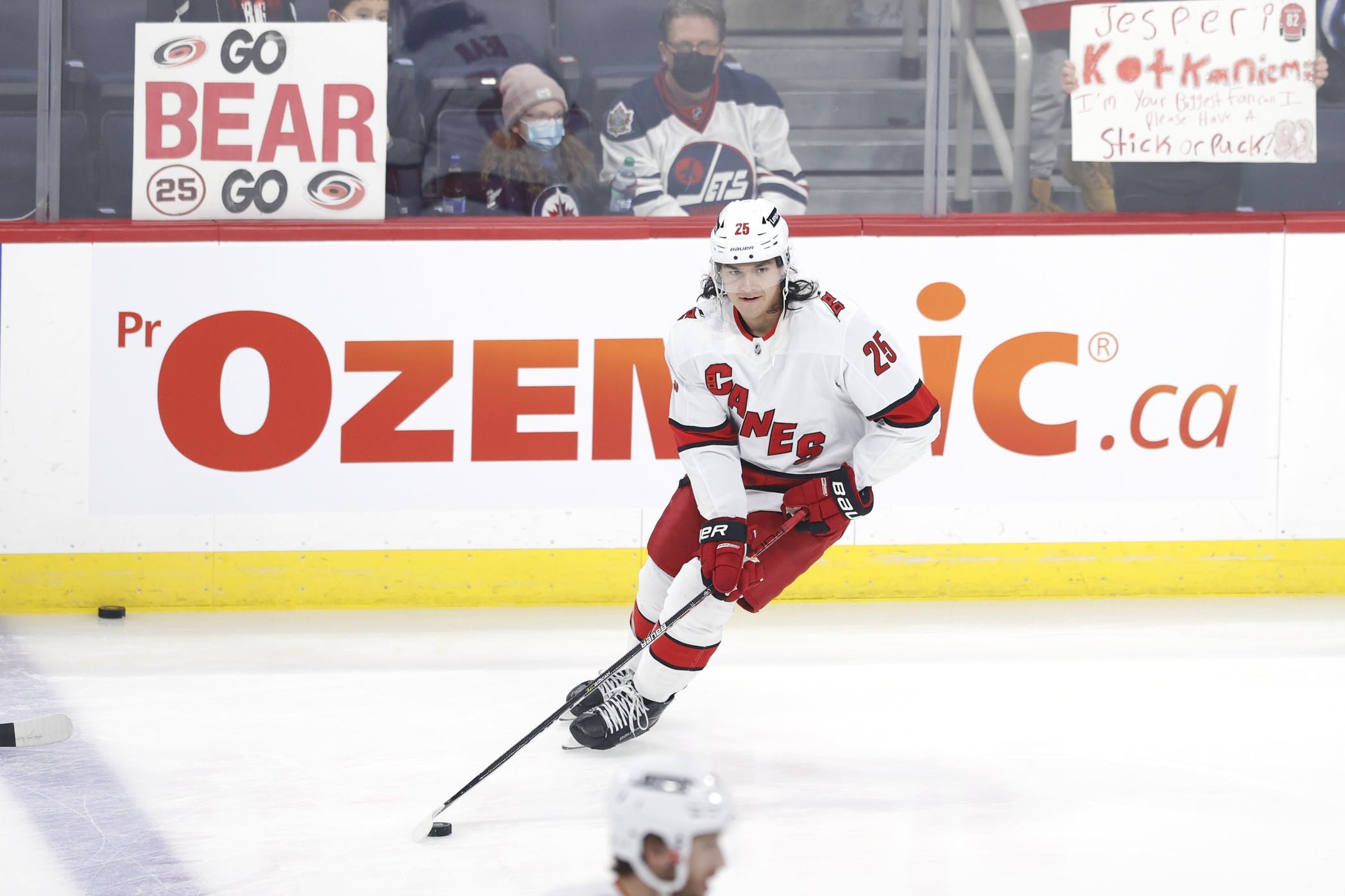 By Cam Lewis
11 months ago
It’s been an awful homestand so far. The Oilers will look to snap their four-game losing streak and get back in the win column on Saturday night when they host the Carolina Hurricanes.
1. The Oilers need to have a good start to this game. One of the things that’s been killing Oilers during this losing skid has been slow starts out of the gate that result in them playing from behind. In the loss to Seattle, Yanni Gourde scored just 49 seconds into the game. Rasmus Kupari scored for the Kings two minutes into the game against Los Angeles and Joel Eriksson Ek scored a power-play goal for the Wild just over a minute into the game against Minnesota.
2. The one game in which the Oilers didn’t allow an early goal was the one against Boston, which was also the strongest performance they’ve had during this stretch. Still, even then, the Bruins grabbed a 1-0 lead late in the first period when Brad Marchand scored a short-handed goal.
3. The last time the Oilers scored the first goal in a game was against the Pittsburgh Penguins which, unsurprisingly, was their last win. The Oilers absolutely need to come busting out of the gate in this one and find a way to score first. Throw pucks on the net from everywhere, crash and bang, and just find a way to score an ugly one. Just don’t play from behind and have the energy zapped from the crowd early.
4. It would be great for Edmonton to get some offence from their bottom-six. It’s very clear that Connor McDavid and Leon Draisaitl are exhausted from shouldering such a heavy load. Draisaitl is logging 22:59 per game and McDavid is playing 22:32 per game, which ranks them first and second in the league in average time on ice among forwards by a pretty wide margin. There are teams where the top defenceman isn’t even playing as much as the Oilers have Draisaitl and McDavid playing.
5. The last time the Oilers got a goal from their bottom-six was all the way back on November 20 when they beat the Chicago Blackhawks by a score of 5-2. Ryan McLeod scored just a couple of minutes left in the first period to give Edmonton a 4-0 lead. In the eight games since, there’s been nothing from the bottom-six, and the Oilers are being outscored 10-to-1 without McDavid and Draisaitl on the ice at even-strength.
6. If the Oilers lose tonight, it’ll be five straight losses. The last time the team had such a skid was back in 2018-19. They lost six in a row in late December, did so again in late January, and had five-game losing streaks in February and March. The six-game losing streak I mentioned that came in January was the one that ultimately got Peter Chiarelli fired.
7. Seeing Edmonton have a bad stretch in December really isn’t anything out of the ordinary. The team’s longest losing streak of the 2019-20 season was four games and it also came right around this time. They lost to Buffalo, Carolina, Minnesota, and Toronto and then beat Dallas on the road to end the skid. All told, the 2019-20 Oilers went 5-8-1 in December and had a 21-17-4 record at the turn of the new year. They then heated up in January as Mike Smith went on a hot streak and Kailer Yamamoto coming up from the AHL gave the team a second line.
8. The 2019-20 Oilers erased their poor December showing with an excellent month of January. They beat the Rangers in a wild 7-5 game on New Year’s eve and then proceeded to pick up at least a point in all but one of their nine games in January. The difference for this year’s team is a very daunting road trip on the horizon. The 2019-20 Oilers had a five-game trip in January in which they went 3-1-1. This year, the Oilers will go on an eight-game road trip that starts before Christmas and goes into early January.
9. This trip will start in California with games against L.A. and San Jose, the Oilers will then play in Calgary right after Christmas, then they’ll travel to St. Louis to play the Blues, and then they’ll play the Devils, Islanders, Rangers, and Maple Leafs in a swing through the east. The games against the Sharks and Kings are big because those teams are still lurking around in the playoff picture and the Oilers don’t want to help them out at all.
10. Long story short, it’s time to kill this losing streak because the schedule ahead is far from easy. This six-game homestand looked like an excellent opportunity to rack up some points in the standings before embarking on a huge road trip but the Oilers have lost the first three games. They have Carolina tonight, and then the Leafs and Blue Jackets.
11. Carolina is a difficult opponent. They’re 18-6-1 for the season and they’ve allowed the fewest goals against in the league. Freddy Andersen has been excellent for the Canes, boasting a .929 save percentage, and the team plays very well defensively under head coach Rod Brind’Amour, a two-time Selke Trophy winner. The Canes are in the middle of a five-game trip through Western Canada and Minnesota and they’ve beaten the Jets and Flames already.
12. The last time the Oilers played the Hurricanes was February 16, 2020, in which Josh Archibald scored in overtime to give Edmonton a 4-3 win. Ethan Bear played 22:34 for the Oilers that night. Expect a big performance from him tonight. I get the feeling he has a bit of a chip on his shoulder when it comes to facing the Oilers.