By Cam Lewis
2 months ago
The Edmonton Oilers will look to salvage their three-game swing through New Jersey and New York when they take on the Rangers on Saturday afternoon at Madison Square Garden.
1. This is a head-to-head of teams who reached the Conference Finals last spring and are off to underwhelming starts in 2022-23. The Oilers, as we know, are 10-10 through the first quarter of the season and currently sit on the outside of the playoffs looking in. The Rangers, meanwhile, sit in the top wild-card spot in the Eastern Conference at 10-7-4 but have four teams within two points of catching them. They could also be out of a playoff spot by Saturday morning depending on how the games on Friday night shake out.
2. New York went 52-24-6 last season, good for second in the Metro Division. The Rangers were a middle-of-the-pack team in terms of goals scored but they allowed the second-fewest goals against, behind only the Carolina Hurricanes. This season, the Rangers are again right in the middle when it comes to goals scored but they’ve slipped down to 14th in goals against.
Igor Shesterkin had a world-beating performance last year, as his .935 save percentage resulted in a nearly unanimous Vezina Trophy win and a third-place finish for the Hart Trophy behind Auston Matthews and Connor McDavid. This year, Shesterkin has been very good as opposed to dominant, as his .917 save percentage ranks 11th among goalies who have played at least 10 games.
Now, this note isn’t meant to knock Shesterkin’s play this season. He’s been very good, but it illustrates the fact that a significant part of New York’s performance last year was the result of an out-of-this-world performance from Shesterkin.
3. As mentioned above, the Rangers are again right in the middle when it comes to scoring goals. Mika Zibanejad leads the way with 10 goals, and Chris Kreider, who set a career-high with 52 goals last year, is right behind him with nine. Vincent Trochek, who was signed in the off-season to replace Ryan Strome, has seven goals. New York’s young trio of Alexis Lafreniere, Kaapo Kakko, and Filip Chytl have combined for 10 goals thus far.
Artemi Panarin is having another productive season for the Rangers with five goals and 23 points through 21 games. But as opposed to his other three seasons with the Rangers, Panarin is in the red in terms of even-strength on-ice goal differential despite that production. His goal differential between 2019-20 and 2021-22 was 164-to-99. This year, it’s 13-to-18.
The difference comes down to the blueliners that Panarin has on the ice with him. When Adam Fox is one of the defenders on the ice, Panarin is outscoring opponents 6-to-4. When any other defenders are on the ice, Panarin is being outscored 14-to-7.
All told, the Rangers have 45 goals scored and 45 goals allowed at even strength this season. They’re ahead 20-to-13 with Fox on the ice and they’re behind 25-to-32 when he isn’t.
5. While there’s been plenty of talk about how Edmonton’s defence and Jack Campbell aren’t getting the job done this season, the Oilers have also struggled recently to score goals. Since their big 7-4 win over the Nashville Predators back on November 1, the Oilers have scored more than three goals in just three of 10 games.
They have two goals in two games on this road trip. Vitek Vanecek put up a strong performance for the New Jersey Devils on Monday, stopping 28 of 30 shots, and Ilya Sorokin was incredible for the New York Islanders on Wednesday, stopping all 49 shots he faced. The task doesn’t get any easier on Saturday with Shesterkin in New York’s net.
6. At this time last year, the Oilers were 15-5. That strong start bought them some room for error, which was needed as they went 3-7-1 in December, 4-4-2 in January, and 1-2-0 in the first few games in February before firing Dave Tippett.
This year, the ho-hum start means the Oilers don’t have as much room for error during the dog days of winter. They need to win 39 of their remaining 62 games to match the 49 wins they had last season. On the bright side, the schedule will soften up following an incredibly difficult month of November, but there really is no such thing as an easy win in the NHL. 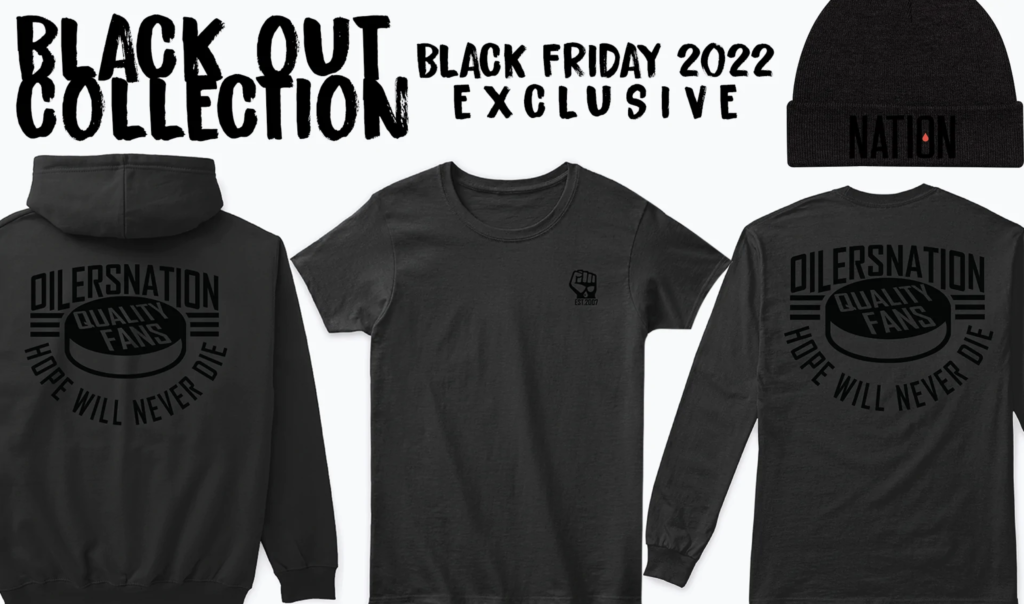 The 2022 NationGear Blackout Collection is out now and moving quickly, so you don’t want to wait on picking something up to beautify your wardrobe. Once these designs are gone, they’re gone. The clock is ticking.
Featured
Gameday Previews
News
Recent articles from Cam Lewis