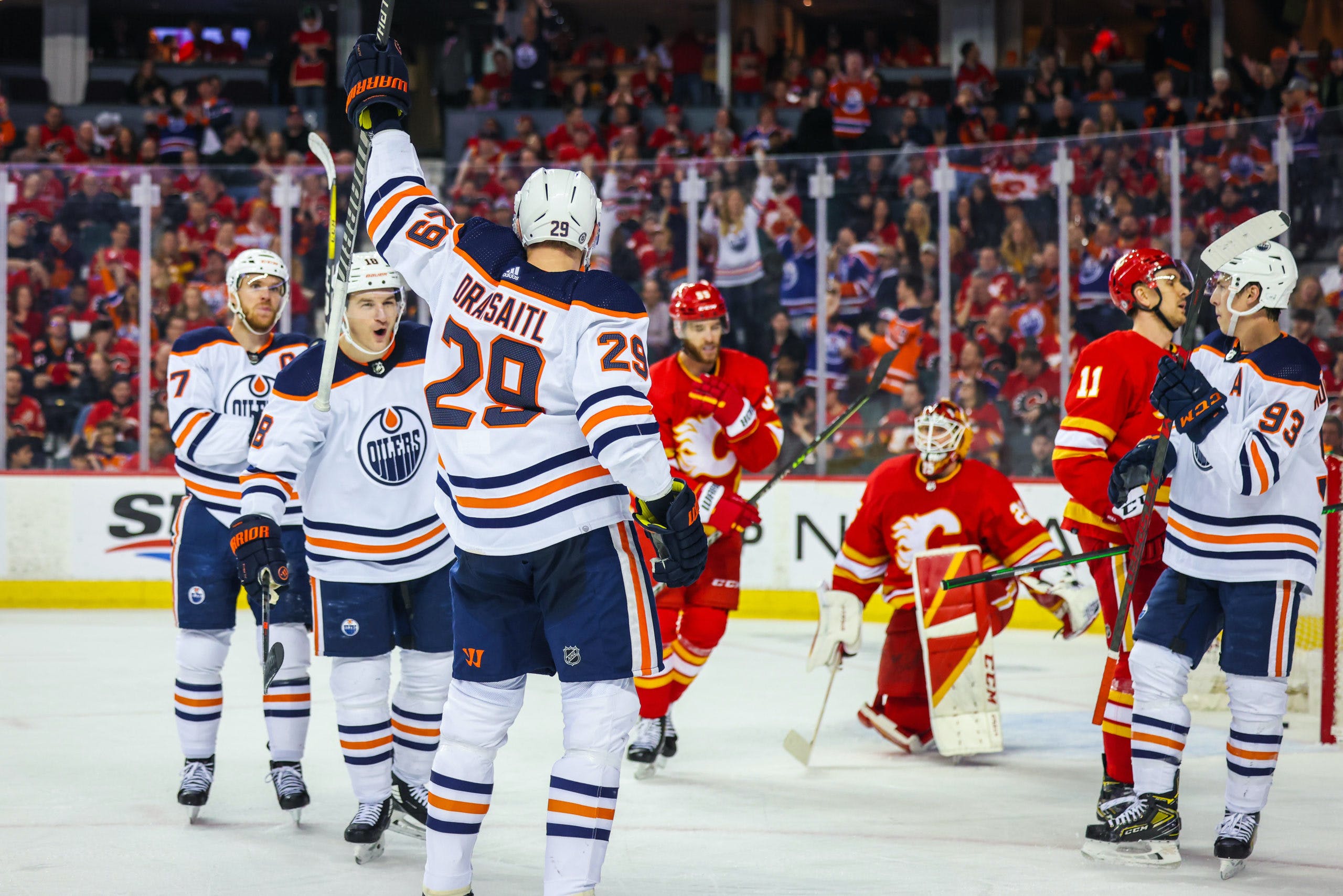 By Jason Gregor
8 months ago
The best part about the Stanley Cup playoffs is we see how teams react and counter what their opposition is doing. It is the same team every second day, and rarely are there any surprises. The Edmonton Oilers and Calgary Flames aren’t going to make any significant changes to how they play. There might be subtle changes after a loss, but Edmonton won’t suddenly play the Kings’ 1-3-1 system.
These teams are very evenly matched. They’ve been almost identical since Edmonton made a coaching change.
—  In their final 38 games the Oilers and Flames each had 55 points. Edmonton went 26-9-3 while Calgary was 25-8-5.
The Oilers scored 3.82 goals/game and allowed 2.76. Their PP was 24.1% and PK was 82.1%
The Flames scored 3.84 goals/game and allowed 2.63. Their PP was 24.5% and PK was 81.5%.
Very little separated the two. Only Florida had a better P% than the two Alberta teams.
— Both won their first round series in seven games, but in very different fashion.
The Oilers scored 3.86 goals/game and allowed 2.43. Their PP was 36.8% and their PK was 87.5%.
The Flames tallied 2.14 goals/game and allowed 2.00. Their PP was 8.3% and their PK was 91.7%.
@Jake Oettinger played great in goal for Dallas, but the Flames did struggle to score. Their PP was anemic. Edmonton needs to pressure their PP and not allow them to get any sort of rhythm on the man advantage. Connor McDavid had 14 points while the Flames scored 15 goals.
— Can Calgary slow down McDavid? It is easier said than done. He has 11 goals and 25 points in his previous 14 games v. the Flames, including 3-4-7 in four games this season. In the regular season, @Noah Hanafin and @Rasmus Anderson played 27 and 28 minutes against McDavid, and didn’t allow a goal. Same with the Tkachuk-Lindholm-Gaudreau line in 21 minutes. Chris Tanev and Oliver Kylington also had positive numbers v. McDavid. Of course regular season means nothing now, but @Elias Lindholm and @Mikael Backlund each played 21 minutes against McDavid, and I’d suspect we’ll see a similar split to start the series. Especially in Calgary.
— The chess match will be how Jay Woodcroft deploys McDavid. I expect @Leon Draisaitl to start on the wing. He is clearly nursing an injury and isn’t 100%, so I see him starting on the wing with @Kailer Yamamoto. And why wouldn’t Woodcroft mix McDavid in with Evander Kane and Zach Hyman? It worked against LA and I see no reason not to continue that plan v. Calgary. Kane and Hyman play much different than Draisaitl and Yamamoto, so it could impact the matchups. Plus if they change on the fly, the Flames won’t know which centre is going out. Will it be McLeod or McDavid?
— McDavid played 27 minutes in game seven and never looked fatigued, but he only averaged 21:41/game in the series. He wasn’t over used, and with virtually no travel this series I could see McDavid averaging 24 minutes a night. Why not? He’s playing the best hockey of his career, and his conditioning is top notch. I don’t see 24 minutes a game as unreasonable. Last season v. the Jets, because of all the overtime games, McDavid averaged 30:24/game. Leon Draisaitl was at 31:55. The Oilers just had three days between games with zero travel. McDavid will be extremely fresh to start this series. There is nothing to hold him back for. If a game gets out of hand, either way, then you can reduce his minutes, but he’s trained hard in the off-season to play big minutes.
— Here is a look at how the Oilers and Flames looked offensively, defensively and on special teams in round one courtesy of Sportlogiq. 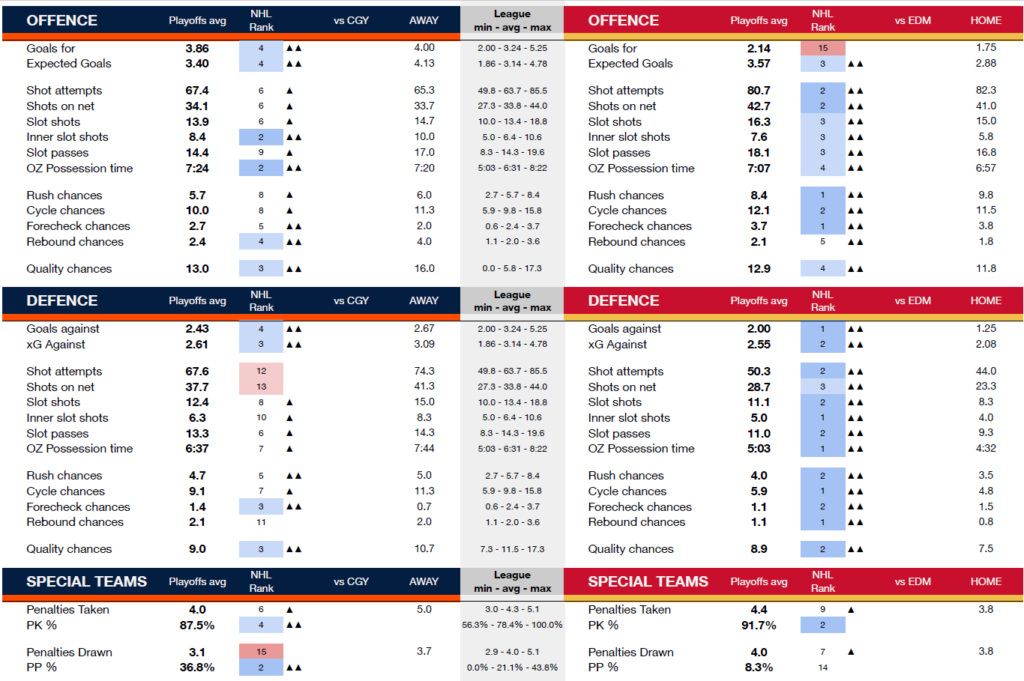 — The goaltending matchup will be key. Both @Mike Smith and @Jacob Markstrom played well in the opening round. Smith actually had more quality starts and he stole a game according to SL.

I think we will see more offence in this series than we saw in round one. The Flames won’t limit Edmonton to 2.00 goals/game and I expect Calgary to score more than the Kings did.
— The past has no bearing on this series, but in three of the previous five meetings the series went the distance. The Oilers won in seven games in 1984 and 1991, while Calgary won in seven in 1986. Edmonton won in four (1988) and five (1983), but I’d be surprised if this was a short series. It has six or seven games written all over it. They are fairly evenly matched. They split the season series 2-2 with Calgary outscoring the Oilers 17-16. Each team had one victory by four goals. Edmonton won 5-1 and Calgary won 9-5. The home team won all four games.
— In the first round Edmonton was led by McDavid offensively, but they got decent production down the lineup as well.

They had 12 players score a goal and 10 players had at least three points. McDavid will be their offensive catalyst, but they will need depth scoring to win this series.
— Meanwhile, the Flames will be looking to jumpstart their offence.

You won’t win many series scoring 15 goals in seven games. The Oilers have a much more potent offensive attack than Dallas. Edmonton had the seventh-best offence all season, while Dallas was 21st. Since Woodcroft arrive the Oilers were fifth offensively (3.82), while Dallas was 28th (2.68). Calgary will need to finish more of their chances. Oettinger played great, no doubt, but the Flames forwards need to bury more of their quality chances.
— Markstrom handles the pucks just as much as Smith. In the first round, Markstrom had 142 pass attempts while Smith had 127. Markstrom is more conservative, as he only attempted 17 outlet pass attempts, while Smith had 32. The Oilers will need to be aware of Markstrom’s ability to knock down pucks. They will need smart dump-ins similar to the Flames not allowing Smith to make quick outlet passes.