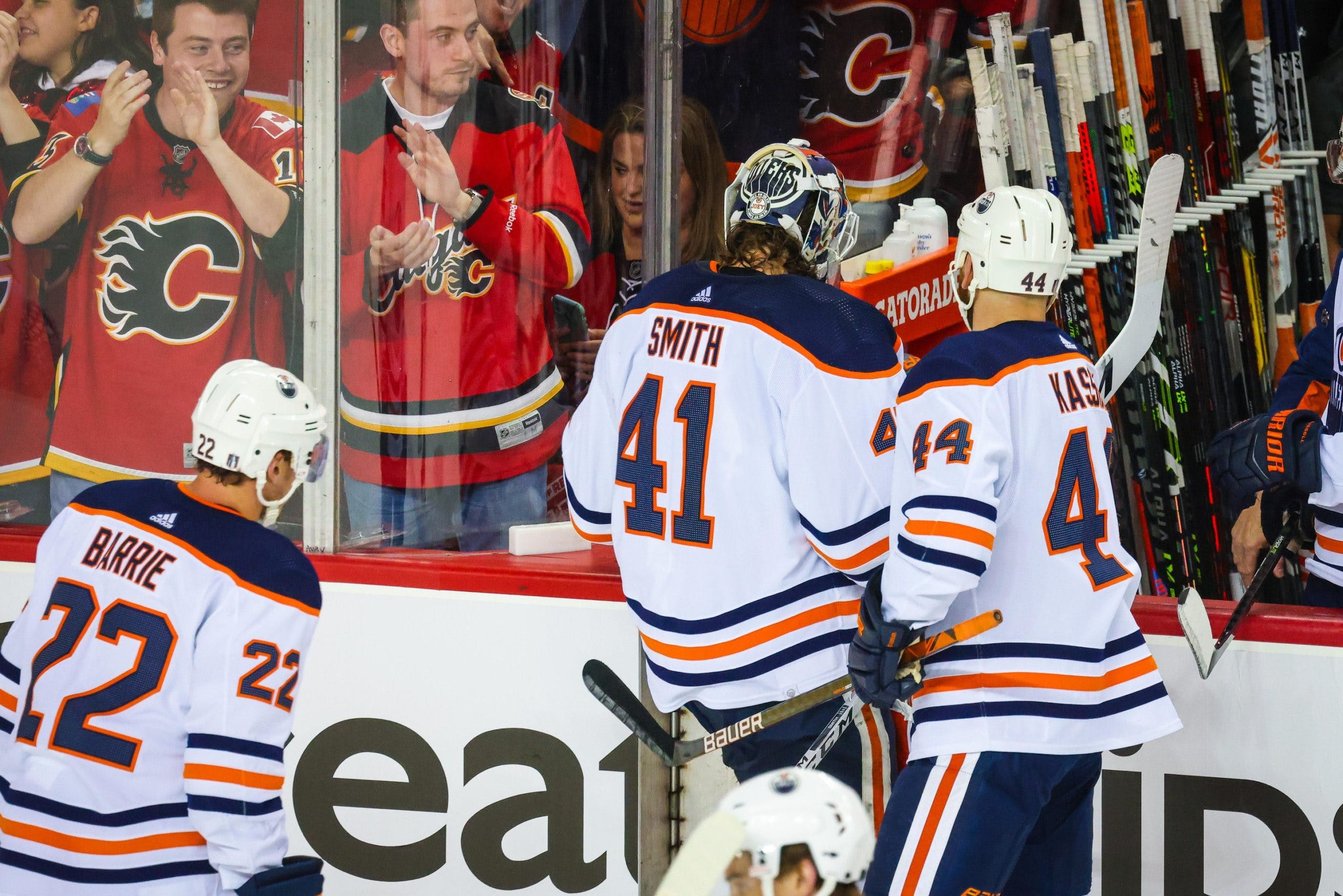 By Jason Gregor
6 months ago
There is only one way to go for the Edmonton Oilers: up. From the opening faceoff, the Oilers were overwhelmed by the Calgary Flames in game one. They allowed two goals in the first 51 seconds, a new Stanley Cup playoff record, they were outshot 48-28 and outscored 9-6. It was a dreadful defensive performance, but the great part about the playoffs is you have a chance to redeem yourself two days later, and the Oilers will be highly motivated to remove the stench of Wednesday’s effort from their jerseys.
— “It is probably easier (to get over) to be honest, because we didn’t play very well at all,” said @Zach Hyman. “It wasn’t one of those tight games where you lose in overtime, and you think dammit we should have won that game. This is one we can wash away, we are down 1-0 and get back to work.”
Work is the key word. Edmonton’s effort in the tough areas of the ice needs significantly more urgency.
— The Oilers had nine skaters who didn’t register a hit. NINE. I know hits aren’t the only way to gauge who is involved in the game, but I felt it was reflective of how many Oilers weren’t physically ready to play. They lacked physicality in many areas. They didn’t win enough 50/50 battles. They allowed Calgary to skate freely in the offensive zone. They didn’t make life difficult in front of their own goal, and didn’t create enough traffic in front of @Jacob Markstrom.
— @Johnny Gaudreau, @Elias Lindholm, @Andrew Mangiapane, @Tyler Toffoli, and @Mikael Backlund received a combined total of zero hits. Zero. Matthew Tkachuk was hit once. Those are the most skilled Flames forwards and the Oilers essentially never touched them. That can’t happen again. They played off them too much and were far too soft on the Flames skilled players.
— Meanwhile, the Oilers top-six players were hit 10 times with McDavid, Hyman and Draisaitl being on the receiving end of eight. Calgary made sure the Oilers’ best offensive players were being pressured and hit. The Oilers need to do the same tonight.
— “It didn’t start very well that’s for sure,” said @Mike Smith. “We all feel we let each other down, but saying that, it is one game. It is about regrouping now and not letting that impact the rest of the series. To a man, we have to be ready to compete from the drop of the puck. It has been somewhat of an issue for our group in the games we have lost.”
Many players talked about the importance of each player being ready to do their job. “You can hype guys up, but each player is responsible for their own preparation,” added Hyman. The vast majority of the team needs to bring a much better effort.
— The challenge for the Oilers is that slow starts have plagued them much of the season. They only scored first in 33 of 82 regular-season games, which ranked 30th, meanwhile the Flames led the NHL by scoring first 54 times. However, the Flames have only scored first in three of their eight playoff games. Edmonton has scored first four times, but in game one the Flames were clearly more prepared to play. Edmonton can’t continually play catchup if they want to win this series.
— Darnell Nurse is clearly injured. I wonder if he has a hip or core muscle injury, because he simply can’t play physically right now. He has three hits in his last four games. He was top-10 among D-men in hits in the regular season, but his injury has limited his ability to engage physically. It is also limiting his mobility. We did see @Brett Kulak play 3:30 with Cody Ceci at 5×5, while Nurse played 11 minutes with Ceci. I wonder if we see more of Kulak and Ceci as they monitor Nurse’s minutes. Would playing Nurse and Barrie in more offensive zone situations be more beneficial due to Nurse’s injury?
— Nurse was named a finalist, along with Ryan Getzlaf and PK Subban, for the King Clancy Memorial Trophy this morning. The award is given to the player who best exemplifies leadership qualities on and off the ice and has made a noteworthy humanitarian contribution in his community. Nurse created a scholarship for students and the two winners each received a $40,000 scholarship. He is also an ambassador for the Free Play for Kids and Right to Play charitable foundations and he helped ensure that Indigenous youth across Alberta have access to specialized sports programs in their community. Congrats to Nurse, Subban and Getzlaf for using their profile to help others.
— I could see @Warren Foegele getting back in the lineup. He played all 82 games and the first five playoff games. He struggled in games four and five, and came out for the last three. You could make an argument for any of @Josh Archibald, @Zack Kassian, @Derek Ryan or @Jesse Puljujarvi to come out of the lineup in place of Foegele. The morning skate might give us an indication of who is coming out, or if Woodcroft dresses 12 forwards. Nurse’s injury, which has limited him more than Draisaitl, might be a reason we see seven D again though.
— The terrible start and consistent porous defensive play by Edmonton overshadowed three great offensive plays by McDavid that led to his goal, @Evan Bouchard’s, and @Kailer Yamamoto’s. If Edmonton can find their defensive game and a higher level of competitiveness, then the main advantage becomes McDavid’s brilliance. He has perfected the tight spin move. Defenders can’t stop him when he does that spin off a check, and look for him to execute more of that tonight.
— Some days you need a good laugh. To have the eye to pick this out and connect it to Forrest Gump was brilliant.
Edmonton needs the same attention to detail tonight.