By Jason Gregor
7 months ago
Oilers head coach Jay Woodcroft has steadfastly focused on one day at a time since he took over as Oilers head coach. He did mention the team’s larger goal of reaching 100 points a few times, but he’s repeatedly told his team to focus on what they can do today. It has worked incredibly well. The Oilers are 24-9-3 since Woodcroft and Dave Manson were promoted from Bakersfield.
And now that they’ve reached 100 points I don’t expect his focus or plan to change in the final two games.
— Tonight’s tilt against the San Jose Sharks and tomorrow’s game v. Vancouver have very little impact on the Oilers’ playoff situation. The Oilers have secured second place in the Pacific Division and home-ice advantage in round one against the Los Angeles Kings. The only impact the results from tonight and tomorrow could have is if the Oilers meet Pittsburgh or Washington in the Stanley Cup finals — then home ice advantage would come into play. Pittsburgh has 101 points with one game remaining. The Oilers have 100 with two remaining and Washington has 99 with two remaining.
— While the result won’t impact the standings or home ice advantage in the Western Conference, Woodcroft will want his team to continue playing well. They dominated the Penguins for long stretches last night. There were numerous shifts at 5×5 where the Oilers looked like they were on the power play as they controlled the puck and moved it around easily. Sportlogiq’s numbers reflect the Oilers’ dominance. The Penguins had a combined two scoring chances off the cycle and off the rush. 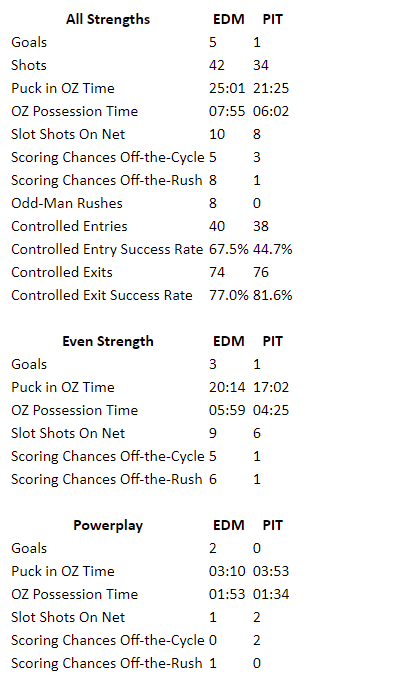