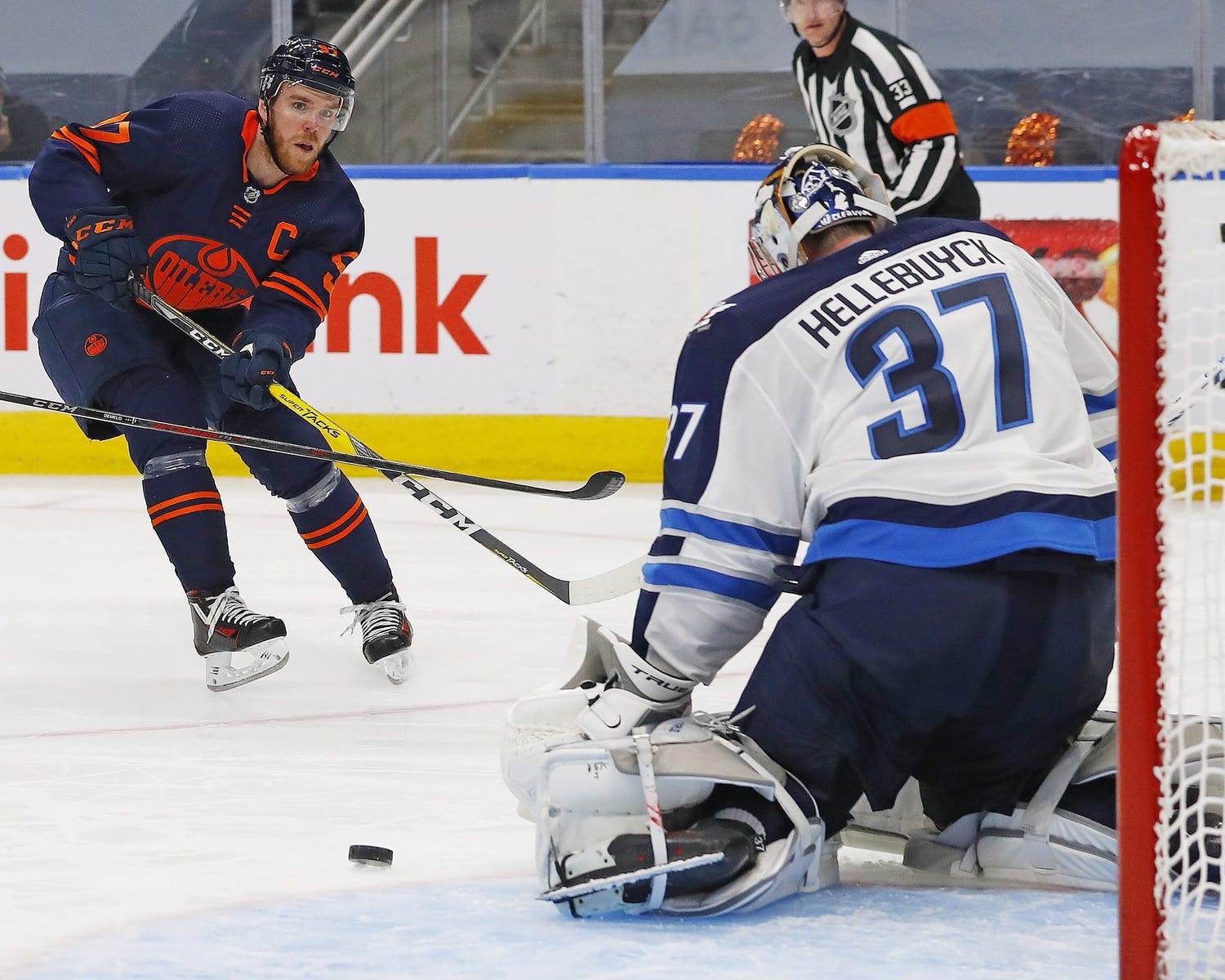 By Cam Lewis
1 month ago
After a 7-2 spanking of the Seattle Kraken on Friday night, the Edmonton Oilers will be back in action as they host the Winnipeg Jets for a New Year’s Eve tilt.
1. Despite not having Leon Draisaitl in the lineup, Connor McDavid popped off with five points against the Kraken, giving him 72 points through 37 games on the season.
He’s currently operating at a 1.95 point-per-game pace, which is even better than his absurd production during the pandemic-shortened 2021 season in which he scored 105 points over 56 games. If McDavid continues scoring at this pace and plays in all 82 games this season, he’ll wind up with 160 points. Only Wayne Gretzky and Mario Lemieux have ever reached that many points in a single season.
2. While McDavid’s five-point performance was the highlight of Friday’s game, Ryan Nugent-Hopkins deserves a lot of praise for the way he played in Draisaitl’s absence. Nugent-Hopkins centered Edmonton’s second line with Klim Kostin and Mattias Janmark on his wings and the trio scored two even-strength goals. He also got involved in two of the Oilers’ power-play goals, giving him four assists on the night.
Nugent-Hopkins now has 45 points through 37 games this season. He’s just five points shy of matching the 50 points he scored in 63 games last season and he’s on pace to shatter the career-high of 69 points he set back during the 2018-19 season.
3. The Oilers went into the Christmas break on a sour note as their loss to the Vancouver Canucks left them on the outside of the playoffs looking in. Since then, they’ve won two different four-point games against Pacific Division opponents who are right around where they are in the standings.
The Oilers are now in third place in the division. They’re one point up on the Flames with the same amount of games played and they’re two points up on Seattle but the Kraken have three games in hand. Edmonton is also six points back of the L.A. Kings with two games in hand.
4. Saturday will be Edmonton’s first look at the Winnipeg Jets this season. Following a disappointing 2021-22 campaign in which they went 39-32-11 and missed the playoffs for the first time since 2016-17, the Jets have rebounded and currently sit in second place in the competitive Central Division.
The biggest reason for Winnipeg’s success thus far has been MVP-calibre play from goaltender Connor Hellebuyck, who has a .926 save percentage through 27 games. Despite being a middling team in terms of shots and high-danger chances against, the Jets have allowed the fifth-fewest goals against in the league so far this season.
5. Winnipeg’s other MVP this year has been defenceman Josh Morrissey, who’s putting together the best season of his career. Morrissey leads the team with 42 points and has an even-strength on-ice goal differential of 46-to-32 over the heavy minutes he’s played.
6. The Jets are right in the middle of the pack in terms of scoring goals. Their offence is led by three players, Mark Schiefele, Pierre-Luc Dubois, and Kyle Connor, who have combined to score 55 of their 116 goals.
Winnipeg has badly missed Nikolaj Ehlers this season. He’s appeared in just two games for the team and underwent surgery to deal with a sports hernia back in November. The hope was that 2020 No. 10 overall pick Cole Perfetti could step up and produce in Ehler’s absence but he only has six goals through 33 games thus far.
7. Beyond Ehlers, the Jets are also navigating injuries to some other key players. Blake Wheeler and Nate Schmidt are both on the Injured Reserve and Morrissey left Winnipeg’s game against the Canucks earlier this week with a lower-body injury and is currently listed as day-to-day.
Featured
Gameday Previews
News
Recent articles from Cam Lewis