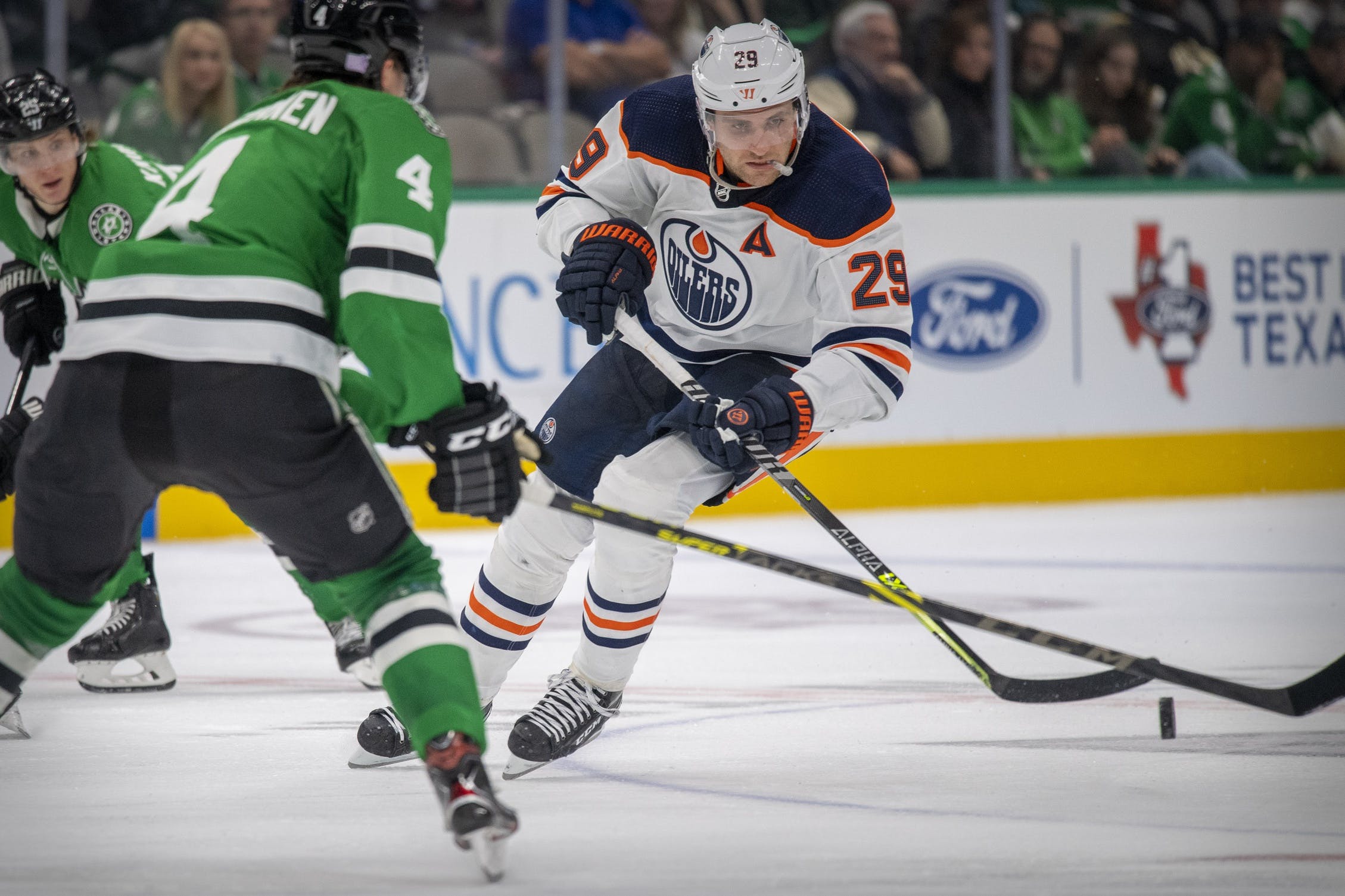 By Jason Gregor
7 months ago
Much of the focus on the Oilers’ improvement under Jay Woodcroft has been about the reduction in goals against and the Oilers’ defensive play. It makes sense since both have improved, but the offensive improvement under Woodcroft has been equally as good.
And I mean exactly the same.
Here are the numbers for both coaches.
The Oilers’ offence has scored 0.57 more goals/game under Woodcroft and the team has reduced its goals against/game by the same 0.57.
Their 5×5 scoring has increased by 0.37/game and their 5×5 goals against/game had dropped by 0.40.
The PP% has dropped by 3.9%, while the PK has improved by 4.1%.
Their power play averaged 0.77 goals/game and the PK allowed 0.68 goals against/game under Tippett.
The PP has averaged 0.72 goals/game and the PK has allowed 0.62 goals against/game under Woodcroft.
The team was +0.9 under Tippett and +1.0 under Woodcroft. So while the special teams% has changed, the Oilers are still scoring more PP goals than they allow.
We’ve discussed the defensive improvements a lot, but where has the increased offence come from? The 5×5 scoring has come from various parts.
@Connor McDavid, @Leon Draisaitl and @Zach Hyman have all had a slight increase in their goals/game. But the biggest improvement came from @Warren Foegele. He had two goals in the first 44 games but has seven in the last 32. He had no luck around the net early in the season, but has had some now. @Cody Ceci has also seen a large jump in his goal production from one to four and @Derek Ryan went from three goals in 40 games to five in 20. Others like @Zack Kassian, @Jesse Puljujarvi and @Evander Kane (although he only played five games under Tippett) saw a decrease in their G/GP. That is normal as some players will go up and down during the season.
But the improvement has come throughout the lineup. The Oilers’ top players still score the most, as they should, but the depth scorers have chipped in more. I asked Kailer Yamamoto about the increased offence, specifically 5×5. “He (Woodcroft) really harped on us about getting to the net more and creating more screens. He kept on it and I think it is paying off,” said Yamamoto.
Going to the net is one aspect, but there is more to it and I asked Woodcroft about the improved 5×5 offence.
“I think it is too simple to just say to go the net,” said Woodcroft. “There are certain things we want to do off of the cycle, and sometimes I think there can be a detriment by sending too many players to the net, because it means you likely are sending more defenders with you as well. Our players are going to the dirty areas more often, and that is important. We talked about we want more April and May (playoff) type of goals.”
Under Woodcroft, the Oilers are averaging 3.75 goals/game and 2.75 goals against. They are ranked sixth in both categories. What has been very consistent under Woodcroft and Manson has been the Oilers’ goals against — regardless if they play at home or on the road.
Here is a look at the 18 teams in the playoff hunt. Vancouver and Vegas are barely hanging on, but until they are eliminated I opted to include them. I wanted to look at home and away records, as well as GF and GA to see if anything stands out.
**H stands for Home and R is for road, while REC is record.**
The Oilers have dominated teams on home ice recently, which is why finishing second is important so they earn home ice advantage in the first round. The Oilers have allowed 2.73 GA/game at home and 2.76 on the road. Meanwhile, their offence has really crushed teams on home ice averaging 4.47 goals/game. The Oilers have taken advantage of the last change, although Woodcroft doesn’t chase matchups often, but he wisely tries to get McDavid and Draisaitl’s lines out against bottom six lines and it has worked.
Dallas is allowing more goals against than they score, both at home and on the road, yet they are 19-10-3. They are not a dominant offensive team. They’ve scored more than three goals 12 times in their previous 32 games and three or more goals 18 times. The Oilers have scored four or more goals in 16 of their 32 games and three+ goals in 25 of 32.
Dallas wins more by limiting goals than outscoring teams, and if the Oilers can score early it changes how Dallas has to play.
The Oilers are 28-2-1 when scoring first. They are also 27-0-0 when leading after one period and 32-1-1 when leading after two periods.
The Stars are 33-10-1 when scoring first. They are 26-3 when leading after 20 minutes and 25-4-1 when leading after 40 minutes.

Kane – McDavid – Puljujarvi
Hyman – Draisaitl – Yamamoto
Foegele – RNH – Ryan
McLeod – Kassian
Nurse – Ceci
Keith – Bouchard
Kulak – Barrie
Russell
Smith
Jay Woodcroft sticks with the same lineup that posted back-to-back 4-0 victories. The Oilers will be very well rested.
Did you know the only players in tonight’s lineup with a GF% under 50 since Jay Woodcroft and Dave Manson joined the team are Ryan McLeod (12-13) and Evan Bouchard (18-20)? The Oilers’ 5×5 play has been very impressive, excluding the two ugly games v. Calgary and Minnesota when they allowed a combined 15 goals at 5×5. The Oilers have nine players above 60%. All their lines and D pairs have been responsible and that makes them a much more dangerous team than they were when entering the playoffs the past two seasons.

Robertson – Hintz – Pavelski
Benn – Seguin – Studenic
Kiviranta – Glendening – Radulov
Raffl – Faksa – Gurianov
Suter – Heiskanen
Lindell – Klingberg
Hanley – Hakanpää
Wedgewood
Dallas enters tonight holding the final wildcard spot in the west. They are four points ahead of Vegas and Vancouver, with a game in hand. The Stars control their destiny. If they go 3-3 in their final six games both the Canucks and Golden Knights need to go 5-0. The Stars are in Edmonton tonight and Calgary tomorrow before ending the season with four home games v. Seattle, Vegas, Arizona and Anaheim. Going 3-3 shouldn’t be very difficult.
Update: Even though Oettinger is the Stars’ starter he’s been struggling and that’s why Wedgewood gets the call. 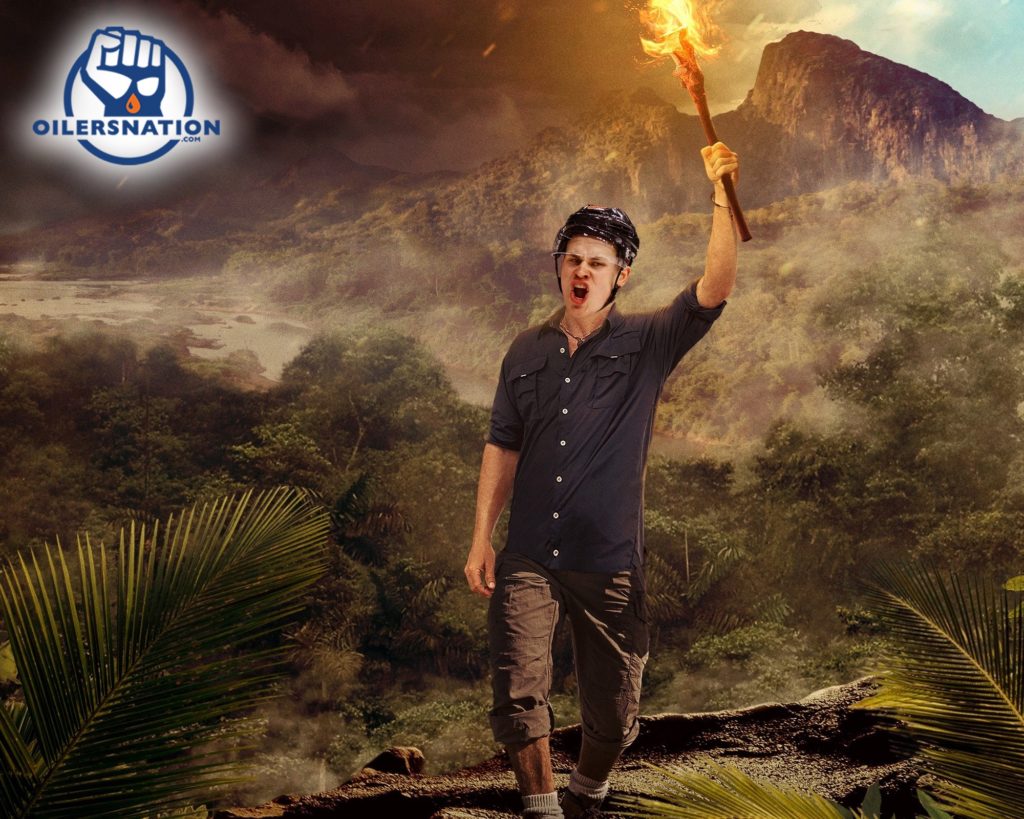