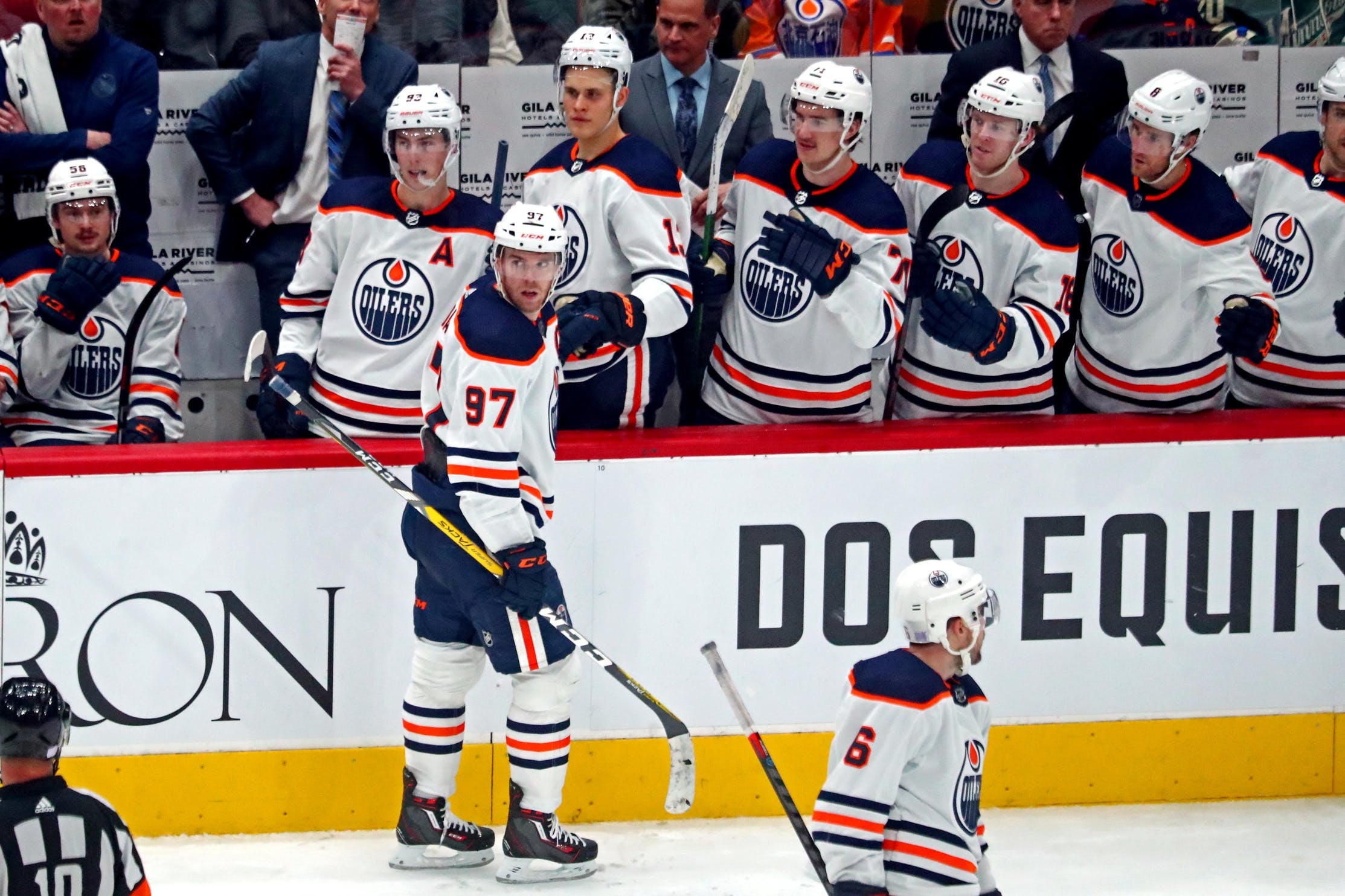 By Jason Gregor
10 months ago
Connor McDavid is on the verge of becoming the 19th player in NHL history to have five 100-point seasons. He turned 25 years of age two months ago. He’s just entering his prime. If COVID didn’t arrive in March of 2020, this would be his 6th season with 100 points as he had 97 in 2020 with 11 games remaining.
McDavid’s production has him on pace to join Mario Lemieux and Wayne Gretzky as the only players with 10 seasons with 100 points.
Lemieux had 10 seasons with 100+ points while Gretzky had 15. I’d be stunned if McDavid didn’t catch Lemieux, and I think there is a realistic chance he could catch Gretzky if he stays healthy. We have seen elite athletes in many sports extend their prime years into the mid-to-late 30s, so McDavid having 10 more years of 100 points isn’t unrealistic.
With every 100-point season, he has he joins a more elite group.
Players with five seasons: Paul Coffey, Jaromir Jagr, and Denis Savard.
Players with six: Sidney Crosby, Phil Esposito, Dale Hawerchuk, Jari Kurri, Guy Lafleur, Mark Messier, Bobby Orr, Joe Sakic, Bryan Trottier and Steve Yzerman.
Players with seven: Mike Bossy and Peter Stastny.
Eight seasons: Marcel Dionne
Ten seasons: Lemieux
Fifteen seasons: Gretzky
Jagr, Crosby and McDavid are the only three not in the Hockey Hall of Fame, and that’s only because they are still playing and not eligible to get in.
McDavid’s production has been so consistent that I think it gets overlooked a bit. It has become expected. He’s so dominant right now that scoring 120 points in a season doesn’t generate much buzz around the NHL. He’s raised the bar so high that scoring 120 points is expected, even though his career-high is 116. Granted, he scored 105 points in 56 games last season and was on pace to crush 120 and 130 points.
As McDavid is on the brink of 100 points, again, it should be noted how rare it is.
Over the past five seasons, only seven players have had a 100-point season.
McDavid four times, Leon Draisaitl and Nikita Kucherov twice and Brad Marchand, Patrick Kane, Sidney Crosby and Claude Giroux did it once.
McDavid will make it five times in six seasons, while Draisaitl is poised to get his third. Johnny Gaudreau and Jonathon Huberdeau need 10 points over their final 17 games to reach the Century mark for the first time. It will be a huge accomplishment for Gaudreau and Huberdeau, and they will do it for the first time in their 8th and 10th seasons respectively.
McDavid will reach 100 points for the 5th time in six seasons and many won’t think twice about it. That’s how good he is, but I recommend not taking it for granted. It is difficult to do and he makes it look easy.
McDavid has 14 multiple-point games in his last 19 games, and tonight he is facing the worst team in the NHL. The 20-40-5 Coyotes lost 2-1 in overtime last night in Winnipeg and will play Karel Vejmelka back-to-back rather than give Josef Kosenar his first NHL start of the season. It makes sense considering Kosenar has struggled in the AHL with an ugly .853Sv% and 4.48 GAA.
McDavid has 18 points in his last nine games v. the Coyotes and in the two meetings this year he produced 2-2-4 and 2-1-3. Another multi-point game is very plausible, and I expect he will reach 100 points tonight.

Kane – McDavid – Puljujarvi
Hyman – Draisaitl – Yamamoto
Brassard – RNH – Archibald
Foegele – McLeod – Ryan
Nurse – Ceci
Keith – Bouchard
Kulak – Barrie
Koskinen
Jay Woodcroft didn’t want guys sitting out too long so he will insert Derek Ryan and Josh Archibald in the lineup. Zack Kassian and Devin Shore are out. Woodcroft also juggled all of his lines. Jesse Puljujarvi and Kailer Yamamoto switched centres, Ryan McLeod is now centreing the fourth line.
Mikko Koskinen gets the start and I read this as the coach giving his goalie a chance to rebound, but also I’d think it means Mike Smith will start against the Kings. It wouldn’t make much sense to me to start Koskinen three games in a row, unless Smith is nursing an injury. 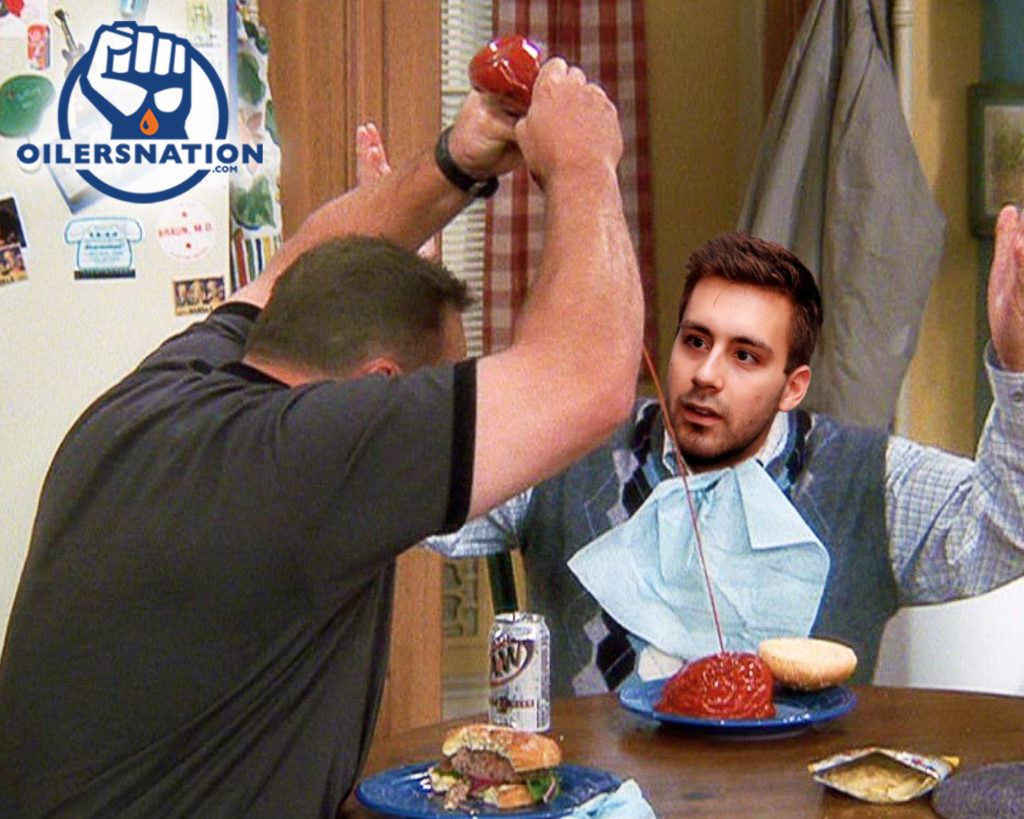