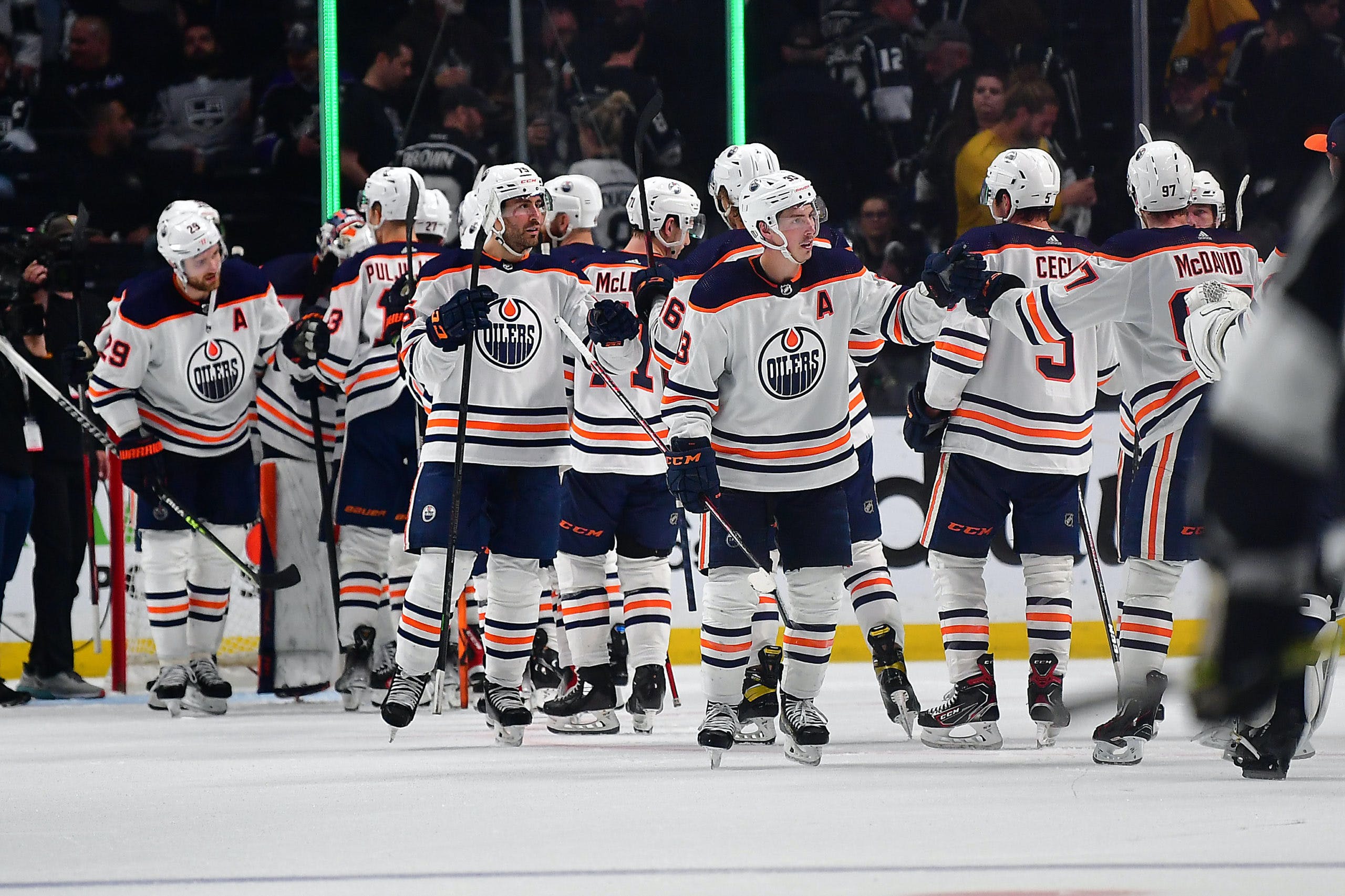 By Jason Gregor
6 months ago
The Edmonton Oilers haven’t hosted a game seven since 1990, when they defeated the Winnipeg Jets 4-1.
It’s been a long time since Oilers fans got to enjoy the excited, nervousness of a game seven on home ice.
How long? @Mike Smith was eight years old. @Duncan Keith was six while @Kris Russell and @Derek Ryan were two years old. Milli Vanilli was busted for lip-syncing. Nelson Mandela was released from prison. It’s been a long damn time.
The arena will be electric for those lucky enough to go, but whether you are in the rink, watching at a house party, or watching alone because you get too stressed out, tomorrow night will be a game you remember for a long time. Both teams are facing elimination so the angst, concern, and excitement are equal in Los Angeles and Edmonton, as well as Carolina/Boston and Tampa/Toronto. You can watch game sevens all day if you wish. The NHL hasn’t had three game sevens on the same day since April 30th, 2014.
And there is a chance we could see three more on Sunday if Dallas, Washington, and the New York Rangers are victorious tonight. If that occurs, it will tie the NHL record, set in 1992, when the first round has six series go the distance.
Seeing even four series go the full seven games in one round is rare.
1992 had six in round one.
1994, 1995, 2003 and 2011 each had four in the opening round.
So enjoy Saturday and possibly Sunday as this many game sevens in a 24 hour-span is rare. Saturday will be unreal for diehard NHL fans. 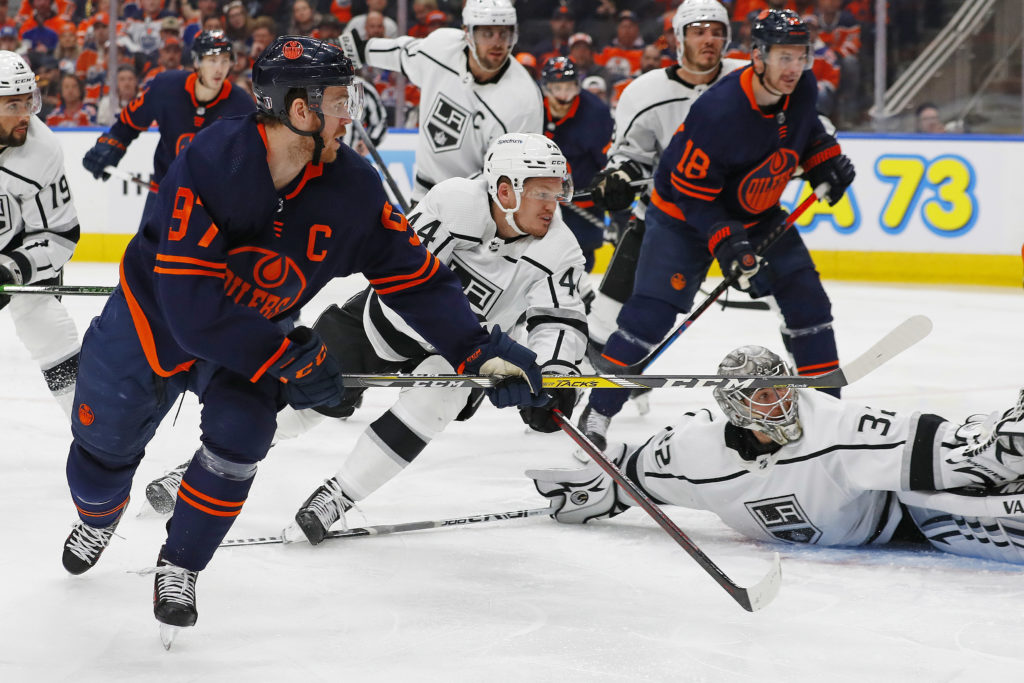 May 10, 2022; Edmonton, Alberta, CAN; Edmonton Oilers forward Connor McDavid (97) scores against Los Angeles Kings goaltender Jonathan Quick (32) during the third period in game five of the first round of the 2022 Stanley Cup Playoffs at Rogers Place. Mandatory Credit: Perry Nelson-USA TODAY Sports
1. What a performance from @Connor McDavid last night. He was a threat all game offensively, he was physical and he was determined defensively. That might have been best 200-foot game of his career. He made it known right away he was ready to play and many of his teammates followed.
2. The Oilers didn’t give the Kings many high-quality chances 5×5. @Evan Bouchard and Duncan Keith had very good bounce-back games after struggling in games four and five. They played like they did in the first three games. How you respond to adversity is huge in the playoffs and both were excellent.
3. Brett Kulak was very strong in an expanded role due to Darnell Nurse’s suspension. His skating was a major asset all game. Tyson Barrie had a monster game as well. He took the puck from Athanasiou in the Oilers’ end, moved it to McDavid, then joined the rush and scored the game winning goal. Barrie’s career numbers (SF%, GF%, xGF%) have regularly been better in the playoffs than in the regular season.
4. I don’t care what stats you look at — the grease, effort, physicality and sacrifice of Kris Russell and Josh Archibald are needed in the postseason. Archibald had another strong game. He was physical, hit the post, almost scored on a wrap around and used his speed to create havoc all game. Russell had some huge shot blocks and made many solid defensive zone plays.
5. Credit @Leon Draisaitl for battling it out after tweaking/spraining his ankle. I didn’t like the Mikey Anderson wrestling takedown/slew foot and I’m sure the Oilers would love to get retribution tomorrow. But it will have to wait until next season. You can’t do anything dumb or selfish in game seven. The concern with Draisaitl is how will his ankle react after taking his skate off. It was clear his ankle was bothering him as he lost an edge on tight turns a few times, but he played through the pain, which is what many do in the playoffs.
6. Mike Smith had another solid game. His best sequence came late in the third when the Oilers were on the penalty kill. He made three huge saves. He didn’t steal them the game, but when they needed him to be great, he was.
7. @Evander Kane and @Zach Hyman are why playing Draisaitl with McDavid together for 67% of McDavid’s 5×5 ice time is not as risky as in the past. They are legit top-six wingers and even with rookie Ryan McLeod as their centre that line made a big impact.
8. The Oilers bent but didn’t break. Giving up a 2-0 lead wasn’t ideal, but after the Kings tied it early in the third Edmonton didn’t panic. They didn’t fold. They didn’t give the game away. Instead, they played sound, smart hockey, capitalized on the Kings’ mistake (no one covered Barrie), and won the game. Edmonton has more skill in the lineup. If they play another patient, composed game tomorrow they will have a good chance to win. They’ve lost when they’ve made key mistakes or lacked intensity. They did neither last night.