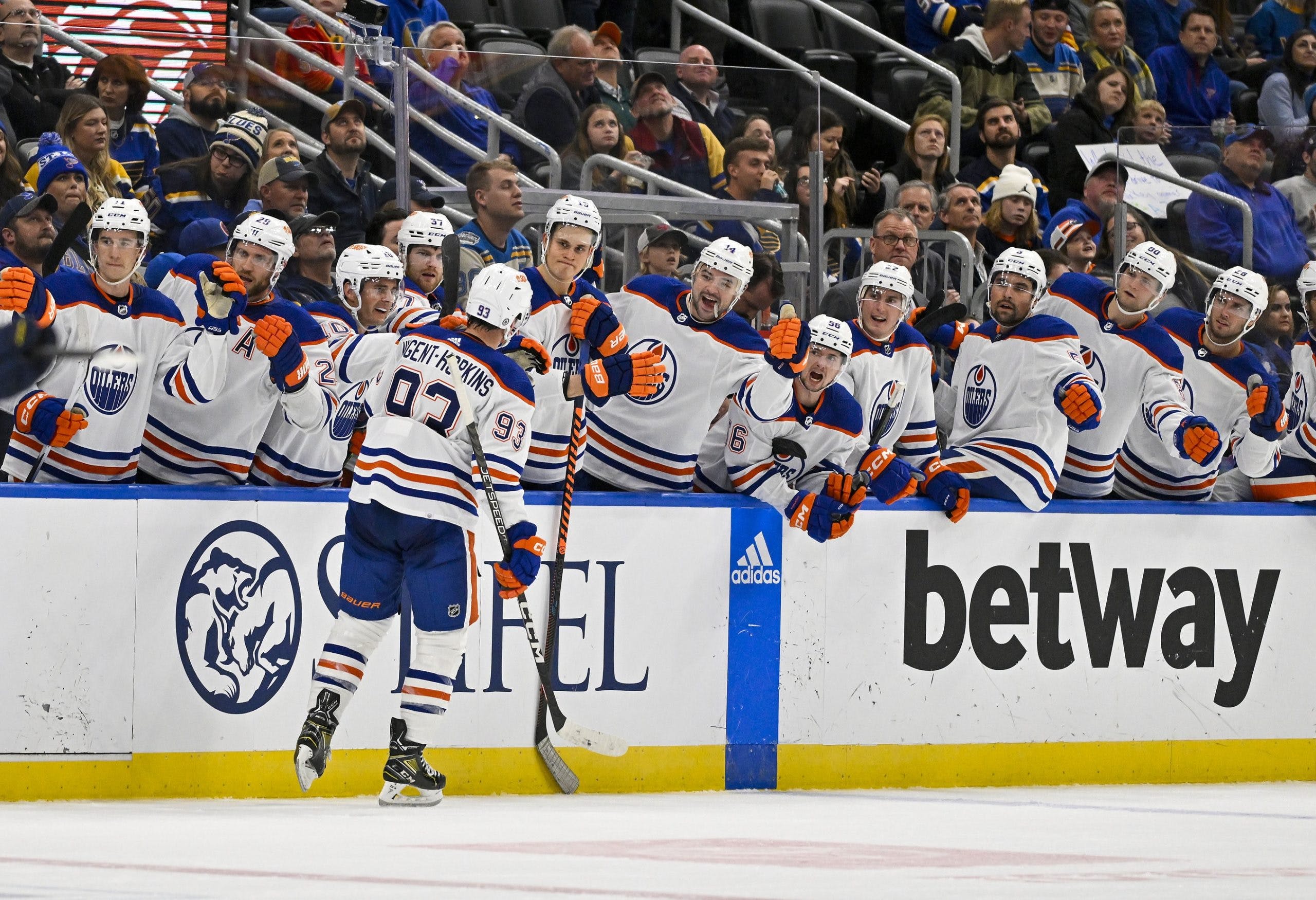 By Jason Gregor
1 month ago
Welcome to our game day content brought to you by NHL Lines site Betway!
Ryan Nugent-Hopkins has been a streaky scorer at 5×5 over the course of his career. He tallied 14 goals in 62 games as a rookie but followed that up with only two goals in 40 games in the 2013 lockout shortened season. In 2015 he set a career high at 5×5 with 19 goals then tallied six goals in 55 games the next season. In 2019 and 2020 he produced 15 goals at 5×5 each year, and he matched his career best 0.98 goals/60. However, he was unable to sustain it and the past two seasons he scored seven and six goals respectively.
He didn’t want the struggles to continue and changed his approach. It has paid off. He’s off to a great start at 5×5. He is tied with Connor McDavid and Zach Hyman for the team lead with three goals. What changed?
I’ve noticed two significant differences early on. The first one he is getting to the dangerous shooting areas more, and his shots are hitting the net more frequently than last year. Here is the comparison from last year to this season on his slot shots (SS), inner slot shots (ISS), shot attempts (SA), and shots on goal (SOG).
RNH already has 13 inner slot shots. He had 23 in 63 games last year. He’s taking four times as many inner slot shots thus far. He is not only getting to the danger areas more, he’s also hitting the net more regularly. Last year, 57.5% of his shot attempts hit the net. This season he’s at 71.7%. Shooting from a closer range increases the probability of hitting the net, and scoring more. And he’s doing both.
This morning I asked him if he made a conscious effort to get open looks from the slot and inner slot.
“I think, going back to the playoffs, I wanted to focus more on bearing down around the net and putting myself in those situations where I get those good looks and opportunities,” said Nugent-Hopkins. “It is something I’ve definitely focused on a little bit more.
“You know me well enough, I don’t pay too much attention to the stats. I just go out on the ice and try to contribute. Sometimes I’ll be in a different role, as the third line centre where it is more a protective full-ice role, so things change depending where I’m playing, but the way we have been rolling it has been a lot of fun and I want to keep contributing.”
RNH admitted scoring goals and going to those areas is a mindset, and he’s worked on instilling it within himself.
“Definitely it is a mindset, and I think it comes down to confidence a lot too,” said RNH. “If you are shooting the puck and things aren’t going well, you start to have second thoughts and doubt creeps in. Confidence goes a long way.
“It definitely is a mindset, where, okay, I’m going there, I’m going to bear down and if it doesn’t go in, I’m going back there and I’m going to bear down again. Against Calgary, I felt I could have had a couple, but it’s not going to discourage me from shooting the puck or getting to those areas.”
“It is a different mindset on the wing. Obviously, you are not as involved on the defensive side of things, so you can get up the ice more, you can lead rushes, you can go up on two-on-ones and you are often in odd-man rushes going forward. It is a different mentality and I’m starting to feel more comfortable with it,” continued RNH.
The other benefit for Nugent-Hopkins playing the wing is it is less physically taxing. He doesn’t have to be down low, engaged in battles or just covering his man, and then have to skater farther to join the rush. He was quick to point out he loves the responsibility of playing centre. He’s done it his entire career, but he noted the physical demands are lower on the wing.
As RNH ages, playing more on the wing could not only extend his career, but also extend his window to be a productive top-six forward. Less wear and tear is a good thing for players in their 30s.
It is very early in the season, but RNH’s increased goal scoring isn’t due strictly to puck luck or a hot shooting streak. He’s changed his offensive approach. He’s getting to the high-danger areas more often, and he’s shooting from there at a much higher rate than previous years. Goal scoring isn’t easy, but putting yourself in better positions to score will help any player, and he has done that to start the season.
If it continues, he might push to set a new career-high in goals.

RNH – McDavid – Hyman
Kane – Draisaitl – Yamamoto
Foegele – McLeod – Puljujarvi
Holloway – Shore – Ryan
Nurse – Ceci
Kulak – Bouchard
Niemelainen – Barrie
Campbell
The only lineup change will have Jack Campbell back in goal. Campbell has started six of the first nine games. If the Oilers want Stuart Skinner to start 32 games this season, he needs to start at least three out of every nine games, and in fact, will need to start four out of 10 to get 32 starts. He’s off to a good start, but the suggestions he’s ready to be a starter are a tad premature. Enjoy seeing him develop and improve before suggesting they thrust him into a starter role.
Campbell hasn’t played poorly overall. He’s made some huge stops, but the one area of his game he’d like to improve is his rebound control.
“Campbell’s expected Sv% off of rebounds matches what you’ve said regarding him not having great rebound control so far,” Kevin Woodley said yesterday on my radio show. “He has allowed four goals off of rebounds. Some of that might be on the team, but it is also on him and something to monitor. It can be an easy fix, simply by putting more pucks where you (Campbell) want them to go, and not kicking them into dangerous areas,” continued Woodley.
That is the one area I’ll be watching closely tonight.

Forsberg – Granlund – Duchene
Niederreiter – Johansen – Glass
Trenin – Sissons – Jeannot
Tolvanen – McCarron – Sherwood
Josi – Fabbro
Ekholm – Carrier
McDonagh – Lauzon
Saros
The Predators will switch their top two lines, with Granlund moving up to centre the first line and Johansen will move down to the second line. The fourth line isn’t for sure, but sounds like Tolvanen and Sherwood are coming in.
The Predators’ power play is awful right now with three goals on 36 opportunities. They sit 30th at 8.3%. They were sixth last season. They are averaging the third most PP opportunities/game with four, so Edmonton needs to be disciplined tonight. The Oilers didn’t allow a PP goal for the first time this season in Calgary on Saturday and are hoping that jumpstarts their PK. 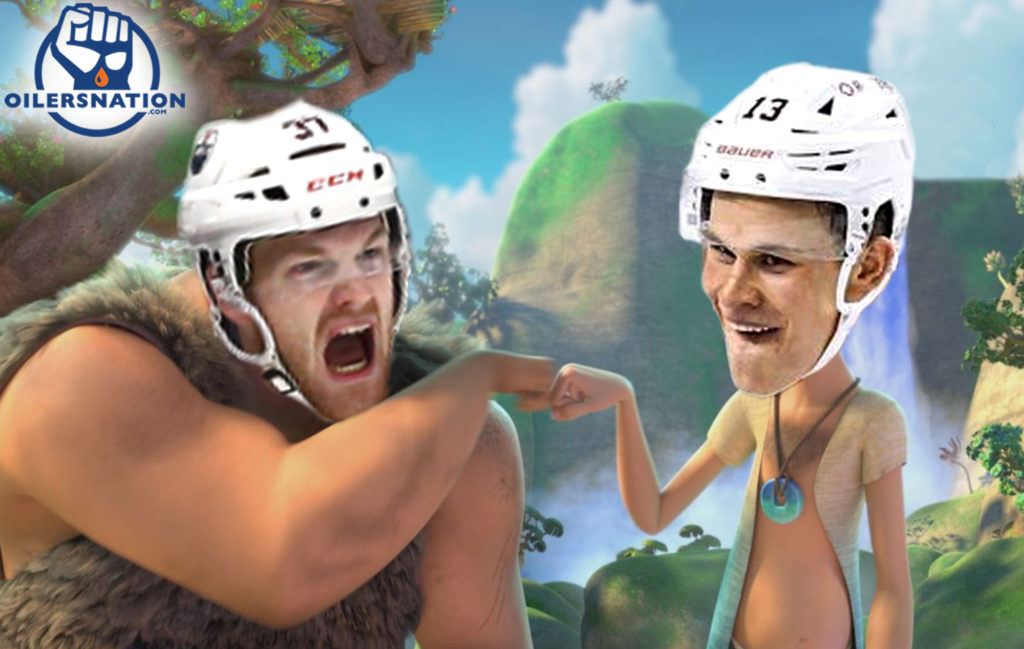