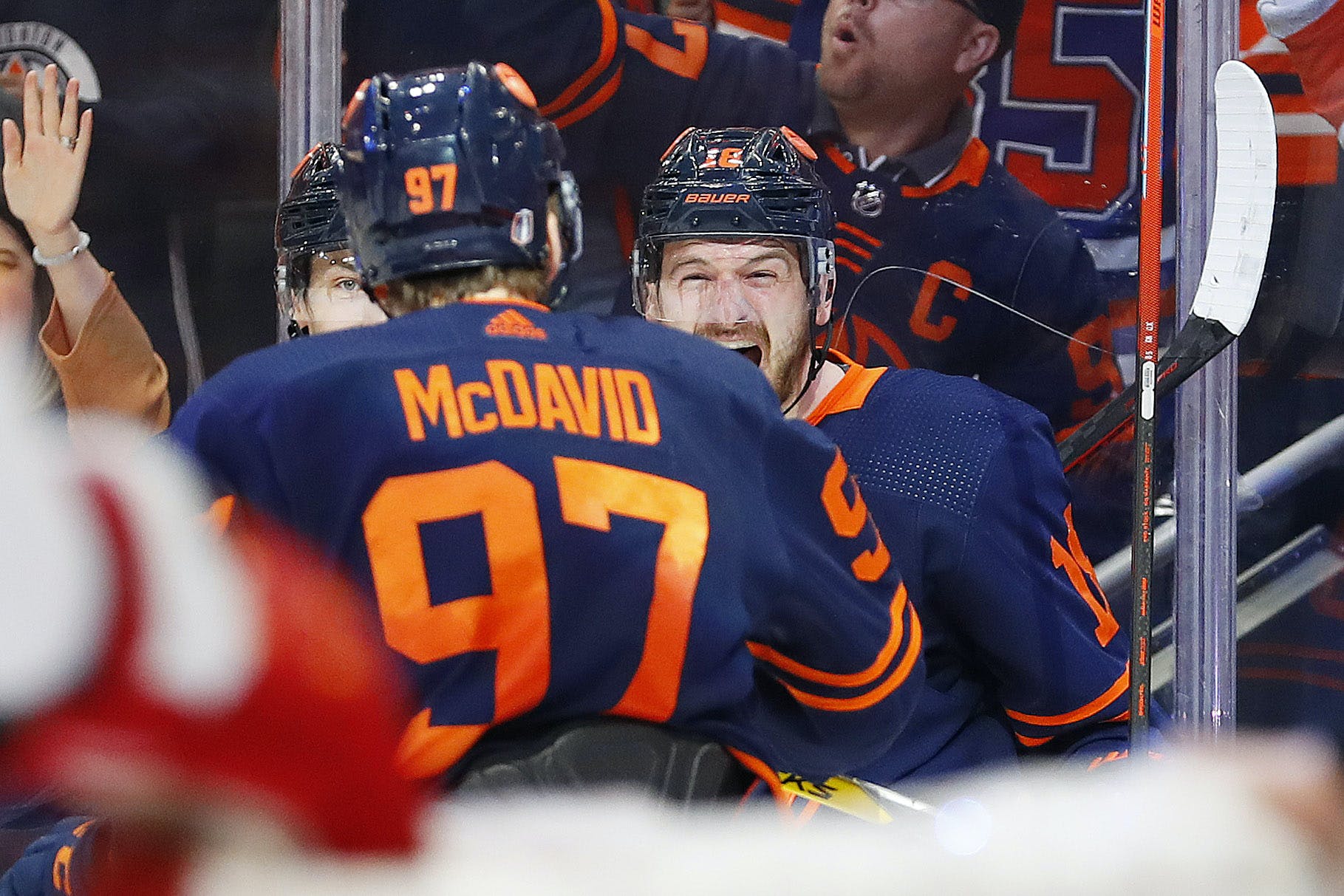 By Zach Laing
6 months ago
Well, that was far from how they drew it up.
But at the end of 60 minutes, the Edmonton Oilers managed to win 5-3 and take a 3-1 series.
It was Ryan Nugent-Hopkins who was the star of the show scoring not only the opening goal of the game, but the game-winner with three and a half minutes left in the third. He made the most of a Jacob Markstrom blunder 21 seconds into the game, then made up for a massive Mike Smith mistake by regaining the lead late.
At the 16:33 mark in the third, Tyson Barrie’s shot was stopped by Markstrom, only for Nugent-Hopkins to outbattle Oliver Kylington in front of the net to roof the game-winner.
You never want to give up a huge three-goal lead like that, but the Oilers kept playing their game the whole way. It was the bend, but don’t break the mentality that this team has carried through round one and into round two that was the difference-maker.
And in thanks to Nugent-Hopkins’ tally early, as well as goals from Zach Hyman and Evander Kane, the Oilers had a 3-0 lead after one.
Come the second, the Oilers were playing a good game. While far from pretty, they managed to control the pace of play. That was until Zach Hyman took a tripping penalty. Elias Lindholm made the most of it roofing a shot over Mike Smith and on the following shift, they scored again.
Josh Archibald turned the puck over in the offensive zone and coming the other way, Mikael Backlund beat Duncan Keith wide banging the puck past Smith.
Nerves were high the rest of the second and into the third, when halfway through the period, disaster struck.
With the Oilers on the power play, Smith played the puck up the ice only for Edmonton to be unable to keep control. 132 feet away from the Oilers net, Rasmus Andersson threw a puck towards Smith bouncing a puck past him he never saw.
It was, simply put, an inexcusable mistake.
But with Nugent-Hopkins’ goal, and an Evander Kane empty netter, the Oilers managed to take a massive 3-1 series lead. Blunder aside, that third period as a whole was exactly the type of game that helps close out big games like this. They kept the Flames to the outside, limited any big chances, and came out on top.
Edmonton came into this game with the right mindset. They didn’t want to squander a 2-1 series lead as they did against the LA Kings.
And despite more adversity, the Oilers were able to prevail. They talked the talk, and they walked the walk showing just what this team is made out of.
It wasn’t even like Connor McDavid had an outstanding game, either. Yeah, he had a two-assist night contributing to the 2-0 goal and Kane’s empty-net goal, but it was the depth of the Oilers that once again came up big.
It was the second line made up of Zach Hyman, Ryan Nugent-Hopkins and Jesse Puljujarvi that were the true difference makers. When the game was on the line, they came up big when it mattered.
Now, the Oilers will turn their eye to a game five. As Jay Woodcroft will surely say, Edmonton will enjoy this game for 10 minutes, then get ready for the most important game this team has played since 2006 — a game-five match where they can end the Calgary Flames’ season on their own ice.
Zach Laing is the Nation Network’s news director and senior columnist. He can be followed on Twitter at @zjlaing, or reached by email at zach@oilersnation.com.