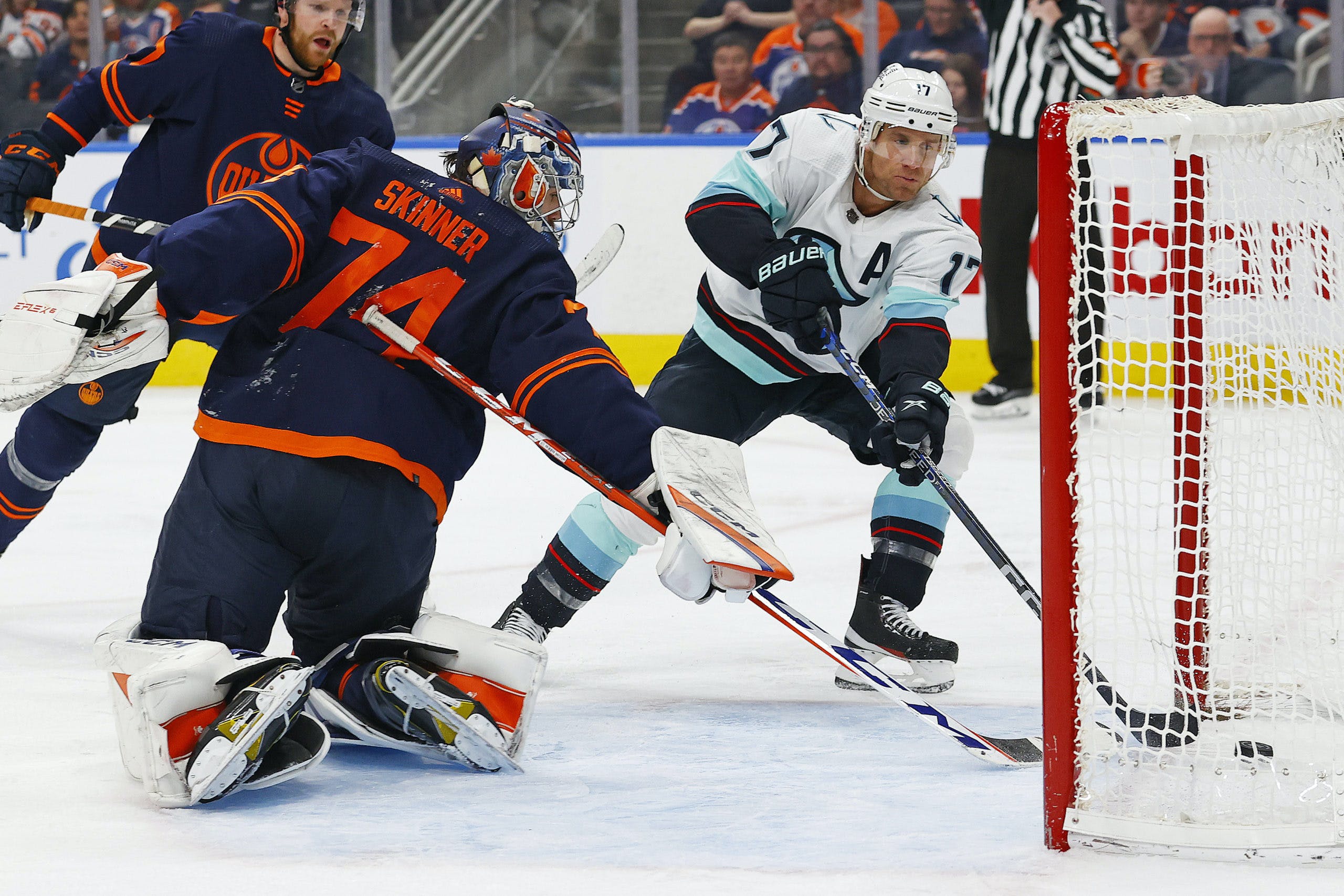 By Zach Laing
27 days ago
Twenty-four minutes of hard work to build a 2-0 lead Tuesday night was wasted away in 31 seconds.
For the Edmonton Oilers, it was another night at home where they squandered a lead allowing an opposing team, this time the Seattle Kraken, to get back in the game. It’s not a new issue for the club, either, as in three of their last four games they blew leads that cost them.
On December 23rd, the Oilers led 2-0 after one period against the Vancouver Canucks. Fourty-one seconds into the second period J.T. Miller made got on the board, and four more straight goals gave the Canucks a 5-2 win.
On December 17th against the Anaheim Ducks and their third-string goaltender, Darnell Nurse scored just 5:07 into the game, but the Oilers couldn’t hold a lead and lost 4-3.
On December 15th, the Oilers were staring down a 3-1 lead with under nine minutes to go in the game, before the St. Louis Blues scored two to force overtime. 3-on-3 didn’t solve things and Jordan Kyrou had the game-winner in the shootout.
Tonight, the Oilers saw a much similar outcome.
Goals from Ryan Nugent-Hopkins and Connor McDavid gave the Oilers a nice lead at the start of the second period. The Oilers had been playing a strong game pushing the pace of play well, but all of a sudden, the game got flipped on its head.
Evan Bouchard took an interference penalty at the 4:21 mark of the second and 23 seconds Matty Beniers scored. 31 seconds later, it was Jaden Schwartz. At the 12:42 mark, it was Yanni Gourde. At 15:48, it was Jared McCann and Stuart Skinner’s night was over. At the end of the second, it was 4-2. That score would hold and then some in thanks to a Kraken empty-net goal.
Whatever adjective you choose, that’s as dismal as the performance was. There was some push back, however. Late in the second and into the third the Oilers pushed the pace of play, but after a Leon Draisaitl goal was called back, you could feel the deflation.
The team just had no fire. No life. No legs. Soft plays in the defensive zone. Allowing opposing forwards behind the defence. No puck support when the Oilers have it. No urgency. A goaltender in Stuart Skinner who looked tired.
The Kraken got the offensive outburst they needed and then one of the stronger defensive teams in the league shut the Oilers down. It was a frustrating performance to say the least, and this recent trend of blowing leads is a symbol of larger problems this team is facing. Edmonton’s having major issues at home this season.
They have the 25th-best home points percentage at .452. They’re 9-11-1. Is this really a team that’s supposed to be contending for a Stanley Cup? Right now, they look far from it.
Next up, the Oilers host the New York Islanders Thursday, and the Colorado Avalanche Saturday before a four-game Southern California road trip.
Zach Laing is the Nation Network’s news director and senior columnist. He can be followed on Twitter at @zjlaing, or reached by email at zach@oilersnation.com.
Featured
Nation Takes
Oilers Talk
Recent articles from Zach Laing