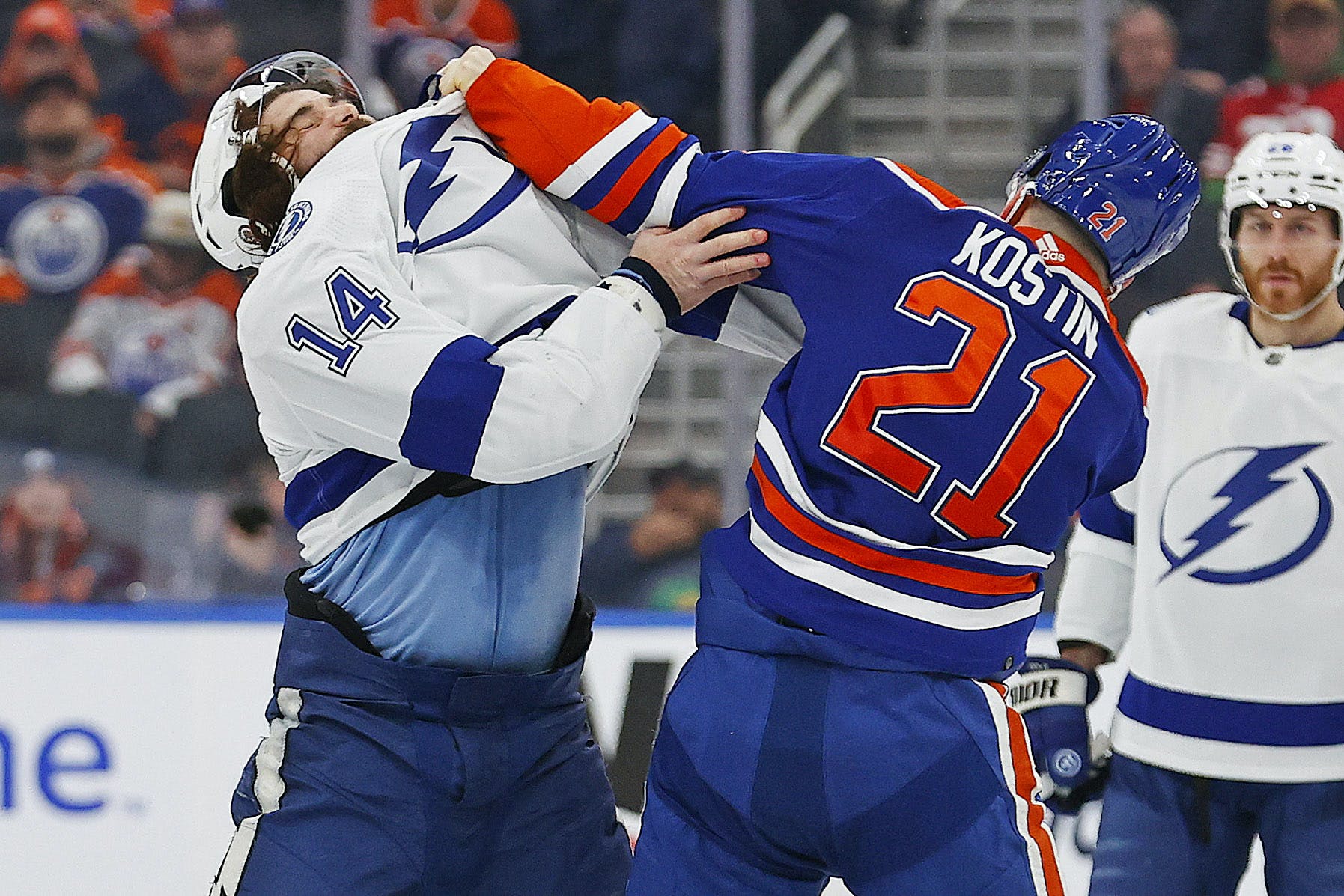 By Zach Laing
12 days ago
Playoff hockey arrived earlier than expected in Edmonton Thursday night as Oilers fans got treated to 60 minutes of what broadcaster Jack Michaels would call “pulsating hockey.”
Welcome to our Oilers game day content presented by NHL odds site Betway!
Pulsating it was as the Oilers went on to secure a 5-3 win.
The night started with a feel-good moment in warmups as Pat Maroon skated over to Evander Kane to check up on him months after his skate incidentally sliced 91’s wrist in November. Those emotions were shortlived as Maroon quickly became Public Enemy No. 1.
With the Oilers up 1-0 late in the first, thanks to an early tally from Ryan McLeod, and the team pushing for more, Maroon let out some frustration on Connor McDavid slew footing him to the ice. A subsequent little cross-check, and you can imagine what happened next. Out of the scrum, the Oilers went to the powerplay where Leon Draisaitl was quick to make them pay. Then, less than a minute and a half later, it was Nikita Kucherov who hit Kane hard from behind forcing him to crash dangerously into the boards. You guessed it, another big scrum.
Tempers boiled over as the first period expired as Darnell Nurse and Corey Perry danced at center ice. And as soon as the puck dropped for the start of the second, another set of mitts flew off — Maroon’s and Klim Kostin’s. The Big Rig had to answer the bell, and Kostin was more than happy to kick things off.
The pace of the game was fervent. Chances both ways. Breakaways and one-timers. Big hits, and big saves from two goaltenders — score notwithstanding — were dialled in at the right times.
Pesty as they come, the Lightning made it a game. Brandon Hagel, Steven Stamkos and Brayden Point all scored in the second period, as did Zach Hyman. It tightened up the game like a belt on after Christmas dinner. The decisive blow came on behalf of Connor McDavid, who 2:10 into the third period had seen enough blowing past the Lightning defenders and stuffing one past all-world goaltender Andrei Vasilevskiy for a 4-3 lead. Zach Hyman’s empty netter sealed it.
And much like they’ve shown in recent games, the Oilers once again demonstrated an ability to shut their opponents down in the third period. Edmonton controlled 63.64 percent of the shot attempts in that frame as well as 58.33 percent of the scoring chances and a staggering 76.22 percent of the expected goal share.

If we really want to talk about dominant performances, look no further than the pairing of Philip Broberg and Evan Bouchard. There’s something that has brewed quickly between this duo and they are absolutely taking the league by storm. I mentioned on Twitter a few days ago how they’ve climbed the ranks in terms of their ability to control shot attempts and expected goals (which is really a shot quality metric), and tonight they were on it again.
With Broberg and Bouchard on the ice at 5×5, the Oilers outshot attempted the Lightning 18-2 (90%), outscored them 1-0, and controlled 92.57 percent of the expected goal share (.91-0.07). They also controlled the scoring chance share 7-2 (77.78%) and allowed no high-danger scoring chances. While they did get favourable zone starts and faced bottom-six competition, most of the night, these are still numbers not to take lightly. This is a legitimate NHL pairing we’re watching flourish before our eyes.
All in all, the Oilers have strung together quite a stretch of games here. They’ve taken care of business against lesser opponents in Anaheim and San Jose, and looked like a force to be reckoned with eliminating the Vegas Golden Knights, Seattle Kraken and tonight, the Tampa Bay Lightning.
Things get interesting for the Oilers now. Before the all-star break that kicks off on Jan. 29, the Oilers play the Vancouver Canucks, Columbus Blue Jackets and Chicago Blackhawks. The following five out of the break? The Detroit Red Wings, Philadelphia Flyers, Ottawa Senators and Montreal Canadiens.
The rest of the Pacific Division needs to be on high alert.
Zach Laing is the Nation Network’s news director and senior columnist. He can be followed on Twitter at @zjlaing, or reached by email at zach@oilersnation.com.
Featured
Nation Takes
News
Oilers Talk
Post Game
Recent articles from Zach Laing