Highlights and Numbers: Leon Draisaitl jumps to the top of the NHL’s scoring lead in Edmonton’s dominant win over Nashville By Cam Lewis
1 year ago
The Edmonton Oilers are 8-1-0 to start the 2021-22 season, which matches their best start in franchise history.
To find the last time Edmonton won eight of their first nine games, you have to go all the way back to 1985-86. That Oilers team, in the prime of their dominant dynasty run, ultimately went 56-17-7 on the season.
The Oilers did a lot of things well on Wednesday night in their 5-2 win over the Predators. While they played a somewhat sloppy and inconsistent game against Seattle on Monday, they really cracked down against a stronger opponent in Nashville.  Dave Tippett juggled the forwards, Edmonton got offence from three different lines, the blueline was largely tight and solid outside of a couple of ugly gaffes, and Mikko Koskinen was sharp when he had to be.

Another game, another power-play goal. The Oilers opened the scoring a few minutes into the first period while Mikael Granlund was watching from the penalty box. This highlight shows just how cognizant the Oilers are of each other when on the ice with the man advantage.
Connor McDavid slowly carries the puck up around the top of the zone. While he’s doing that, Jesse Puljujarvi is setting himself up in front of the net and distracting one of Nashville’s defenders. Meanwhile, Leon Draisaitl is sneaking behind the net. McDavid drops the puck off to Ryan Nugent-Hopkins who immediately fires a no-look pass to Draisaitl.
It looks for a hot second like the Oilers are scrambling a little bit and then, bam, two quick passes, and the puck is in the net. Amazing stuff.
Nashville was able to tie the game immediately after as the Duncan Keith and Cody Ceci pairing wasn’t able to break the puck up the ice after the faceoff. Ceci fired a pass into pressure and pinched up in order to try to work the puck up the ice. Meanwhile, Matt Duchene snuck behind him, picked up the puck, went in on a two-on-one, and sniped a shot past Mikko Koskinen. Ceci would be better off just staying back and playing conservatively after that failed breakout pass.
The Oilers grabbed the lead again early in the second period when the second line converted for an even-strength goal.
Nugent-Hopkins slides up to support Ceci and Keith at the blueline and takes a quick, low shot on Nashville’s net from the point. While that’s going on, both Zach Hyman and Kailer Yamamoto are screening Connor Ingram in front of the net. The puck bounces off of Hyman and right to Yamamoto for an easy tap-in.
Given how bad Yamamoto’s puck luck had been early in the season, he deserves a few of these bounces. But, also, this goal is due to the great work that he and Hyman did in front of the net. You can make your own luck by playing hard.
The Oilers went up 3-1 in the third period on yet another goal from Draisaitl, this one at even-strength.
McDavid grabs the puck in Edmonton’s zone and charges up the ice, pushing Nashville’s defenders back on their feet. Draisaitl slides behind him and McDavid drops the puck back. Nashville’s defenders just sort of stand there and wave their sticks around and Draisaitl snipes a shot right through Ingram.
The funny part about this play is how No. 26 on Nashville, rookie Phillip Tomasino, actually does a good job at backchecking and getting himself into a position to make this play difficult for Draisaitl, but he just slows up and doesn’t actually make any kind of effort to disrupt the shot. When you have a shooter as good as Draisaitl in the slot, you have to be all over him.
And then there’s the dagger, which came just over a minute later. This time, it was the bottom-six getting into the mix.
Devin Shore carries the puck up to inside the blueline and dished it off to Tyson Barrie, who fires it deep into Nashville’s zone. The puck makes it all the way around the net where Warren Fogele jumps up and wins a battle before firing a pass into the slot to Shore, who rips a one-time snap past Ingram.
This is excellent work by Edmonton’s third line to push the puck deep and win battles in order to maintain pressure. It was also great to see Shore bury a goal because he had an excellent game all around.
Nashville would score late on the power-play to make the score 4-2 but the Oilers put the game away just over a minute later when Draisaitl fed a pass to Jesse Puljujarvi in front of the Predators’ empty net. Draisaitl was staring down a hat-trick but he still fed Puljujarvi the pass before the open net, a very selfless move. 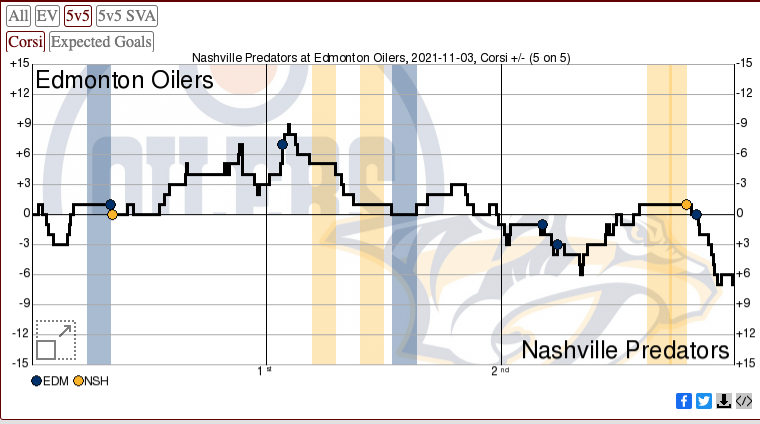 Much like the Seattle game on Monday, the Oilers weren’t always the team dominating possession on Wednesday night, but they were significantly stronger at converting on their opportunities. The shot attempt chart is fairly equal for the majority of the game but Nashville expectedly pulls ahead later on as the Oilers went into defense mode late in the third with the lead.
While Nashville carried the play for periods of time, Edmonton’s defence did a good job at keeping them to the outside so they couldn’t generate too many high-danger chances. And, of course, on the flip side of that, the Oilers were able to turn possession into chances and chances into goals. They had three different lines pushing and generating offence and Nashville’s defence simply didn’t have an answer.
I mentioned earlier that Shore had an excellent game and the numbers certainly back that up. He started off on the fourth line with Brendan Perlini and Kyle Turris but got promoted to play with Zack Kassian and Warren Foegele. Here’s how his two lines fared at even-strength…
I’m not sure that Shore can be the long-term solution as Edmonton’s third-line centre but he certainly earned the promotion. The fourth line simply dominated and then Shore earned himself a goal after he was bumped up to play with the stronger wingers.
Another interesting thing to note was that Dave Tippett juggled the top-six mid-game and the second line wound up with better results when Draisaitl was placed on McDavid’s wing.
The Draisaitl, Nugent-Hopkins, Yamamoto trio got hammered 7-to-1 in shot attempts, but, when Draisaitl switched with Hyman, the new second line went 5-to-5 in shot attempts and put up a 90 expected goals for percentage given the quality of chances they generated.
There isn’t much to look into here, I don’t think, but it ultimately shows how much better Edmonton’s depth is now up front. If things aren’t working in the top-six, Tippett can unite the McDrai combo without completely decimating the second line.
One more note… With a three-point game on Wednesday, Draisaitl is now the league’s scoring leader with 20 points in nine games. McDavid sits second, right behind him with 19 points in nine games. Next up after that is Alex Ovechkin, who has 15 points in nine games, and kyle Connor, with 14 points in nine games.
I would venture a guess that McDavid and Draisaitl are going to finish first and second by a wide margin. The real race here will be between the two teammates.
News
Post Game
Recent articles from Cam Lewis