By NHL_Sid
8 months ago
With back-to-back wins over the Los Angeles Kings in the first round of the playoffs, things look encouraging for the Edmonton Oilers. They’ve scored a whopping fourteen goals in the last two games combined.
It’s been a complete effort for Edmonton in general, and there’s a large list of players to give credit to. One of the more underrated performances as of recent and in the playoffs so far?
Cody Ceci.
At the start of the season, there was debate over if Tyson Barrie or Evan Bouchard should play as the top RD alongside Darnell Nurse. Barrie and Bouchard often rotated, and although Bouchard was brilliant offensively as the 1RD, both of them often struggled defensively.
However, ever since Jay Woodcroft’s hiring, Ceci has primarily occupied the role as the team’s 1RD, and he hasn’t just been treading water or playing ~average; he’s thrived, and has been quite reliable.
In this piece, I’ll dive into Ceci’s recent play, and how his recent emergence has been exceedingly beneficial for the Oilers.
*All microstats courtesy of Corey Sznajder and all other stats via EvolvingHockey and PuckIQ unless stated otherwise

Ceci’s results under Tippett vs Woodcroft 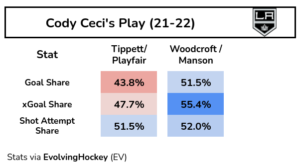 Primarily paired alongside Duncan Keith, Ceci wasn’t anything exceptional at the beginning of the season.
He was solid in regards to CF%, but ranked as a negative in xGF%. Combine this with some poor luck, and the result was a brutal goal differential. These metrics were mostly due to his putrid and inexistent offence, and he just didn’t seem to fit into Tippett’s system.
Additionally, the duo of Keith – Ceci was often burned off the rush at an alarming rate. Keith’s primary issue is defending the entry, while Ceci’s defensive value comes from his in-zone defending, so his average entry defence skills were certainly not enough to make up for Keith’s shortcomings in this facet. Consequently, this resulted in numerous chances off the rush against.
Ceci’s defensive and especially offensive metrics have markedly improved under Woodcroft and Manson, as he’s been paired mostly with Darnell Nurse.
“The guys are paying a lot more attention to the details,” Ceci said several weeks prior on the Jason Gregor Show, when talking about the impact of the coaching change. “They’re really buying into the system, and they’ve been on us to stay up, gap up more, and trust our forwards to track back, and I think we’ve done a much better job at that.”
This season, Ceci and Nurse have a 53% goal share and a 54% expected goal share together. The vast improvement in Ceci’s metrics is impressive after considering that he’s played a significantly more demanding role ever since Tippett’s firing.
Here’s a look at how Woodcroft and Manson have deployed each defenceman at 5v5:

Fascinating results overall.
Keith – Bouchard have posted strong metrics from an overall perspective, but their positive results are predominantly against sheltered competition; their performance against top lines and top defensive pairs has been inefficient. Kulak has performed exceptionally well against elites, but he’s accomplished this in a more limited sample.
Meanwhile, Nurse and Ceci have been fed to the wolves; Nurse has played over 50% of his time against opposing top lines while Ceci is at 45.7%.
For comparison, Ceci was at 30.7% under Tippett, and the average top-pairing defenceman spends roughly 37-40% of their time against top opposition. Both of them have produced positive DFF% numbers against elites.
Furthermore, Ceci has also taken a considerable amount of shift starts in the defensive zone. Per PuckIQ, Ceci has taken 178 DZ Shift Starts in 78 regular-season games, the most on the team.
He’s actually excelled after a shift start in the DZ relative to the team; among Oilers defencemen, he ranks 2nd in both DFF% and DFA/60 after taking a DZ Shift Start.
In simpler terms, he performing an exceptional job at preventing scoring chances and shot quality against after shift starts in the defensive zone. Consequently, it seems like Ceci plays at his best when tasked with a challenging role. The ability to succeed and thrive when facing top opposition and after being tasked with a shift start in the DZ is quite impressive.
“It is a tough job, some nights harder than others,” Ceci had said, “but yeah, it’s something that we have to focus on and take pride in. It’s not always about putting up points, sometimes it’s just about shutting down the other team and making sure they don’t get any points.”
Meanwhile, Darnell Nurse ranks 2nd last on the team in DFA/60 after a shift start in the DZ.
It’s why Ceci has been a solid defensive fit with Nurse; Nurse’s primary issue at this stage of his career remains his in-zone defending capabilities, as I wrote in-depth several weeks back. On the contrary, it’s evident that Ceci is a quite reliable In-Zone Defender. His average shot quality against (xGA/FA) ranks in the 68th percentile, and as mentioned previously, he performs quite well after a DZ shift start.
Ceci doesn’t always hold or deny the blue line, with his Zone Denial% merely ranking in the 39th percentile. Instead, he obtains above-average defensive results from playing deeper in the defensive zone and protecting the front of the net, and I think he does a fine job at occasionally covering for Nurse’s errors as well.
Furthermore, as mentioned previously, another considerable factor for Ceci’s improvement is his recent surge in offence. Ever since Woodcroft/Manson’s hirings, Ceci has a 3.22 xGF/60, which is considerably superior to his prior xGF/60 of just 2.17 under Tippett/Playfair.
Another fun fact; since the arrivals of Woodcroft and Manson, Connor McDavid has out-chanced the opposition 62 – 28 in regards to high-danger chances with Ceci on-ice, a differential of 68.9%. Without Ceci, McDavid is 110 – 77 in HDCF, a differential of 58.8%.
Of course, due to the sample size, I’m not necessarily implying that Ceci significantly improves McDavid’s play to any extent; it’s just worth mentioning that Ceci and McDavid have been a splendid fit recently. Ceci has been able to hold his own without McDavid as well, with a 50.1 xGF%.
To dive deeper into Ceci’s microstats, he’s a decent puck-mover. Ceci’s Zone Entries/60 is in the 62nd percentile, and his Entries with Chances/60 is in the 60th percentile. Nothing exceptional, but just worth noting that he’s a decent contributor in entry transition.
Additionally, he’s also a solid breakout passer, with his DZ Shot Assists ranking in the 58th percentile, and his NZ Shot Assists ranks in the 78th percentile.
Ceci’s offensive improvement can also be attributed to increased playing time alongside McDavid and Nurse, and I feel he’s performed fine as the “support” D alongside Nurse. While Nurse does more of the heavier offensive and transitional lifting, Ceci excels at staying back deep, and performing as a supporting defenceman for both Nurse and the forwards in terms of breakouts. Occasionally, he’ll individually lead the rush into the offensive zone as well. To my eye, I think Ceci is also quite good at holding pucks in at the blue-line.
Under Woodcroft/Manson, it seems like Ceci has been deployed as the primary in-zone defender from a defensive perspective, and a support/complementary player from an offensive perspective. It’s evident that it’s an excellent and quite preferable role for him.
It’s safe to say that Ceci’s recent play in this strenuous role has undoubtedly surpassed expectations.

In Game 1, Ceci did somewhat struggle, posting a poor 28% expected goal differential, and the team was out-scored 1-2 with Ceci on-ice. However, he was significantly superior in the following games.
In Game 2, Ceci posted a 100% goal share, and a 61% expected goal differential. In last night’s beating in Los Angeles, Ceci posted an 83% goal differential (+4 overall), a 67% expected goal differential, and even finished with three assists.
Producing these sorts of results is one thing, but continually posting them while playing nearly 50% of your time against the opposing team’s top players, while also being able to take a high number of shift starts in the defensive zone? It’s certainly a useful and valuable skill set, especially in the playoffs.
I’ve been correct on numerous things this season, but I’ve also been wrong on others this season/last off-season.
One of the players I was incorrect on was Cody Ceci. His recent play has been superb, and hopefully, it can persist as Edmonton aims for a deep playoff run.
Find me on Twitter (@NHL_Sid)
Nation Takes
Oilers Talk
Recent articles from NHL_Sid