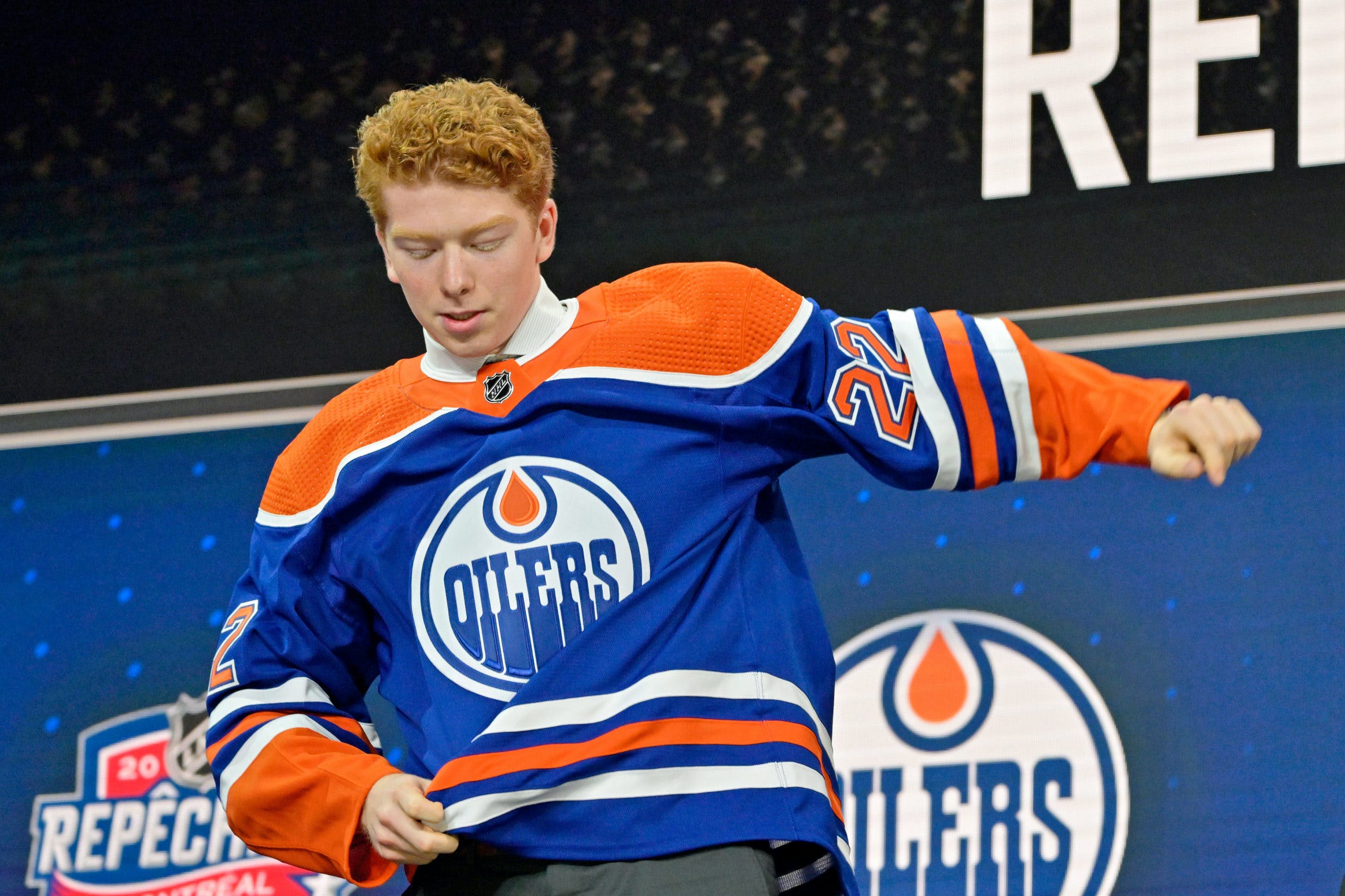 By Zach Laing
6 months ago
The 2022 NHL entry draft has come and gone.
And just like every year, it’s time to take a look at the Oilers draft class, and how experts across the industry graded the picks.
The Oilers had a small class. In the first round, they took Seattle Thunderbirds winger Reid Schaefer 32nd overall, but had to wait until the fifth round for their next pick. There, they selected Swedish goaltender Samuel Jonsson before taking Russian defenceman Nikita Yevseyev in the sixth round and Joel Maatta in the seventh.

On the draft class as a whole: I love Reid Schaefer and think he can become a middle-of-the-lineup NHL winger, but after him the Oilers didn’t pick again until 158, giving this draft class very little depth beyond Schaefer.
On Schaefer: Schaefer’s NHL appeal is due to being a 6-foot-3 winger with legit skill, scoring touch and tenacity. He’s able to use his size and hands to create offense around the net, while also having an excellent wrist shot to score from range. He has value away from the puck, with a strong work rate, good physicality and can PK. He’s never historically been a big scorer, but his puck game and playmaking kept impressing me as the season went along and his role elevated. He looks like a future middle-six power winger with the potential to play high in a lineup if he really hits.
On Jonsson: Samuel Jonsson is a large goaltender who played all season in Sweden’s J20 league with Brynas and had inconsistent performance.
On Yevseyev: Yevseyev skates and competes well enough and can outlet pucks fine but the offensive upside in his game is a question.
On Maatta: Maatta is a competitive and smart center who can PK and play hard minutes, but he lacks the speed/skill combo you’d like to see for the NHL.

With a late first-round pick and only three other picks, the next of which was 158th overall, the Oilers were not in position to score a particularly strong letter grade. They have some interesting pieces with their late-round picks including 6-foot-5 goalie Samuel Jonsson, who fits an organizational need. Schaefer is the player to carry the class and I think he’ll be a good prospect, but probably not a star-caliber player. Edmonton just didn’t really propel a below-average prospect pool much further.

Armed with only one pick of real consequence, it’s hard to trash the Oilers’ draft too hard. With that one pick, the Oilers selected Reid Schaefer, a physical winger with handling skill. He has moments of playmaking ability, but he’s not much of a puck protector or inside attacker, two of the most important skills for a player of his ilk. We ranked him just outside the top-100.
Their next three picks – Samuel Jonsson, Nikita Yevseyev, and Joel Määttä – didn’t even register on our draft radars. Määttä’s a sound defensive pivot with a small-area playmaking game, but has no track record of point production at any level and skating limitations.
Schaefer’s likely to play games, but don’t expect any needle-movers.

My grades of the grades

I think they’re fair. At his best, I think Schaefer projects as a middle-six complementary winger and the late-round picks are complete flyers who, at best, might be organizational depth pieces at some point.. There’s not much Edmonton could’ve done better given their limited ammunition.
Zach Laing is the Nation Network’s news director and senior columnist. He can be followed on Twitter at @zjlaing, or reached by email at zach@oilersnation.com.