How should the Oilers deploy their centers at 5v5? By NHL_Sid
1 month ago
While it’s becoming increasingly clear that the Oilers have numerous flaws in their roster, it’s evident that their primary strength is their center core.
Edmonton is the only team in the league with three players in the top ten in total points. McDavid and Draisaitl rank 1st and 2nd respectively, as usual, but Ryan Nugent-Hopkins is tied with Artemi Panarin for tenth place, with 41 points in 35 games. Currently, it’s safe to say that no team possesses three superior centers to McDavid, Draisaitl, and RNH.
The Oilers also have Ryan McLeod, a reliable defensively-minded bottom-six center. McLeod was out with an ankle sprain against the Rangers several weeks back, but he finally returned against Vancouver last night.
Edmonton ranks 21st in the league in 5v5 goals per hour this season. While Ken Holland should certainly pursue defencemen to add at the deadline, finishing and 5v5 offence seem to be major areas for improvement as well.
Draisaitl, RNH, and McLeod can all effectively play at wing. With all of this in mind, a question remains; how should the Oilers deploy their centers? What’s the most preferable option that grants the team the best opportunity to succeed at 5v5?
*All microstats via Corey Sznajder, all other stats via EvolvingHockey and Natural Stat Trick unless stated otherwise

A glance into Draisaitl’s metrics at center 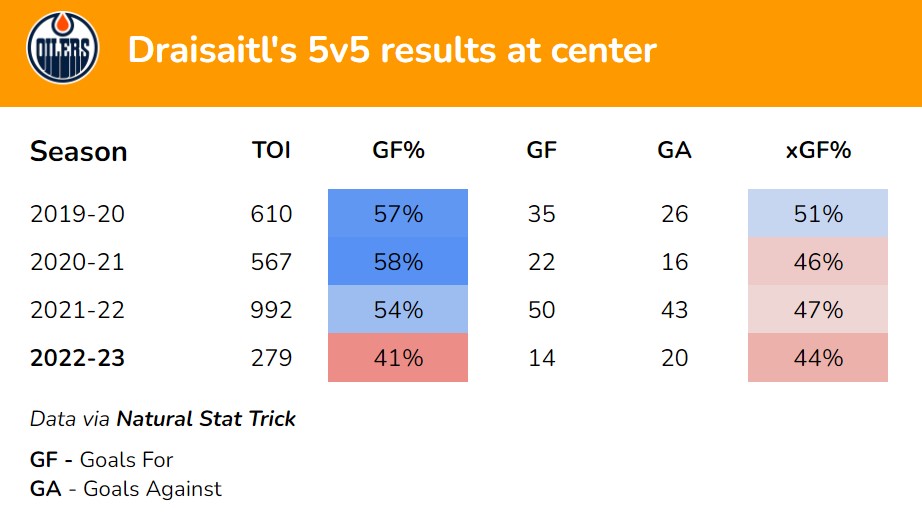 Draisaitl’s results at center this year are not good.
In years prior, it was simply an unfactual claim and a myth that Draisaitl was a “product” of McDavid. At 5v5, Draisaitl had consistently driven a strong second line from 2019-20 to 2021-22, in a sample of nearly 2200 minutes of play. In total, Draisaitl’s line had out-scored opponents 107 – 85 without McDavid.
The expected goal differential was substandard, but Draisaitl is one of those rare players with superb finishing and passing abilities that causes him to consistently outperform public xGoal models. The Oilers have been mediocre at 5v5 for quite some time, but for those seasons, Draisaitl doesn’t deserve the bulk of the blame. At all.
However, this season, Draisaitl has struggled at center without McDavid. His line has been out-scored 14 – 20, and his possession and scoring chance metrics are at the lowest it’s been in five years. He’s especially struggled with Zach Hyman; Draisaitl and Hyman have been out-scored 3 – 9 (a horrendous 25% goal share) on the second line together, with a 42% expected goal share.
It’s difficult to exactly pinpoint why Draisaitl had an excellent track record at center for over 2100 TOI from 2019-2020 – 2021-22, yet suddenly fell off a cliff in this regard for this season. Perhaps some of it is simply a lack of effort, but it was hinted on Oilers Now that Draisaitl wasn’t entirely healthy. It’s possible he hasn’t fully recovered from his high ankle sprain sustained in the 2022 playoffs.
Whatever it is, this is an area that Draisaitl must improve in. Considering Ken Holland’s poorly built bottom-six, the team would significantly benefit from a second line that can consistently out-score opponents.
I would still say Draisaitl is an elite center because 2169 TOI is significantly more reliable than 279 TOI, especially considering the possibility of injury during the latter sample, but this is something to keep in mind. 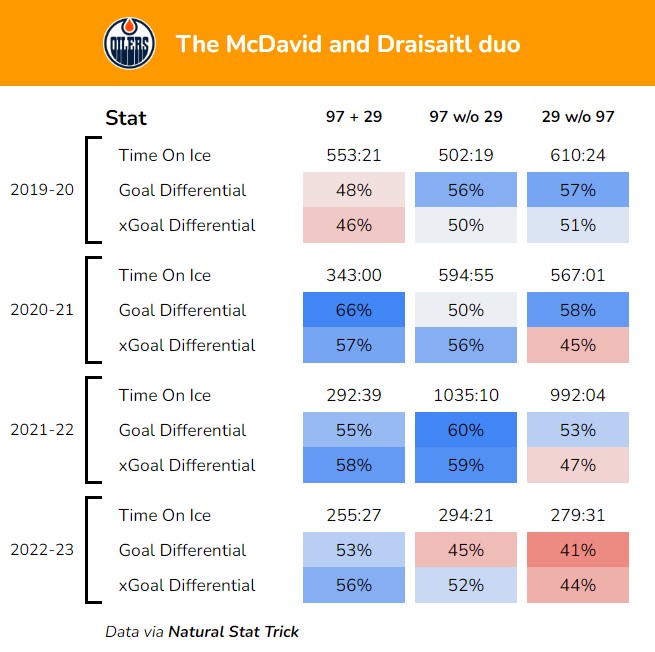 The dynamic duo has had some inconsistent results throughout the years.
In 2019-20, they were abysmal together defensively, notably in the month of December 2019. Their struggles eventually led to the “DRY” line of RNH – Draisaitl – Yamamoto, a trio that was dominant at 5v5 and were the primary driving force behind their 5v5 resurgence in the second half of that season. Despite an awful cast of wingers, McDavid managed to post strong results without Draisaitl as well.
The following season was fascinating. McDavid faced some poor luck without Draisaitl, but nonetheless, he was dominating possession and scoring chances. Meanwhile, Draisaitl’s line was outstanding in regard to GF%. Together, both of them were even better, albeit in a lower sample. Overall, though, both players were strong with and without each other.
The trend continued into 2021-22. McDavid and Draisaitl were quite good together again, but McDavid was even better at centering his own line, with an exceptional 60% goal share and 59% expected goal share. Draisaitl was also at a major positive in goal differential without McDavid.
Heading into this season, it was extremely fair to deduce that it was best for them to play on their separate lines. It was a superior option due to the overall line balance it provided. They could produce exceptional offence together, but they undoubtedly possessed the ability to independently drive a strong line that can effectively and consistently out-score opponents at 5v5 without each other.
This season, it’s a bit of a different story. As mentioned previously, Draisaitl has struggled at center. McDavid has had some poor luck at 5v5 and still grades out as a strong 52 xGF% without Draisaitl, but it’s nowhere near the levels that it previously was. Both players performed significantly better together.

Looking into RNH’s metrics at center

It’s a bit more difficult to gauge RNH’s overall ability as a 5v5 center due to Edmonton’s lack of winger depth over the years. McDavid and Draisaitl end up having the best wingers, meaning RNH plays with inferior linemates.
To make it fairer, here’s a look at RNH without McDavid and Draisaitl, as opposed to the team without all three of them: 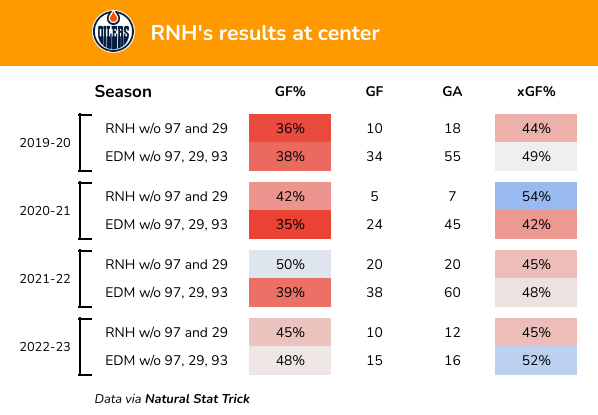 Similar to McDavid and Draisaitl, Nugent-Hopkins also struggled as a 2C in 2019-20, as the team was out-scored 10 – 18 with him playing as a center. The team without McDavid and Draisaitl was actually superior without Nigent-Hopkins as opposed to with. That is a concern, although he was exceptional as a LW on the “DRY” line that season.
In a smaller sample, Nugent-Hopkins fared well in terms of xG% and possession as a center in 2020-21, although he experienced some poor luck, leading to a poor goal differential. The subsequent year, it was the opposite; RNH broke even in goals without McDavid and Draisaitl, although he struggled at driving play.
This season, RNH has been out-scored and out-chanced by a considerable margin in his time as a center, while the bottom-six without him is surprisingly a net positive in xGF%, and is nearly at net-even in goal differential.
All-in-all, some fascinating and varying results. It’s safe to say Nugent-Hopkins doesn’t have an exceptionally stong recent track record as a center, and it seems like he’s superior as a winger.

How good is McLeod?

I wrote all about McLeod here. McLeod is a superb defensive forward, as his impact on suppressing scoring chances in the past 2 seasons ranks in the 87th percentile; put differently, he’s superior to 87% of the league’s forwards in 5v5 defensive impact. This season he ranks 60th out of 370 forwards in this aspect.
He’s one of Edmonton’s best forecheckers, and last season, he ranked 3rd in the entire league in defensive-zone retrievals leading to exits per 60. McLeod is certainly one of Edmonton’s more responsible defensive forwards.
McLeod is also very strong in transition; he ranked 4th on the team in controlled entries per hour last season, and 2nd in controlled exits per hour, higher than even Draisaitl. These transition results are quite reflective of how good a skater he is.
While McLeod does several things the right way, McLeod’s major areas of improvement moving forward are shooting and passing, some pretty significant aspects of the game. He doesn’t generate a lot of high-danger opportunities near the front of the net.
Still, he’s capable of performing as a fine defensively-minded 3C, and at age 23, it’s reasonable to expect that he will improve.

With all of this in mind; what should the Oilers do?

The Oilers have three primary options.
The first option is to revert back to McDavid and Draisaitl on the top line, with RNH at 2C, and McLeod at 3C. The second option would be to run McDavid, Draisaitl, and McLeod down the middle, with RNH playing as a winger in the top six, and the last option is to have McDavid, Draisaitl, RNH, and McLeod all center their own lines. The latter is what they most recently explored against the Vancouver Canucks last night, but my preference is with the second option.
The hope would be for Draisaitl to improve at center, and I think there’s a fine chance he will. Again, his metrics over a significant sample in the prior three seasons have undoubtedly proven he can drive a line, and the team becomes much more balanced with McDavid and Draisaitl on separate lines. I would run Draisaitl at 2C without Hyman, as their defensive results together have been abysmal.
RNH can still be a fine 3C, especially considering the weaker competition he’ll face in that role, but I personally prefer him as a winger. This season, McDavid’s possession and scoring chance results are actually superior with RNH as opposed to without. RNH and Draisaitl have also shown stretches of strong chemistry together in the past. I think RNH can successfully fulfill the role of an effective two-way winger with either McDavid or Draisaitl.
Still, there are varying positives and negatives to each option. The alternative of running McDavid, Draisaitl, RNH, and McLeod down the middle would be more viable with better winger depth, and perhaps that’s a superior choice when Evander Kane returns from injury.
Merry Christmas to all of you amazing people in OilersNation! Wishing you and your families a happy holiday season. 🙂
Find me on Twitter (@NHL_Sid)
Editorials
Featured
Oilers Talk
Recent articles from NHL_Sid