How should the Oilers deploy Dylan Holloway? 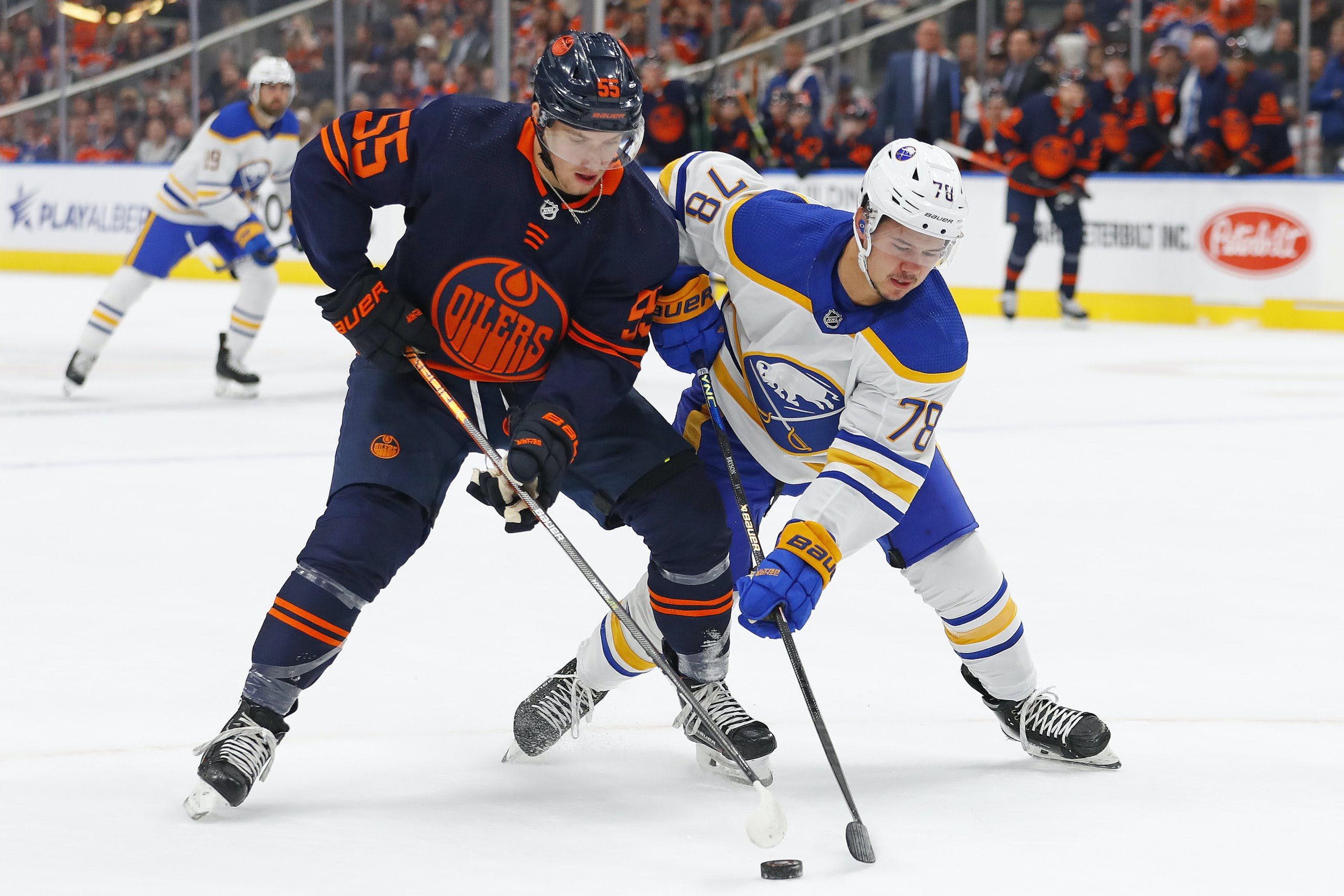 By NHL_Sid
2 months ago
Arguably Edmonton’s most promising prospect is forward Dylan Holloway. Drafted 14th overall in 2020, Holloway played his first NHL game against the Colorado Avalance during the Western Conference Finals last season.
Heading into 2022-23, Holloway was a solid bet to make the NHL roster, largely due to his potential and Edmonton’s exceedingly tight cap situation. He had an excellent performance in the pre-season, which included a hat-trick, and he earned a spot in the NHL top-six alongside Leon Draisaitl on opening night.
However, he had a turnover that led to Vancouver’s first goal of the season. Subsequently, he only averaged around 8 minutes in the first two games of the season, and then got injured during a massive hit from Ilya Lyubushkin in the third game against Buffalo.
Ever since returning from injury, Holloway has played on the fourth line with Derek Ryan and Devin Shore. In spite of only playing five minutes, he picked up his first NHL point against Calgary last Saturday; a secondary assist on a goal from Connor McDavid.
Against New Jersey on Thursday night, Holloway picked up his second NHL assist on a goal from Derek Ryan, but only played 4:35 after another rough turnover in the NZ leading to a goal against.
In total thus far, Holloway has roughly averaged 7:05 per game in seven NHL games, with 2 points, a 38% goal differential, and a 33% expected goal differential.
At the current moment, what’s the most ideal role for Holloway? Should he be sent down to Bakersfield? If he plays in the NHL lineup, where should he be deployed?
*All microstats via Corey Sznajder, all other stats via EvolvingHockey and Natural Stat Trick unless stated otherwise

For me, this is the least preferable option. I just don’t think Holloway benefits from playing limited minutes with mediocre linemates, as it’s not a suitable role to see what he offers at the NHL level, and what he’s currently capable of.
Tasking him to center (a position he hasn’t played at the professional level) Ryan and Shore in limited TOI is simply not placing him in a comfortable position to succeed.

Option 2: Switch Holloway and Foegele on the third-line

Foegele – McLeod – Puljujarvi has been excellent in terms of possession and defensive play, currently holding a 62% expected goal share. With that line on the ice, 5v5 scoring chances are 30 – 15 in favour of the team, equating to a perfect 2-1 ratio. However, that line has struggled to generate offence.
Of course, I’m not expecting a third-line to be brilliant offensively, and their low on-ice shooting percentage undoubtedly plays a notable role. Furthermore, it’s a vast improvement over the previous third lines the team has deployed; it can’t be understated how beneficial it is to have a line outside of 97/29 that isn’t constantly caved in. I certainly see the argument against separating the trio, and perhaps being patient is a wise idea.
However, changing something up could be a fine option for a few reasons. For starters, I think this current line would always score less than expected.
Ryan McLeod does a ton of things well, but his major area for improvement is generating quality passes, as he ranked 11th out of 14 Oilers Fs last season in high-danger passes per hour. Playing him on a line with two poor finishers in Foegele and Puljujarvi is unlikely to ever result in a considerable amount of offence. In general, I think playing Foegele and Puljujarvi on the same line is redundant in regards to playing style. Consequently, swapping Foegele for Holloway could be a good option to improve the third line.
This season, Foegele’s underlying numbers are quite good thus far, but I would much rather have Holloway playing those top-nine minutes over Foegele. Holloway’s passing skills are superior to both McLeod and Puljujarvi, and he provides some overall offensive skill that the third line currently lacks.
The third line is a much better position for Holloway to potentially succeed in, as opposed to playing on the fourth line. He obtains more minutes, better linemates, and still remains fairly sheltered. Additionally, he’s a superior stylistic fit on a line alongside McLeod and Puljujarvi in comparison to Foegele.

Another alternative would be to play Holloway on the second line with Draisaitl.
Edmonton’s current L2 is Kane – Draisaitl – Yamamoto. In the past two seasons, that trio hasn’t been great at 5v5; they have a 42% expected goal differential, and scoring chances are 89 – 103 in favour of the opposition with that line on ice.
Their actual goal differential is fine, but it’s largely the result of a highly unsustainable on-ice SV% of 0.974; put differently, that trio will eventually regress defensively to a considerable extent. I’d certainly argue that line needs a change-up.
Yamamoto has struggled this season and just isn’t offering enough to that line. With a 47 xGF%, his on-ice results this season have been inconsistent, and he’s struggling to finish or produce. Unlike Puljujarvi, he’s also a below-average defensive player, and I don’t think he’s accomplished enough to earn a top-six spot.
Consequently, I think it would be a fine option to play Holloway on that line. As mentioned previously, Holloway began the season on L2 with Draisaitl and Hyman, but was instantly demoted after one error leading to a GA. Draisaitl and Holloway haven’t even played 90 seconds together this season.
I’d like to see what Holloway can do in an extended sample size with NHL skill and talent. Currently, I wouldn’t split up the line of Nuge – McDavid – Hyman due to their hot performance as of late, so Kane would have to play RW on L2.
I think Holloway could be a solid stylistic fit on this line. Both Kane and Yamamoto are inefficient transition players, while one of Holloway’s major strengths throughout his NCAA career (and during his short time in the AHL) was zone entries, meaning the second line could be much more dangerous off the rush with Holloway.
The only downside is the potential defensive ability of that line, and it would also result in Holloway playing more difficult competition, but it’s a viable option in my mind.

Option 4: Send Holloway to the AHL

I’m against this option, but there are numerous benefits to this, and it is superior to what Edmonton has currently been doing. Holloway should either play top-nine minutes in the NHL or top-line minutes in the AHL, and playing limited minutes on the fourth line as center is not a suitable role for him.
If Edmonton feels that Holloway doesn’t fit in the top nine, he could benefit from playing important minutes in Bakersfield. Holloway would likely play 20+ minutes on one of Bakersfield’s top two lines, alongside significantly more usage on special teams.
Spending some temporary time in the AHL won’t really hamper his development, and he can always be recalled; if Holloway had begun the season in the AHL and was recalled mid-season, his cap hit would be $1.44M, but since he was on Edmonton’s opening night roster, his cap-hit for the entire season will be $0.925M, even if he’s sent down and then later recalled. In the scenario that he does get assigned to Bakersfield, it’s nearly inevitable that he’ll be recalled at some point due to possible injuries as the season goes on. 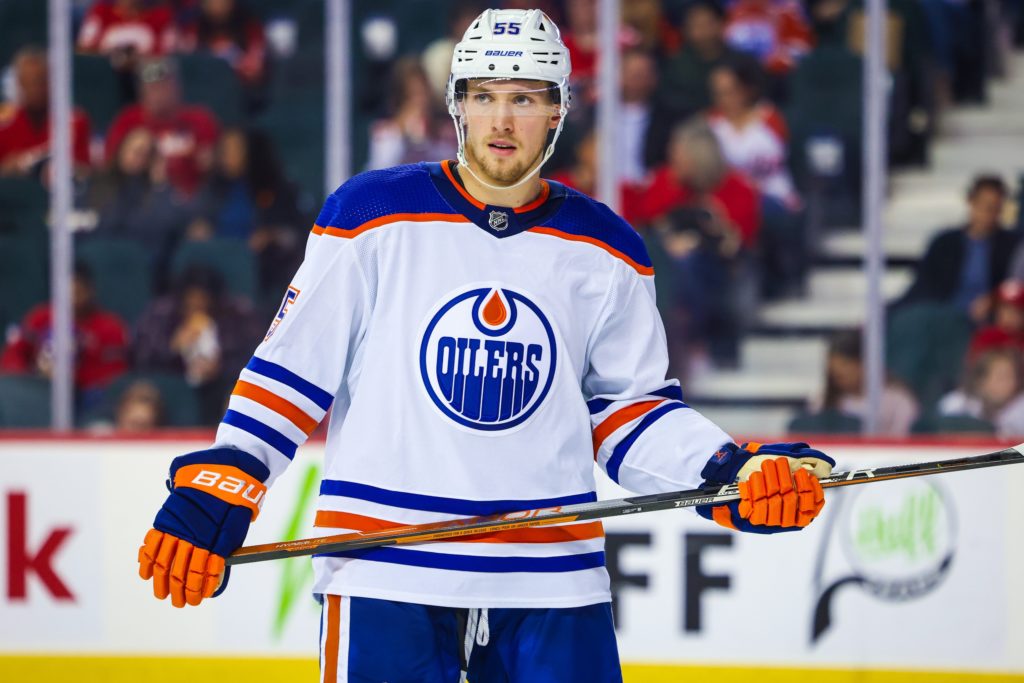 Sep 28, 2022; Calgary, Alberta, CAN; Edmonton Oilers left wing Dylan Holloway (55) skates against the Calgary Flames during the third period at Scotiabank Saddledome. Mandatory Credit: Sergei Belski-USA TODAY Sports
Again, Holloway should not continue playing on the fourth line. 99.9% of the time, it’s a poor decision to play a young rookie 8-9 sheltered minutes with mediocre teammates. As for the rest of the options, there are numerous advantages and disadvantages.
Currently, I would probably lean towards deploying him as 3LW with McLeod and Puljujarvi, but I’m also in favor of granting him an opportunity with Draisaitl. You could certainly argue that Holloway hasn’t done much to earn a spot in the top-six, but I think the second line needs to be changed up somehow; considering that the top line should stay intact for now, this can be accomplished by swapping Yamamoto with one of Holloway or Puljujarvi.
I can also see the advantages and benefits in regards to assigning him to Bakersfield, but I would rather see him obtain an extended and bigger opportunity in the NHL before doing so. I’m quite optimistic about Holloway, and I think he does possess the abilities to currently succeed with strong linemates in Edmonton’s top-nine. If he plays well, that’s great, but if he struggles, the team can simply send him down to Bakersfield, where he would play more minutes.
What would you do? Where and how do you think the Oilers should deploy Holloway?
Find me on Twitter (@NHL_Sid)
Editorials
Featured
Recent articles from NHL_Sid