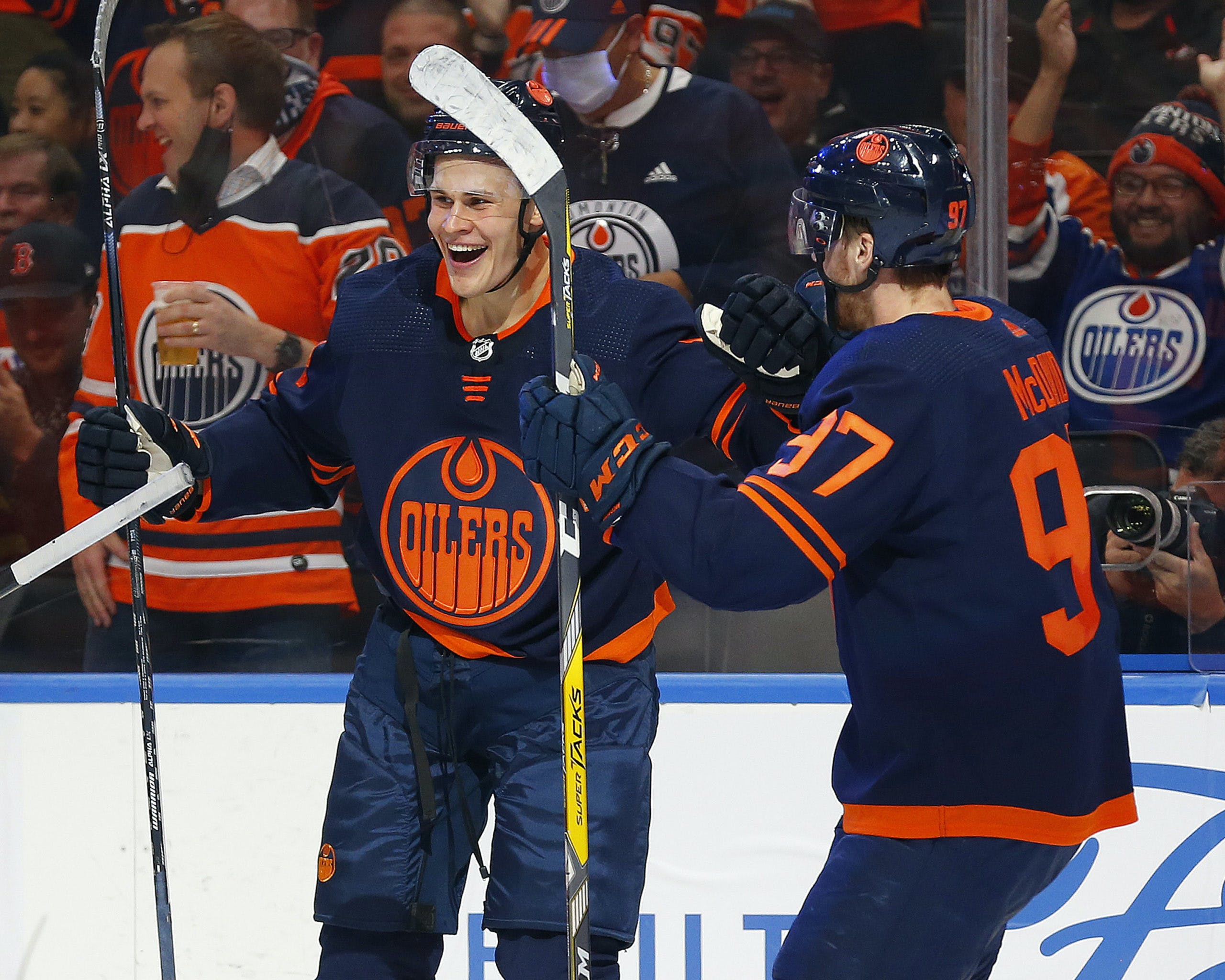 By Robin Brownlee
5 months ago
The ongoing saga of Jesse Puljujarvi and the Edmonton Oilers is nothing new, but it’s back in the news again this week after some remarks by Tom Gazzola on the Oil Stream podcast with Dustin Nielson, who is a bonafide big-time Puljujarvi fan.
“I would be very surprised if he ends up in an Oilers uniform next year,” said Gazzola, who is around the team enough to be in-the-know. “The topic of a fresh start is coming up again, and it’s not the Oilers just saying, ‘We’re done with Jesse Puljujarvi.’
“I think there’s kind of a mutual understanding there that both sides are OK with moving on. It’s not, ‘Hey, they need him to play with skilled players.’ It just feels like it’s time to move on and everybody agrees.”
Tyler Yaremchuk wrote about it here and Jason Gregor penned a terrific overview of the polarizing Puljujarvi situation here back on June 8. There was hope a fresh start would turn things around after Puljujarvi spent parts of two seasons away with Karpat – it looked like that was the case in 2020-21 – but what began as a promising second chance for both sides has again turned into a relationship of discontent. That happens. 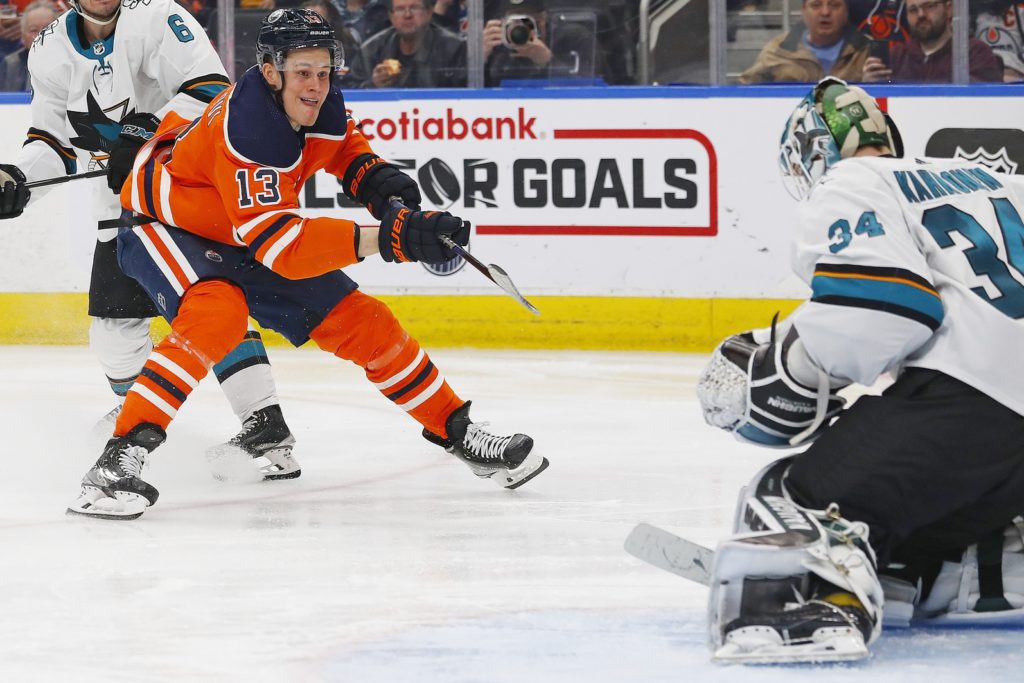 Mar 24, 2022; Edmonton, Alberta, CAN; San Jose Sharks goaltender Kaapo Kahkonen (34) makes a save on a shot by Edmonton Oilers forward Jesse Puljujarvi (13) during the third period at Rogers Place. Mandatory Credit: Perry Nelson-USA TODAY Sports
If a player and his agent can’t agree with a coach and/or general manager where that player fits in the scheme of things, it isn’t going to work. That’s what seems to be happening again with Jay Woodcroft as the latest to coach Puljujarvi in a carousel including Dave Tippett, Todd McLellan, and Ken Hitchcock. In the end, if it’s not a fit, it’s not a fit. I thought Ryan Rishaug of TSN offered up an on-the-money take on Nielson’s show today.
“This is my sense on where things have been at and remain at with Puljujarvi,” Rishaug said. “I think Jesse Puljujarvi and his camp have always viewed themselves a little bit different from where the Oilers view them – a little bit further along and expecting a little bit more. These were the early days, right? He was young, he was immature. They had issues with getting him to accept time in the AHL. I don’t think that went well with his teammates. There was some friction in the early days.
“We all saw how that bubbled to a breaking point. The team was at fault for some of that as well, right? So, the relationship wasn’t good early. They regroup, take a couple years off and they come back for their second crack at it. And this one went better. He held up his part of the bargain better. He has matured. The team had some different staff in place that was, you know, maybe willing to use him in a bit of a different way. They found some good stretches. They found some good games. He produced more than he had. There were some positive things that happened, right?
“But then there were also some long stretches where he wasn’t necessarily producing at the level that a top-six forward would. Then, in the playoff this year, he definitely wasn’t a top-six forward for them. So, then the end of the year comes and it’s time for everybody to regroup and have a meeting about where things are at. My sense is Puljujarvi’s camp wasn’t thrilled with the way he was used. My sense is, the Oilers are like, ‘Yeah, he’s probably lucky he didn’t get healthy scratched.” 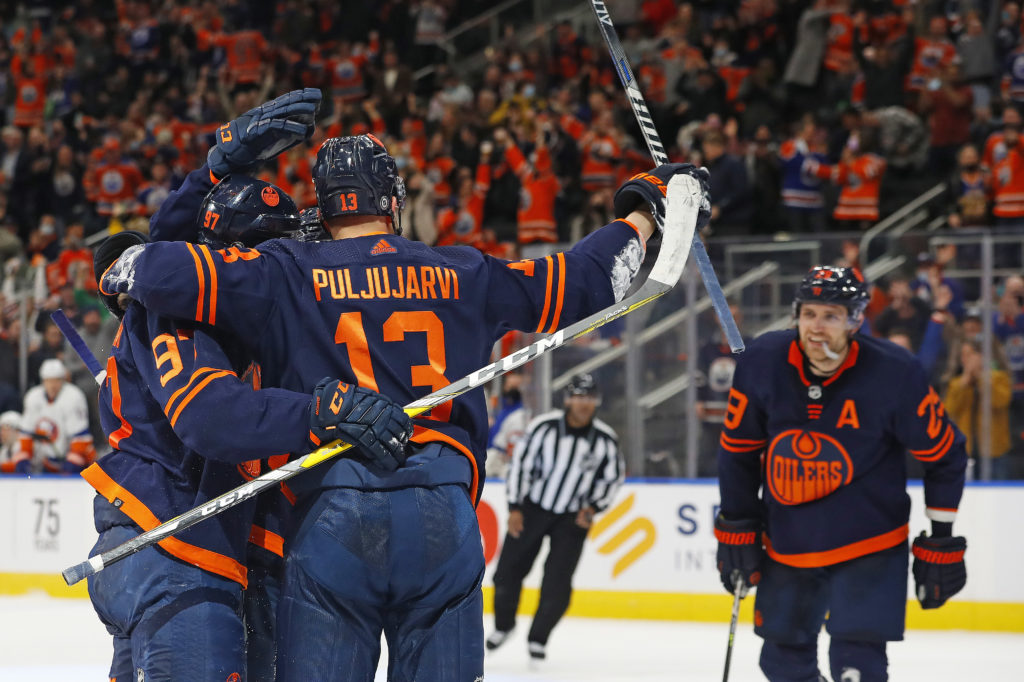 Feb 11, 2022; Edmonton, Alberta, CAN; The Edmonton Oilers celebrate a goal by forward Jesse Puljujarvi (13) against the New York Islanders during the third period at Rogers Place. Mandatory Credit: Perry Nelson-USA TODAY Sports
So, here we are. Puljujarvi is just one of several contracts GM Ken Holland has to deal with this off-season. Those so inclined can and do talk about Puljujarvi’s underlying numbers until they’re blue in the face. At the bottom line, he produced 14-22-36 in 65 games. Where does he fit? Does he fit? And how much should he be paid? I’m not sensing much agreement on those points. You?
“So, this player’s vision of where he’s at and what he should be expecting is probably significantly different from what the team’s is,” Rishaug said. “They’re looking at him going, ‘Listen, you’re a third line bottom-six winger. If that’s the responsibility you’re going to be happy to work with, and the money you’re going to be happy to be paid, then maybe there’s a fit.
“If a guy sees himself as a top-six guy and wants to be paid and played that way and he’s not going to be happy if he’s not, what do you do with that? On top of that, I just think the days of having (Connor) McDavid and (Leon) Draisaitl with Puljujarvi on the wing as the solution, I just think that’s come and gone.”