Is Jake Debrusk a good fit for the Oilers? By NHL_Sid
11 months ago
Last Monday, reporter Ryan Rishaug confirmed that Boston Bruins forward Jake Debrusk asked for a trade over the weekend. Numerous teams have reportedly reached out and inquired about him.
The 25-year old has been linked several times to the Oilers in the past. Jake is the son of former Oiler and current color commentator, Louie Debrusk. Last season, there were rumors of a potential deal for Debrusk involving then-Oilers defenceman Ethan Bear.
Once again, rumors are linking Debrusk to the Oilers. Nick Kypreos stated last Monday that Edmonton was among several teams that showed interest in him (other teams that reportedly asked about him included Calgary, St. Louis, and Carolina).
So, how good is Debrusk? Does he fit in Edmonton’s current roster?
*All stats via EvolvingHockey unless stated otherwise

Jake Debrusk’s production rates have been quite peculiar.
During the 18-19 season, he ranked 14th in the league in EV Goals/60, as he scored at a rate of 1.30 EV goals per hour. By comparison, Draisaitl was at 1.31 G/60 that year, while Ovechkin was at 1.32. There’s no doubt he was an excellent finisher that season.
The following season, his numbers gradually diminished, yet his production rates weren’t terrible. He scored at the rate of the average 2nd liner, which is still very respectable.
However, his production saw a huge decrease in the past two seasons. He had an EV Points/60 of 1.30. This rate of production is tied with current Oilers 4th liner Colton Sceviour.
It’s quite the odd trend, something you don’t typically see in a 25-year old player like him.

So, what’s the cause for this offensive decline?

In my personal opinion, I think a large reason for Debrusk’s numbers deteriorating is simply due to bad luck. Let me explain.

Debrusk’s lofty goal-scoring totals in 18-19 were never sustainable, considering he had a 17.3 SH% that year, but the opposite has occurred in his two most recent seasons – he’s posted merely a 6.3 SH%. In addition, his on-ice shooting% in the past two seasons is even lower, at 5.2%.
Some fun facts (note: PDO is a general proxy for puck luck, it’s the sum of a player’s on-ice SH% and SV%):
A lot of people don’t realize that good/bad luck is very common in hockey, especially in single-season sample sizes. Some players can sustain a high PDO over a large sample size, but this only applies to the league’s top playmakers or goal-scorers (e.g. McDavid, Draisaitl, Ovechkin, Kane, etc). For the vast majority of the league, an extremely high/low PDO or SH% seldom sustains.
This is most likely the case with Debrusk. His finishing abilities definitely didn’t rival players like Draisaitl and Ovechkin, as his goals/60 totals indicated in 18-19, but he isn’t a 4th liner at EV like his results suggest from 2020-22.
This is further backed up Debrusk’s individual scoring chances/60 haven’t declined. In 18-19 and 19-20, he averaged 7.7 and 8.0 scoring chances/60 respectively. In 20-21 and 21-22 (so far), he’s averaged 7.9 and 8.2 chances/60 respectively.
An interesting comparison to Debrusk is @Ryan Strome. After posting 50 points during the 2014-15 season, Strome’s production declined over the following years, but his prior production rates gradually returned to form with the Rangers. Especially in young players, if they posted excellent results once, there’s a pretty solid possibility it can occur again. The chances are probably even higher with a change of scenery. I think this can be true in Debrusk’s case.
I feel that his true ability is most likely reflected by his play in 19-20. He had a fairly sustainable shooting% that season and still finished at a rate that would place him as the average middle 6 winger.

How do Debrusk’s underlying numbers look?

*These numbers are all adjusted for multiple factors that can impact a player’s results, such as quality of competition, quality of teammates, zone starts, score and venue, etc
Debrusk ranks well from an analytical standpoint.
Ironically, his most productive season at 5v5 came in 18-19, yet he was an inferior offensive play-driver that year when compared to his three most recent seasons. It isn’t that odd, as strong finishing does not always translate to being a strong play-driver, but it is interesting. It suggests that even while Debrusk hasn’t been finishing more recently, he’s made improvements to his offensive game. He’s doing the right things. 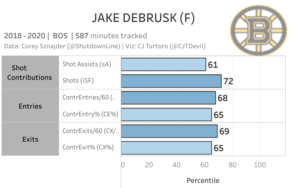 Debrusk is also a solid puck-mover, placing in the 60-70th percentiles in both zone exits and zone entries. His transitional abilities are probably one reason for his above-average chance generation results.
In addition, he was dominant on the power play from 2018-2020. He spent the vast majority of that timeframe on the top PP unit in Boston. However, his power-play numbers massively deteriorated the next two years, as did his ice time on the first unit. In Edmonton, though, it’s unlikely he would get much PP time.
Defensively, his underlying numbers of recent are a cause for concern, but they might just be the result of a dissatisfied player letting his attention to detail slip, rather than just a player whose skills suddenly diminished. Anecdotally, I’ve come across mixed opinions on Debrusk’s defensive game from Bruins fans in my personal experience. Some fans have commented on how Debrusk seldom backchecks, while others say he’s usually reliable in his own zone.

While his 20-22 results are not strong, Debrusk has generally posted above-average defensive results over the past four seasons. Statistically, one area he especially excels in is suppressing high-quality chances.
In terms of RA (rates against, or in other words, quantity against), Debrusk ranks 29th on the Bruins in the past four years (out of 43 players with a minimum of 500 even-strength minutes). However, he ranks 4th among all Boston skaters in QA (quality against).
Going back to his zone entry/exit results, one of the major reasons for these defensive results is likely because Debrusk is very efficient in exiting the zone. Not only is his rate of zone exits relatively high, he rarely turns over the puck when making a zone exit. From 2018-20, his failed zone exits/60 was 2.96. The league average failed exits/60 is 4.04. (These stats are via Corey Szjadner, @ShutdownLine on Twitter, who manually tracks individual advanced stats for every player. I’d highly recommend checking out his work).
Overall, there’s plenty more to love than to hate in Debrusk’s game. With him on-ice, Boston generates chances for at a higher rate, and allows chances against at a lower rate.

At this point in time, it isn’t clear what Boston would want in return. Debrusk’s drop-off in production, combined with a high qualifying offer on his next contract, probably means his trade value is at an all-time low.
In spite of his recent struggles, Debrusk has still produced at a higher rate than both Warren Foegele and Zack Kassian in the past four seasons, and Debrusk’s play-driving metrics are superior to Kassian’s.
Cap considerations aside, Edmonton wins a potential Debrusk for Kassian deal, which is what I’ve seen several fans suggest. Still, as attractive as Kassian’s speed and reputation as a physical player might be, it seems unlikely though the Bruins would make that deal. Insider Darren Dreger has also reported that there’s a “bidding war” for Debrusk, so Boston will most likely receive superior offers in comparison to just a one-for-one Debrusk for Kassian deal. Perhaps the Oilers could add a defenseman or a pick to make it worth their while?
Others have speculated about a Debrusk for Yamamoto trade. In my opinion, that’s a loss for Edmonton. Yamamoto is younger, has a more reasonable contract situation, and has more upside in my opinion. At the very least, it would be a fairly risky deal.

Almost everything that could have gone wrong for Debrusk in 20-21, went wrong. Even if a significant cause for his poor even-strength production was unfortunate puck luck, the decline in defensive results and special teams play isn’t an encouraging sign.
However, I wouldn’t ignore his play in 18-19 and 19-20. As I’ve shown above, there are indications Debrusk is a very capable 2nd/3rd line winger. Although a defenceman and goaltending are likely high on Ken Holland’s to-do list for the trade deadline, the Oilers could use some additional forward depth.

I’ve mentioned it countless times this season; Edmonton’s bottom-six goal share is at an all-time low, and there hasn’t been a significant increase in recent games.
With skills to play in the middle six, I feel Debrusk is a better player than most give him credit for. As an answer to the headline, he can be a good fit for this team, either by playing in the bottom-six or pushing another player down.
Still, Edmonton does have a left-wing, Dylan Holloway, in the pipeline. Debrusk could prove to be redundant if Holloway makes an impact sooner than we think, and there have definitely been instances in the past where a rookie has made an immediate impact (e.g. Bear and Yamamoto in 19-20).
In addition, Debrusk’s qualifying offer is $4.4M. Edmonton is already in a rough spot cap-wise this coming off-season, as Puljujarvi and Yamamoto need new contracts. Consequently, if Edmonton does trade for him, it might just be a rental, barring the slim chance they could get him to agree to a team-friendly extension.
So, is he a better player than most think? In my opinion, yes. Taking his contract, Edmonton’s cap situation and LW depth into account, is he a good fit? Arguable.
I think the Oilers should definitely look into Jake Debrusk; I fully believe there’s a talented player there. Whether they should pull the trigger on a deal depends entirely on the ask.
What are your thoughts? Should Edmonton go after Debrusk?
Find me on Twitter (@NHL_Sid)
Nation Takes
Oilers Talk
Recent articles from NHL_Sid