By Robin Brownlee
1 month ago
Coach Jay Woodcroft provided a blast from the not-too-distant past when asked about goaltender Jack Campbell, the new No. 1 guy in the blue paint for the Edmonton Oilers, after Friday’s 5-3 win over the Seattle Kraken to wrap up the pre-season.
On a night when Jesse Puljujarvi had his best game of pre-season on a line with Connor McDavid and Evander Kane, Campbell looked capable of carrying the load in the crease for the Oilers this season, stopping 28 of 31 shots. That included back-to-back saves on Oliver Bjorkstrand and Daniel Sprong early in the second period to keep the score 1-1, sparking chants of “Soooup” from the faithful at Rogers Place.
Campbell, 30, who inked a five-year deal worth $25 million with the Oilers in July, wraps up his pre-season with a 2-0-0 record, a 2.38 goals-against average and a .915 save percentage in 151:02 of game action through three appearances. Friday, it was Campbell’s sprawling, sell-out stick save on what looked like an easy tap in for Sprong that stood out.
What caught my ear was Woodcroft’s characterization of the way Campbell plays. It was something of an ode to Mike Smith, minus the roadie haircut, crazy eyes and hair-trigger temper, fans around here became familiar with the past three seasons until Smith finally broke down at the age of 40. Enter Campbell and Stuart Skinner. 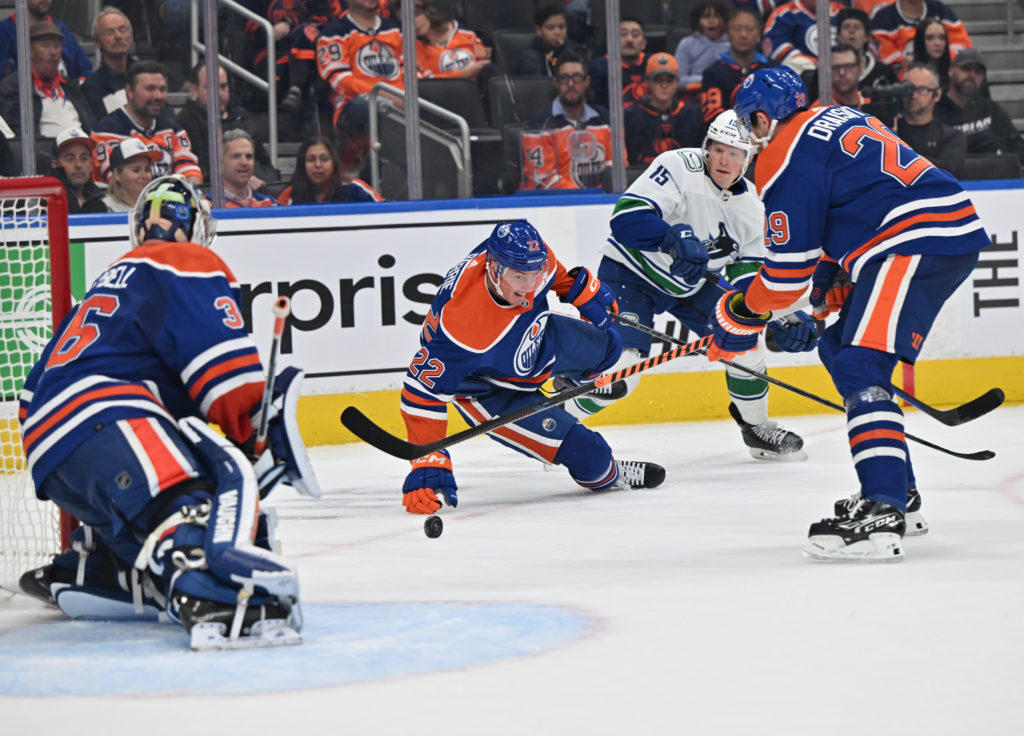 Oct 3, 2022; Edmonton, Alberta, CAN; Edmonton Oilers goalie Jack Campbell (36) looks for the puck as Vancouver Canucks forward Sheldon Driwes (15) looks on with Oilers centre Leon Draisaitl (29) during the second period at Rogers Place. Mandatory Credit: Walter Tychnowicz-USA TODAY Sports
“I like how hard he battles. He battles hard on every puck and never gives up on a save,” Woodcroft said. “He made some big save for us. I think (Seattle) had the bulk of the first period, we scored a goal late and then we kind of took the game over in the second period, but the chances they had were grade-As and Jack was there. I think he inspires confidence in his teammates and coaching staff.”
I lost track of how often coaches talked about battle level with Smith, but it was standard fare – even when the puck ended up in the net. Campbell doesn’t have the nasty in his game Smith did, and that’s just fine. Few stoppers do. What the Oilers want from Campbell are the kind of numbers Smith put up with a touch more consistency, fewer big swings in performance.
“Just some details in my game that I wanted to focus on and getting to know the guys in front of me. I thought we did a great job in the pre-season, now we get to have some fun in the regular season,” Campbell said of his to-do list.
“I think the team is playing really well heading into the regular season. It’s always tough knowing it’s right around the corner. I thought we focused and played well against a team that came out and played really hard. It’s nice to see the urgency there in the third and scored some big goals and got it done . . . I think we’re all just ready and chomping on the bit. I’m excited to get on the ice again tomorrow and get ready to rock and roll.”

Campbell’s 49 appearances last season with Toronto was a career high, by a lot. His next-highest total is 31 games, with Los Angeles in 2018-19. If Campbell can give the Oilers 50-55 games, then it’s a reasonable bet Skinner, who got into four pre-season games and had a 2.93 GAA and .911 save percentage, can take the rest.
If Campbell can’t take the starting job and run with it, the Oilers will be in for a different kind of battle altogether.
Editorials
Featured
Recent articles from Robin Brownlee