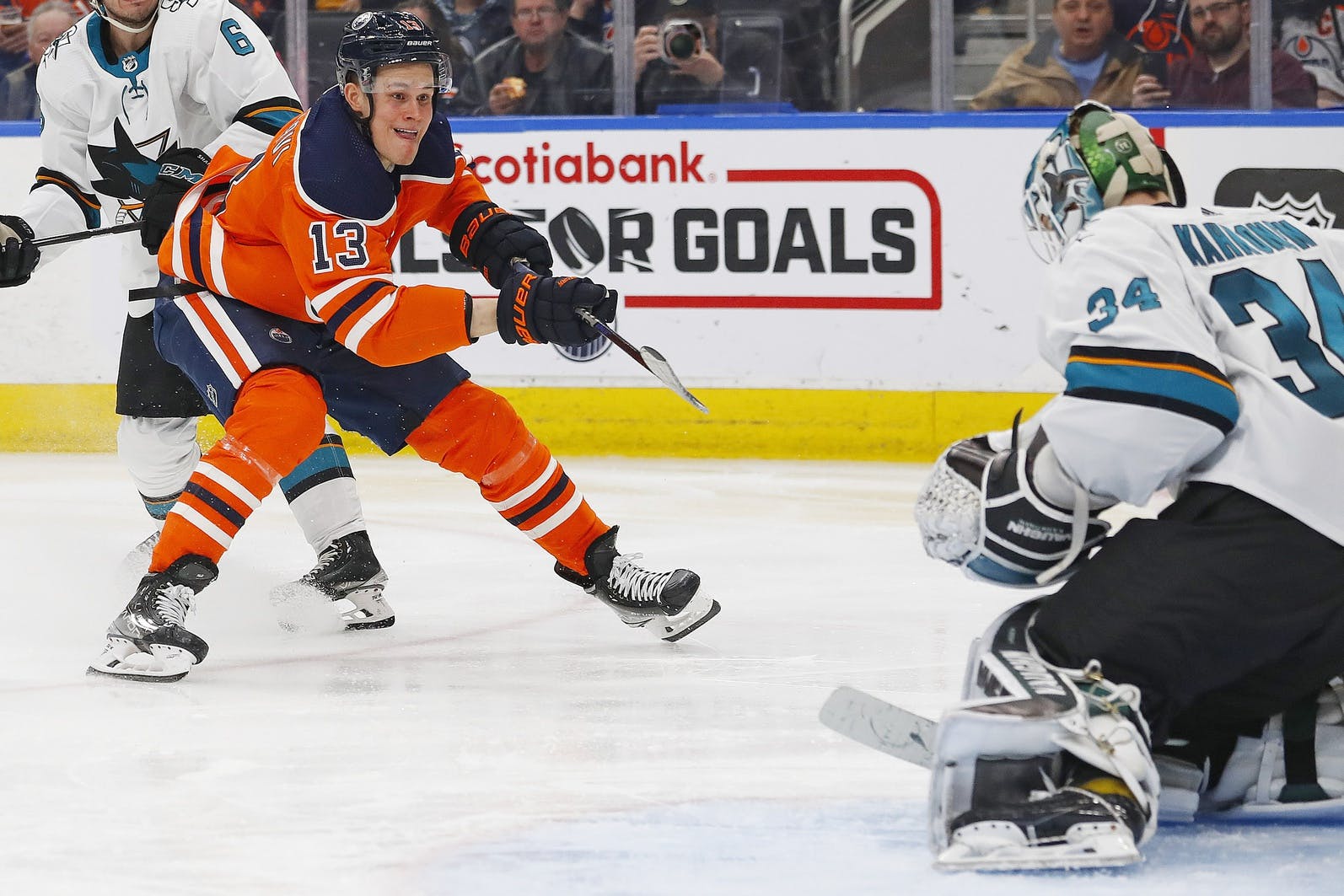 By Cam Lewis
7 months ago
After a nice stretch that saw them jump into second place in the Pacific Division, the Edmonton Oilers have hit a little bit of a snag the past few days.
The team has dropped back-to-back games against the Colorado Avalanche and Minnesota Wild, two of the top teams in the Western Conference, and they managed just one goal in each outing. For the sake of comparison, the L.A. Kings also lost to the Avs and Wild in the past week by scores of 9-3 and 6-3.
It’s far from the end of the world, but the content wheel must spin and somebody must take the blame, so the gun has been pointed at @Jesse Puljujarvi.
Following Edmonton’s loss to the Avs in which the team fired 50 shots at Darcy Kuemper, Sportsnet’s Mark Spector noted that the Oilers’ demise was the combination of Darcy Kuemper being otherworldly and, also, Jesse Puljujarvi being unable to bury two prime feeds from Connor McDavid.

“They did not lose because they lost their patience in a tight game and made a low-risk play that ended up in their net. More likely, Jesse Puljujarvi’s failure to bury two immaculate feeds from Connor McDavid was the culprit, critical miscues in a game like this one.
They lost because Kuemper was otherworldly in the Avs’ crease. Not because their own goalie was substandard, or let in that one smelly goal we have come to know in these parts, but not seen of late.”

Now, Spec isn’t wrong here. This is a situation in which Puljujarvi should score, and the Oilers would be better off if he found the back of the net more frequently, given the fact he’s playing alongside the best playmaker in the sport. That said, the comment is also ignorant to the reality that Puljujarvi pushes things in a positive direction for the Oilers, even if he’s been bit by the snake to the extent of only having three goals in his last 18 games.
After practice yesterday, Oilers head coach Jay Woodcroft praised the play of the young Finn, suggesting that it’s positive that he’s finding himself in these scoring situations and that he’s been a key part of Edmonton’s thriving offence over the past few weeks…

SPECTOR: “[Jesse Puljujarvi] is in positions to score a lot of goals, he’s getting a lot of chances, but none of them are going in. How do you coach your way out of that? Or do you stay out of it?”
WOODCROFT: “I think when it comes to offensive production, you worry when people aren’t getting chances, when they’re nowhere near an opportunity to finish. With Jesse, I think he does a lot of good complementary things for other people. I think, especially for young players, it’s important to not just measure their game in scoring statstics. When it’s not going in for you, you need things to hang your hat on. Sometimes that’s a finished check, sometimes that’s a play on the wall, sometimes that’s being good defensively. That said, you still want to instill confidence, some killer instinct around the scoring areas. I like that he’s finding himself in these positions, and if he keeps working at it, he’ll finish eventually.”
SPECTOR: “There’s pressure when you play on the first line with Connor McDavid, right? You can say what you want, but I’m sure that the guy wearing those skates is saying ‘I’m playing with Connor McDavid and they’re not going in.'”
WOODCROFT: “I’d say that most players on our team, and in the National Hockey League, nobody puts more pressure on them than themselves. I think when you look at our team, we’ve only scored one goal in each of the past two games, we can be better in that area. There’s things that we have to do in order to be better. That said, in the past few months here, we’ve been scoring at a pretty good rate as well, and Jesse, though his contributions, is a big part of the reason why our offence is where it’s at.”

In an interview with Daniel Nugent-Bowman of The Athletic, Ken Holland also praised the play of Puljujarvi, noting that he plays a positive role in retrieving the puck for his linemates, and that the puck will eventually start to go in if he keeps doing what he’s doing…

“He plays the same game pretty well every night,” Ken Holland said. “He’s big, he gets in on the forecheck and he retrieves pucks. Like all goal scorers, it comes and goes.
“He gets the puck in the hands of his linemates and then he’ll get to the blue paint. He’s obviously getting scoring chances. If you talk analytics, if you continue to get scoring chances, eventually the puck has got to go in.”

Puljujarvi has 13 goals and 34 points across 60 games this season, a dip from the 15 goals in 55 games he scored last season, but his underlying numbers indicate an improvement in his all-around game. The big Finn was slightly in the green in terms of on-ice goal differential last year at 42-to-38, while this year his goal differential has shot up to a wildly impressive 48-to-28.
Some might argue that an increase in playing time with McDavid is the reason for Puljujarvi’s goal differential boost, but a look at the numbers would suggest that Puljujarvi has been helping get the best out of McDavid. When the two of them are on the ice together, they’re outscoring their opponents 31-to-15. When McDavid isn’t with Puljujarvi, he’s at a 32-to-31 on-ice goal differential.
While Puljujarvi’s cold streak has been a tad frustrating at times, most can see the positive impact he brings to the Oilers. And the fact that Jay Woodcroft and Ken Holland are two of the ones who do is what’s most important.
Oilers Talk
Recent articles from Cam Lewis