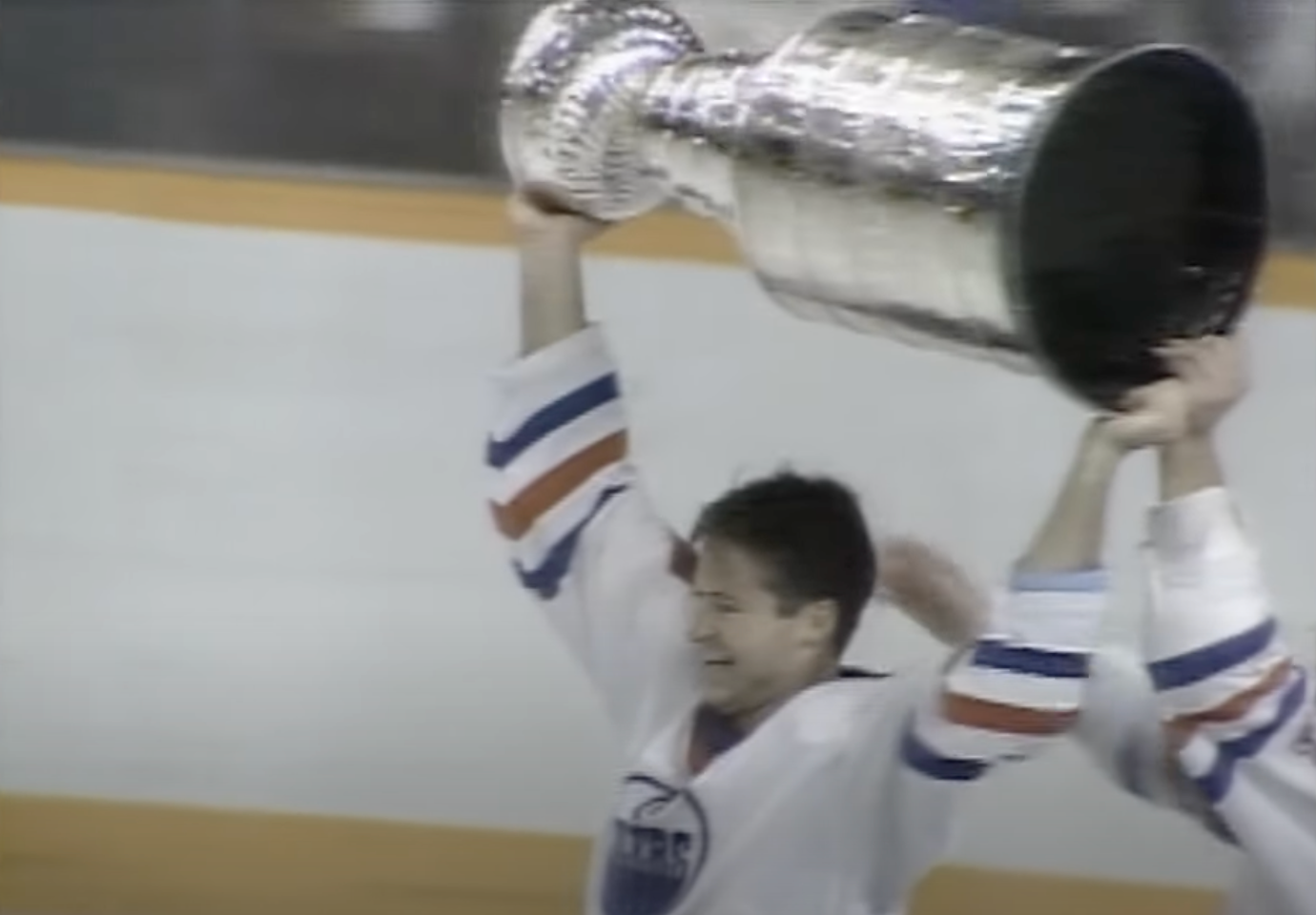 By Robin Brownlee
1 year ago
Anybody who has spent any time around Kevin Lowe understands the competitive fire that burns within him and what a passionate a man and fierce competitor he is. Likewise, how much wearing the No. 4 jersey that will be retired by the Edmonton Oilers at Rogers Place tonight has always meant to him.
Knowing all that, it’s not a bit surprising to hear Lowe say how happy he is this long overdue honor is coming at a time when the Oilers, the team he won five Stanley Cups with, are off to an 8-1-0 start as they face the New York Rangers, where he sipped from the Cup a sixth time. It’s always been team first for Lowe, who is more modest than need be about the select company he’ll be keeping in the rafters after tonight.
“The way the team is playing, it makes things a whole easier,” said Lowe, who will attend his HHOF ceremony Nov. 15. “The fans are excited to be in the building to watch the Oilers play, so I’m just happy to have a lot of friends and family there, a lot of people I’ve known over the years who’ve shown support for me to come out tonight. I’m just anxious to get through it.”
To understate, tonight has been a long time coming for Lowe, who retired as a member of the Oilers after playing just seven games in the 1997-98 season. That marked an end to a career that spanned 1,037 regular season games with the Oilers and 217 more with the Rangers over 19 seasons. To hear Lowe tell it, the distinguished career he put together was as much about timing as anything else.

Lowe, now 62, has always been more comfortable talking about the teammates who wore the other jerseys that have been retired — Wayne Gretzky, Jari Kurri, Grant Fuhr, Paul Coffey, Mark Messier, Glenn Anderson and Al Hamilton – than about himself. That is as much of a trademark as the competitive fire in his gut.
“You know, it was all about winning,” Lowe says. “So, what did I do to help the team win? Kill penalties. Shut some lines down once in a while. Play the last part of the game, ends of the periods. Make a big hit when needed. Even though I didn’t score much, I’d jump up in the play, just to try and change things up.”
The Boys on the Bus playing for Glen Sather were just kids when the Oilers joined the NHL for the 1979-80 season. “I was blessed to be cast in this situation,” Lowe said. “How many days into our first training camp was it when Gretz skated up and said, ‘Hey, how about you and I get an apartment together?’ And that stuff never ended. It just never ended.”
Gretzky, who did get that apartment with Lowe, summed up his roomie’s significance during the dynasty days of the 1980’s: “It’s not just a hall of fame for guys who get a lot of points. The hall of fame is about winning, and that’s what makes it special. That kids can say, ‘I’m no Bobby Orr. But maybe I can be that Kevin Lowe and compete and contribute.’”

Lowe wore more hats than anybody with this franchise. He was the first player the Oilers drafted going into their first NHL season. He scored the first goal, in Chicago. He went from winning those five Cups as player here to being an assistant coach under Ron Low. A year later, he took over from Low as head coach and later took the GM’s chair from Sather when he left for New York before adding the title of president of hockey operations.
I’ve never seen a player more passionate and competitive than Lowe. I think that’s what made him the player he was and the man he is. He had the pain threshold of a cadaver. Tape it up. Shoot it up. Put a cast on it. Lowe played through everything or tried to. He’d fight you for every inch of ice. He’d punch you in the mouth. He’d hack you. He was just as willing to take it as dish it out, if that’s what it took to get the job done. There are all kinds of stories from the Stanley Cup years about that.
Lowe was competitive to a fault. I remember Lowe breaking into tears when he retired as a player because he just couldn’t overcome an ear condition that had been impacting his balance for months. I remember when Lowe, then GM, threw on a track suit and came out for drills with the black aces at Chelsea Piers in New York. I don’t remember the players, but Lowe was hacking and throwing them around in a loose puck drill like it was OT of Game 7. For those poor buggers, it was like WTF?
In the lean years following the Oilers appearance in the 2006 Stanley Cup final against the Carolina Hurricanes, an era when fans were frustrated with the team and with Lowe as the GM, I wondered more than once how he’d get through it, given that nobody hates losing more than he does. Mercy, that was blow-a-gasket territory for somebody like Lowe.
Thankfully, Lowe made it out the other end. Here we are with his No. 4 jersey on the way up to where it belongs at a time when the team is 8-1-0 and Connor McDavid and Leon Draisaitl have some of the faithful reminiscing about the early days of building toward something truly special. Given the part Kevin Lowe played in that, the timing is perfect.