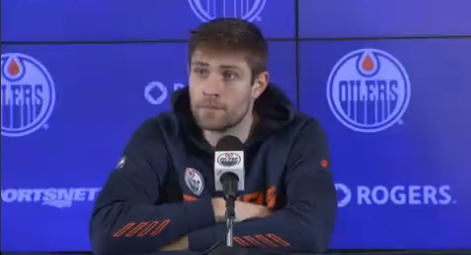 By Zach Laing
1 year ago
Leon Draisaitl is pissy.
At least, that’s what Postmedia scribe Jim Matheson said to the Edmonton Oilers superstar during a Tuesday afternoon media availability…
Here’s a link to Matheson’s questions in full.
The exchange was awkward and clearly uncomfortable for both parties. Matheson initially asked a fair question.
“What do you think is the number one reason for the losses? Is there one thing in your mind where you say ‘we have to get better at that?'”
Draisaitl’s response? “Everything.”
Matheson asked the player to elaborate, to which he declined by saying: “We have to get better at everything. You can do that. You seem to know everything.”
“Why are you so pissy?” said Matheson.
“I’m not, I’m just answering,” replied Draisaitl.
Matheson got another question in asking if there was some anger in the frustration Draisaitl expressed, but the initial exchange has taken social media by storm. The frustration from Draisaitl is palpable. The Oilers have been mired in a massive losing skid for over a month and the mood has been nothing short of somber.
Can you blame him? Draisaitl’s eight years in Edmonton have been nothing short of frustrating and the truth is, “everything” is wrong in Edmonton. The organization lacks depth throughout the roster and the problems that plague this team.
Despite that, it’s hard to not want a more in-depth answer from the player, too.
At the end of the day, you can clearly see the frustration from both sides in this awkward exchange.
Zach Laing is the Nation Network’s news director and senior columnist. He can be followed on Twitter at @zjlaing, or reached by email at zach@oilersnation.com.
Nation Takes
News
Oilers Talk
Recent articles from Zach Laing