By Robin Brownlee
1 year ago
There was a time when Tuesday’s exchange between Post Media sportswriter Jim Matheson and Leon Draisaitl of the Edmonton Oilers could have, and likely should have, taken place without any public airing of grievances. They would have taken a moment to have a conversation and sort things out instead of getting pissy for public consumption.
That conversation – talking to each other as opposed to sniping at each other via technology like Zoom – has slowly been squeezed out of the relationship between media people like Matheson and athletes like Draisaitl over the past decade or so. Matheson, with more than 40 years writing the hockey beat, has been around more than long enough to remember it. Draisaitl not so much.
The transition from one-on-ones and being able to sit down and chat with players before and after practices and games has given way to one-and-done scrums where everybody gets pretty much the same stuff. That separation has grown greater with Zoom in these days of COVID. I think that distance played into the back-and-forth we saw with Matheson and Draisaitl.
The days of players and writers sitting down to have a coffee and a chat wasn’t about becoming friends. It was about getting to know each other. Talking hockey. Finding out what makes somebody tick. Having a laugh. Matty was a master at all of it. Not every interaction had to be an interview. Some of the best stuff that might turn into a story down the line was off the record.
The interaction also provided players and coaches the opportunity to call a reporter over if they had a problem with something asked, written or said, as in WTF was that? I had many of those over the years – Teddy Green, Kevin Lowe, Doug Weight and Georges Laraque come to mind — none of it for public consumption. Not all of those conversations ended with agreement, but you’d talk it though and move on. 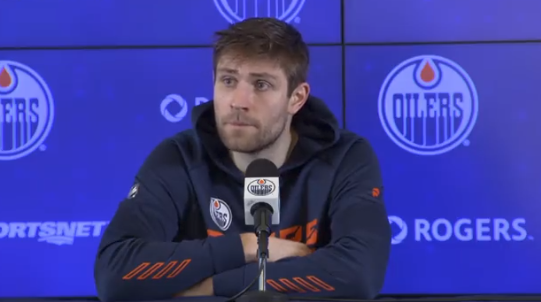 Diminish or take away familiarity and the opportunity to talk things out and you get what happened on Tuesday. Namely, a public spat that takes on a life of its own on social media, where most reasonable debate ends up buried under a mountain of memes, shit-talking and piling on by anonymous smart-asses — like the guy with the fake Jim Matheson Twitter account. That aspect is a whole other item.
The reality is reporters will ask questions players and coaches don’t particularly like. That happened Tuesday. Likewise, writers will get answers they don’t like, as we saw. That’s especially true when a team is in the tank as the Oilers are and have had so few games to play over the last month. Another day and the same damn questions. Another eye roll or a dismissive response for all to see. Sure. It’s a grind all around at times like this.
Talk to media people at the rink and they’ll tell you Draisaitl has a habit of making it obvious when he doesn’t like a question. That’s not difficult to pick up with the Zoom format. It’s happened a time or two with Matheson in particular. I got eye-rolled or worse many times over the years, but that was usually in the room, not on YouTube or social media for all to see. Big difference.
I think we’d get this kind of thing sorted out in a hurry if Leon could pull Matheson aside in the room or the rink and say, “Matty, I’m so sick of you asking me the same questions, so if you keep doing it, you’re not going to get much from me. Can you give me a break right now?”
On the flip side, if Matheson had the opportunity to approach Leon to chat and air any complaints over these last several years, maybe things don’t come off the rails as they did when things went kaboom Tuesday. “Leon, I know these questions day after day can be a pain in the ass when the team is struggling, but can you work with me here? You and Connor are the go-to guys. What you say matters.” Not an option. Things got pissy.

I like to think my years as a beat man covering the Oilers gives me a grasp of the dynamics at play here. I have nothing but respect for Matty and I know first-hand how he has built a HHoF career based on being fair-minded and honest. That said, for all of the changes in the way the game is covered, the heart of the matter remains the same – winning.
Players like Draisaitl are competitive as hell. Winning is what drives every player. Losing sucks and it seems like a lot of the questions suck too when things go sideways. It also sucks to cover a losing team. Mercy, I did plenty of that in the post-parade era. It’s amazing how much less reporters and their questions suck when the team is winning.
When the wins aren’t coming and the only real connection between reporters covering the team and players comes down to asking and answering questions, it can get dicey. That’s especially true after so many years of futility in the big picture and the ineptitude at play during this losing skid here and now. When there is nothing else to help you through, everyone is pissy.