By Cam Lewis
10 months ago
We’re into the final stretch of the season.
Let’s go through who did what at the NHL’s trade deadline and what it means for the playoff picture in the Western Conference.

Additions: Josh Manson, Nico Sturm, Artturi Lehkonen, Andrew Cogliano.
Verdict: When you’re the top team in the league, how do you improve at the trade deadline? If the Avs have a weakness that can make them come undone in the playoffs, it’s team defence. So the Joe Sakic went out and added a shutdown defender in Josh Manson and a pair of forwards who plays well defensively in Artturi Lehkonen and Andrew Cogliano. Colorado has a below-average penalty kill and all three of these players will help in that department. They might not have added a big name, such as Claude Giroux, but the Avs got better.

Additions: Tyler Toffoli, Calle Jarnkrok, Ryan Carpenter.
Verdict: Calgary paid a high price to make their big splash over a month ago and it’s been worthwhile for them, as Tyler Toffoli has eight goals and 15 points in 17 games as a Flame. They also added to their forward depth by acquiring Calle Jarnkrok and Ryan Carpenter, a pair of forwards who play well defensively. The Flames went into the trade deadline as the top team in the Pacific Division and that’s where they stand today.

Additions: Tyson Jost, Nicolas Deslauriers, Marc-Andre Fleury, Jacob Middleton.
Verdict: Perhaps the wildest move of deadline day came out Minnesota. The Wild acquired Marc-Andre Fleury, the best goalie on the market, and they only have to give up a first-round pick in return if they reach the Western Conference Final and Fleury picks up four wins in the playoffs. In another deal, Minnesota flipped the now-expendable Kaapo Kahkonen to the Sharks for a solid depth defender in Jacob Middleton. Overall, it was a good day for a team that’s struggled to keep the puck out of the net. If anybody can help Minnesota go on a playoff run for the first time since 2003, it’s Fleury.

Additions: Jeremy Lauzon, Alex Biega.
Verdict: Nashville’s big move came on Sunday, as they sent a second-round pick to Seattle in exchange for a quality young defender in Jeremy Lauzon. But the real story here is the deal that the Predators didn’t make, as Filip Forsberg will be able to carry the best season of his career into unrestricted free agency. Nobody can blame the Preds for not selling high on Forsberg as they’re tied for second in the Central Division, but losing him for nothing in the summer would really sting.

Additions: Nick Leddy, Luke Witkowski.
Verdict: With Marco Scandella struggling through an injury-riddled season, the Blues needed a veteran defender to round out their top-four on the blueline. They went out and acquired Nick Leddy from the Red Wings in exchange for Oskar Sundqvist, Jake Wallman, and a second-round draft pick. Leddy isn’t an exciting addition but he perfectly fills the biggest need that St. Louis had and the team didn’t have to give up a first-round pick.

Additions: Troy Stecher, Frederic Allard, Nelson Nogier.
Verdict: One of the biggest surprises in the Western Conference has been the early arrival of the Los Angeles Kings, who sit firmly in a playoff spot after three years on the outside looking in. Despite the success, general manager Rob Blake didn’t stray from the plan, as he pretty much stood pat rather than moving futures to go for it this season. L.A. added a depth defender in Troy Stecher and a pair of minor-league defencemen for good measure. That’s a pretty boring day for a team with the prospect capital to pull the trigger on a huge deal. If you cheer for a team chasing the Kings in the standings, this was the type of deadline you wanted to see. 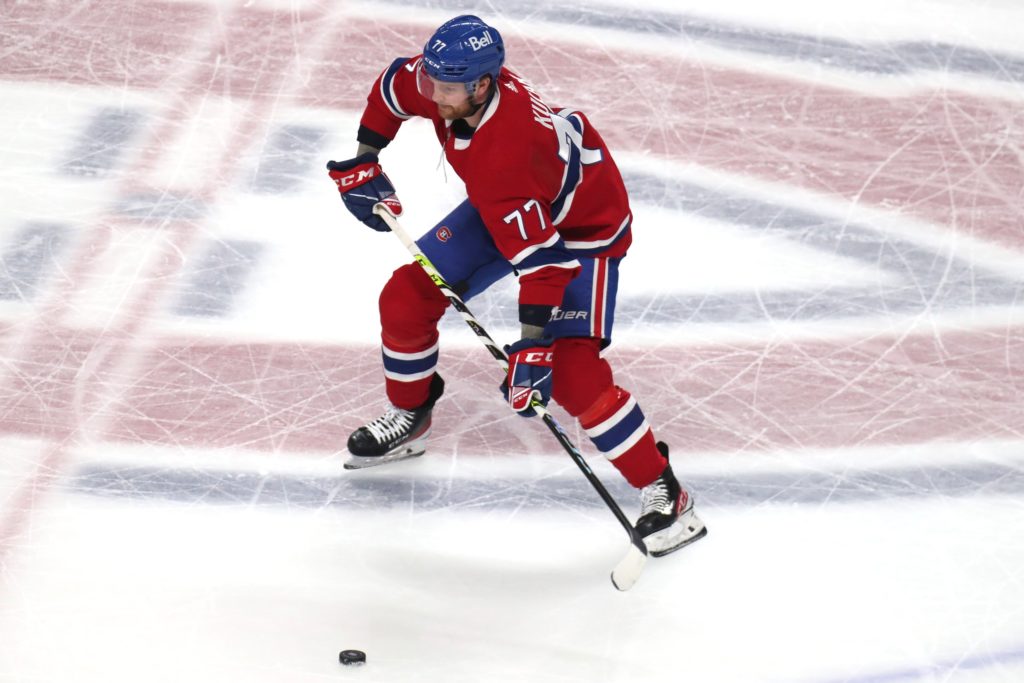 Additions: Brett Kulak, Derick Brassard.
Verdict: Ken Holland didn’t make a big splash, which was expected given his comments leading up to the trade deadline. He also didn’t upgrade the team’s goaltending, doubling down on the notion that he’s comfortable with the duo of Mike Smith and Mikko Koskinen in Edmonton’s net. The Oilers added defenceman Brett Kulak and pivot Derick Brassard, a pair of veterans who raise the floor of the team. It might not have been the exciting day that some were hoping for, but the Oilers are a little better now than they were a couple of days ago. But will it be enough to get them past the first round? We’ll see.

Additions: John Moore, Ryan Kesler’s contract.
Subtractions: Evgenii Dadonov.
Verdict: The only move the struggling Golden Knights made on deadline day was dumping the contract of Evgenii Dadonov, a quality depth forward who ultimately got squeezed out after the team acquired Jack Eichel back in November. With Dadonov and his $5 million cap hit out the door, it’ll be easier for Vegas to activate some of the handful of names the team has on the Long-Term Injured Reserve. Surely they’d love to pull a Tampa Bay and let Mark Stone wait until the playoffs when there’s no cap to return, but they actually have to make the playoffs first, and that’s no guarantee. Another thing to note is that Vegas’ goaltending has been a mess and they did nothing to address it.

Additions: Scott Wedgewood, Vladislav Namestnikov.
Verdict: The Stars are currently on the outside of the playoffs looking in but they have games in hand on the teams that they’re chasing. Braden Holtby is dealing with a lower-body injury and Anton Khudobin is out for the season so Dallas added some goaltending insurance in Scott Wedgewood. They also gave up a fourth-round pick in 2024 to acquire a solid middle-six forward in Vladislav Namestnikov. Nothing exciting but a reasonable deadline for a bubble team.

Additions: Mason Appleton, Zach Sanford.
Subtractions: Andrew Copp, Nathan Beaulieu, Nathan Smith, Bryan Little’s contract.
Verdict: One of the strangest deadlines was the one put together by the Jets. The Jets were sellers, as they moved their top soon-to-be free agent, Andrew Copp, to the Rangers for a package that could involve a first-round pick if New York wins two playoff rounds. The Jets were also buyers, as they traded a fifth-round pick for Zach Sanford and re-acquired Mason Appleton, who they let go in the Seattle Expansion Draft. Finally, there was an LTIR-related move, as the Jets sent a decent prospect to Arizona to dump Bryan Little’s contract. Giving up a prospect to save your owner cash money is never an exciting move. All told, the Jets are worse now than they were a couple of days ago, but they remain in the mix for a playoff spot.

Additions: Travis Dermott.
Subtractions: Travis Hamonic, Tyler Motte.
Verdict: Three consecutive losses heading into the deadline made the Canucks sellers, but the question was how far they would go in terms of firing off their players. Rookie general manager Patrik Allvin somehow convinced the Senators to give up a third-round pick for Travis Hamonic and then he flipped another third-round pick to Toronto for a quality young defender in Travis Dermott. While that’s a great sequence, the Canucks didn’t move J.T. Miller, which is pretty surprising given the prices that teams were willing to pay for players who aren’t as good as he is. This year’s deadline might have been the best opportunity the team had to cash in on Miller, who’s having a career year with one more year season left on his contract.
Oilers Talk
Recent articles from Cam Lewis