By Robin Brownlee
8 months ago
For a goaltender who just passed Curtis Joseph for career wins with the Edmonton Oilers with a 4-1 decision over the Tampa Bay Lightning last Saturday, and will pull even with Dwayne Roloson the next time he wins a game, @Mikko Koskinen sure hears a lot about what he can’t do.
Aside from being guilty of giving up a bad goal from time to time — as is the case with virtually every goaltender — it goes something like this: Koskinen is fine as a back up if you spot him in, but he tends to struggle if you expect him to be a starter for long stretches and aren’t acutely aware of his workload. If I’ve written a version of that twice, I’ve written it 20 times. I’m guessing you’ve heard it, and maybe even said it, a time or two as well.
For a guy who picked up his 77th career win against Tampa Bay to move past Joseph into seventh place and now sits one win back of Roloson, who is sixth for now at 78 — Koskinen has done it in 153 games compared to 177 for Cujo and 193 for Roloson — the lanky Finn sure has a lot of doubters out there.
And while that’s part of the gig, especially when goaltending has been singled out as a question mark while Koskinen, Mike Smith and @Stuart Skinner have tried to sort things out, that kind of ongoing criticism can start to wear thin if you’re one of the masked men in the blue paint. That became obvious today as Koskinen talked to reporters. 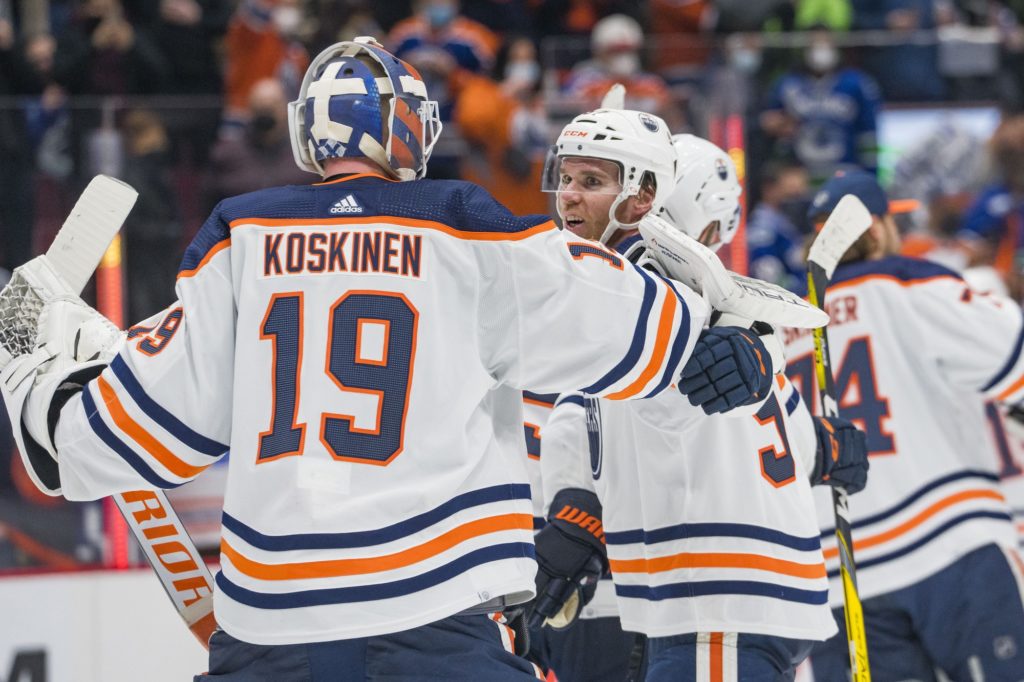 Jan 25, 2022; Vancouver, British Columbia, CAN; Edmonton Oilers goalie Mikko Koskinen (19) and forward Connor McDavid (97) celebrate their victory against the Vancouver Canucks at Rogers Arena. Oilers won 3-2 in Overtime. Mandatory Credit: Bob Frid-USA TODAY Sports
Koskinen is 9-1-2 with a .927 saves percentage in his last 12 games and he’s 21-9-3 with a 2.98 goals-against average and .906 overall. With the Oilers in the middle of the playoff mix in the Western Conference, Koskinen wants the crease down the stretch. The idea he can’t carry that load obviously irks him. This isn’t the first time he’s had a beef with the narrative out there.
“Yeah,” said Koskinen, asked if he feels ready and able to play three of every four games down the stretch and in the playoffs if necessary. The follow-up, from Rob Tychkowski of Post Media, was about the possibility of fatigue setting in if he’s asked to play too many games.
“I think that’s something where you guys made up in your heads,” he said. “I’m not going to buy that. I’m going to do my thing and go one day at a time. I’m not worried about that.”
“Mikko was playing well even before I arrived in Edmonton,” said coach Jay Woodcroft, whose 15 games running the bench since taking over from Dave Tippett has coincided with Koskinen’s hot streak. “He should feel very confident in his personal game now and I know the team is confident in him.”
The criticism that Koskinen tends to wear down when pushed into starts isn’t simply something reporters have made up in their heads. It’s a fact. That said, I’ve got absolutely no problem with seeing some pushback and edge from him. The Oilers need someone to take the crease. If not Koskinen, then who?