Monday Mailbag: Are you concerned about Kailer Yamamoto? By baggedmilk
23 days ago
Happy Monday, dearest Internet friends, and welcome to a brand new edition of the Mailbag to help you start your week and break down everything that’s happening with our beloved Edmonton Oilers. This week we’re looking at Connor McDavid snipe goals, Kailer Yamamoto’s struggles, Ryan Smyth memories, and a whole lot more. If you’ve got got a question you’d like to ask, email it to me at baggedmilk@oilersnation.com or hit me up on Twitter at @jsbmbaggedmilk and I’ll get to you as soon as we can. 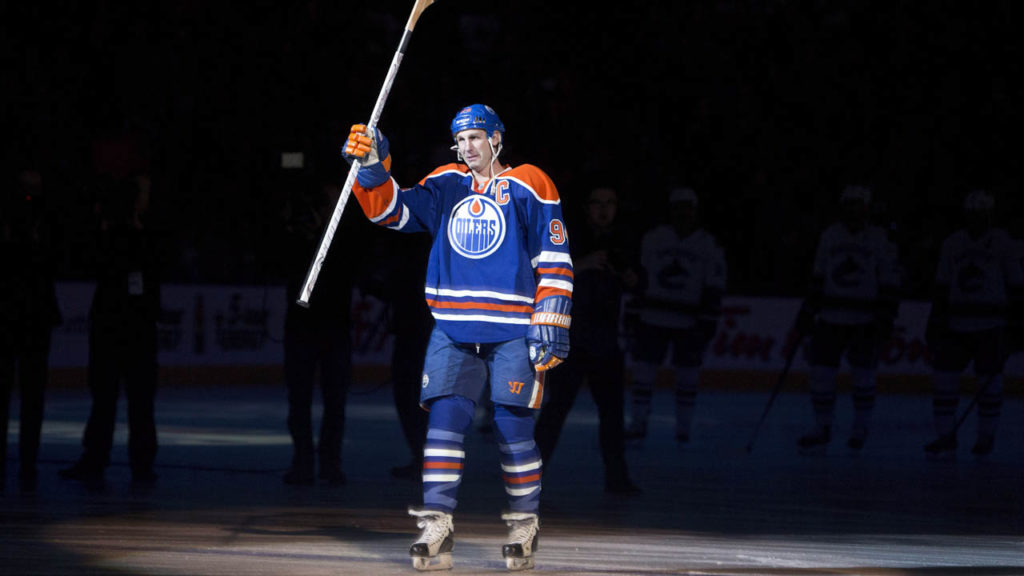 Edmonton Oilers’ Ryan Smyth (94) waves to the crowd before the game against the Vancouver Canucks during NHL hockey action in Edmonton, Alta., on Saturday April 12, 2014. THE CANADIAN PRESS/Jason Franson
1) PikaOil89 asks – What are everyone’s favourite Ryan Smytty or Lee Fogolin moments?
Jason Gregor:
My favourite Fogolin moment was speaking with Lee and hearing how much this honour meant to him. It was so genuine.
For Smyth, his goal v. Andy Moog in the playoffs. A rare down-the-wing slap shot for #94 to win the game in overtime.
Robin Brownlee:
Spent a lot of time over the years just sitting and shooting the breeze, talking hockey. Really enjoyable. As for moments. his farewell at the airport after being traded to the NYI was as raw and real as it gets.
Tyler Yaremchuk:
For Smytty, it would be when he stayed out forever in that final game to try and get that powerplay goal. I was really young in the ’06 run so while I know all about those moments, I didn’t quite fully grasp them in the moment. His return to Edmonton and that final shift will be two things I always remember though.
Cam Lewis:
So much about Ryan Smyth reminds me of my childhood watching and falling in love with hockey. Him parking himself in front of the net, the deflections that went top corner, speeding down the wing and firing those clappers. But for just one Smytty moment? When he lost his teeth and came back during the ’06 run. Incredible.
Baggedmilk:
I don’t know a whole lot about Lee Fogolin because he was before my time, but what I will say is that I absolutely loved watching him beam with pride during his Hall of Fame induction. That’s a guy that cares, and I loved every minute of it.
As for Ryan Smyth, the first thing that comes to mind was being in the building when he got his teeth knocked out by Chris Pronger’s clearing attempt. We all know the story. Smytty came back with a mouth full of stitches and picked up the winner on Shawn Horcoff’s game winner. That night is probably one of my all-time favourite Oilers moments in my life. 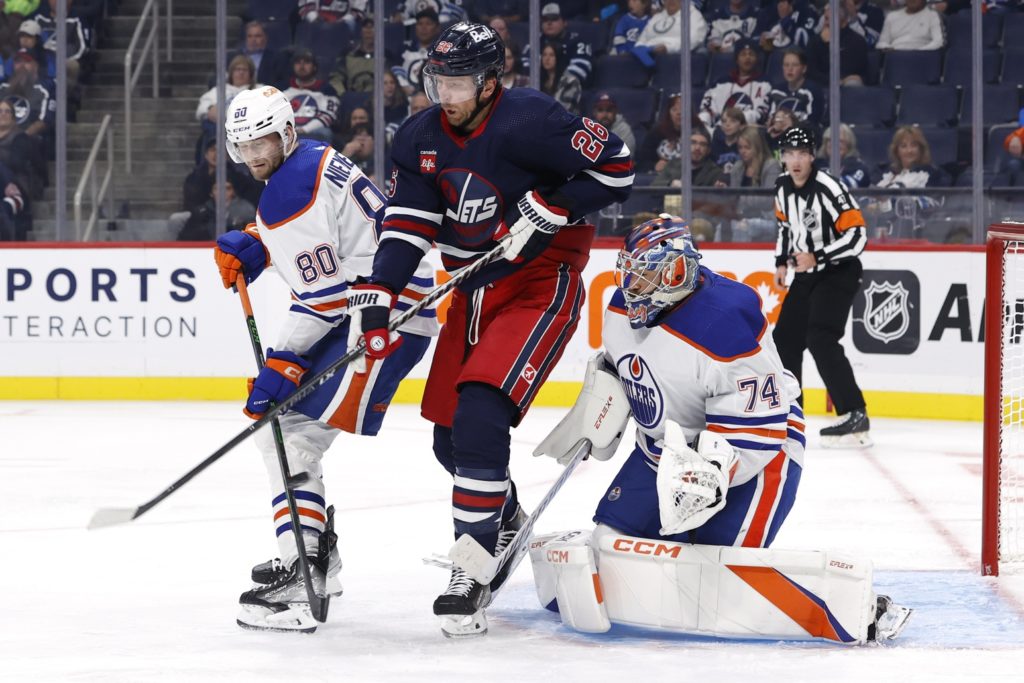 Oct 1, 2022; Winnipeg, Manitoba, CAN; Edmonton Oilers defenseman Markus Niemelainen (80) and goaltender Stuart Skinner (74) and Winnipeg Jets left wing Pierre-Luc Dubois (80) watch the puck in the second period at Canada Life Centre. Mandatory Credit: James Carey Lauder-USA TODAY Sports
2) @molinegreen asks – What did you think of Markus Niemelainen’s game? We sat row 2 against the Devils and I was shocked how big of a beast he is. He was definitely throwing the body around… games not perfect by any means but it’s nice having a big body who’s not afraid to use it.
Jason Gregor:
He is getting more comfortable with every game. He has worked on his puck skills and we see him making more plays. Yes, he made a split-second wrong decision on the NJ game-winning goal, and that should be a good learning experience. Overall I think he has been fine for a rookie.
Robin Brownlee:
Moves really well and loves to bang. Great foundation for the skills he’ll need to stick around. He just needs ice time and experience to polish the other aspects of his game.
Tyler Yaremchuk:
I think it’s time to sit him for a game. I’d be fine with he and Murray having a bit of a rotation on that third pairing. I still like what Nemo brings to the table more than Murray and the upside is intriguing, but I think you need to keep guys fresh too. Nemo has had a couple of rough games and I think giving him a breather with back-to-back’s coming up would be a good idea.
Cam Lewis:
He’s got fan favourite written all over him the way he just drills guys and makes life difficult in the defensive zone. Niemelainen just needs NHL experience to refine the part of his game that are missing, like quick decision-making and making tape-to-tape passes on plays that are evolving quickly.
Baggedmilk:
I like the way the kid throws his body around. The Oilers don’t have any other defender like him in the lineup, and for a rookie, I think he’s fitting in just fine. There are mistakes — we have to expect that — but he seems to be getting better and better by my eyes. 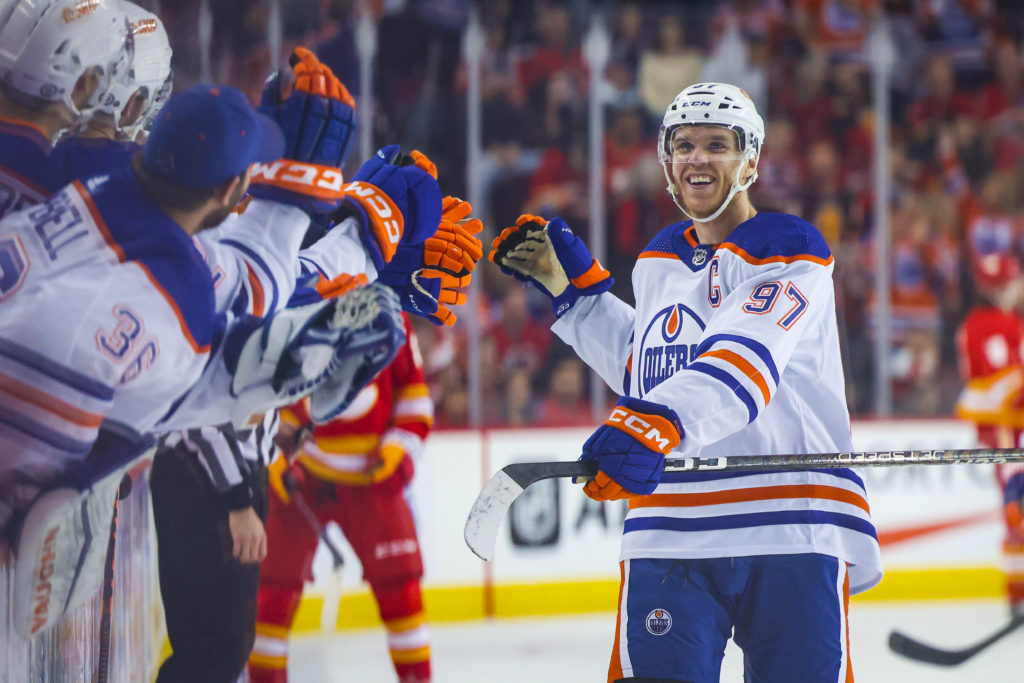 Oct 29, 2022; Calgary, Alberta, CAN; Edmonton Oilers center Connor McDavid (97) celebrates his goal with teammates against the Calgary Flames during the third period at Scotiabank Saddledome. Mandatory Credit: Sergei Belski-USA TODAY Sports
3) Mike E. asks – It’s been fun watching McDavid elevate his game and shooting more. So I would love to hear everyone’s thoughts on two things:
a) How many games for McDavid to get to 50 goals?
b) How many goals total do you predict McDavid has at the end of the season?
Jason Gregor:
I’ll say he scores his 50th in game #59 and he finishes the season with 61 goals. I’d love to see him push for 50 in 50, but it is extremely difficult to do.
Robin Brownlee:
65 games for 50. He’ll score 60.
Tyler Yaremchuk:
I’ll say 68 games to get to 50 and he finishes the year with 58.
Cam Lewis:
The season becomes more of a grind as it goes along so it isn’t fair to assume he’ll keep the goal-per-game pace. I figure his 50th goal will come between games 65 and 70 in mid-March. He’ll finish on a bit of a heater and score 61.
Baggedmilk:
I think he gets it by game 70. I know he’s on a heater right now but scoring 50 goals in the NHL is no joke. That said, I also look forward to watching him humiliate me for giving such a conservative guess. I say he finishes with 55. 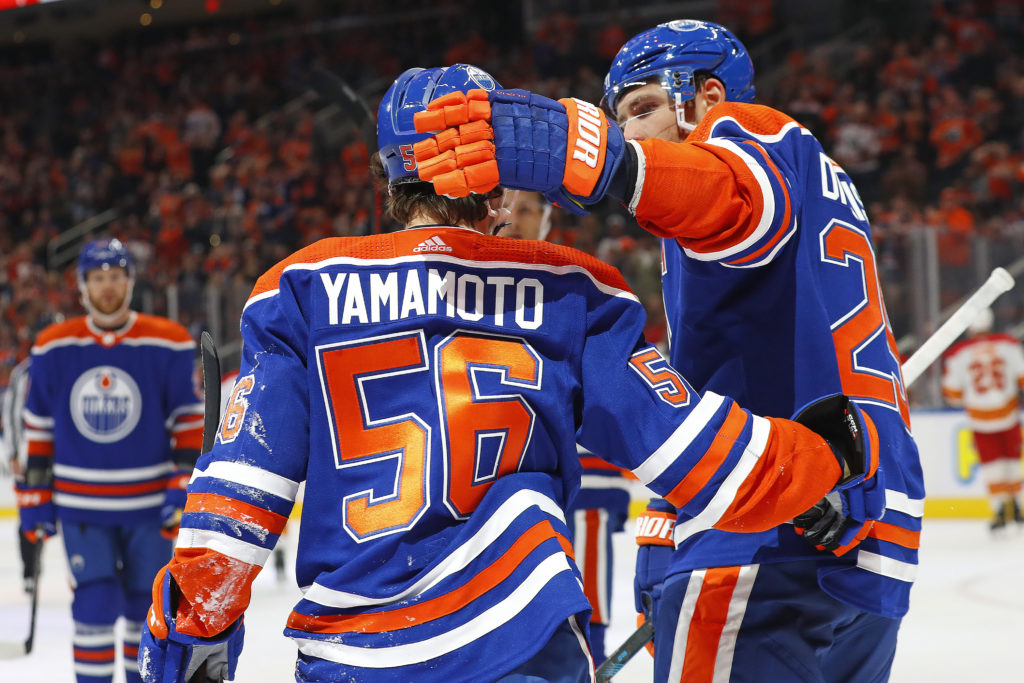 Sep 30, 2022; Edmonton, Alberta, CAN; The Edmonton Oilers celebrate a goal by forward Kailer Yamamoto (56) against the Calgary Flames at Rogers Place. Mandatory Credit: Perry Nelson-USA TODAY Sports
4) David O. asks – Is it time to start getting concerned about Kailer Yamamoto? Though his most common linemates are Kane, McDavid, and Draisaitl. He’s only generated 14 shots, with zero goals and three assists (only one of which was a primary assist) through 10 games (at the time of submission).
Jason Gregor:
Yamamoto has never been a high-volume shooter. In 2021 he averaged 4.94 shots/60 and last year he was at 5.01. This season he is at 4.7. Down a bit, but that was likely due to him playing with a banged-up hand. It was healed for the past few games, and he started making more plays, but he’s still not where he needs to be. He’s always been a streaky scorer. When he gets hot, he will bang home four or five in a 10-game stretch. He needs to limit the peaks and valleys. He and RNH each have three points at 5×5. Both are complementary top-six players after the big four. The problem right now for Jay Woodcroft is he doesn’t have any clear better option. Picking between Yamamoto and Puljujarvi’s play would be akin to a guy at a bald convention saying he has the best follicles. He might, but can you really see the difference?
Robin Brownlee:
Sounds like you think it is and I agree. Not enough production for the ice time and opportunity he’s getting.
Tyler Yaremchuk:
He’s a streaky scorer so I still believe he’ll go on a run at some point and finish the year with 20 goals but it isn’t a great sign when a player you committed $3 million to for each of the next two seasons goes goalless through 12 games. He needs to finish better. He’s not a rookie anymore and just working hard isn’t enough. He needs to work hard, create turnovers with his relentless forechecking and score goals to be worth his $3 million. Long season ahead though and I’m confident he’ll get going eventually.
Cam Lewis:
He started off slowly last year too and only had five goals through 30 games before a big two-goal game on New Year’s Eve. I wouldn’t say I’m worried. The goals will come, he’s a streaky player, but Yamamoto can’t be fed top-six minutes all year if he isn’t scoring.
Baggedmilk:
The snakebite is real for Yamo right now, and we’re at the point when he needs to have a goal bank in off his ass or something. He scores in bunches so once he gets this first one, I’d bet on more to follow in quick succession. 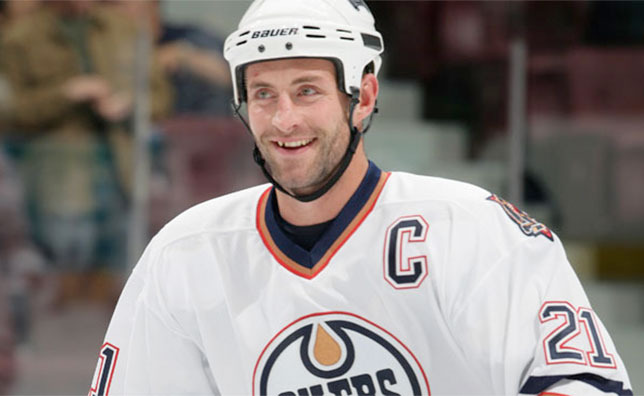 5) @toadvb asks – If you could bring back one 90’s era player that would be a perfect fit for the current team, who would that be?
Jason Gregor:
Jason Smith. Edmonton could use a rugged, tough, and physical D-man in their top six who is great on the PK and can play tough minutes. Most of the Oiler greats didn’t play very much, if any, in Edmonton in the 90s, so I didn’t include them.
Robin Brownlee:
Oiler player or any player? If it’s an Oilers player, I’ll take the 1990 version of Wayne Gretzky. If it’s any player, I’ll take Mario Lemieux.
Cam Lewis:
Either Roman Hamrlik or Boris Mironov. This version of the Oilers could really use Hammer’s puck-moving skills and Bobo’s physical play in the defensive zone.
Tyler Yaremchuk:
*heads to hockey DB* I’ll go off the board and say they need a young Dave Manson to patrol this blueline. That’d be great.
Baggedmilk:
I love Jason’s answer of bringing Gator back. I was going to say Doug Weight because who wouldn’t have him as an option in the top six, but Jason Smith would solve a greater need for this team right now. Then again, Brownlee goes with Gretzky and that’s really the only answer, isn’t it?