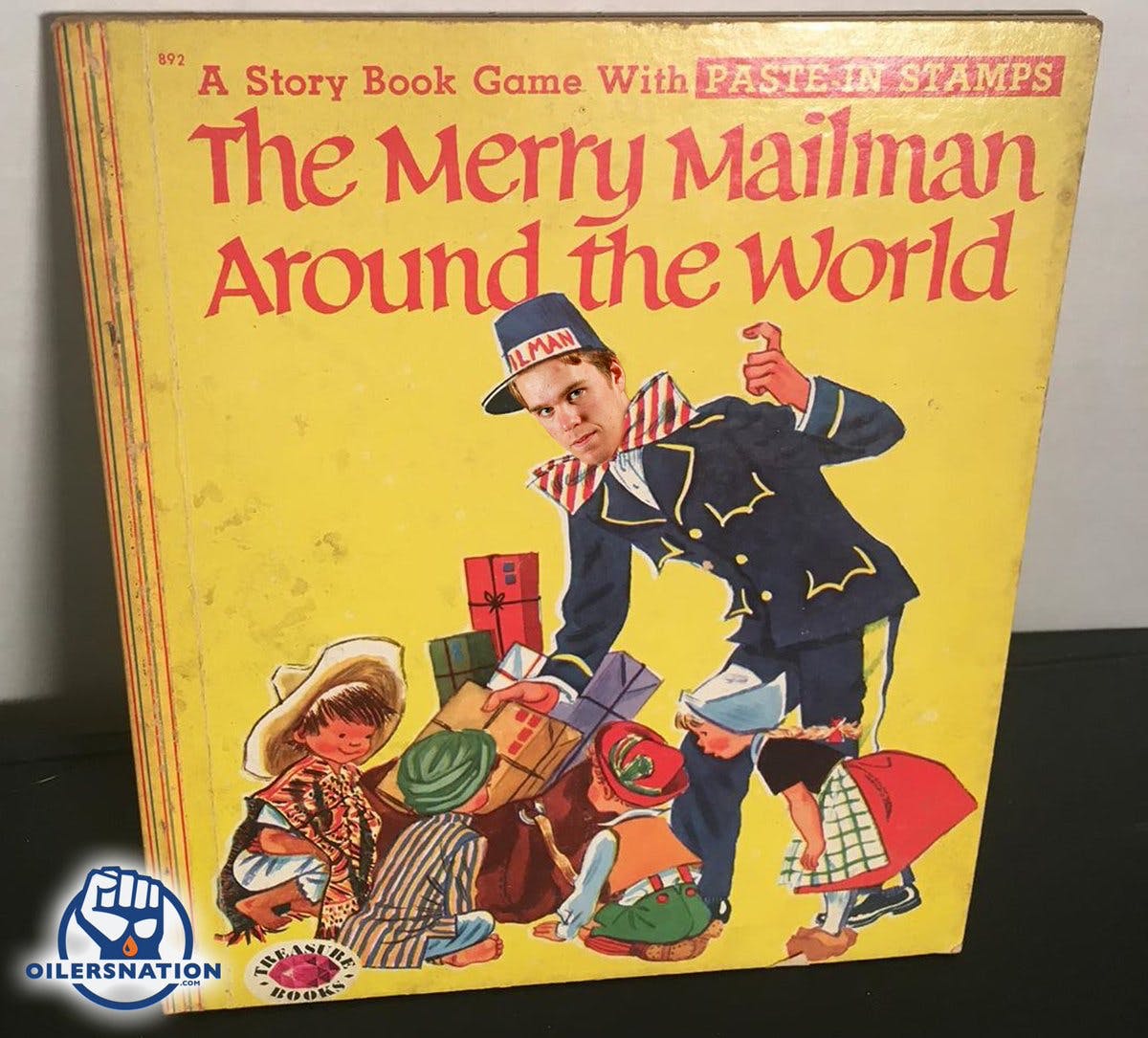 By baggedmilk
11 months ago
We’re counting down towards the Christmas break and we’ve got a brand new Mailbag is here to help you get your Monday started and also to make sense of everything that’s going on with our beloved Edmonton Oilers. This week, we’re talking about the World Juniors tourney, terrible Christmas gifts, COVID, and more. If you’ve got got a question you’d like to ask, email it to me at baggedmilk@oilersnation.com or hit me up on Twitter at @jsbmbaggedmilk and I’ll get to you as soon as we can. 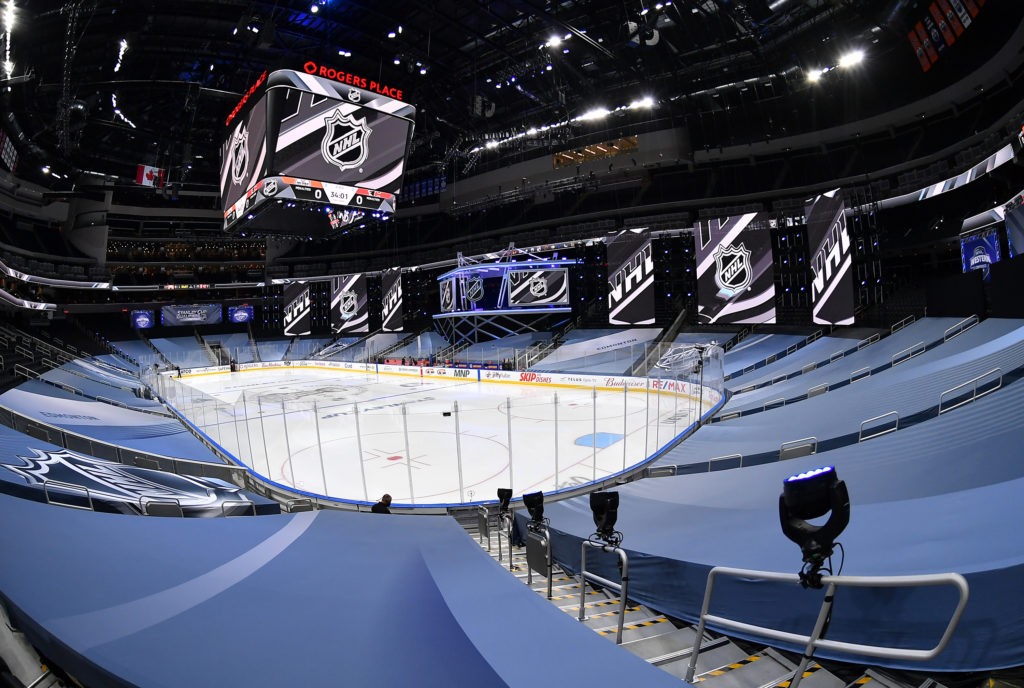 July 28, 2020; Edmonton, Alberta, CANADA; A general view of Rogers Place is seen before an exhibition game between the Edmonton Oilers and the Calgary Flames prior to the 2020 NHL Stanley Cup Playoffs on July 28, 2020 in Edmonton, Alberta. Mandatory Credit: Andy Devlin/NHLI via USA TODAY Sports
1) Dan asks – What’s your best guess as to how the rest of the NHL season plays out with COVID? Do you expect further delays or do you think the NHL will try to be more lenient as we see in the NFL?
Jason Gregor:
I could see them delaying another week and starting on January 1st. And I could see them altering testing for asymptomatic players.
Robin Brownlee:
The situation literally changes every couple of days because of how prolific the latest variant is. Fully expect this already prolific variant to come out of the Christmas break supercharged because too many people will not take proper precautions. Answering this before the Oilers were to get tested Sunday. Hoping they come through without more spread. How the season plays out isn’t top of mind for me at this point.
Tyler Yaremchuk:
The problem is the border honestly. I’m sure the league would like to do just do what the NFL did, but the Canadian government likely wouldn’t allow it and if they change the rules for testing for just the Canadian teams, then that would create some competitive imbalance. I think they have to just keep going the way they are and hope that Omicron slows down. Not the best plan in the world!
Baggedmilk:
I’m expecting more delays, more postponements, and more general annoyance that comes with COVID and all of us having to adapt to whatever comes next. I honestly don’t know what’s going on and I’ve stopped trying to guess at this point. 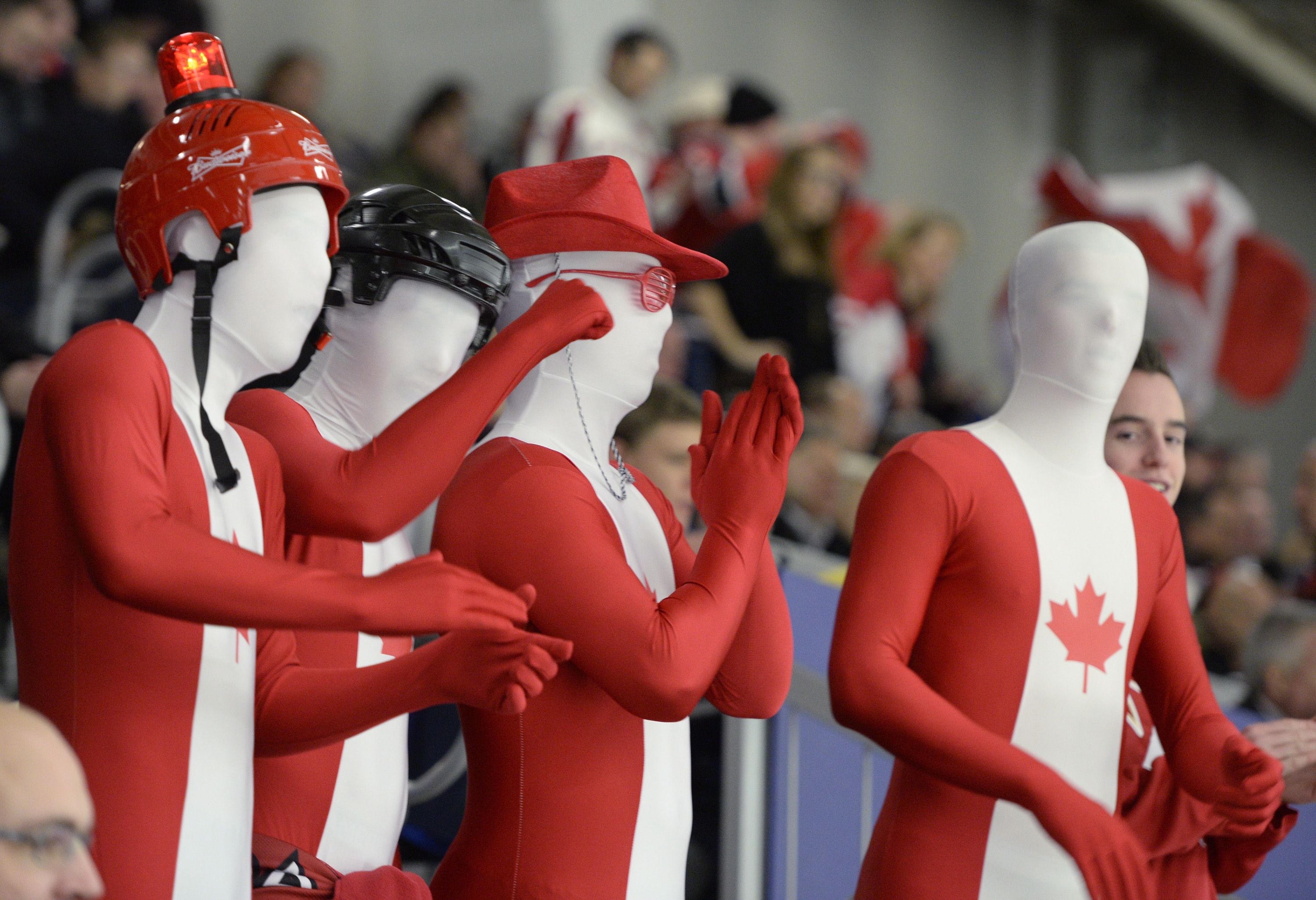 2) Baker asks – The World Juniors tournament kicks off on Boxing Day and I’d like to know what is everyone’s favourite WJC moment?
Jason Gregor:
Canada at home with a very good team is my favourite, but USA and Russia are also good. Finland can never be counted out in this tourney. They always play well, but I will pick Canada to win.
Robin Brownlee:
Canada beating the Soviet Union 3-2 to clinch the Gold Medal at the 1991 WJC in Saskatoon. The Soviets blitzed Canada in the third period — shots were 17-3 — but Trevor Kidd was ridiculous in goal and John Slaney got the winner. Was a lot of fun to cover that WJC despite brutal temperatures for an entire week.
Tyler Yaremchuk:
Eberle’s goal is at the top. I still get chills every time. I was also at Rexall when Canada beat USA on NYE in 2012. That was electric!
Baggedmilk:
My favourite moment is more so a series of memories because all of us used to get together and watch the games together when I was younger. But if I had to pick a specific WJC moment, it would have to be Eberle’s tying goal against Russia.
3) Heather – The best part about Christmas wrapping up is the music going away for another year. What is the worst Christmas song of all time and why is it All I Want For Christmas Is You?
Jason Gregor:
I enjoy Christmas music. We don’t overplay it and Silent Night is a great song. If I had to pick a worst song, it would be Dominick the Donkey.
Robin Brownlee:
Happy Holidays by Andy Williams. Every time I hear “Whoop-de-doo and dickery dock, and don’t forget to hang up your sock,” I think of Andrew Dice Clay. Close second is Santa Baby. Pushy gold digger with an irritating voice. “Hurry down the chimney tonight.” Sure.
Tyler Yaremchuk:
Honestly, I don’t love Christmas music, but I tolerate it. I don’t have a favourite or a least favourite. They’re all just whatever to me.
Baggedmilk:
I can do without Chestnuts Roasting On An Open Fire tbh. Other than that, I actually like Christmas music. 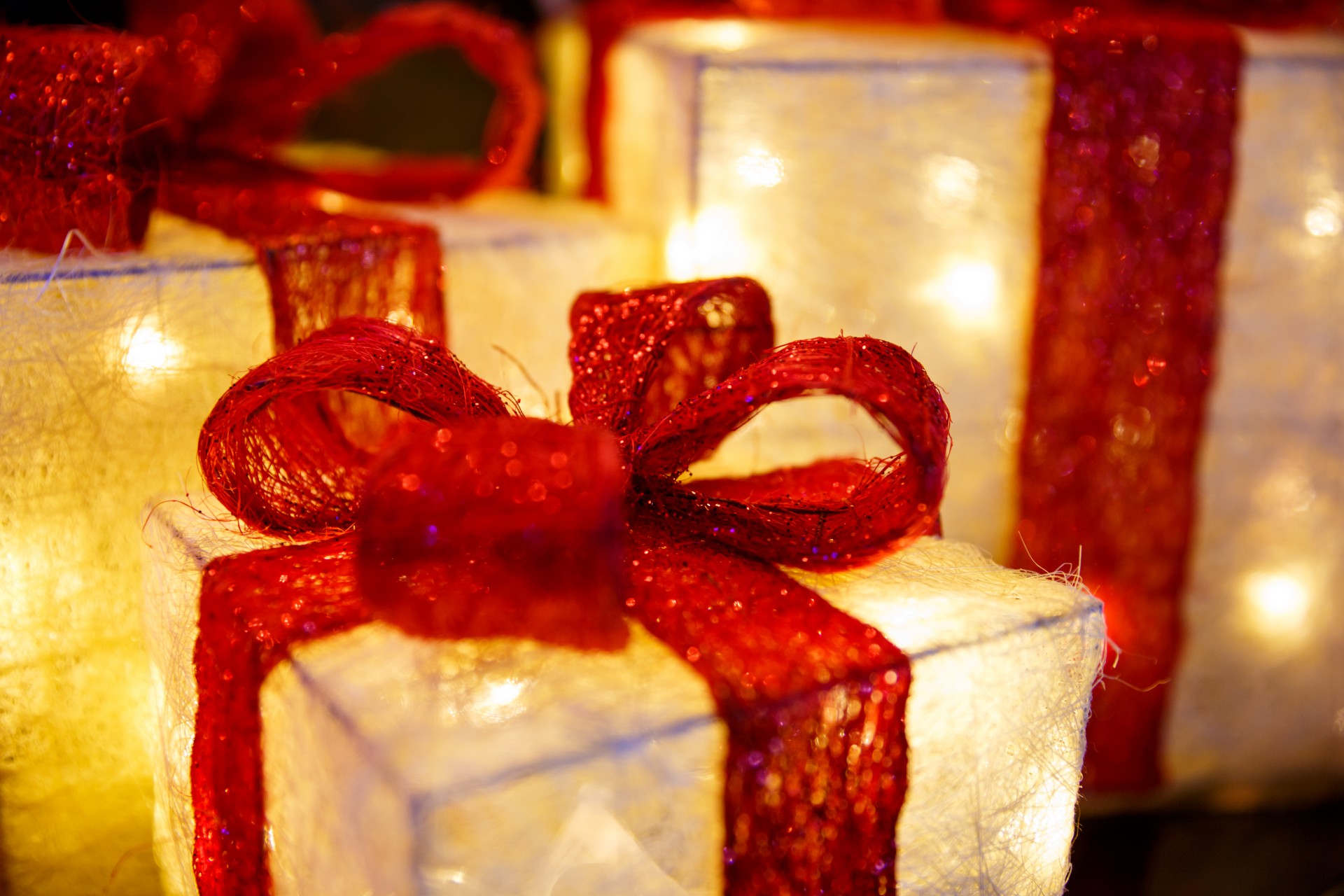 4) Aaron asks – Another Christmas is now behind us and my question for the panel is what is the worst gift they’ve ever given? Something that you thought the other person would like but it really fell flat upon delivery.
Jason Gregor:
In my 20s and 30s, my nephews were young and I loved buying them great, loud gifts. One year I bought my sister’s three boys this massive fire engine. They loved it, but my sister and brother-in-law hated it…for years… It was so loud…
Robin Brownlee:
After we finally got Sam home from the hospital in November 2006 after three months in NICU, we had Christmas cards made up of him in a Santa suit and sent them to friends and family like the proud parents we were. Must have sent 50 of those cards. We look back and laugh. Sam looked like a Cabbage Patch Kid. If we want to embarrass him when he gets married years from now, we’ll show that photo.
Tyler Yaremchuk:
Oh wow, that is a hell of a question and I’m not sure if I have an answer. If I cant think of a good gift for someone I usually just play it safe with either booze or scratch tickets. Isn’t that always the play?
Baggedmilk:
I once gave my dad some Matlock DVDs when he didn’t own a DVD player. I thought he did but he didn’t and I’ll never forget the laughter from my family as they realized he had no way to watch his gift. 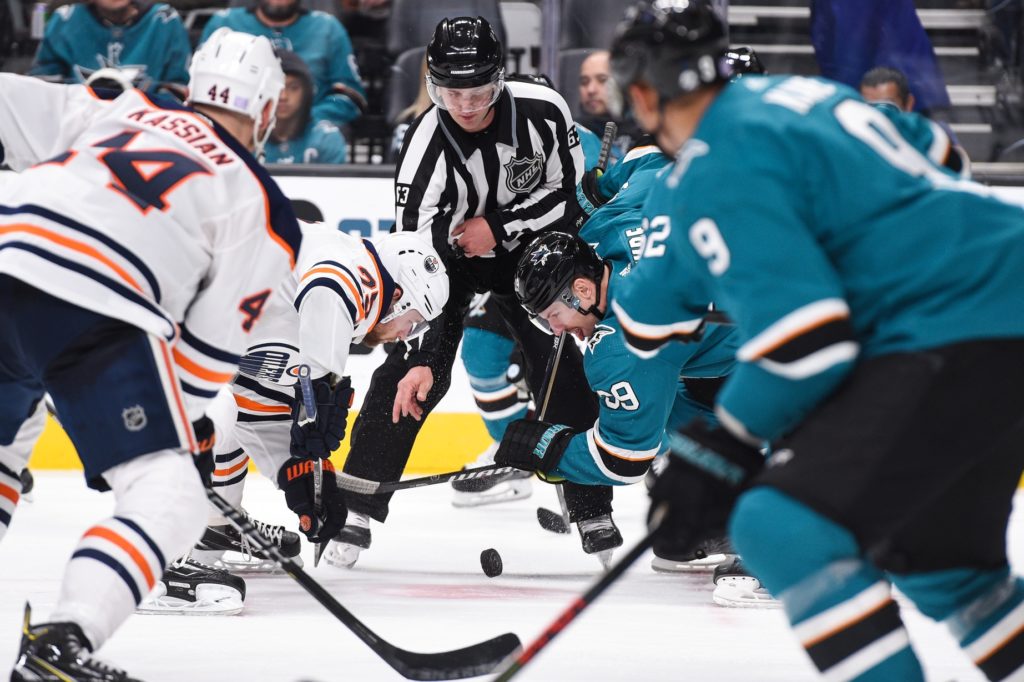 Nov 19, 2019; San Jose, CA, USA; San Jose Sharks center Logan Couture (39) breaks his stick during a face-off against Edmonton Oilers defenseman Darnell Nurse (25) during the third period at SAP Center in San Jose. Mandatory Credit: Cody Glenn-USA TODAY Sports
5) David O. asks – Every time I see an NHL centre thrown out of the faceoff circle, I see them react with fury or eye-rolling or gesticulating, far out of proportion to the impact on the game it actually has. So, my question is: in your work or personal life, what’s that one thing that just puts you on instant tilt despite the fact that it’s really not that important?
Jason Gregor:
Easy…when talking on phone and they ask you your name or what department you want. Then when you say it, they don’t understand and ask you to repeat it. Within seconds I’m yelling at an automated computer. Nothing can set me off quicker, even though it is so meaningless.
Robin Brownlee:
People who feel the need to write or say — but especially write — “ummmm” before they challenge or question something you’ve said or written. Just get on with it, Poindexter.
Tyler Yaremchuk:
WHEN PEOPLE LEAVE EMPTY CUPS OR GARBAGE IN THE PODCAST STUDIO YOU ALL KNOW WHO YOU ARE!!!!!!!!!!!!!
Baggedmilk:
Honestly, when Tyler tells me to pick up my coffee cups from the podcast studio because he should probably just do it for me. Respect the org chart, Tyler.