Monday Mailbag – How much should we value early season results? 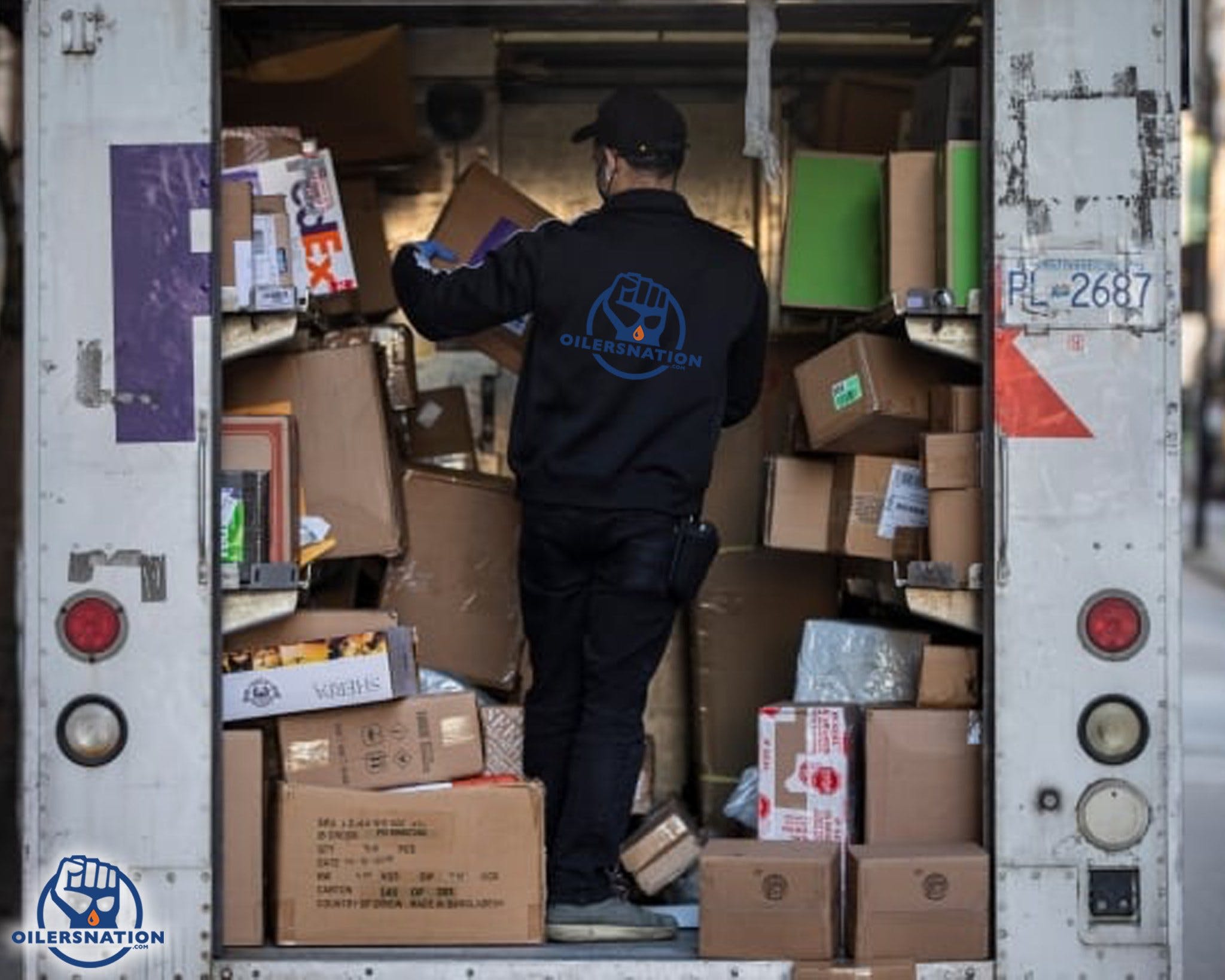 By baggedmilk
29 days ago
Happy Monday, dearest Internet friends, and welcome to a brand new edition of the Mailbag to help you start your week and break down everything that’s happening with our beloved Edmonton Oilers. This week we’re looking at early season results, empty seats at Rogers Place, missing Duncan Keith, and a whole lot more. If you’ve got got a question you’d like to ask, email it to me at baggedmilk@oilersnation.com or hit me up on Twitter at @jsbmbaggedmilk and I’ll get to you as soon as we can. 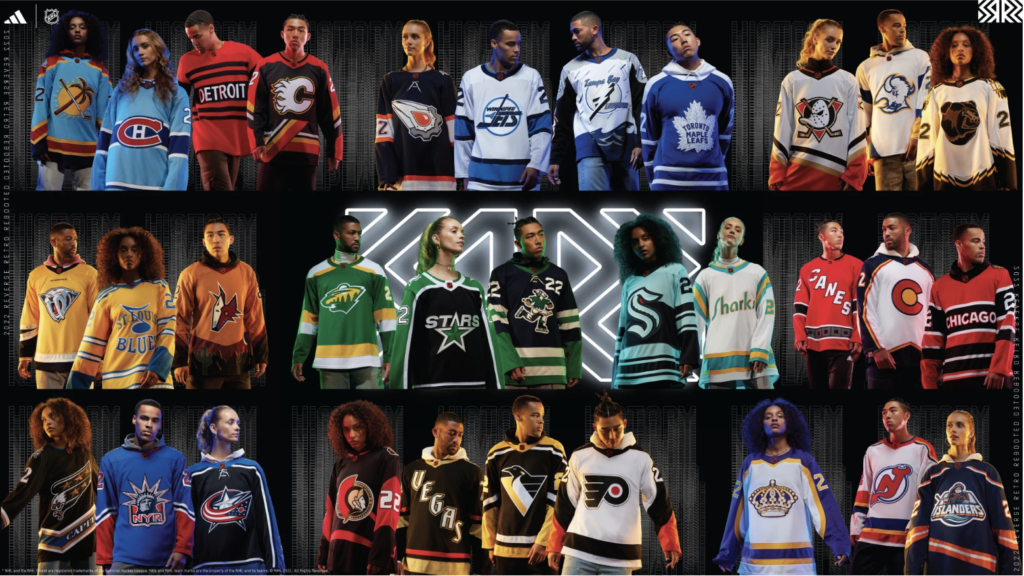 1) Jarrett asks – Best and worst reverse retro jerseys? Love the Penguins, not a fan of Columbus.
Jason Gregor:
I like LA and St.Louis and Islanders worst due to the fisherman logo.
Robin Brownlee:
I like Florida and San Jose in the old Seals colors. Like the Canucks as well. The Islanders captain Highliner jersey was hideous when it first came out and it’s hideous now. Same with Calgary — looked like it was designed in a Grade 10 graphics class when it came out and the same thing now.
Cam Lewis:
There are more good jerseys than bad here as most teams managed to either do good by a classic design or create something interesting and unique. The Pens and Capitals along with both New York teams really nailed their throwbacks, it’ll be fun to see the Golden Seals jersey again, and Arizona really nailed the whole desert look.
Tyler Yaremchuk:
Love Boston, Arizona, and Pittsburgh. Hate any team that just spelled their name across the front.
Baggedmilk:
Wrote about this on launch day, but I liked LA, San Jose, and Pittsburgh among others. Some of the worst teams were the Leafs, Jets (give me the Thrashers logo), and Montreal. 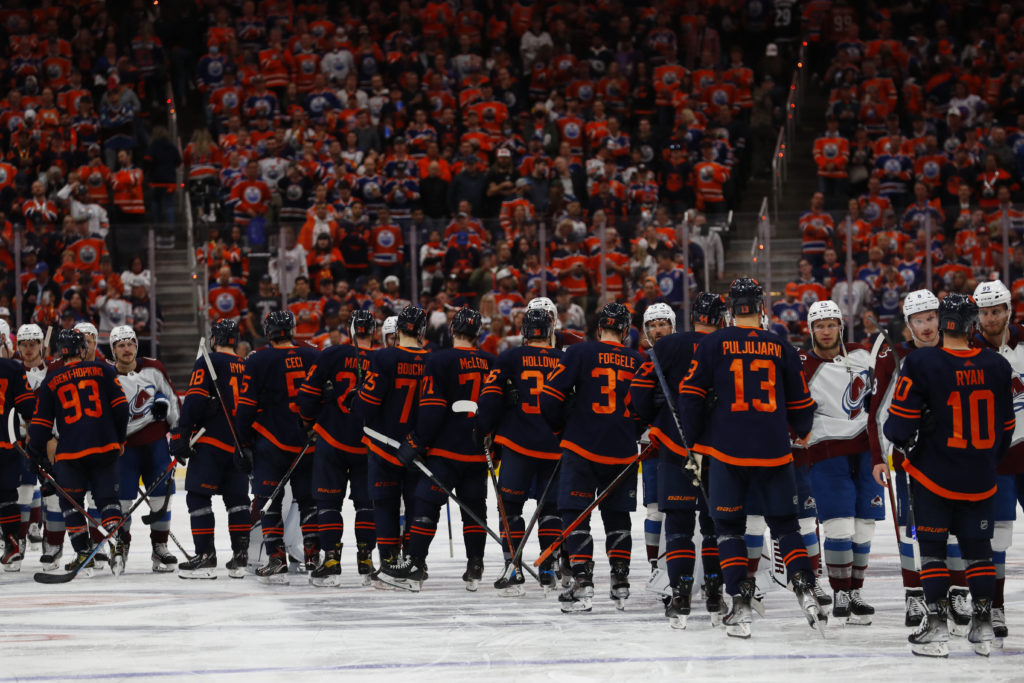 Jun 6, 2022; Edmonton, Alberta, CAN; the Edmonton Oilers line up to shake hands with the Colorado Avalanche after overtime in game four of the Western Conference Final of the 2022 Stanley Cup Playoffs at Rogers Place. Mandatory Credit: Perry Nelson-USA TODAY Sports
2) Erin asks – Went to the game on Thursday night against Carolina and there were plenty of empty seats at Rogers Place. The Oilers just went to the Western Conference Final, isn’t that surprising or has the team priced themselves out for too many people?
Jason Gregor:
Not really. Tickets are very costly, not to mention the food. To me, it illustrates that many fans will save their money and use them for rivalry games and playoffs. Edmonton will need to lower ticket prices if they want the building full.
Robin Brownlee:
I’m guessing the fact that people here and right around the world are getting hammered by runaway inflation has something to do with it, but I don’t know what the exact impact is. When things are tight, non-necessities get cut back. The price for a night out at the rink for a family of four is just too rich for a lot of people. Not a lot of disposable income right now.
Cam Lewis:
It ultimately comes down to money. The Canes are a good team but they aren’t an exciting draw because they aren’t a big market and they don’t have much star power. It’s hilariously expensive to go to a game now and people would surely rather save that cash for a more interesting match-up.
Tyler Yaremchuk:
Not surprising. It was a mid-week game against a small market opponent. Before the pandemic, attendance was even worse for games like this. The Oilers should do more things like their $50 student ticket deal that they had for the game against Buffalo. How about something like $100 gets you 4 upper bowl tickets so that families can attend? They have to get more creative so more people can attend games. But I’m not surprised that there were a lot of empty seats for a mid-week game vs Carolina.
Baggedmilk:
Part of it probably has to do with this being early in the year, but another factor is that it’s so damned expensive to go to a game. Food, tickets, drinks… that’s basically a mortgage payment at this stage. 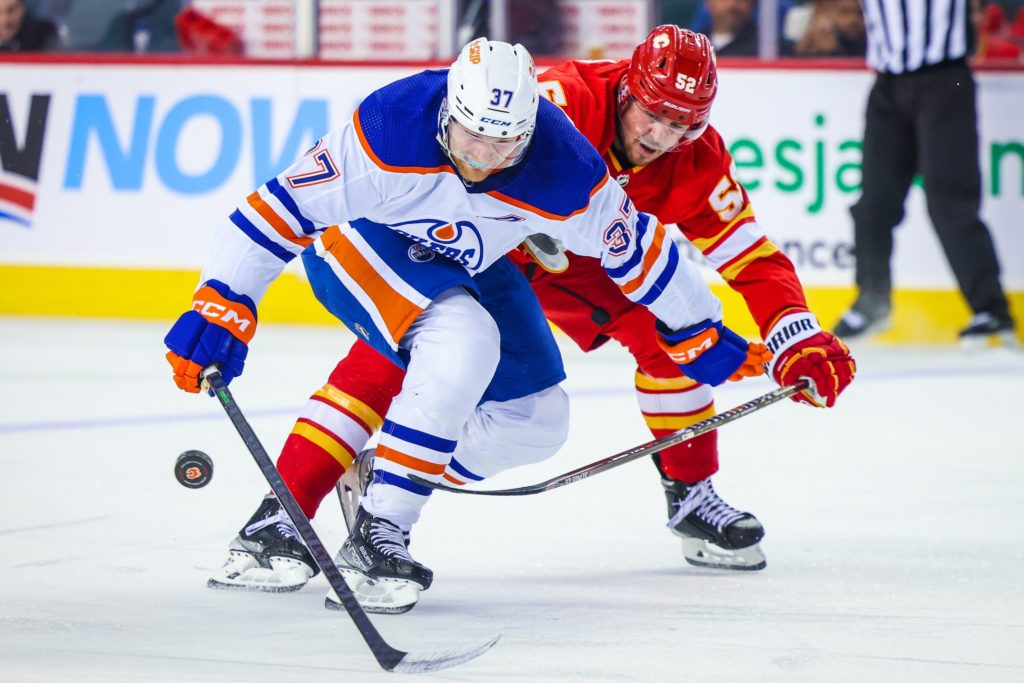 Sep 28, 2022; Calgary, Alberta, CAN; Calgary Flames defenseman MacKenzie Weegar (52) checks the puck away from Edmonton Oilers left wing Warren Foegele (37) during the second period at Scotiabank Saddledome. Mandatory Credit: Sergei Belski-USA TODAY Sports
3) Cliff asks – I’ve liked Warren Foegele’s game even though he’s been held off the scoresheet to this point (BM Note: three games when submitted) but what would we consider a successful year in his second season with the Oilers?
Jason Gregor:
Now that he is on the PK his value his higher. If he scores 12-14 goals and around 25-30 points, while outscoring teams at 5×5 it will be a success.
Robin Brownlee:
Let’s see more games like he played against Carolina and St. Louis. That would be a solid start.
Cam Lewis:
10 goals and 30 points would be solid production for Foegele but the Oilers badly need this player to be noticeable away from the puck on a game-to-game basis. A successful season for Foegele is him carving out a role as an effective checker who brings energy to the team with good forechecks and backchecks.
Tyler Yaremchuk:
If he hits the 15-goal mark and consistently brings a physical presence to the team’s bottom six then I think I would consider this season a success.
Baggedmilk:
He’s been solid so far, but I’m gonna need him to be somewhere in the 15-goal range to consider the season a success. 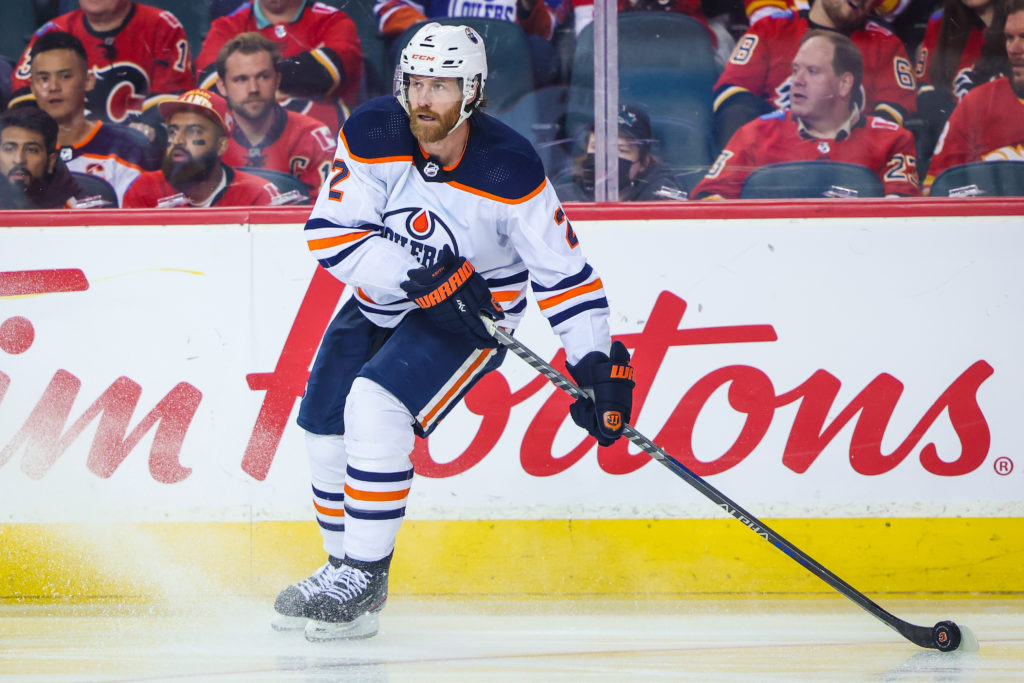 May 20, 2022; Calgary, Alberta, CAN; Edmonton Oilers defenseman Duncan Keith (2) controls the puck against the Calgary Flames during the third period in game two of the second round of the 2022 Stanley Cup Playoffs at Scotiabank Saddledome. Mandatory Credit: Sergei Belski-USA TODAY Sports
4) Ed asks – The Oilers have struggled defensively so far this year. Over under for shots allowed of about 40! How much of this is due to the departure of Keith? Did we not fully understand how important Keith was last year?
Jason Gregor:
Many people undervalued his ability to move the puck up quickly. It was comical how the same people focused solely on him supposedly not standing up at the blueline often enough. But the early season goals against are more than just the absence of Keith. I expect we will see them play better defensively as players get into a rhythm. They didn’t give up much v. STL. But Kulak needs to figure out his skate issue. Twice in the last four games, he has fallen in open ice which led to a breakaway. Doing it once is unlucky, but twice in four games suggests something is off with his skate or edge.
Robin Brownlee:
As far as shots go, the Oilers are averaging 32.8 shots against per game after Saturday, which is 12th. They were 32.3 and 12th last season.  This group will settle in. It takes time.
Cam Lewis:
They haven’t found somebody to step into that second pairing role on the left side next to Evan Bouchard and it’s really sent things out of wack. It’ll take a little bit of time for everyone to settle into roles they’re comfortable with.
Tyler Yaremchuk:
Yeah, possibly. He ate top four minutes and gave them fairly consistent results, but I think this is more a result of the pieces they do have underperforming. Their key defensemen have been making way too many mistakes and turning over the puck too often. If the guys they have play up to their potential, they’ll be fine.
Baggedmilk:
I didn’t think it would be a big deal at the time, but it’s looking like Keith is missed more than expected. Maybe I just expected more from the guys that were going to fill that spot? I dunno. 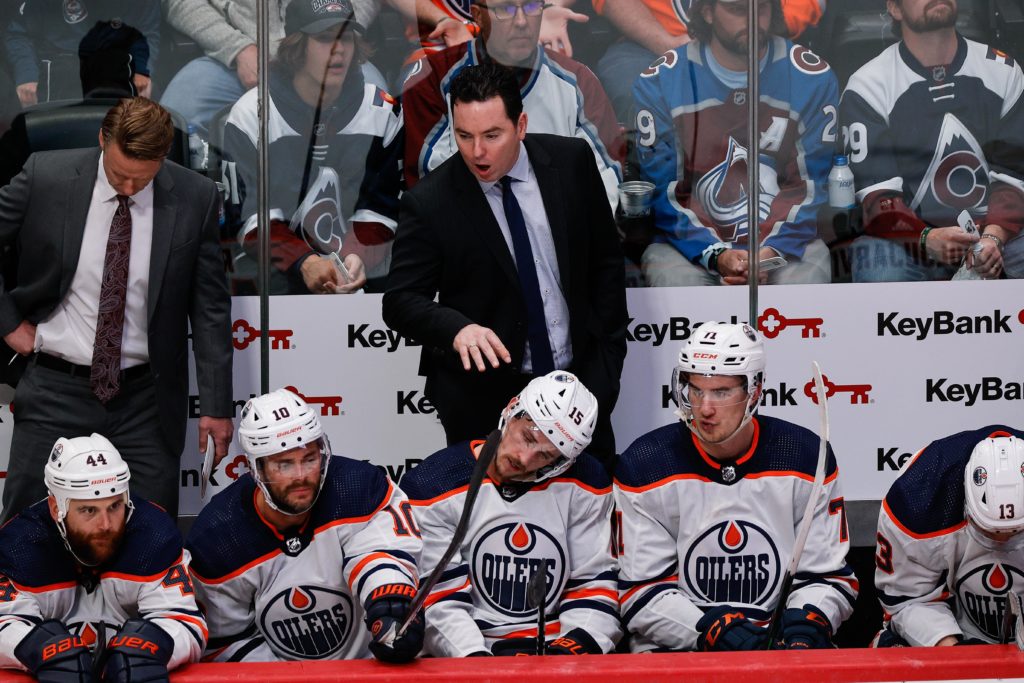 May 31, 2022; Denver, Colorado, USA; Edmonton Oilers head coach Jay Woodcroft talks with his players in the second period against the Colorado Avalanche in game one of the Western Conference Final of the 2022 Stanley Cup Playoffs at Ball Arena. Mandatory Credit: Isaiah J. Downing-USA TODAY Sports
5) Geoff asks – How much stock do you put into early results in the regular season? The Oilers have had an up-and-down start so far, but I think it’s still too early to get a good read on where they’re really at.
Jason Gregor:
A great start gives you room for error, like last year when they started 16-5 and then tanked at 2-11-2. As long as Edmonton doesn’t fall too far behind Vegas or Calgary it shouldn’t be a concern. October is a bit sloppier overall, so after 10 games then I think we get a better idea of who teams are.
Robin Brownlee:
Teams will change in terms of personnel and results over the course of a season and “getting a read” on them after five games doesn’t mean nearly as much as putting points in the bank, which the Oilers did last season before they hit the ditch for a stretch. Once you’ve got them, you’ve got them. You can’t win anything in October, but you can put yourself in chase mode and that’s no way to play over the long run.
Cam Lewis:
You should never take a five-game sample and draw overarching conclusions but there are some things from the first few games that are worrying, like the blueline looking out of flux and the efforts being poor off the hop.
Tyler Yaremchuk:
There are concerns and if they don’t go away soon, then I’d say its concerning. It is too early to be sounding alarm bells. I saw some people saying Ken Holland’s offseason was a failure… really? In game five of the season? Get a grip.
Baggedmilk:
Obviously, you want to win every game but that’s just not realistic. Right now, the Oilers are floating around .500 and even though that’s not where we want to be, it could be a whole lot worse. See: Canucks, Vancouver.