Monday Mailbag – Should the Oilers go the Cal Petersen route with Jack Campbell? 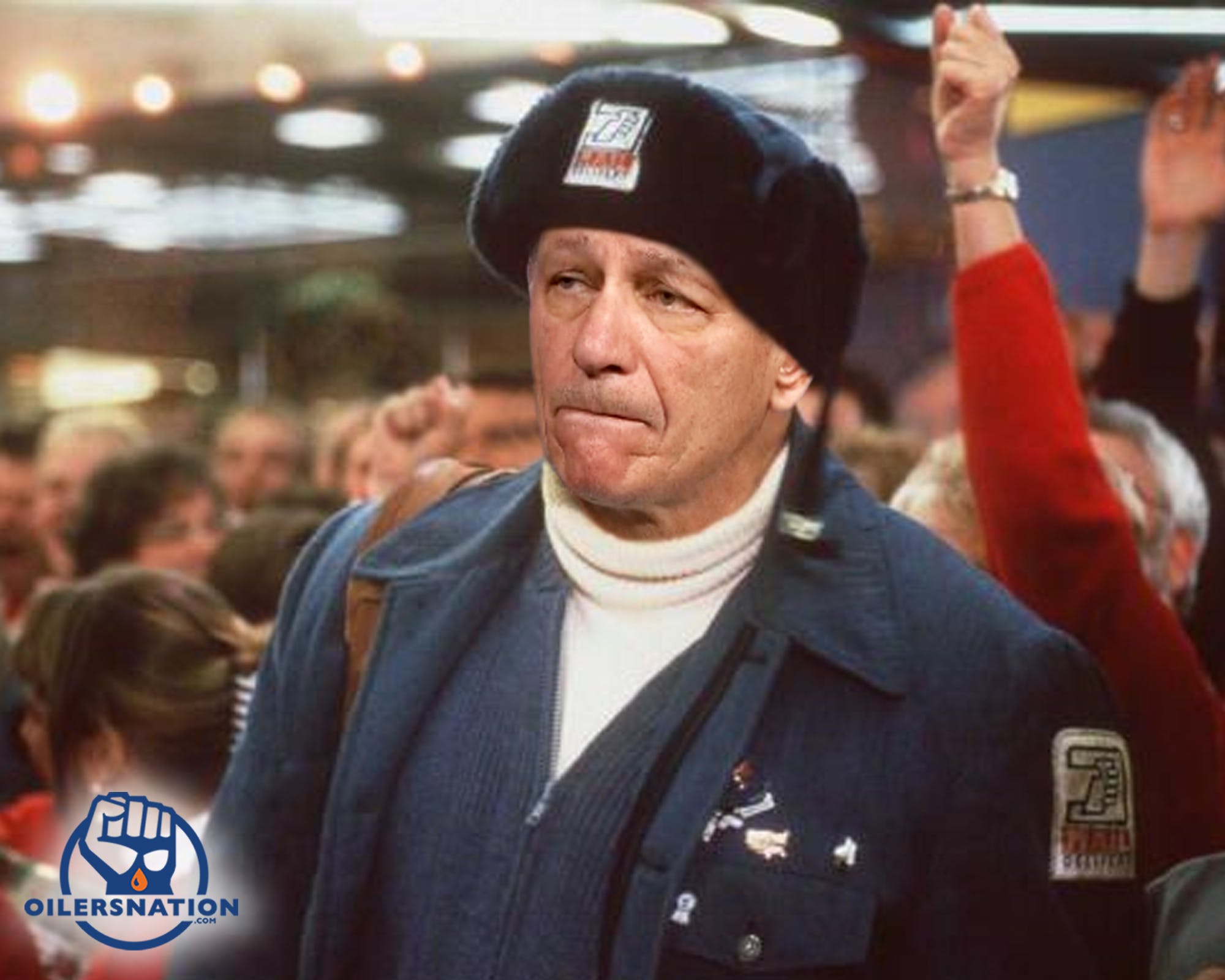 By baggedmilk
1 month ago
Happy Monday, dear Internet friends, and welcome to a brand new edition of the Mailbag to help you start your week and break down everything that’s happening with our beloved Edmonton Oilers. This week we’re looking at Jack Campbell’s continued struggles, McDavid and Draisaitl on the same line, Jesse Puljujarvi, and a whole lot more. If you’ve got got a question you’d like to ask, email it to me at baggedmilk@oilersnation.com or hit me up on Twitter at @jsbmbaggedmilk and I’ll get to you as soon as we can. 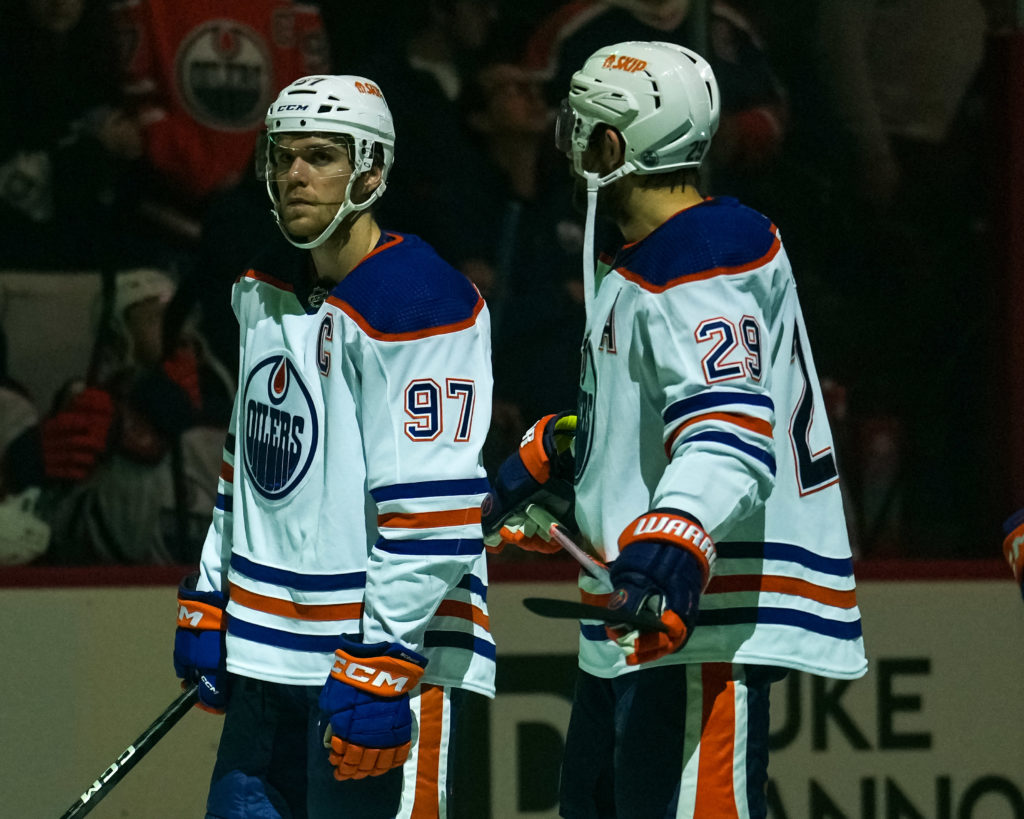 Dec 1, 2022; Saint Paul, Minnesota, USA; Edmonton Oilers center Connor McDavid (97) and center Leon Draisaitl (29) look on prior to the game against the Minnesota Wild at Xcel Energy Center. Mandatory Credit: Brace Hemmelgarn-USA TODAY Sports
1) Gregg asks – As much as it’s a lot of fun to watch Connor McDavid and Leon Draisaitl playing together, the overall depth is better when they’re apart. At this stage of the season, with these current injuries, would you rather have them on the same line or centering their own lines?
Robin Brownlee:
It’s not about having fun watching them. The Oilers have won four of their last five games while dealing with significant injuries at forward. Keep doing what works. I’d rather have them on separate lines, but that’s perfect world stuff. This is not that.
Tyler Yaremchuk:
I think it’s best to play them apart in the long run, but it’s hard to argue with the results. They also have some below-average teams coming up so letting 97 & 29 just run all over them is tempting. Keep them for now, but by January I’d have them apart again.
Baggedmilk:
I’d prefer to have them separated because I think the overall team depth is better when they are, but with that said, the Oilers are missing a lot of their top nine forwards right now and they need to get wins. This helps them get there. 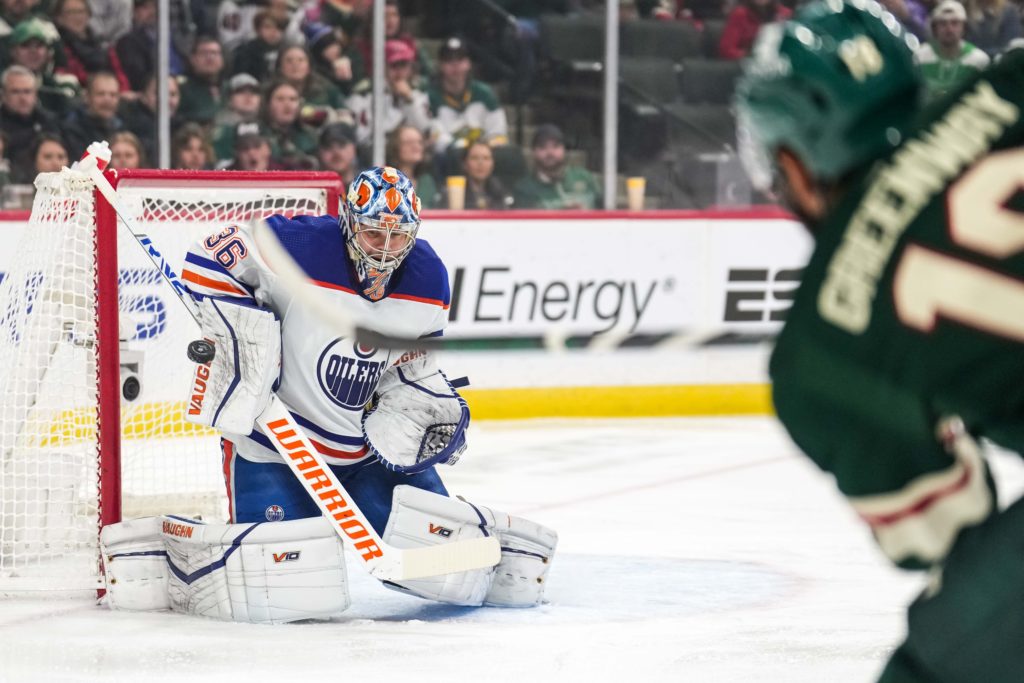 Dec 1, 2022; Saint Paul, Minnesota, USA; Edmonton Oilers goaltender Jack Campbell (36) makes a save during the first period against the Minnesota Wild at Xcel Energy Center. Mandatory Credit: Brace Hemmelgarn-USA TODAY Sports
2) @natebenke11 – Is there any circumstance where Campbell is sent down to the AHL to work on his game? Can we give Skinner the starter job with him being backed up by our best AHL tender?
Robin Brownlee:
Campbell has to find his game against NHL competition, not minor league competition. The schedule allows him to be spotted in.
Tyler Yaremchuk:
No. Too early in his tenure here. If things haven’t gotten better by January then I would consider it but right now it’s just too early. Ride out Skinner for now and wait and see on Campbell.
Baggedmilk:
Jason talked about that this week and I get it after the Cal Petersen thing in LA, but I just can’t see it happening. My guess is that they’re going to give Stu the reigns here for a bit and Jack will have to work on his game in practice. 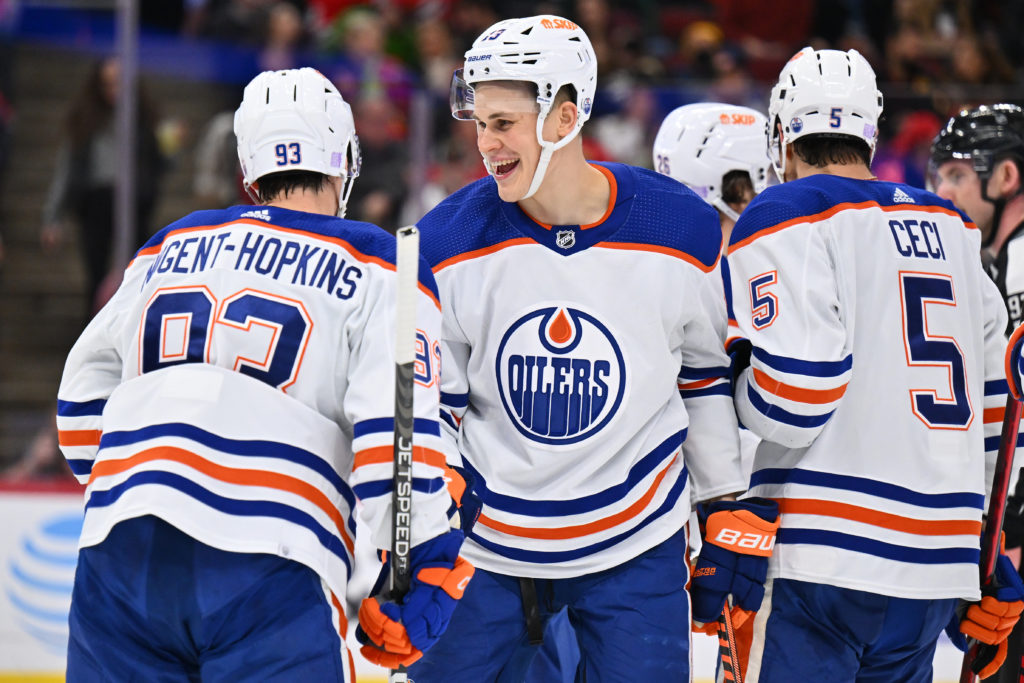 Nov 30, 2022; Chicago, Illinois, USA; Edmonton Oilers forward Jesse Puljujarvi (13) celebrates with forward Ryan Nugent-Hopkins (93) after Nugent-Hopkins scored a goal in the second period against the Chicago Blackhawks at United Center. Mandatory Credit: Jamie Sabau-USA TODAY Sports
3) Ed asks – So far this year Jesse Puljujarvi has shown, at least to my eye, a more consistent physical game. Do you think that this is a sign that JP may be embracing what he is, i.e. a big winger who has some skill, but not the hands or instincts of a scorer?
Robin Brownlee:
I hope so. He has to find a niche and being consistently physical is one of them. He led everybody in hits against Montreal.
Tyler Yaremchuk:
I don’t think he is fully embracing it but it’s definitely what he needs to do if he wants to have more success as a top six winger. Be a power forward, not a skilled player.
Baggedmilk:
I like it too. If he can develop a little bit of a mean streak it would give him some extra space out there, which could lead to more goals going in for him. In the meantime, however, I like seeing him more engaged out there because our boy is a giant. 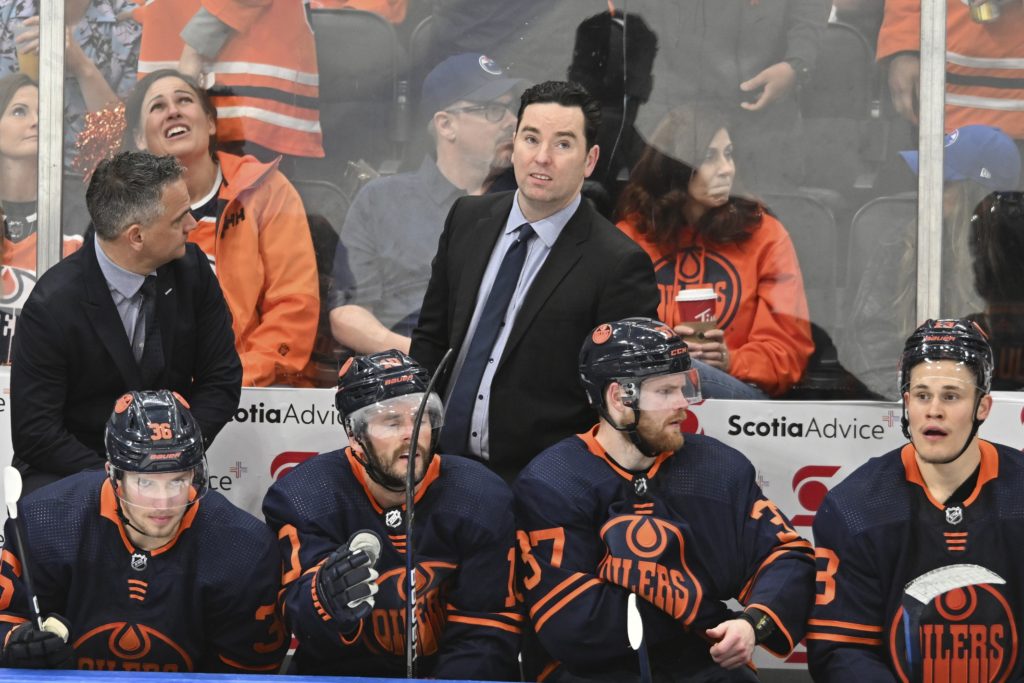 Jun 6, 2022; Edmonton, Alberta, CAN; Edmonton Oilers head coach Jay Woodcroft reacts during the third period against the Colorado Avalanche in game four of the Western Conference Final of the 2022 Stanley Cup Playoffs at Rogers Place. Mandatory Credit: Walter Tychnowicz-USA TODAY Sports
4) Hal asks – Jay Woodcroft seems to be leaning on his top players more than he did when he first came up from Bakersfield but I’m not sure if that’s just recency bias or not. Have you noticed any changes in Woody’s tactics since last season?
Robin Brownlee:
Sure. Start with the absences of Evander Kane and Kailer Yamamoto. That’ll change your tactics, no?
Tyler Yaremchuk:
I am noticing that as well. I hope it’s just a product of the injury issues and not a real change is philosophy.
Baggedmilk:
There are a lot of absences on the roster and a bunch of guys that aren’t scoring, so it’s not exactly surprising that he’s leaning on the guys that are contributing. 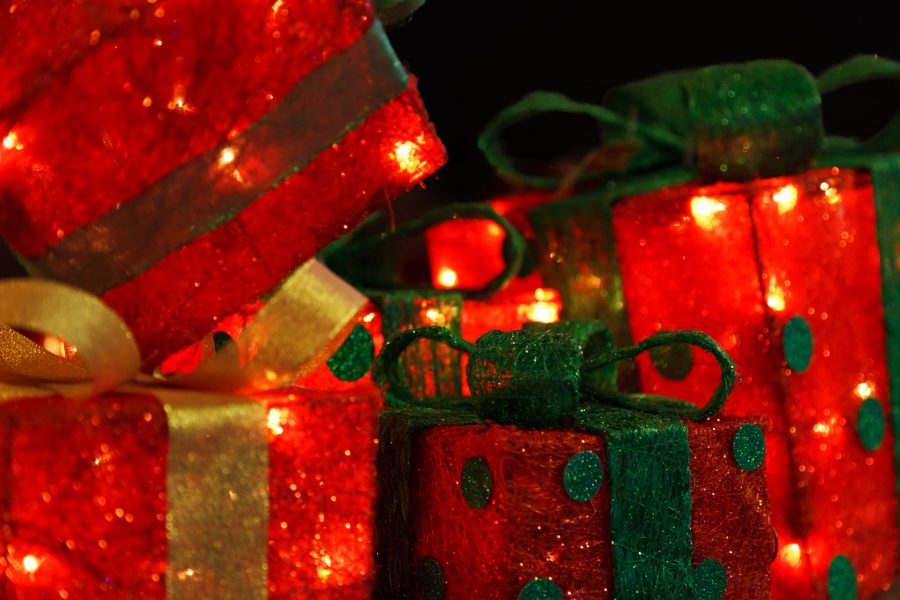 5) Oilers fan in Van asks – We’re in December already and that means finding a gift for my wife that shows I’ve put some thought into it. If you could give me the most successful present you’ve ever bought your significant other I would be grateful for the inspiration.
Robin Brownlee:
Does asking people on a hockey website for gift suggestions qualify as putting some thought into it? That aside, Slippers for around the house. Quality, comfortable slippers are a go-to gift. That or the rubber Vampirella body suit. Or both.
Tyler Yaremchuk:
The key is to get them something that they haven’t explicitly asked for. That’s my advice.
Baggedmilk:
I would buy her 200 grams of roast chicken deli meat and a 50-pack of Kraft singles. Who doesn’t love a good charcuterie board?