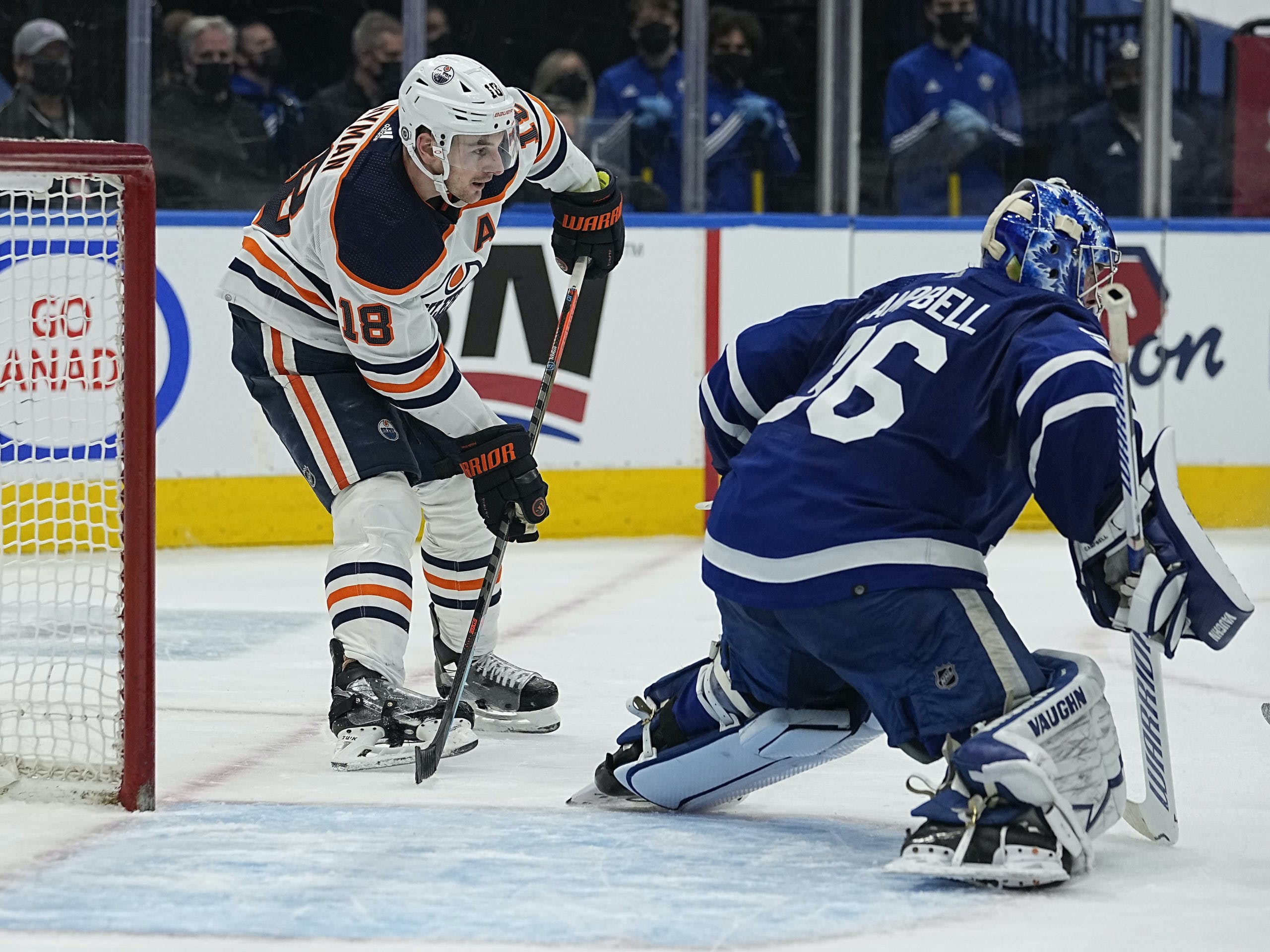 By Zach Laing
4 months ago
Zach Hyman is a big Jack Campbell guy.
So much so that when Edmonton Oilers GM Ken Holland called him asking for a review of the now-former Leafs tender, all Hyman had was a glowing review.
“First and foremost, you want to be around guys who are just fantastic individuals and have high character, and everyone here knows how highly respected he is in the locker room and among the media and the fans. So, I made that clear,” Hyman told Sportsnet’s Luke Fox. “And then obviously, such a great goalie. So, just spoke pretty highly — and happy that it ended working out.”
The review is glowing for the new Oilers netminder. Hyman noted how motivated Campbell is as a goaltender, and he sees the motivation already.
“He’s earned it. I think he’s earned the right to have that job and to have that opportunity,” Hyman said of Campbell being a starting goalie. “I’ve seen it. He’s capable of doing it.
“And I think he’s motivated this year to prove it over and over again. He’s a guy who is too hard on himself at times. So, he’s always motivated.”
Also noted in the article is that Hyman and his wife, Alannah, are expecting baby numer two in the coming days. An early congratulations to them.

Another thing mentioned in Fox’s article: Hyman, Connor McDavid and Darnell Nurse are all training with Gary Roberts back in Toronto in what’s dubbed the “mini Oilers gym.”
It’s great to see the trio of key Oilers players working together once again in the offseason. Roberts has some tremendous work with players in recent years, so undoubtely those three will have their work cut out for them.

A promotion for Lauer

Brad Lauer is heading to the bigs.
The Edmonton Oil Kings head coach has been hired as an assistant coach with the Winnipeg Jets under their new head coach, Rick Bowness.
“I was very fortunate that I walked into an organization in the Oil Kings that had an excellent staff to work with,” Lauer told the Edmonton Sun Thursday. “It’s kind of neat to look back four years later, for me, that first year was a great year for our organization to get started.
“Every year after that, we were fortunate to draft good kids, they developed and they believed in what we wanted to do here as a staff and organization. Every time we brought guys in, they bought into our system and what we wanted to do and where we wanted to go, and when you have guys buying in, as a coaching staff, things are a lot easier.”
Lauer, 55, is no stranger to the NHL having been an assistant coach with the Ottawa Senators between 2009-11, the Anaheim Ducks between 2012-15, and the Tampa Bay Lightning between 2015-18.
He spent the last four years as the bench boss of the Oil Kings and leaves as one of the best in the team’s modern day history. Over four years, he posted a 154-46-13-10 record winning the Eastern Conferecne title in his first year, and a WHL Championship and a trip to the Memorial Cup this year. In each season, the Oil Kings were Central Division Champions.

Chiasson to the Juniors

Oilers prospect Jake Chiasson has been named to Hockey Canada’s National Junior Team summer development camp roster. Chiasson, 19, just wrapped up his third season in the WHL with Brandon Wheat Kings.
Chiasson’s struggled to stay healthy during his WHL career missing games in each season. Still, he’s amassed 38 points in 43 games over the past two seasons.
Getting the call to camp is a great opportunity for Chiasson and who knows what can happen. He might even be able to work his way onto the roster.
Zach Laing is the Nation Network’s news director and senior columnist. He can be followed on Twitter at @zjlaing, or reached by email at zach@oilersnation.com.