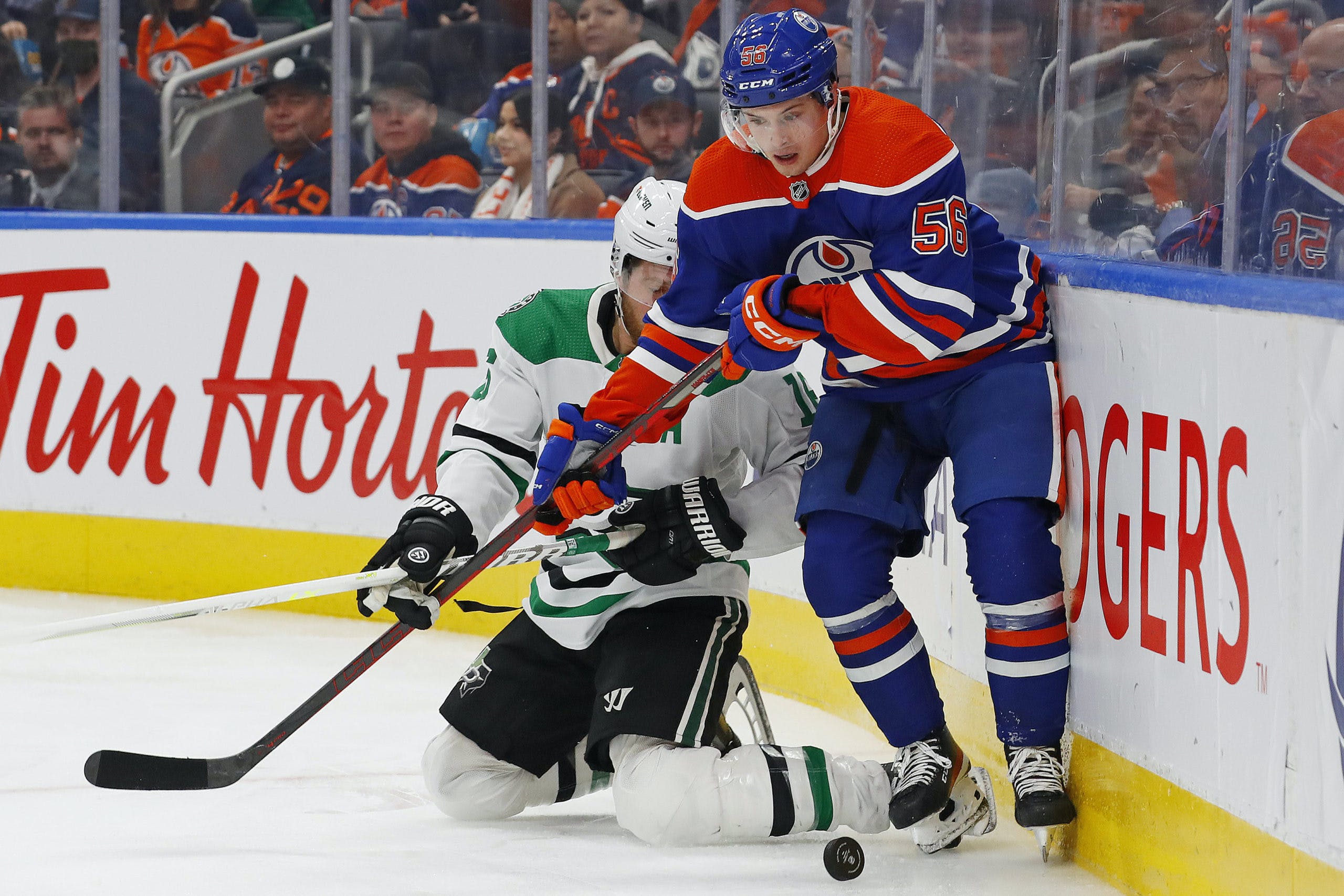 By Zach Laing
1 month ago
The Edmonton Oilers are rolling out a new-look forward group.
Practicing Sunday in Washington ahead of a Monday night game, the Oilers elevated Jesse Puljujarvi to the top line alongside Connor McDavid and Ryan Nugent-Hopkins. The coaching staff also moved Kailer Yamamoto to the fourth line alongside Devin Shore and Dylan Holloway.
Zach Hyman bumps down from the top line to play alongside Leon Draisaitl and Evander Kane on the second line, while Derek Ryan slides to the third line on the right wing of Derek Ryan and Warren Foegele.
It appears Stuart Skinner is likely to get the start Monday.

Oilers prospect Carter Savoie got his first two professional hockey goals Saturday night as the Bakersfield Condors beat the Henderson Silver Knights 6-3.
His first goal came as the 5:04 mark of the second period while his second — the game winner — came at the 8:42 mark of that same frame. For Savoie, it’s also his first two pro points playing in his fourth game of the year.
On his first goal, he came into the offensive zone on a two-on-one with Seth Griffin cashing in on a cross-ice pass.
On Savoie’s second, he scored after two teammates crashed the crease. Savoie slid to the right side of the net cashing in on a loose puck.

Tkachuk under fire for eye poke

Matthew Tkachuk is awaiting a hearing with the NHL’s department of player safety after he poked LA Kings goaltender Jonathan Quick in the eye through his mask.
The incident happened with one second left in the Panthers 5-4 loss at the hands of the Kings Saturday night.
Tkachuk was handed a two minute minor for goaltender interference and a 10-minute misconduct.

The NHL has deemed recent Boston Bruins signee Mitchell Miller ineligible to play in the leauge.
Commissioner Gary Bettman said Saturday the league wasn’t consulted on the signing of Miller, who repeatedly abused a Black, disabled child in middle school. Along with using racial slurs against Isaiah Meyer-Crothers, Miller and another student made Meyer-Crothers lick a lollipop that had been wiped against a bathroom urinal.
“What he did as a 14-year-old is reprehensible, unacceptable,” Bettman said. “Before the Bruins made the decision to sign him, we were not consulted. I happened to talk to Cam Neely since the time that he was signed. He’s not coming into the NHL. He’s not eligible, at this point, to come into the NHL. I can’t tell you that he’ll ever be eligible to come into the NHL.
“If, in fact, at some point, they think they want him to play in the NHL — and I’m not sure that they’re anywhere close to that point — we’re gonna have to clear him and his eligibility and it’ll be based on all the information we get firsthand at the time. So the answer is, they were free to sign him to play somewhere else, that’s another league’s issue. But nobody should think, at this point, he is or may ever be NHL-eligible.”
Miller’s agent, Eustace King of O2K Sports, released a statement on Miller Sunday.
Zach Laing is the Nation Network’s news director and senior columnist. He can be followed on Twitter at @zjlaing, or reached by email at zach@oilersnation.com.
Featured
Nation Takes
Oilers Talk
Recent articles from Zach Laing