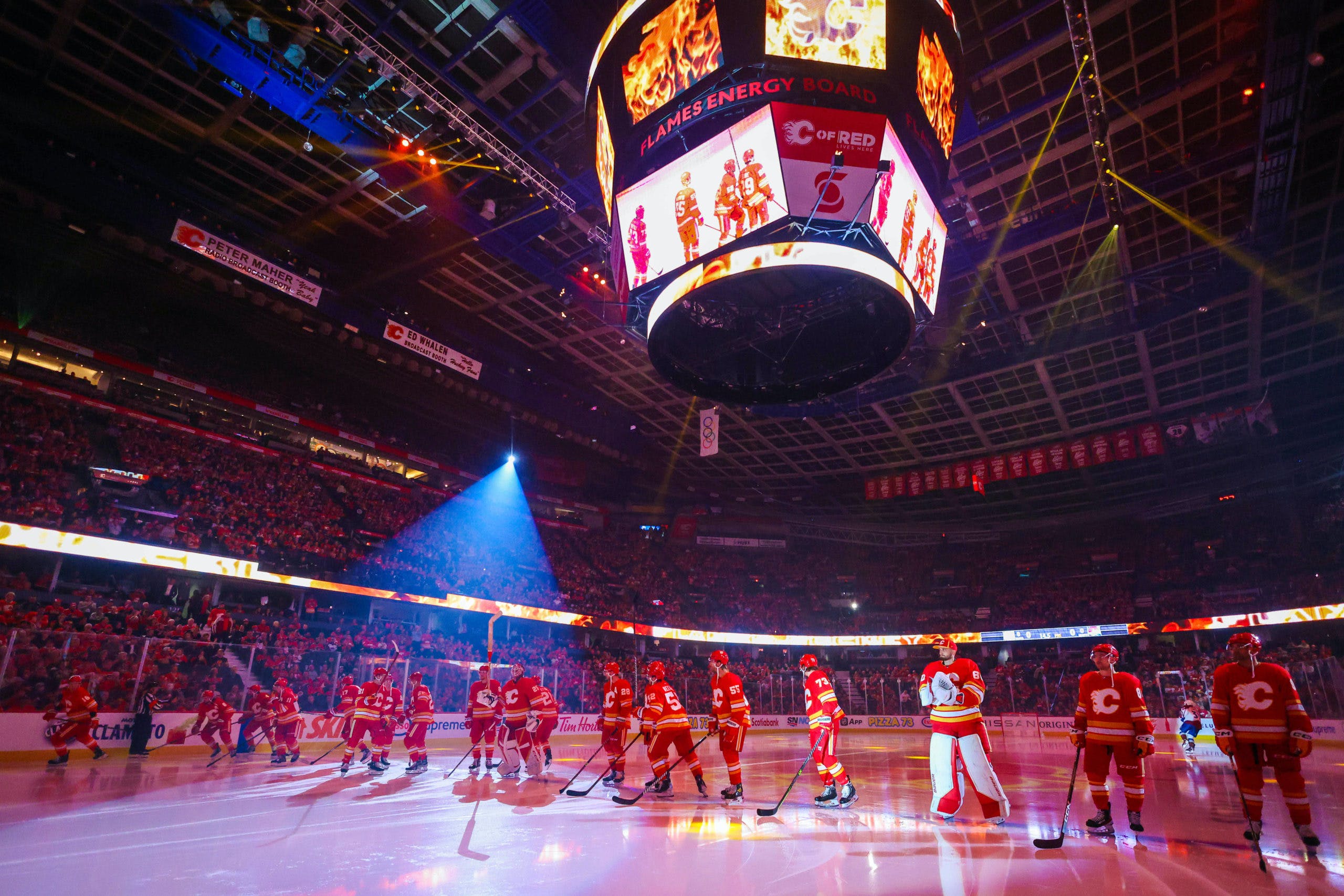 By Zach Laing
1 month ago
Edmonton Oilers forward Dylan Holloway missed practice Wednesday a day after taking a huge hit against the Buffalo Sabres the night prior.
Holloway was hit hard by Ilya Lybushkin after taking a pass in the neutral zone. He dropped to the ice, but skated off the ice under his own power.
Oilers head coach Jay Woodcroft didn’t have any update Wednesday, other than the forward had a cut on his nose, and was in good spirits but didn’t skate.

Arena talks have reignited in Calgary months after the prvious deal was kiboshed.
Down the QE2, the City of Calgary and the Calgary Sports and Entertainment Corporation have begun formal negotiations once again.
Ryan Pike, the editor of FlamesNation, has had a great pulse on this beat for the last number of years. Here’s what he had to write about it today:

The previous deal, which saw the City contributing $287.5 million in direct construction costs (plus some expenditures relating to transportation upgrades and Saddledome demolition) and CSEC on the hook for the remainder of the construction costs, fell apart at the end of 2021 amidst concerns of rising costs, with CSEC opting not to move forward. (At the time, estimated construction costs were roughly $650 million, and a final construction budget for the facility was still months from completion.) The City rapidly created the event centre committee, aimed at coming up with a game plan for constructing an event centre.How significant is this development? It’s pretty significant. Prior to the restart of formal negotiations, informal communications between the two parties were facilitated by the City’s appointed third party: think of it like having an envoy to help pass notes back and forth. Evidently enough positive things emerged from those informal chats to make both sides want to restart formal negotiations. That’s definitely a good sign. But there’s likely still a ways to go to hammer out a deal.

A fractured room in Vancouver

So much tea is being spilt over what’s happening in Vancouver these days.
Today, it was former NHL’er and current Chicago Blackhawks TV analyst Colby Cohen who was on Daily Faceoff Live with Frank Seravalli. Cohen said he heard there was friction in what’s been described as a cliquey dressing room.
Here’s some of what CanucksArmy’s Chris Faber wrote. The bold quotes are from Cohen and later Seravalli, while the rest was penned by Faber.

“I’ve heard there’s a lot of friction in that dressing room between some of the star players and then the rest of the team,” said Cohen. “It’s real cliquey in that dressing room. The way that they’re promoting players, particularly on their social media channels, and just everything that I hear coming out of that dressing room, it seems really dysfunctional at the moment.”
Cohen went on to speak about the healthy scratch of Conor Garland on Tuesday night and believes that the decision to not play Garland is something that rubs players the wrong way.
“This is the one player who you would never want to take out of your lineup because he plays the right way,” said Cohen. “When you watch him, he doesn’t cheat, he stops on pucks, he goes to the net, he plays bigger than he is. He really does put it all on the line and you can’t necessarily say that about every player in Vancouver right now, [it] did not make sense to me. I think that decision rubs a lot of players the wrong way. Other players take that personally, and not in a way to rev them up, but almost in a way that you would get pissed off at your coach and your management team for making that decision.”
Seravalli also went on to say that it sort of feels like something is coming for this team.
“Whether that’s a trade or a coaching decision, whatever that may be, I feel like the Canucks are in a spot where they can’t let this season get away from them,” said Seravalli.
The Canucks recently made a trade with the Blackhawks, the team that Cohen works for. They sent Jason Dickinson and a second-round pick to the Blackhawks for Riley Stillman.
It’s clear that the Canucks cannot continue to go down this path of not only losing games but losing leads en route to losses. Something needs to change and it needs to change quickly before this team spirals into a hole that they cannot dig themselves out of.