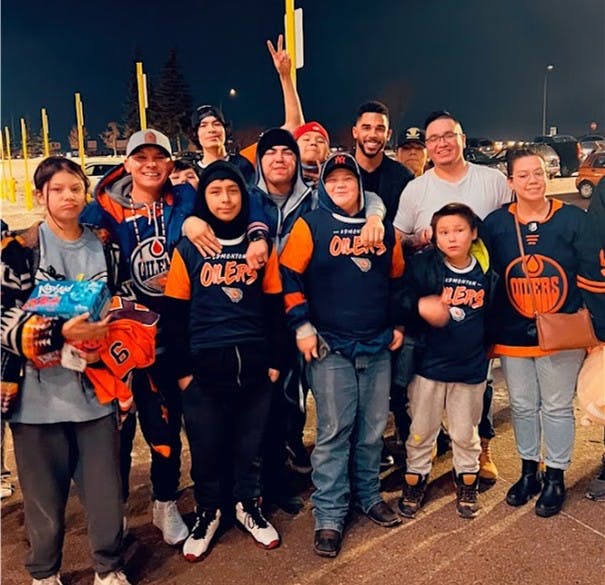 By Zach Laing
1 month ago
Edmonton Oilers forward Tyler Benson has cleared waivers and has been loaned to the AHL’s Bakersfield Condors.
Benson will head down to California with a chance to provide a big spark to a struggling Condors team. The 24-year-old had just came back from the LTIR after suffering a lower-body injury late in training camp and drew in for just two games with the Oilers.
As I wrote yesterday, Benson’s been a great producer at the AHL level scoring 38 goals and 155 points in 177 games with the Condors. He is the AHL Condors’ all-time leader in assists, with 117, and ranks third with 155 points.

Evander Kane had quite a charitable day on Thursday. He, with help from the James H. Brown Injury Lawyers, gave 100 students from the Maskwacis Cree High School and area a $250 shopping spree.
According to a Facebook post from the high school, some of the students used that money on groceries for their household and when Kane found out, he gave those students an extra $250 for themselves.

The Canadian World Junior squad is getting a major boost. Shane Wright, Brandt Clarke and Dylan Guenther are all being loaned by their respective NHL clubs to the Canadian club.
The Canadian squad already had the likes of young stars in Connor Bedard, Adam Fantilli, Logan Stankoven and Olen Zellweger, and boy — are the rich getting richer.
Here’s some of what Daily Faceoff’s Steven Ellis wrote about them being able to represent their countries:

For Wright, the decision to go back was obvious. The Seattle Kraken have been rolling along quite nicely with the group they have, and there was no room for Wright consistently. His conditioning stint with the Coachella Valley Firebirds was a success, and he scored in his return against the Montreal Canadiens on Tuesday, but that didn’t do anything to change the game plan. It was clear about five games into the season that sending Wright to the WJC was the way to go, and he’ll almost certainly center Canada’s top line.
He’ll be joined by his 2021 U-18 World Championship linemate in Guenther, who has spent the entire season with the Coyotes up until now. He was a healthy scratch early on during his Coyotes tenure, and other than a handful of games in which he eclipsed the 15-minute mark, he’s mainly been a depth scoring option for Arizona in his first pro season. He’s been excellent with Canada previously and was one of the most dominant players in all of junior hockey last year. Add in his 21 games of NHL experience and this will be a huge opportunity for Guenther, who should return to the Coyotes once the tournament ends.
Clarke was a bit of a surprise to make the Kings out of training camp, but it became clear based on his early usage that the team viewed his time working with the coaching staff to be more valuable than beating up on the OHL. He had two assists in nine games with the Kings before getting a five-game conditioning stint in the AHL, where he eventually scored his first pro hockey goal. His relationship with Hockey Canada is a bit more interesting: he was excellent at the U-17 World Challenge in 2019 and was one of the team’s most important players on the 2021 U-18 squad, but wasn’t invited to the WJC camp last year and didn’t play on the summer team, either. Given his NHL experience, there was no excuse the team could hide behind now – and, really, given his play pre-camp last year, Clarke should have been there, too.

Oilers prospect Reid Schaefer, meanwhile, stared on the “fifth line” at camp alongside Colton Dach and Joshua Roy.
Zach Laing is the Nation Network’s news director and senior columnist. He can be followed on Twitter at @zjlaing, or reached by email at zach@oilersnation.com.
Featured
Nation Takes
Oilers Talk
Recent articles from Zach Laing