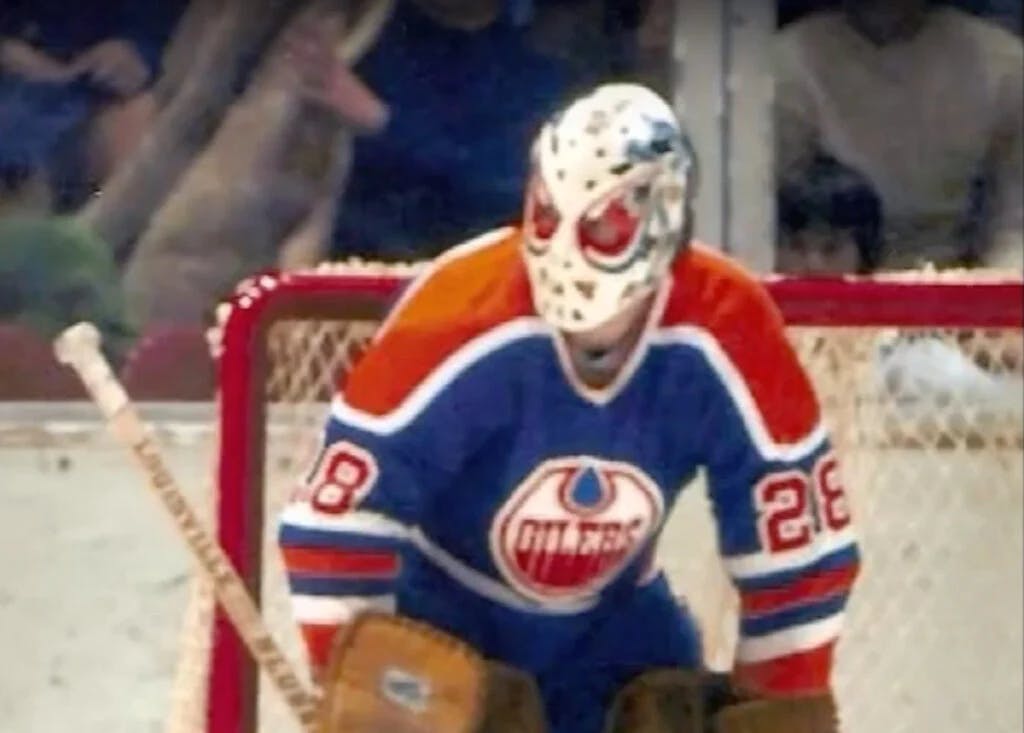 By Zach Laing
3 months ago
Former Edmonton Oilers goaltender Dave Dryden has passed away at 81 years old.
Dryden spent five years in Edmonton playing in the final four years of the Oilers’ time in the WHA and their inaugural season in the NHL.
He got his start with the Chicago Blackhawks where he played three seasons, before spending four with the Buffalo Sabres. Dryden joined the WHA’s Chicago Cougars for the 1974-75 season, before the Oilers selected him in a dispersal draft.
In the WHA, Dryden posted a 94-87-9 record and a 3.42 GAA, and in the 1979-80 season when the Oilers joined the NHL, he went 2-7-3 with a .849 save percentage.
Dryden was considered an innovator of the goaltending position. Here’s some of what former professional goaltender Mike McKenna wrote at DFO:

He was an excellent goaltender. But people may not know that Dryden was a true innovator. He pioneered the first cage combination goalie mask and was an instrumental figure in equipment design.
Legendary mask maker Greg Harrison had plenty to share on what Dryden contributed to the position.
“Dryden would show up at Cooper (the hockey company now known as Bauer) when I was working there,” Harrison said. “He’d come into the design department and ask, ‘Why do we need all this leather on the glove and blocker? We can use nylon and make it lighter.’ ”
It was trial and error back then. The nylon worked well in areas of the equipment that didn’t come in contact with the ice very often. So Dryden, along with the equipment designers at Cooper, tinkered until they found the magic combination of weight and durability.
According to Harrison, many of Dryden’s ideas would end up in Cooper’s product line the next year. Retail buyers directly benefited from Dryden’s curiosity.
“He was such a humble man,” Harrison said of his friend. “He never received any credit. Not that I think he wanted it anyway.”

The Calgary Flames made a big move on Friday signing MacKenzie Weegar to an eight-year contract extension carrying an AAV of $6.25-million.
The deal, which kicks off in 2023-24, is a team-friendly one considering how strong of a defenceman Weegar has been.
Here’s some of what Steven Ellis wrote at Daily Faceoff:

The Flames have now signed Weegar and Huberdeau to eight-year deals, making the most of the blockbuster deal. Weegar and Huberdeau will have their extensions kick next season, while Nazem Kadri is in the first year of his seven-season deal. The Flames also have goalie Jacob Markstrom (until 2026), forward Andrew Mangiapane (2025) and defenseman Rasmus Andersson (2026) locked up to keep the core together for the next few seasons.

Led by GM Brad Treliving, the Flames are in their contention window now and should compete for the top spot in the Pacific Division. The team lost Tkachuk and Johnny Gaudreau this summer, but Huberdeau is a 100-point player himself and Weegar instantly made Calgary’s blueline so much stronger. Add in Kadri’s presence, and it looks like the Flames are very serious about fighting for the Cup.

It’s been an interesting training camp in Toronto with captain John Tavares out due to injury. While the team hasn’t yet ruled him out for the season opener, an oblique injury suffered Sept. 24th had him ruled out for three weeks.
That puts a potential return for the Leafs’ Oct. 12 season opener in doubt.
Over at TheLeafsNation, James Reeves warns caution on their approach with Tavares:

Rushing the 32-year-old centre back into the line-up could have adverse effects on the team. Obliques are important muscles near the abdomen that help support internal organs and the spine, allowing people to stand up straight. It can affect a hockey player’s ability to skate properly and will be very uncomfortable if it does not heal fully. Having Tavares suffer through discomfort just to have him on the ice may not be the right move.
Tavares was hoping to enter this season with a clean bill of health after spending the last off-season recovering from the horror injury suffered in game one of the Leafs’ 2021 playoff series against the Canadiens. His health will be of paramount concern after such a significant injury, one he was able to recover from and put up 76 points (27 goals, 49 assists) in 79 games. Having him return to the ice when he is 100% healthy, not just feeling good enough, should be the priority for the team.
Keefe’s words did not necessarily suggest that the team will have Tavares for the season opener, and it would be foolish to believe the team’s backroom staff would not take anything but the utmost care with the captain’s health, but the risk of re-injury will linger until Tavares shows that he is fully recovered.