NHL Notebook: How did we miss on Tage Thompson, abolishing NHL’s overtime rules and more 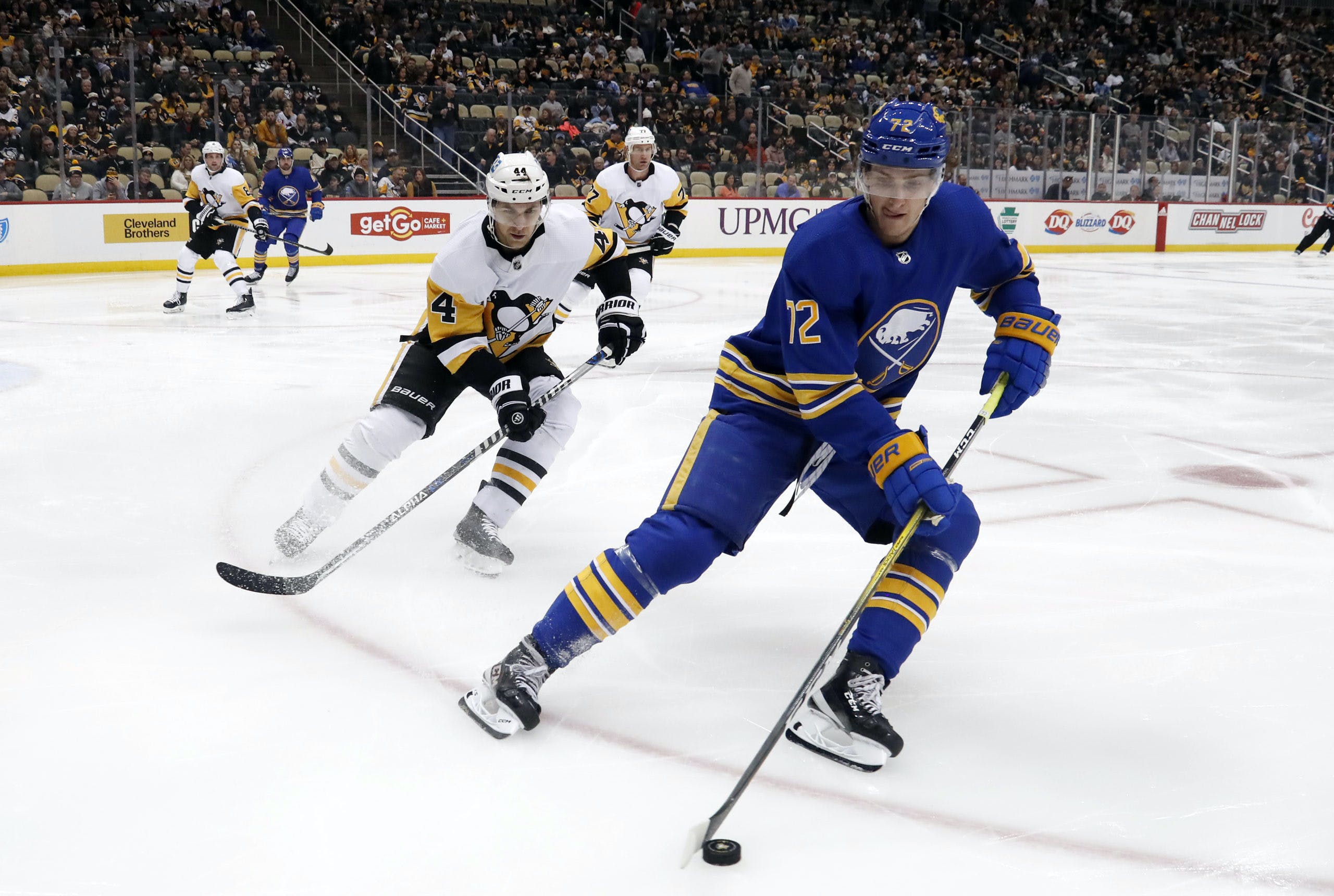 By Zach Laing
1 month ago
Tage Thompson is a perfect example for how scouting in the NHL is never exact.
Drafted by the St. Louis Blues 26th overall in the 2016 draft, it took years for the 6’7″ now centre to find his game in the NHL. His rookie season with the Blues in 2017-18 was unspectacular, and he became a key piece in the 2018 Ryan O’Reilly trade heading back to Buffalo.
The lack of success followed as Thompson played in 104 games between 2018-19 and 2020-21 scoring a meagre 26 points. He was far from projecting as the player he was drafted to be, and looked like he’d be lucky to eke out a role as a bottom-sixer.
But last year — and even more so this year — he’s broken out of his shell. This season alone Thompson has scored 26 goals and 50 points in 32 games for the Sabres.
Over at Daily Faceoff, Steven Ellis looked into what changed for Tage. Here’s some of what he wrote:

Many public scouting reports said that Thompson had the potential to become a top-six player in the vein of Jamie Benn. Defensively, everyone seemed to agree he struggled. But not only has that improved with NHL coaches, he isn’t out there to shut guys down, anyways. He’s got the scoring part figured out, and that’s what he’s paid to do.
Here are a few more: Jeff Cox, a USHL assistant GM and a staple of the amateur hockey scene, called Thompson’s ceiling “extremely high” ahead of the 2016 draft. Sportsnet’s Gare Joyce took the more cautious approach, saying scouts had “mixed feelings” regarding Thompson’s transition to the next level.
Those mixed feelings can be attributed to the obvious: was he going to bring more than size to the table? His skating was excellent, and he could definitely shoot, but outskating college players is a whole different animal. But his size definitely gave him more looks than others with similar skillsets, but I still don’t think anyone
Just talking to scouts that followed that 2016 draft, many had high hopes in Thompson. Some even used the word “future star” when describing their thoughts on him from back in the day. Is there a bit of revisionist history? Maybe, but there were high hopes for him when he came into the league after just two college seasons, only for him to fall flat. His NHL future looked uncertain, and when he was moved to Buffalo in a trade that sent Ryan O’Reilly to the Blues in 2018, Thompson’s inclusion almost felt like an afterthought.
The consensus? The star qualities were there, but scouts were cautious. He’s a unique figure. We haven’t seen a big man dominate like this since, maybe, Eric Lindros in his prime? You don’t see human iterations of the Empire State Building turning into skilled scoring stars all too often. It seemed like some scouts wanted to go all-in, but the precedent just wasn’t there. But now Thompson is carving his own path, and he’s one of the best players in the world right now.
There’s only so much you can watch and evaluate of a 17/18-year-old prospect before they get drafted. You’re looking at projectables – someone can dominate against kids, but what translates to the NHL? If they’re a scorer, and they’re not in a scoring role, do they bring something else to the table? Again, hindsight, 20/20, yadda yadda, but Thompson is nailing all the boxes right now.
And while nobody likely expected Thompson to be THIS good, there were quite a few believers. And now he’s shining bright.

Abolish the rules (for three-on-three overtime)

The NHL’s implementation of 3-on-3 overtime has been tremendous. It’s created so much electricity over the extra frame and we’ve seen some dazzling moments — especially those who get to watch Connor McDavid and Leon Draisaitl.
But Daily Faceoff’s Mike McKenna wants to see it taken a step further: he wants the league to institute pond hockey for overtime. Here’s some of what he wrote about it:

Tradition went out the window long ago: it’s time for the NHL to institute pond hockey in overtime.
That’s right. No blue line. No center red line. No offside rule. No icing. Just drop the puck and let the best players in the world take over.
Now, I want to be clear on something before people start to freak out. There still needs to be officials. I’m not advocating for utter lawlessness. I think the referees should be able to assess penalties if necessary.
But I’m over trying to police the game when there are only six skaters and two goaltenders on the ice. Why bother with lines? Why does the offside rule even exist when the whole point of overtime is to determine a winner?
Don’t get me wrong. I’ve come to enjoy the shootout. It’s a novelty reserved for the regular season. And I loved the challenge of it when I was playing.
But I think the shootout should be the absolute last resort when it comes to finishing a hockey game. And I’m willing to take things to the extreme.
If the NHL were to open up the entire ice, I guarantee more games would finish with a hockey play. Isn’t that what most fans want anyway? I sure do. And I know countless former alumni feel the same way.
So why do we cling so hard to tradition? The NHL has already gone to three-versus-three in overtime. Why is taking away the lines a step too far?
I don’t think it is. But plenty of people seem to disagree.

One of the NHL’s most electric defenceman of the last decade is being honoured by the Montreal Canadiens. The Habs are bringing home P.K. Subban.
Drafted by them in the second round of the 2007 draft, when Subban was at his peak in the early-to-mid 2010s he was one of the best defencemen in the league. He won the Norris Trophy at 23 years old in 2012-13 after scoring 38 points in 42 games and he finished as a top-three finalist two other times.
Unfortunately, the fall-off towards the end of Subban’s career was steep and last year was his final NHL season.
On January 12th, the Habs will honour him with what they’re calling the “P.K. Subban Homecoming” tribute.
“We are thrilled to welcome P.K. back to his first NHL home this January,” said Canadiens owner, president, and CEO Geoff Molson. “We look forward to giving our fans a chance to celebrate his career and the impact he had – and continues to have – on the Montreal community. Whether it’s kids on local minor hockey teams choosing to wear No. 76, or the number of fans we see on any given night at the Bell Centre who still proudly wear their Subban jerseys, you don’t have to go far to understand the influence P.K. had on the popularity of the sport in Quebec.”
Zach Laing is the Nation Network’s news director and senior columnist. He can be followed on Twitter at @zjlaing, or reached by email at zach@oilersnation.com.
Featured
Nation Takes
Oilers Talk
Recent articles from Zach Laing