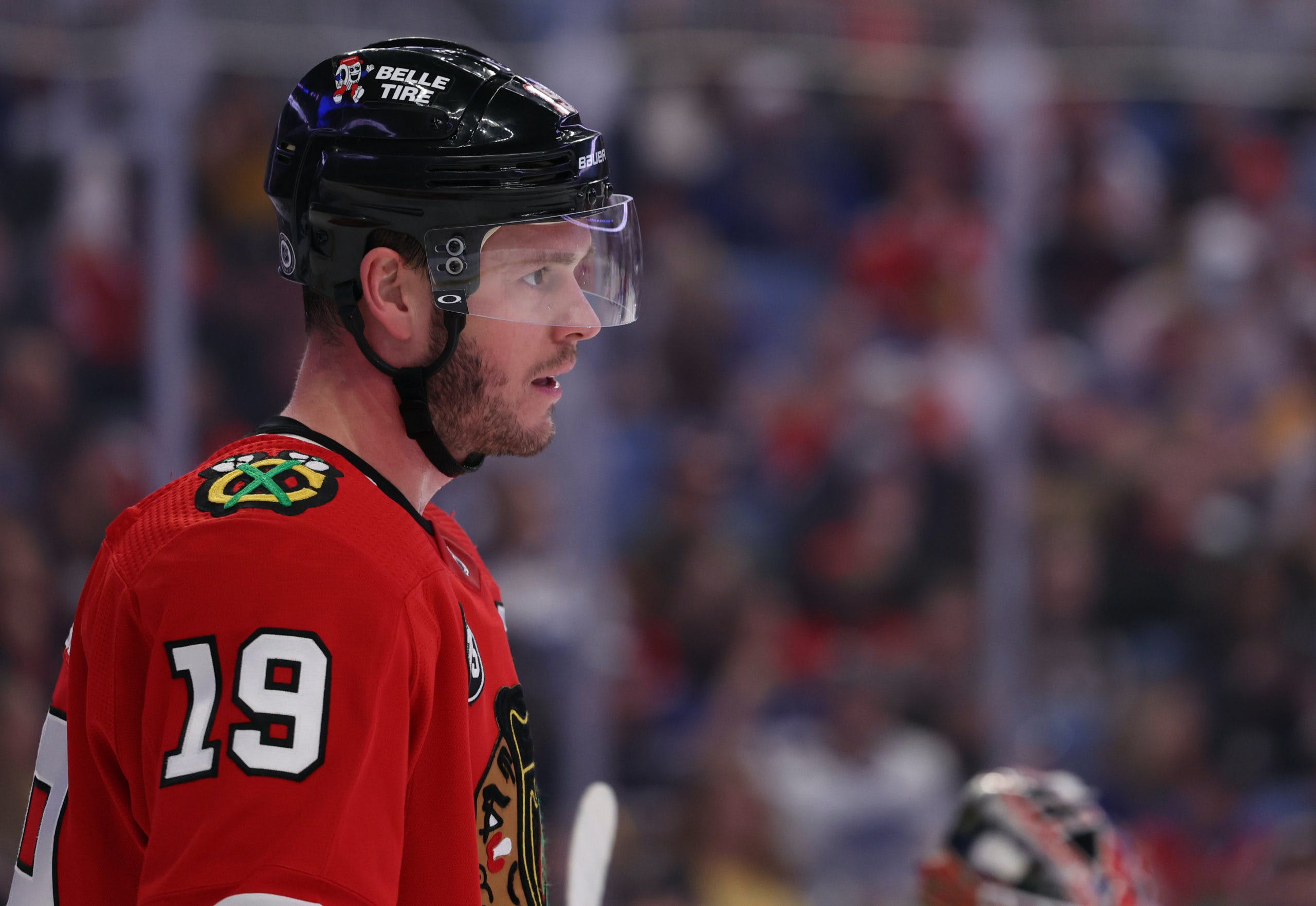 By Zach Laing
3 months ago
Lots going on around Edmonton these days.
Sportsnet’s Elliotte Friedman and Jeff Marek put out some NHL previews on their 32 Thoughts podcast and a few interesting names were linked to the Oilers: John Klingberg and Jonathan Toews.
Right off the top, the important thing to note here is the salaries. As we all know, Edmonton’s in LTIR hell so this/these notes could be chaotic. Klingberg carries a $7-million hit this year, while Toews is all the way up at $10.5-million.
For the Oilers, it would almost certainly require a third team to join in the deal to be able to eat salary on either of the pending UFAs.
In terms of Klingberg, we already know the Oilers had been in on him before he signed in Anaheim. The interest is there, but the Oilers’ right-side is already fairly clogged up with Cody Ceci, Evan Bouchard and Tyson Barrie. Flipping Barrie and his salary for Klingberg would make a ton of sense and a move I’d make in a heartbeat.
Toews would require some more work. What could make sense is having Chicago and a third team each eat 50% salary bringing his hit all the way down to $2.625-million. Warren Foegele has a $2.75-million cap hit. You can figure out the rest of it.
I talked about these this morning with Tyler Yaremchuk on Oilersnation Everyday.

This is an interesting one.
The Oilers released Jason Demers from his PTO the other day, but he was practicing with the club on Tuesday morning.
According to Daily Faceoff’s Frank Seravalli, Demers is expected to sign an ATO with the AHL’s Bakersfield Condors. I think the Oilers are giving Demers a chance to feel out offers and options from other teams around the league. From my perspective, signing him to a one-year deal and passing him through waivers makes the most sense. He’s a solid No. 8, and the Oilers will need the depth.

He’s baaaackkkkk!
The Calgary Flames once again, signed defenceman Michael Stone to a one-year contract.
Here’s some of what my colleague Ryan Pike wrote at Flamesnation:

Canucks use every cent of cap space

In what might be a first in the salary cap era in the NHL, the Vancouver Canucks used every single cent of their cap space.
That’s right. Every cent.
With a lineup of 22 active players, the Canucks utilied their cap space and LTIR perfectly.
Here’s some of how they did it, as written by Stephen Roget at CanucksArmy:

With Ferland on the LTIR, the Canucks are at 22 players to start (13 F, 7D, 2 G), albeit with absolutely no wiggle room, cap-wise. What they’ve done is essentially regained full use of the maximum $82.5 million in cap space, and they’re using all of it. Fortuitously, if Di Giuseppe ends up being out long-term, his $146,250 SOIR hit gets added to the $3.5 million in relief, too. Assuming that happens on Wednesday, that extra bit of space is all the Canucks would need to swap Klimovich back out for Karlsson, even though Karlsson now comes with his $82,500 in potential performance bonuses added to his cap hit. Further call-ups will require further placements on LTIR.
The Canucks also wind up with a Performance Bonus Pool of $2,165,000, an amount that should be plenty manageable given their sudden abundance of maneuverability.
It was, we can’t stress this enough, an absolute master class in cap management. The perfect shot. Everything, from the Riley Stillman-for-Jason Dickinson exchange to the number of days Di Giuseppe spent on the roster, factored into nailing this so hard, and they did it.
Credit and kudos are due to the entire Canucks’ front office, with the first and loudest probably deserved by AGM Émilie Castonguay, a former agent who was brought on for her deep understanding of NHL contract law and has now plainly delivered.