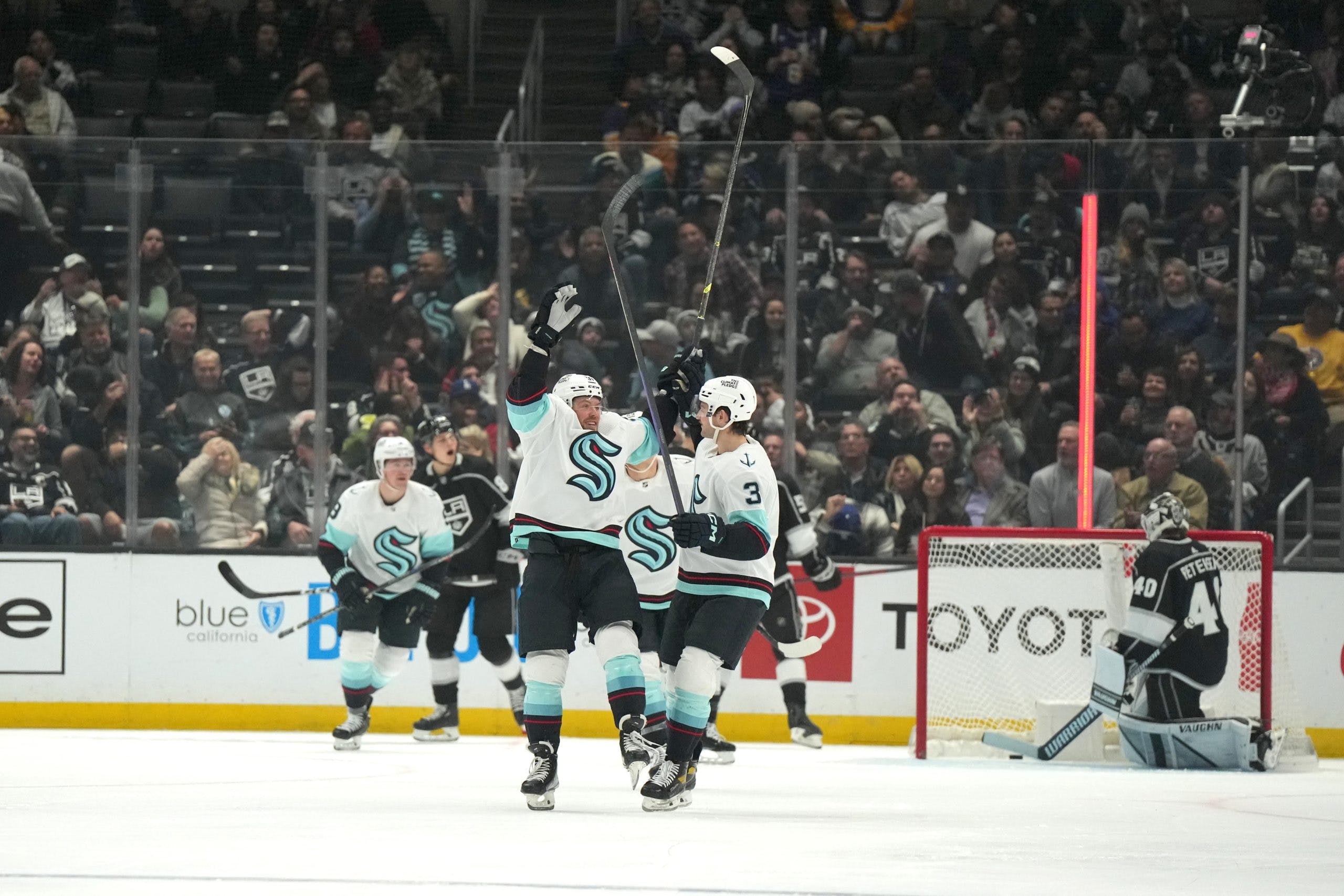 By Cam Lewis
1 month ago
The early favourite for the wildest game of the 2022-23 NHL season went down on Tuesday night as the Seattle Kraken rolled into Los Angeles and beat the Kings by a score of 9-8 in overtime.
The 17 combined goals between the two teams matched the highest-scoring game of the 21st century and Martin Jones became the first goaltender since 1991 to allow eight goals in a game and still come out with the victory.
On Wednesday, the Kings placed goaltender Cal Petersen on waivers…
Jonathan Quick started the game, allowed five goals on 14 shots, and was pulled in favour of Petersen early in the second period. From there, Petersen allowed four goals on 16 shots and was credited with the loss, as the Kings tied the game in the third period but wound up losing in overtime.
Petersen is in the first season of a three-year, $15 million contract that was signed back in September of 2021 following what appeared to be a breakout performance. He put up a .911 save percentage in 35 games during the pandemic-shortened 2021 season but has struggled since, posting a .890 save percentage over 47 games between 2021-22 and 2022-23.
Given Petersen’s $5 million salary cap hit, it would be shocking if anybody grabbed him on waivers. The Kings will likely bring up veteran third-string goalie Pheonix Copley and give Petersen a chance to figure out what’s wrong while facing weaker competition in the AHL.
The win was Seattle’s sixth in a row, and they’re now in second place in the Western Conference with a 14-5-3 record, behind only the Vegas Golden Knights. Last season, it took the Kraken until late January to pick up their 14th win.
Tuesday night’s chaotic win does a good job of summarizing what the Kraken’s success has looked like this season. Like last year, the team still has a terrible time keeping the puck out of its own net, as Seattle’s goalies have combined for a .889 save percentage through 22 games, but their offence has popped from one of the league’s worst to one of the league’s best.
It’ll be interesting to see if Seattle can keep this up. They improved over the off-season and there was some thought that they could find themselves as a bubble playoff team but nobody saw a flying start like this one.
We’ll get out first look at the Kraken on December 30 when the Oilers head to Seattle. They’ll then play the Oilers twice in January and the two teams will meet up once more in Seattle in March.