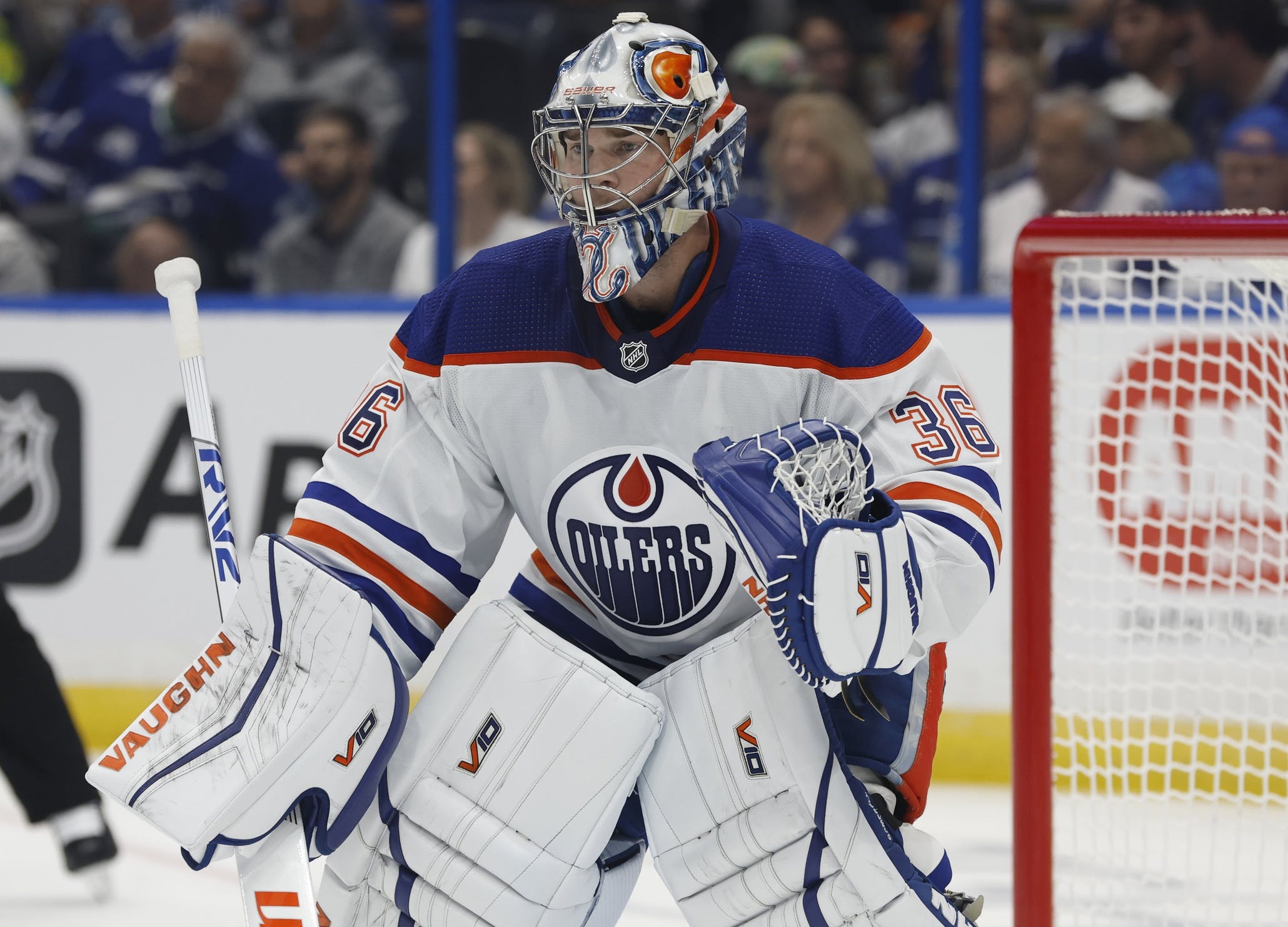 By Cam Lewis
14 days ago
It’s no secret that Jack Campbell has had a difficult start to his time as an Edmonton Oiler.
Fresh off of inking a five-year, $25 million deal in the off-season to be Edmonton’s starting goaltender, Campbell has posted an .873 save percentage in his first 10 games with his new team.
Stuart Skinner played very well for the Oilers in their win over the Florida Panthers last weekend and will surely get the start on Wednesday when Edmonton hosts the L.A. Kings. A solid performance against the Kings will likely result in Skinner again getting the net when the Oilers play a huge game against the Pacific Division-leading Vegas Golden Knights on Saturday.
This gives Campbell a much-needed opportunity to take a step back and figure out what’s been ailing him this season and what he can do to get back on track.
Over at Daily Faceoff, former NHL goaltender Mike McKenna dug into what Campbell needs to fix. A major part of Campbell’s poor start has been his confidence, as McKenna notes that his body language has gotten worse and worse as the season has gone along. Beyond the mental aspect, McKenna also notes that Campbell has allowed a handful of weak goals because his alignment has been off…

“Goaltending is all about geometry. A netminder’s shoulders and feet should – in most instances when the play is above the goal line – form an isosceles triangle with the puck. But right now Campbell is struggling with that aspect of his game. His alignment is off, and it’s preventing him from rotating efficiently and getting square to the shot.
Campbell has a nasty habit of moving his right foot forward when he sets his feet. In both instances, the Oilers netminder starts off relatively square to the shooter. But as the Nashville player gets closer, his right foot moves forward.
That leaves Campbell vulnerable to any lateral pass to his blocker side. As you can see from the video, his offset feet make it difficult for Campbell to rotate and arrive square to the shot. Even if it’s a one-timer, Campbell should be able to get his body rotated with the Oilers crest facing the shooter.
When that doesn’t happen, there’s plenty of open net to shoot at. Campbell is only able to seal the ice with his pad and cover a marginal amount of space vertically with his blocker arm. He’s reaching rather than pushing. Ideally, Campbell would arrive on time with his entire chest available to make these saves.”

Jakob Chychrun set to return from injury next week

“GM Bill Armstrong said that defenseman Jakob Chychrun and forward Nick Schmaltz will both return to the lineup on Nov. 21 when the Coyotes open a four-game segment of this 14-game trip in Nashville.
Chychrun hasn’t played an NHL game since March 12 at Boston. He had offseason surgery to remove a bone spur from his ankle. He also had surgery on the same wrist on which he had a prior procedure the summer before. Recently, he had a setback in his rehab from wrist surgery but that is now behind him.”

Chychrun is the NHL’s top trade target right now, as the 24-year-old defender indicated that he would like to be traded from the Coyotes to a contending team. The trade speculation around Chychrun will surely heat up once he’s back on the ice as teams will be more comfortable making a deal after seeing how he looks following his off-season operations.

There’s been plenty of speculation that the St. Louis Blues could sell off some players if they don’t turn things around following their poor start to the season. Among the players that the Blues could opt to trade is winger Vladimir Tarasenko, who’s set to become an unrestricted free agent next summer.
Over at TSN, Mike Johnson suggested that Tarasenko could be a nice fit for the Oilers as they seek to find somebody to replace Evander Kane’s production…

“The Evander Kane injury opens up a massive hole for the Edmonton Oilers that they will need to fill. If you’re willing to get creative, you can find a way to fit salary in there…
And even with [Evander] Kane healthy, there was still a need for one more top-six forward in Edmonton. So whether it’s Patrick Kane or whether it’s Vladimir Tarasenko, I think they both could be very good fits on the Edmonton Oilers.”

Tarasenko scored a career-high 82 points last season after having his previous two seasons derailed due to injury. He has four goals and 11 points through 14 games so far in 2022-23, which is pretty decent considering the Blues rank dead last in the league in goals.
It’s definitely too early to label the Blues as a seller but Tarasenko is an interesting name to keep an eye on if they don’t turn things around. A deal involving a player with a $7.5 million salary cap hit becomes much easier to navigate later in the season.
Featured
Oilers Talk
Recent articles from Cam Lewis