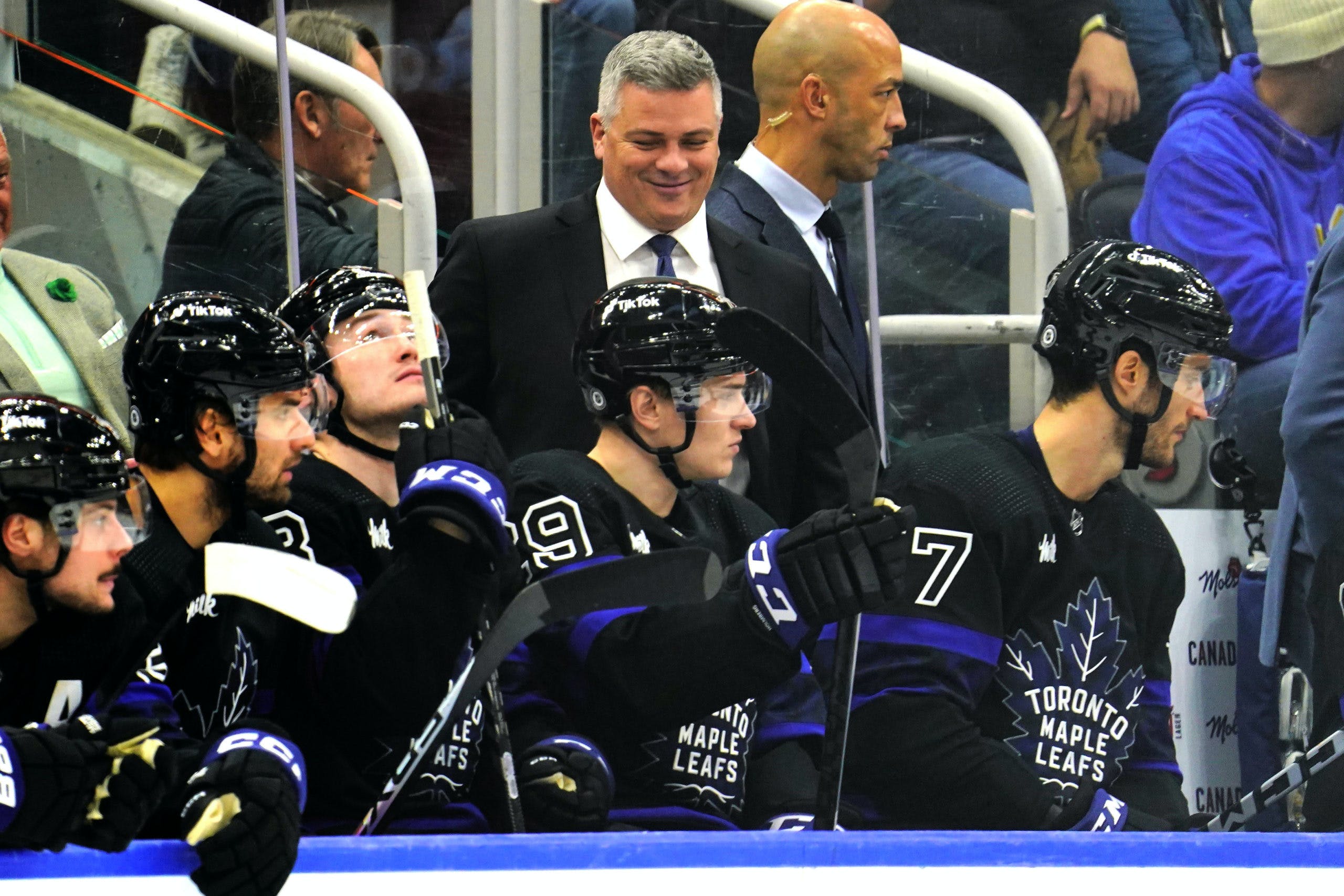 By Zach Laing
1 month ago
The NHL has levied a number of fines Wednesday to the organization and head coach Sheldon Keefe in separate incidents.
The club was fined $100,000 as a result of violating Article 16.5(b) of the Collective Bargaining Agreement. The section states: “December 24, Christmas Day, and December 26 shall be off-days for all purposes, including travel, and no Club may request a Player’s consent to practice on such days for any reason, provide, however, if December 26 falls on a Saturday and the league has scheduled NHL games on such date, December 23 may be substituted as an off-day for all purposes, including travel, instead of December 26.”
According to Sportsnet’s Elliotte Friedman, the Leafs left for St. Louis at 10:30 P.M. EST on DEc. 26th, when they should’ve left after midnight.
Keefe, meanwhile, was fined $25,000 for “demeaning conduct towards the on-ice officials” for an incident that happened during Tuesday night’s game against the Blues.

Slovakia beats US 6-3 at World Juniors

Another upset at the World Juniors as Slovakia beat the U.S. 6-3 on Wednesday. It’s the fifth time they’ve beaten the Americans at the World Juniors and the first since 2017.
Here is some of what Daily Faceoff’s Steven Ellis wrote about the game.
It didn’t take long for the Slovaks to strike first. At 2:14, Simon Nemec created the scoring chance that saw his team strike near the net. There, Libor Nemec knocked the puck over the goal line and in for the 1-0 goal.

The Americans answered back with a pair of goals, with Tyler Boucher scoring at 4:42 on a crease-crashing situation of his own. Two minutes later, Lane Hutson’s shot was tipped in by Gavin Brindley in front of the Slovak net to give USA its only lead of the game.
The United States entered the second with high hopes, but the Slovaks scored three unanswered to shake everything up. At the halfway point of the second, Dalibor Dvorsky’s shot on the power play made it 2-2, only for Robert Baco to give his team the go-ahead goal a minute later. At 33:20, Filip Mesar’s shot was tipped in by American forward Charlie Stramel to give the Slovaks a surprising two-goal lead, changing the dynamic of the contest.
Perhaps the most talked-about moment was the game misconduct to Kenny Connors. He was given a five-minute major and a game misconduct for his hit on David Natny, which resulted in Natny hitting the boards hard with his right shoulder. Natny finished the game, and the Americans ultimately killed the major penalty.
USA couldn’t get enough high-quality chances on Slovakia’s Adam Gajan, and they eventually paid the price once their defense broke down again. This time, Jozef Kmec sent Peter Repcik down the ice with under 10 minutes to go and he outmuscled Luke Hughes to create the chance, but Kaidan Mbereko made a big pad stop. Unfortunately for him, the puck bounced out and hit Hughes’ shin pad and in, giving Slovakia the 5-2 lead.
The Americans upped the ante late with a power-play goal. At 55:08, and with the empty net, Boucher got his second of the night after Cutter Gauthier’s shot was stopped by Gajan, but directed to Boucher in front of the empty cage. The Americans came close to scoring a fourth goal while holding sustained pressure, but Gajan was up for the task and shut USA out in the closing minutes. Jozef Kmec finished off the scoring, putting one in the empty American net with 1:06 left to finish things off.

The Philadelphia Flyers placed goaltender Carter Hart on the injured reserve Wednesday. It comes days after Flyers rearguard Rasmus Ristolainen shoved Carolina Hurricanes forward Seth Jarvis into him.
Here’s some of what Cam Lewis wrote about it:

There’s no indication yet about how long Hart will be out. In the meantime, the Flyers will likely operate with a goaltending tandem that features Felix Sandstrom and Samuel Ersson, who have a combined 15 games of NHL experience between the two of them.
Sandstrom was Philadelphia’s third-round pick in the 2015 NHL Draft. He played five games for the Flyers last year and has played nine this year and has an .897 save percentage in the NHL. Ersson was the team’s fifth-round pick from the 2018 NHL Draft and he allowed five goals on 30 shots in relief of Hart last week against Carolina.
Hart has been one of the long bright spots on a struggling Flyers team this season. Through a league-leading 27 starts, Hart has a .911 save percentage. The 24-year-old Hart has one more season after this one left on his three-year, $11.937 million contract.