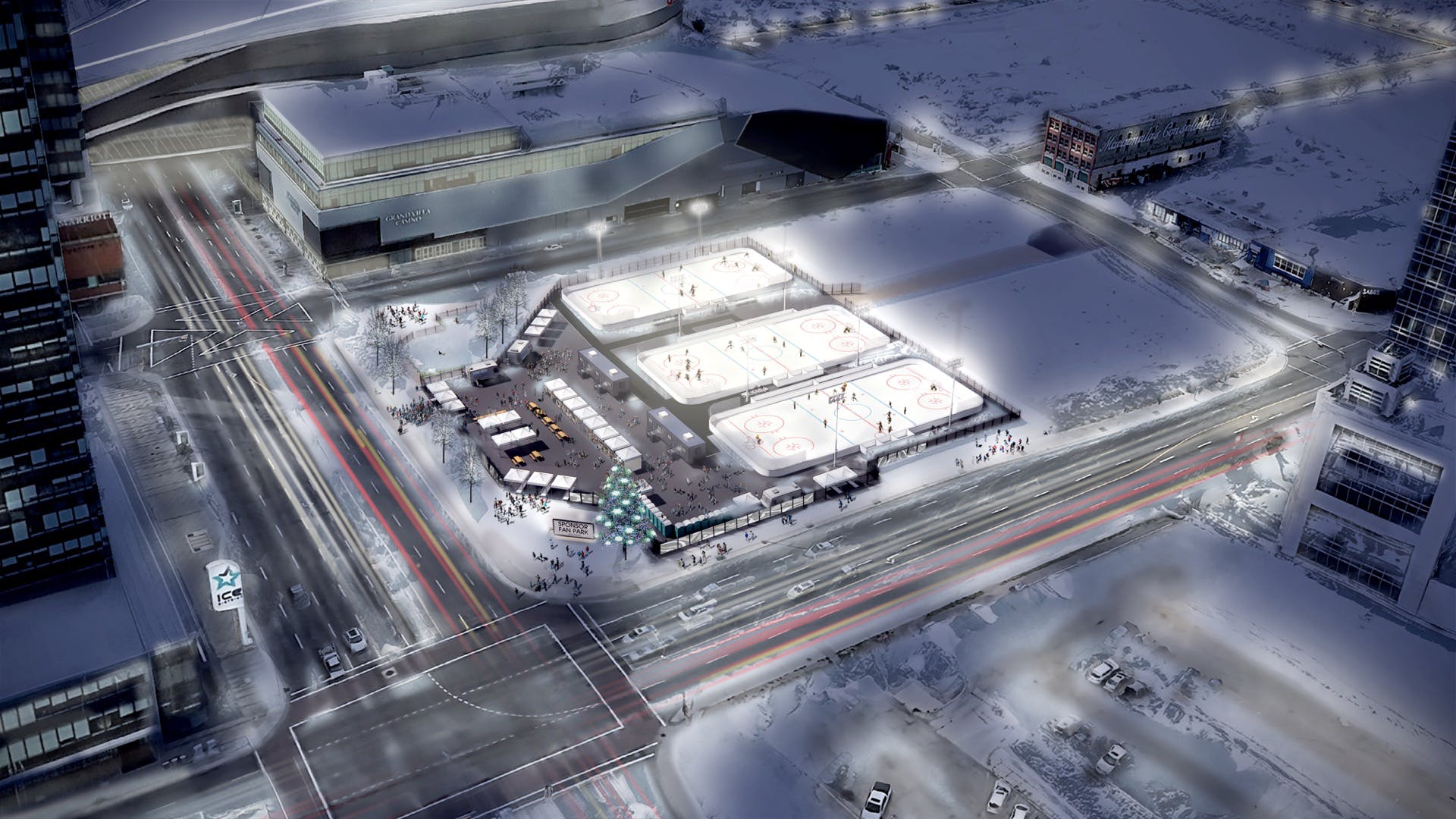 By Zach Laing
1 month ago
The Oilers Entertainment Group has announced a new fan park set to be built beside Rogers Place downtown.
Being built on the parcel of land directly east of the arena, the fan park is set to be a programmable space “designed to accommodate festivals, sports and a variety of other events that celebrate the uniqueness of Oil Country, its citizens and Downtown Edmonton.”
OEG says that public events, exhibitions, live entertainment and youth hockey — with ice rinks in the winter and ball hockey in the summer — will allow the space to be used year-round.
“By offering a safe, dedicated space to gather and play, we are creating an opportunity for increased vibrancy and new and unique events further enriching Daryl Katz’s vision of ICE District as the place for people to gather in Edmonton’s downtown,” Stu Ballantyne, president and COO of Rogers Place and ICE District said in a statement. “We look forward to welcoming Edmontonians down to ICE District’s new Fan Park for a wide range of concerts, festivals, sporting events and other year-round entertainment for the whole family.”
Construction on the park is currently underway and plans will allow the first event to be held later this month.

The Vancouver Canucks will have to adjust to life without Thatcher Demko for the foreseeable future.
While Demko hasn’t had the sharpest season this year, he went down with a non-contact lower-body injury Thursday night against the Florida Panthers. Now, he’s expected to miss at least six weeks.
Demko’s posted a 3-10-2 record and a .883 save percentage this season. Spencer Martin, who has posted a 6-2-1 record with a .900 save percentage, is expected to assume the starters’ role.

Who will be the biggest name dealt?

It’s getting to that time of year where we start to see what teams are made of. Who are the contenders? The Pretenders. The buyers, and the sellers.
At Daily Faceoff, they held a roundtable on who the biggest name dealt might be. Matt Larkin said it would be Jakob Chychrun, while Nick Alberga chose John Klingberg. Mike McKenna went with Andreas Athanasiou, while Timo Meier was the name for Steven Ellis.
Lastly, Frank Seravalli said he felt the first big-name player could be dealt from the Florida Panthers:

FRANK SERAVALLI: I’m going to cheat a little bit, based on some of the intel that I reported last week with our first Trade Targets board of the season. I think the first big name player will be traded from the Florida Panthers. As mentioned, they must trade a player to be cap compliant once Anthony Duclair is ready to return. It sounds like he’ll be ready to go sometime around Christmas. So that seems like a worthy safe bet in terms of timing as to who will be first. Now, will he be the one who is moved? Not necessarily. Florida can move another player who earns more than Duclair on the cap. I think the Panthers have received overtures of interest on some other forwards, including Sam Reinhart, Sam Bennett and maybe even Patric Hornqvist. Stay tuned.