No one wants to hear about the Red Wings 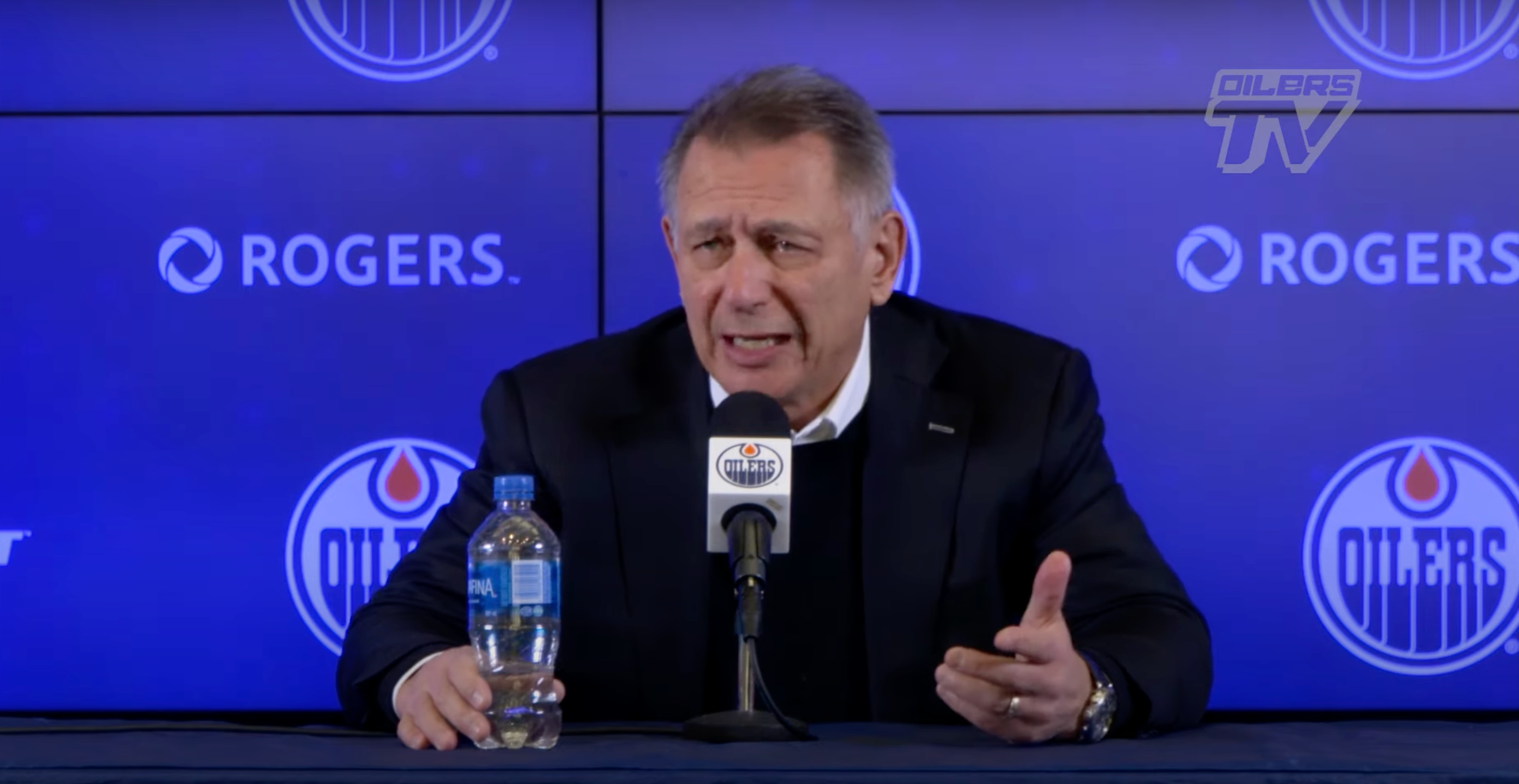 By baggedmilk
1 year ago
This morning, Ken Holland spent about 20 minutes talking to the media about what’s going on with the Oilers, and after it was over, I was left wondering what the point was even for the scribes that requested this availability. That is, of course, unless you enjoy hearing about how things worked in Detroit 30 years ago.
Before I get going here, I want to fully acknowledge that today’s presser only happened because Ken Holland’s time was requested by the media after being mostly MIA since before the season started. Seeing as it was the MSM that asked him to speak in the first place, I was by no means expecting a whole lot of new information or organizational change but even my ground-level expectations weren’t met after the exchange ended up being a word salad that was ripe with Detroit references. Instead, what we got was another dose of war stories from the good old days that are completely irrelevant — at least in my opinion — to what’s going on with the Oilers in 2022. While there’s no doubt I’m frustrated as a fan, I understood that this was not going to be a press conference that offered anything groundbreaking, but even with that knowledge in mind, I still wish we could get Holland to stick to what’s happening right now instead of wading back into the waters of how things used to be.
After racing into the season on the heater of all heaters, the Edmonton Oilers have come back down to earth and are showing themselves to be a team with a laundry list of issues and I didn’t hear any admission of that fact beyond stating the obvious difference between the October and December records. And while I wasn’t necessarily expecting Holland to reveal a whole lot in terms of how the franchise plans to solve those problems, I was hoping for more than analogies and stories that are older than the Internet itself. I was looking to be reassured that the GM is prepared to make changes above waiting to see how far things fall before the situation forces his hand rather than a walk down memory lane. If you’re not going to give any insight into what the roadmap looks like beyond preaching patience and saying “I’m not really sure where we’re at since the two extremes (hot start vs. slow December) have been so far apart” then the least you can do is offer some understanding about why people are so angry. The least you can do is say not answer Daniel Nugent-Bowman’s question about being outscored at 5v5 when Connor or Leon aren’t on the ice with a story from 1993 that has nothing to do with anything.
Knowing full well that no coaching change or trade announcement was on the horizon, I was looking for the GM to express his understanding of why this fanbase is so angry and take ownership of his share of the issues. I was looking for Holland to acknowledge that there are things that aren’t working right now and instead of putting his guard up or getting visibly frustrated with some very basic questions from the media, to explain why we should still be buying into his plan. I wanted him to explain why we should be patient with him when a GM like Bill Zito has made more significant changes/progress in his organization in less time. I was also looking for him to take ownership of a team that’s nowhere near good enough in Connor McDavid’s seventh NHL season instead of pointing to COVID or injuries or any other issue every NHL team is facing right now. Even though I absolutely agree with Holland that the Oilers are better than the 2-9-2 record we’ve seen over the last 13 games, the last thing I want to hear about when he’s asked about scoring issues is the 1993 Detroit Red Wings. No matter the question, no one wants to hear about another organization, and if that’s all we’re going to get from the guy in charge then I don’t really see the point in these availabilities even if the media is behind him showing up in the first place.
At the end of the day, a quick sweep of the comments section on the site or our social media shows just how frustrated the fans are and preaching patience to a group that’s seen next to no success over the last 15 years is a disaster. In his third season as the GM of this hockey team and given how much money he had to spend this offseason, I’m disappointed to hear anything less than understanding and reassurance that he’s doing everything in his power to make this work. Even though we know that the frustrations surrounding this franchise go back a long way and aren’t all Holland’s fault, Gord knows that the failures of previous regimes are his problem and I don’t know that anything we heard today helps make things better. From where I blog, at least in times like these, I’m looking for Holland to step up and get in front of what’s going on with this hockey team instead of throwing his hands up and deflecting to other causes.
I think you can tell a lot about your leadership when times are tough and I don’t know that today’s press conference offered many reasons for why we should continue to follow along even though it’s the only outcome. It’s not that I expect to know or learn everything from media availabilities, but I do think it’s fair to at least feel like we’re talking about the same decade.
Interviews/Pressers
Oilers Talk
Recent articles from baggedmilk